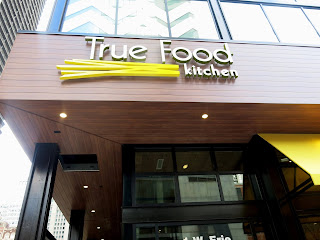 "Ugh..." Brandy moaned. She and her good friend Brocco had just attended a Christmas cookie exchange, where they had gorged themselves on sables, snickerdoodles, and sugar cookies until their teeth were vibrating. "I regret nothing," sighed Brocco, "But I have a feeling that might change later on. I guess this is why people always try to get healthy in the New Year. A whole month of this kind of gluttony can induce all sorts of latent guilty feelings." "Guilt schmilt," Brandy replied. "Didn't you make a resolution last year to eat a little more mindfully?" asked Brocco, carefully. "I did, but with the way this year has gone, I needed all the sugar, caffeine, carbs, and booze I could get my hands on. The stress of the Cubs being in the World Series alone had me cleaning off the whiskey shelves at the grocery store." "Well, let's make a deal to start fresh in 2017. What do you say?" Brandy hesitated.

To entice her into entering his pact, Brocco decided to take Brandy to the newly opened True Food Kitchen, a transplant from Arizona that specializes in healthy, mindful meals that are more than just low on calories. True Food Kitchen concentrates on creating dishes that maximize nutrition, encouraging the immune system and discouraging inflammation in the body, so as to give one the best kind of jump start to a healthy way of life. Of course, the mention of "healthy" food always causes Brandy to lift a skeptical eyebrow, but having had her fair share of good-for-you food that was actually quite delicious, she was more than willing to give this place a shot.

Walking into True Food Kitchen almost felt like walking into a sunlit garden, as green was absolutely everywhere. There were living plants on the booth dividers, sculpted moss graffiti on the walls, and huge windows to let in plenty of light. 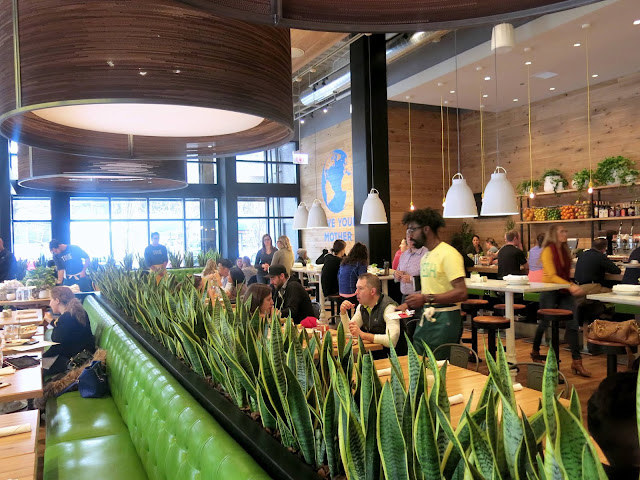 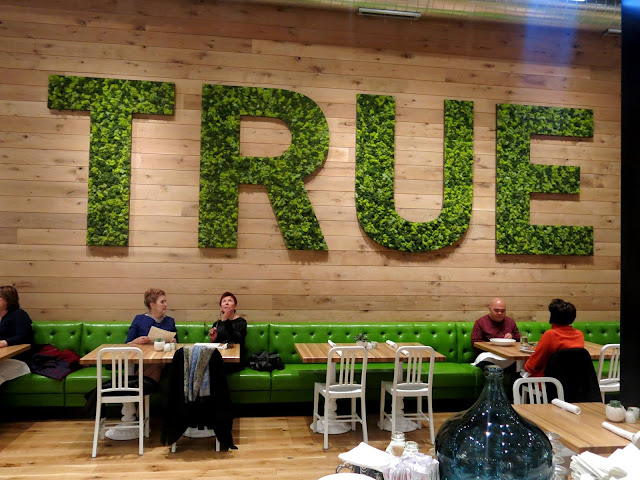 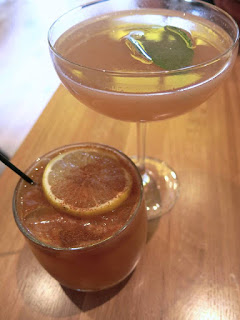 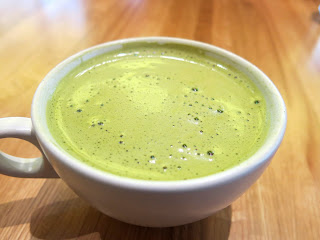 The cocktails were of great interest to Brandy and Brocco right off the bat, as they too had been formulated to be as nutritious as possible. Brocco favored the Thai Grapefruit Martini, a simple yet bright and smooth mix of vodka, grapefruit juice, and basil. Brandy went for the Autumn Orchard Sour, with apple juice, muddled pear, lemon zest, and mulled brandy, resulting in a nicely spiced cocktail that Brandy thought might have even been enjoyable hot. Not long after their drink order had been placed, Brandy suddenly realized there was something she had missed on the hot drinks side of the menu. "A Matcha Horchata?" she exclaimed. "Oh, I simply must try that! Those are two of my favorite things in the world!" She was rewarded with a frothy, spiced, silky hot cup of magical liquid that she actually enjoyed even more than the cocktail. 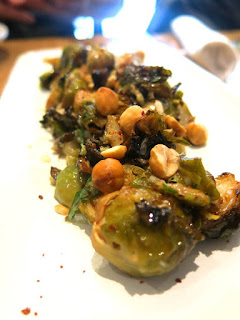 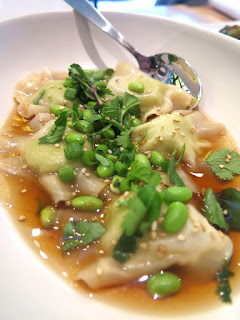 Brocco and Brandy decided to start off their meal with a trio of appetizers: Charred Cauliflower, Roasted Brussels Sprouts, and Edamame Dumplings. Brandy loved the texture on the cauliflower, which was still crisp with some deliciously browned edges, giving it a toasty yet creamy flavor with a hint of sourness. Brocco enjoyed the brussels sprouts with their unexpected brightness, which came from the addition of some artichoke hearts and golden raisins, and the slight bit of crunch from some roasted hazelnuts. Both of them agreed the real gem on the table was the Edamame Dumplings; seemingly delicate, they actually packed quite a punch of flavor from the warm dashi broth they sat in and a well balanced hit of white truffle oil. "I'm glad you suggested these because I didn't think they'd be this delicious just looking at them on the menu. I always forget about vegetables!" said Brocco. "What can I say?" Brandy replied. "I've got good instincts." 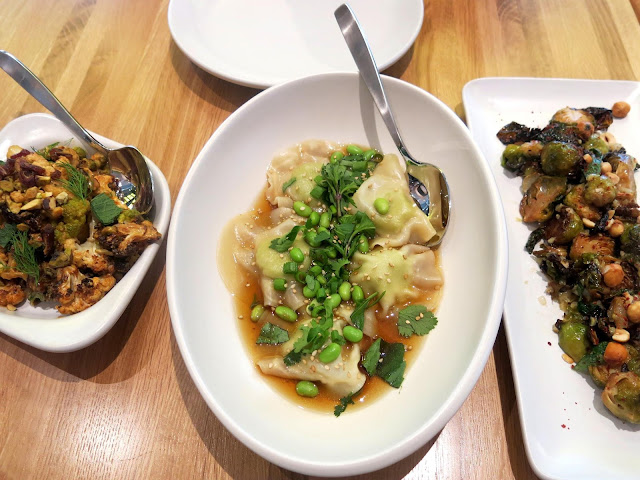 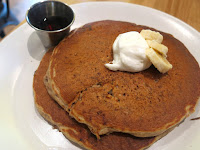 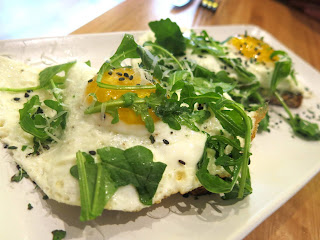 For his entree, Brocco decided to go for the oh so fashionable Smashed Avocado Toast. "I've seen these things all over Instagram, but I've never had one," he joyfully admitted to Brandy. He found the combination of the smooth avocado, the smoked gouda, the peppery arugula, and the toasty black sesame to be quite light and refreshing, but he found himself longing for a bit of starch on the side. Brocco decided to curb his craving for a little something more with an order of the Quinoa Johnny Cakes, which came dressed with sliced bananas, a dollop of greek yogurt, and some good old maple syrup. While the texture of the Johnny cakes was quite fluffy and soft, the quinoa added a nice bit of crunch to them. "They taste just like regular pancakes for the most part," said Brocco, "Which is why I wish they had a little something extra. You know, to really set them apart from your average run of the mill flapjacks." 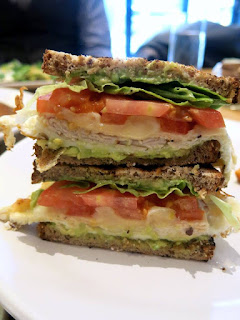 Brandy decided on the Organic Egg Sandwich, which consisted of manchego cheese, fresh tomato, roasted turkey, smashed avocado, along with an egg on a grilled seed bread, served with a side of sweet potato hash. Due to the slippery nature of some of the ingredients, the sandwich didn't quite hold together through the eating of it, which has long been a pet peeve of Brandy's, but the flavors were quite hearty, yet fresh. Brandy particularly loved the sweet potatoes on the side, which were a nice change of pace, having been prepared with some charred onions for an extra bit of flavor.

"Well, I must say, if this is what healthy eating looks like in this day and age, it's not so bad," said Brandy as she finished up the dregs of her matcha drink. "I think I could get to like this kind of thing on a regular basis," agreed Brocco, "Though with the addition of an occasional cheat day here and there." Though the food was rather tasty and obviously fairly high quality, Brandy did feel that the prices were a tad on the high side for some of the dishes, especially considering the portion sizes, but understandable once one took into account both the freshness of the ingredients and the location of the restaurant. "Well, I'd say we more than made up for that three dozen cookies we consumed the other day, This should put us back on an even keel." said Brandy. "Umm... I don't think it works that way," Brocco muttered to himself. 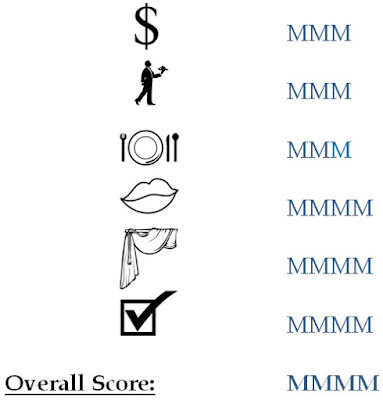