From the Kitchens of Bunny and Brandy: Breakfast Pierogi Casserole with Popkoff's 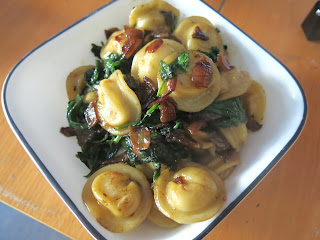 Dumplings are one of those things that turn up in almost every culture's cuisine in some form or another.  Brandy, for one, has made it her mission to try as many dumplings as possible.  From Xioa long bao to mandu to samosas and raviolis, Brandy takes a special joy in trying all sorts of exotic fillings wrapped in dough and fried, boiled, steamed, or baked.  "Dumplings might be the perfect food," she's often been known to observe, "They can be sweet or savory, they can be meaty or vegetarian.  Every dumpling is a pocket of infinite possibilities until you take that first bite." 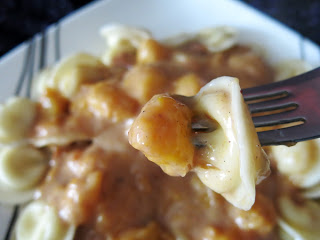 Recently, Brandy came across Popkoff's, purveyors of frozen, high quality, authentic Russian dumplings.  They carried two types of traditional Eastern European dumplings; Pelmeni (or rounded pouches originating in Siberia and resembling tortellini) and Vareniki (or half moon shaped pouches in the style of a pierogie) and each type came in a variety of taste bud tempting flavors.  With her love of dumplings spurring her on, Brandy decided to experiment with a few packages. 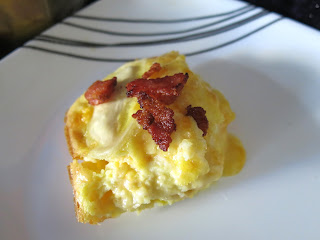 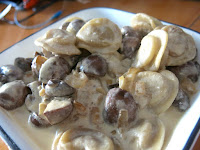 First, Brandy cooked up some of the Pelmeni.  She started off with the chicken flavor, boiling them for five minutes before tossing them in brown butter with sauted spinach and caramelized onions for a deliciously savory dinner.  The next day, she cooked up the beef variety in the same manner, and then tossed them along with some garlic sauted mushrooms and onions and some sour cream to create a lovely variation on beef stroganoff.  Following that, she looked to the Farmer's Cheese variety and stewed up some fresh peaches with cinnamon, nutmeg, butter, and cream to to make a deeply flavorful sauce, making for a brilliant and unconventional dish that would have been right at home as either a dessert or at brunch.  But saving her favorite for last, Brandy decided to create something special and yet simple with the Potato and Onion Vareniki. 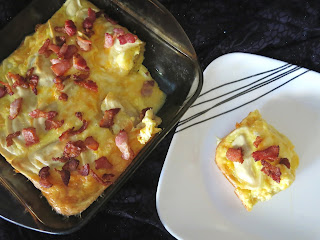 Cook the vareniki according to package instructions.  Pre-heat oven to 350 degrees.

In a medium bowl, scramble the eggs, then add the cream, salt, pepper, and cheese, and stir to combine.

Spray a 9x9 inch baking dish with non stick cooking spray, then add in the vareniki.  Pour the egg mixture over the vareniki and make sure everything is coated and level.  Bake in the over for 35-45 minutes or until the eggs are solid.  Sprinkle cooked bacon or sausage over the top, cut into squares, and serve warm.

The writers of this blog were sent products free of charge in order to facilitate the writing of this post.
Posted by Bunny and Brandy at 11:02 AM