Carmine's or Larger Than Life 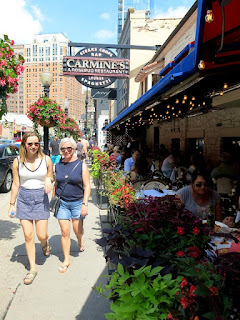 Patio season has always been an odd phenomenon in Brandy's mind.  "The people of Chicago get so excited every year to eat their meals outside," she says, "And I really don't understand the compulsion.  That is to say, I do realize how cooped up the population feels after a long Chicago winter and that any excuse to be outside feels like a blessing at first, but as the humidity seeps in and the bugs begin to swarm, I for one run straight for an enclosed and air conditioned space." 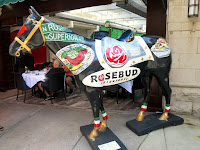 Bunny's dear friend Bailey is an example of one such person who will take any excuse to be outside during the summer.  "Let's go find a beautiful patio and have brunch!" she cheerily declared one Sunday morning.  "Must we?" Brandy whined.  "Yes.  It's beautiful outside, the sky is blue, and there's so few days like this left in the year.  Quit being such a stick in the mud!"  And so with much grumbling and rolling of eyes, Brandy agreed to a patio brunch. They decided on Carmine's in the Gold Coast, a relaxed Italian steakhouse atmosphere with a beautiful covered patio space that made even Brandy scratch her chin in appreciation.  Filled with lush green color and flowering plants, the patio space gave diners the best of both worlds with television screens and sweetly twinkling string lights along with fresh breezes and prime people watching views. 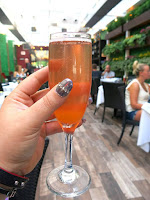 Brandy and Bailey settled in with a couple of cocktails while they planned their menu strategy.  Brandy enjoyed the refreshing and sweet Pimm's Royal while Bailey chose a classic Bellini with a nice, crisp peach flavor. 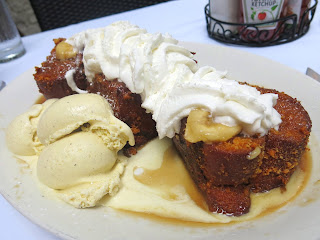 "Let's switch things up and start off with something sweet," suggested Brandy, eyeing up the Bananas Foster French Toast, which Bailey agreed to wholeheartedly.  When the French Toast appeared on the horizon however, hefted by the smiling server, both ladies gasped in amazement.  The massive sweet treat consisted of what looked to be a whole loaf of bread, sliced into three pieces, coated in a crispy breading, slathered in sliced bananas and caramel sauce, and accompanied by several large scoops of vanilla gelato.  The thing tasted just as good as it looked with a crunchy exterior and a soft, eggy, chewy interior.  The flavor was true to the banana's foster moniker with plenty of sweet, buttery, and rummy notes.  "I was originally thinking we might order some dessert to share at the end of the meal," said Brandy, "But I hardly think that will be necessary now!" 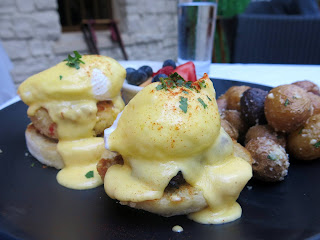 Bailey picked the Surf and Turf Benedict for her main course, with half the dish coming adorned with a crab cake and the other with a small filet.  Bailey found that the steak had a good char on it and was still incredibly tender for a thinner cut of beef.  The crab cake was indeed mostly crab with very little cake and had a bit of brightness added to it with some red and green peppers throughout.  "Whoo boy!  This hollandaise has a bit of a kick to it!" Bailey exclaimed in delight.  On the side, some simple roasted marble potatoes were a nice accompaniment, while a small bowl of fruit provided a touch of sweetness to cleanse the palate of all the rich and salty flavors. 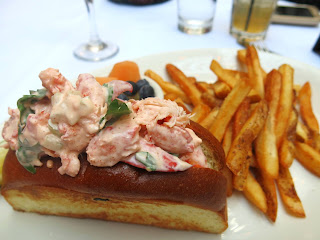 Brandy was feeling more in a lunchy kind of mood, so she went with the Lobster Roll.  She was very pleased to see that the lobster roll was composed of about 90% lobster, unlike some others she's had that are loaded with fillers like celery or potato.  The chunks of lobster were big too, and very tender and fresh tasting.  The buttered and slightly warm bun perfectly complimented the cold lobster salad, as did a sprinkle of cayenne pepper in the mayo, adding a touch of heat to liven things up.  Brandy also received a side of fruit along with some crunchy seasoned fries.  "Lobster rolls are always a bit of a gamble," she said, "But this one is certainly a winner in my book."

Perhaps it was the high quality food, the generous portions, the friendly service, or merely the indulgent weather, but Brandy found herself in a rather good mood following her brunch at Carmine's.  "Alright, perhaps there is something to this so called patio season," she begrudgingly admitted to Bailey, "But I'm still never going to be a sun worshiper."  "That's fine," said Bailey, "I'll soak in enough sun for the both of us." 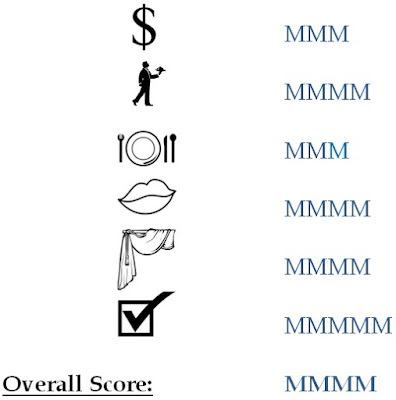