Freds at Barneys or Wham Bam Thank You Mam 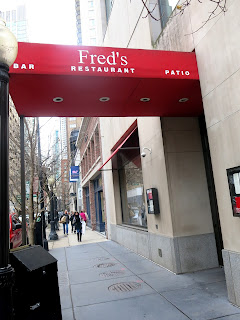 Whenever Brandy's good friend Mama Bee comes to town, she feels more determined than ever to impress her with a lavish meal.  "Oh you know me, I like simple things," Mama Bee always admonishes her, "Give me something uncomplicated and I'm happy.  Put lots of honey on it and I'm even happier."  But it has become a matter of personal pride to try and bring new and exciting culinary trends to her friend's attention, so when Mama Bee stopped in for a quick visit in between running her empire of bakeries, Brandy knew she had to come up with something spectacular.

Thinking back to a dinner she had experienced last year at the enchanting Freds on the sixth floor of Barneys of New York in the Gold Coast, Brandy suddenly remembered that the location served what was purported to be a rather grand brunch.  "If what I tried there previously was any indication, I'm sure the dishes will be classic and fresh, which might be just up Mama Bee's alley!" 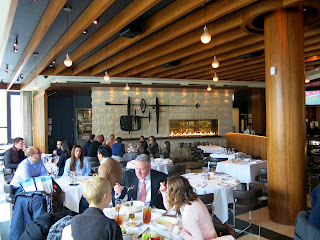 Not wanting to linger too long looking at any of the outrageously expensive purses and nick nacks on the ground floor of the department store, Brandy and Mama Bee immediately rushed for the elevator and headed up to the restaurant, which had gorgeous views of the Gold Coast.  The dining room was just as Brandy had remembered it, with a slightly old fashioned sense of class, but a less pretentious atmosphere than one might expect.  Mama Bee was especially taken with the fire feature at the back that separated the dining area from the kitchen. 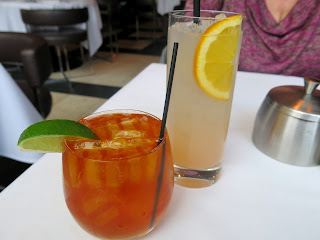 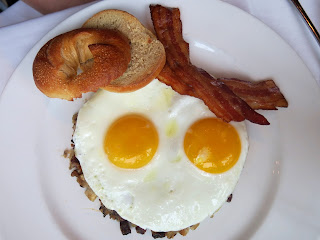 The morning began, of course, with a couple of cocktails.  For Brandy, the Border Crossing and for Mama Bee the Gary's Busey.  Both cocktails had been made with very fresh tasting citrus juices (Brandy's with lime and orange and Mama Bee's with grapefruit and lemon), but both ladies preferred the bold and refreshing Gary's Busey, which reminded Brandy of a Greyhound cocktail. 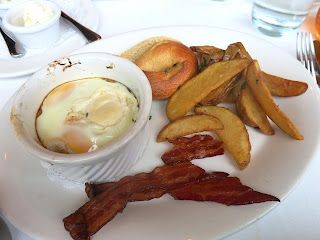 Mama Bee, a native New Yorker, eyed up the Pastrami Hash for her entree, and was especially delighted to read that the restaurant offered freshly made bagels and (even rarer in Chicago) bialys.  Sadly, when the plate reached the table, Mama Bee's treasured bialy seemed more bagel-ish, but was serviceable.  The hash was very peppery, but the pastrami was tender and perfect.  "Just what I wanted, something not overly complicated," Mama Bee smiled, "But someone needs to explain to them the difference between a bagel and a bialy." 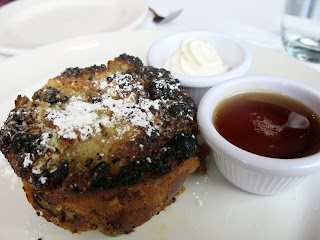 Brandy decided on the Oufes en Cocoette, a baked egg dish served with potato wedges and a side of bacon.  The potatoes had an excellent crunch on the outside while being soft on the inside, more resembling fries than a more traditional house potato.  The eggs were silky, but the true surprise was a dollop of hidden creme fraiche that really helped to liven up the dish.  "I have to say that this tastes quite a bit better than it looks," Brandy commented, "I'm rather surprised that the presentation here isn't a little more finessed, considering how obsessed a place like Barneys usually is with appearances."

Lastly came a shared order of Bread Pudding, which had actually be requested as an appetizer, but the waitress neglected to put in the order.  When the pudding finally did arrive, it seemed a little too crisped on top with an almost blackened edge.  The inside, however, was warm and scrumptious and the addition of some plump raisins ensured each bite was a little more exciting.

Though the service was friendly, Brandy felt a little let down by Freds at Barneys.  The price point seemed high, but expected for such an upscale setting, but the presentation of the dishes simply didn't live up to expectations.  The flavors, however, were good, but nothing revolutionary.  "I know you like things simple and uncomplicated, but there's something to be said for a little more attention to detail and pizzazz," Brandy said to Mama Bee.  "I agree with you there," Mama Bee responded, "But perhaps if we had purchased one of those fancy handbags down stairs before coming up here to dine, we would be spending more time thinking about the money we'd just spent and less about the meal we just ate."


The Short and Sweet Review 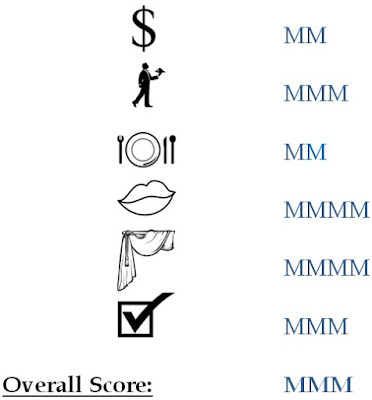