Tea Time with Brandy: Healthy Goodies for the New Year 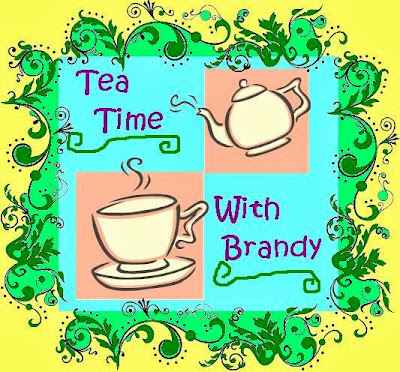 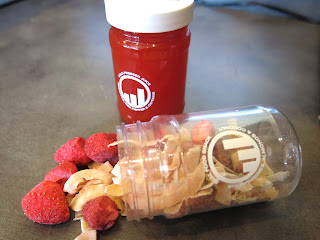 This year, Brandy is more determined than ever to stick to her resolutions, even if she denies making any.  "Just because I've decided to start eating a little healthier near the beginning of the year, it doesn't mean it's because of some silly tradition.  I just thought it was about time I start introducing some more food groups outside of bacon, eggs, and cocktails into my regular diet," Brandy huffed at the suggestion of a resolution.  But what may seem a good idea on January 1st often is forgotten two weeks into the year.  That is why Brandy has safe guarded herself by stocking her fridge with healthy choices for every meal, from breakfast, lunch, dinner, and literally everything in between. 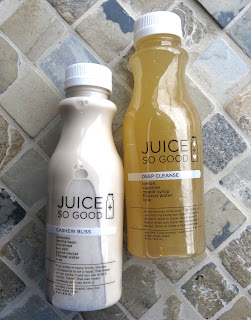 A big part of Brandy's game plan is juice.  Not that she's going for any of those super trendy all juice diets, but supplementing some of her meals with juices has been one of her long held practices.  Recently, Brandy discovered So Good Juice, a Midwest based company making non GMO cold pressed juices and nut milks in small batches that are not only nutritious, but rich in flavor.  After a raucous New Year's Eve, a concoction called Deep Cleanse, which consisted of lemon juice, filtered water, pure maple syrup, and cayenne pepper, was just the thing to get Brandy's digestion back on track.  As a sweet treat that's also packed with protein, Brandy grew rather fond of the Cashew Bliss, a shake like cashew milk with vanilla, cinnamon, a touch of sea salt, all sweetened up with agave nectar. 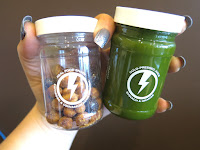 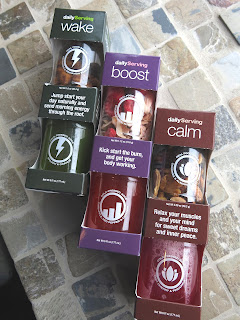 Brandy also discovered a delightful way to incorporate juices into her snacking.  Daily Serving, a Chicago based company, is cleverly pairing mini servings of hand crafted juice blends with handfuls of scrumptious munchies, all tailored to specific purposes.  Brandy likes to curb her snack cravings in between breakfast and brunch with Wake, which features some spinach and orange juice as well as deliciously crunchy cinnamon roasted garbanzo beans and dark chocolate covered espresso beans.  A combo called Boost, which featured some spicy red pepper and pineapple juice spiked with cayenne paired with a mix of almonds, toasted coconut, and freeze dried strawberries, helped to keep Brandy's metabolism and immune system running at high capacity, meaning she can keep alive her world record streak of winters spent in Chicago without catching a cold.  And when those late night snack cravings start creeping in, Brandy reaches for Calm, with sweet cherry and pineapple juice as well as dried pineapple, cherries, and almonds scented with lavender for a truly relaxing experience before bed time. 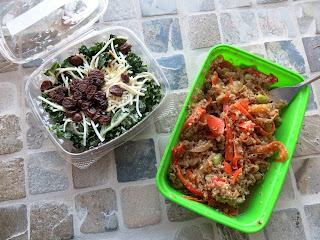 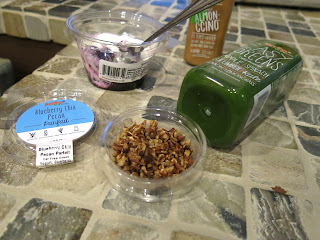 Now that she had her beverage and snacking needs met, Brandy was on the lookout for some healthier options for her day to day meals.  Remembering her visit last year to Snap Kitchen, Brandy checked into the Lakeview location and, much to her delight, discovered a whole host of new and seasonal dishes.  For breakfast, Brandy especially loved the oatmeal, which had transitioned to a Maple Roasted Banana flavor for the winter to make for a hearty and sweet beginning to the day.  A couple of yogurt parfaits in Blueberry Chia Pecan and Strawberry Coconut Almond made for a lovely accompaniment to something savory, like the Oven Dried Tomato and Goat Cheese Tart, which became another particular favorite.  For lunches, Brandy loves a bit of salad and soup, so a warm bowl of Broccoli and Cheddar soup with a Kale Caesar Salad, dressed with pickled raisins and Parmesan cheese, absolutely hit the spot.  For dinner, Brandy tried some of the newer seasonal additions, like the hearty Beef Stroganoff with spinach and brown rice noodles, the Quinoa "Fried Rice" with its bold ginger flavor and crunchy vegetables, and the Crunchy Coconut Shrimp with pineapple and jalapeno spiked Thai basil rice.  Besides the new dishes (all of which are prepared daily in Snap's local commissary kitchen and delivered to its locations in Chicago), Snap Kitchen offered its own juices and other beverages, among which Brandy particularly enjoyed the Easy Greens, which cut its vegetative flavor with sweet apple and lemon juices, the light and refreshing Matcha Mint Tea with a touch of lime juice, and the surprisingly bold Almon-Chino, made with almond milk and a touch of salt to bring out the true flavor of the dark roast coffee. 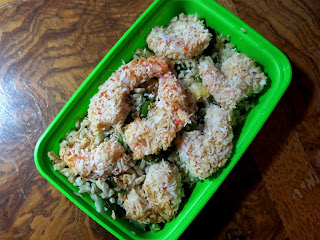 "Well, now that my fridge is fully stocked with juices and snacks and meals a plenty, I surely cannot fail in my resolve," Brandy commented proudly, "Oh goodness... resolve comes a little too close to resolution for my liking.  If anyone asks, I'm just going to say that I'm gorging myself on lots of delicious food all day, every day.  Yes, that should work.  It's not as if its a lie either."
The writers of this blog were given products free of charge by the mentioned companies in order to facilitate the writing of this post.
Posted by Bunny and Brandy at 11:07 AM