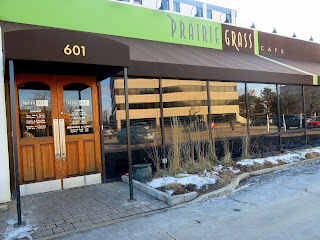 As much as Brandy loves Chicago, sometimes she does feel the urge to get out of the city.  "The eternal convenience of urban living sometimes starts to make one feel claustrophobic," Brandy explained one day to her friend Starr, otherwise known as Chicago Foodie Girl, "I do occasionally long for the space and the quiet of the suburbs or the country, especially in the winter when cabin fever starts to take hold."  Agreeing, Starr suggested they perhaps head out on a little foodie road trip to clear their heads.

Starr's suggestion was immediately agreeable to Brandy; Prairie Grass Cafe in Northbook, a spot she had stopped into last year.  Having already flirted with the food of their executive chef, Sarah Stenger last month when she visited the indoor Evanston farmer's market, Brandy was rather excited to see her style of comfort food with high quality ingredients and simplified French techniques in its home setting. 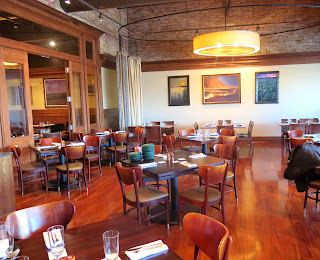 Being used to city restaurants where space is at a premium, walking into the spacious Prairie Grass Cafe was a bit of a shock for Brandy.  At the front of the restaurant was a long bar, done in natural stones, which transitioned into the dining area.  The light was plentiful and warm with soft watercolor paintings on the walls, rich wood tables and chairs that matched the highly polished floors, and stunningly large light fixtures that gave everything a golden glow. 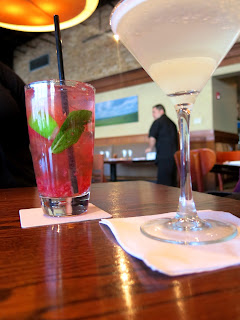 Brandy and Starr began with a pair of cocktails, of course; a Raspberry Mojito for Starr and a Nordic Nectar for Brandy.  Both drinks were crisp and fruity (Brandy's being a pineapple infused vodka) without being overly complicated. 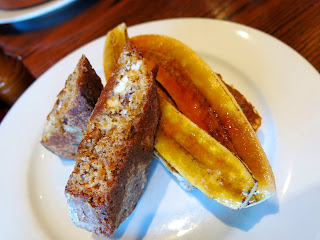 To start off with, the ladies split an order of the special of the day, Banana Bread Stuffed French Toast.  The toast came served with a perfectly bisected banana that had a thin layer of caramelized sugar on it.  Brandy just loved the tiny crisp of the sugar on the banana, which was a special treat with the dense, soft banana bread.  The filing seemed to be a cream cheese, and though it was a little overwhelmed by the richness of the toast, it was still a welcome addition to the decadence. 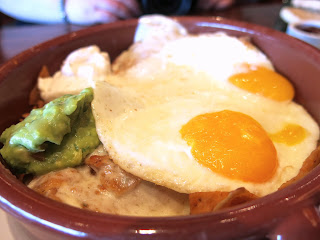 Starr went for the Chiliquiles as her main course, which came served with guacamole and sour cream.  Though the guacamole had a wonderfully creamy consistency and the two eggs on top were prepared perfectly over easy, the shear amount of tortilla chips in the dish made the thing less traditional chiliquiles and more breakfast style nachos.  "As good as this is now, I would add a bit of pork or chicken, just some sort of meat to round it out a bit," Starr commented, and Brandy quite agreed. 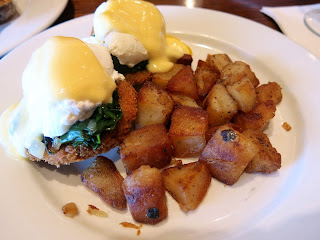 Brandy decided on the Portobello Mushroom Benedict, a twist on the traditional dish using panko breaded mushroom caps in the place of English muffins.  Brandy simply adored the crunch of the mushrooms when combined with the perfectly poached eggs and some tender sauteed spinach.  The potatoes on the side were also done nicely, with a perfect crisp exterior and just a little hint of spice.  "It's been a long while since I saw a truly innovative Benedict," Brandy mused, "Being in my line of work, I sometimes get quite bored with endless attempts to re-invent the wheel, but every once in a while, you come across something like this and remember why re-invention is a wonderful thing." 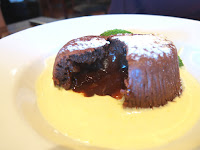 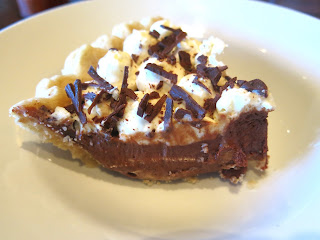 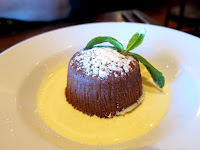 Not ready to head back to the hustle and bustle of the city quite yet, Brandy and Starr picked a duo of chocolaty desserts; a slice of French Silk Pie and a Chocolate Muk Muk Cake.  Already well acquainted with Chef Stegner's pie making prowess from seeing her wares at the farmer's market, Brandy was excited to try her take on the classic chocolate pie topped with whipped cream, and she was hardly disappointed.  The crust was buttery and tender, the filling rich and creamy like the center of a truffle, and little curls of bittersweet chocolate were the literal icing on the cake.  The Muk Muk cake was essentially a lava cake with a rich, melty chocolate center that sent Starr and Brandy's eye rolling into the backs of their respective heads.

The relaxed and delicious brunch at Prairie Grass Cafe was just the thing Brandy needed to get her mind cleared and her stomach filled.  The prices seemed fair for the quality of the food and the friendly service combined with the warm atmosphere made Brandy feel she could take her time enjoying her meal, a feeling that sometimes gets lost in busier city restaurants, where table turn over is more prized than customer experience.  "Us city dwellers can get a little jaded when it comes to the suburbs, I think," Brandy mused, "But knowing there is good food to be found even outside of the city does make me want to give these places a bit more credit.  I think some more exploration is on the docket for 2016!" 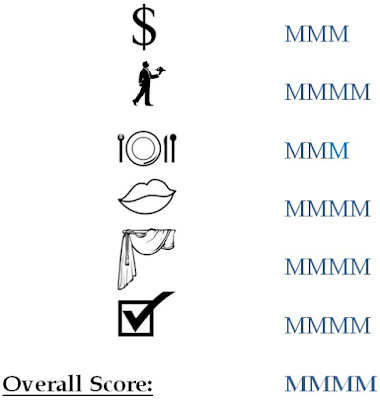