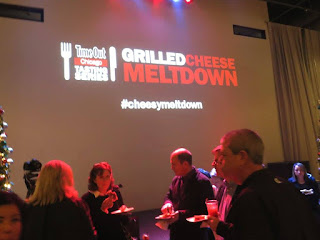 "We don't have grilled cheese in England," Brandy was explaining to her friend Hawk, who was absolutely appalled, "We have beans on toast, which some add cheese to sometimes, I suppose.  Or eggs on toast with cheese.  Or cucumber sandwiches with cream cheese, but those aren't exactly hot and melty."  "Toast isn't the same; the perfect grilled cheese is buttery and crisp, but soft and yielding on the inside.  And you can't just use any cheese, you HAVE to use something with the perfect kind of viscosity that will stay midway between a liquid and solid state, because if its dripping out the sides its no good, but if it doesn't melt at all, then its just a boring cheese sandwich."  "Alright, alright!  I have had grilled cheese sandwiches before, you know."  "But have you had a perfect grilled cheese sandwich?"  "I... don't know," Brandy had to admit. 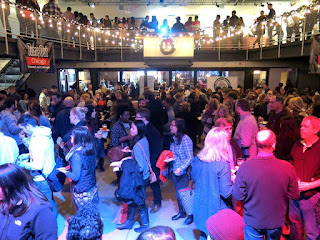 Luckily, Time Out Chicago was hosting the Grilled Cheese Meltdown, where several bars, restaurants, and food trucks would compete head to head in the ultimate grilled cheese cook off.  Determined to introduce Brandy to what made the perfect grilled cheese, Hawk brought her along to the back room of The Chop Shop early on a Saturday morning.  As they tasted their way through the room, the sandwiches quickly fell into a few categories: Traditional, Meaty, and Sweet. 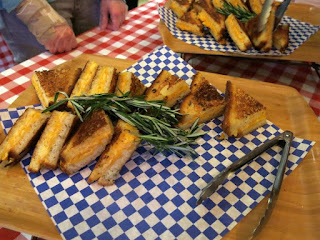 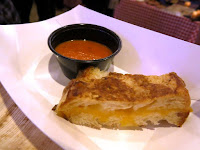 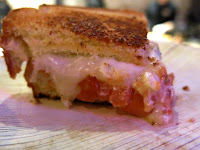 Doing a traditional grilled cheese just right seemed to be the goal of many of the participants.  Glen's Diner used Texas toast for a dryer, more sturdy bread to hold in their chosen cheese of provolone, and accented it with some fresh tomato.  Northdown Cafe and Taproom did a little innovation to their sandwich, using fontina and cheddar and then soaking the whole thing in a Scottish style ale.  Though the flavor of this one was good and Brandy especially liked the little cup of tomato soup that came with it, the beer-soaking process had rendered the bread a little spongy, which negated the crisp exterior Hawk so coveted.  Same Day Cafe made their sandwich with cheddar and smoked Gouda, but switched things up with a rosemary bread, which Brandy thought was a lovely compliment in flavor. 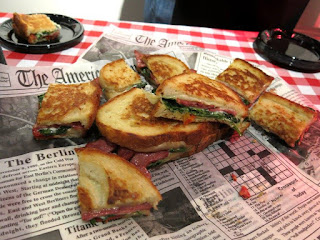 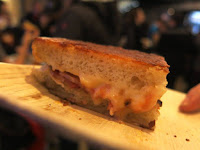 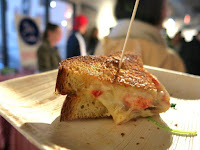 In the "Meaty" category, there was a definite trend towards bacon, which Brandy certainly didn't mind.  Lady Gregory's used four different cheeses in their sandwich, plus a Parmesan encrusted sourdough, and then added in two types of bacon, fried shallots, and roasted tomato.  This was one of the most complex sandwiches, which had purist Hawk worrying that it might have had a little too much going on, but Brandy enjoyed the contrast and richness of it.  Toasty Cheese opted to use some duck bacon in their sandwich, along with baby spinach, cherry tomatoes, aioli, and provolone, but Hawk felt the amount of meat overshadowed the cheese in this case.  "If its a grilled cheese sandwich, the cheese has to be at the forefront," he explained to Brandy.  Breaking with the norm was Happy Lobster, who presented their signature sandwich with a top secret two cheese blend and chunks of Maine lobster.  Both Brandy and Hawk were a little skeptical of this one at first, but after one bite, they were on board. 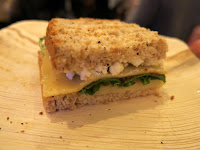 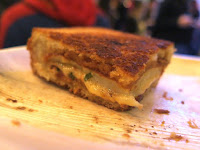 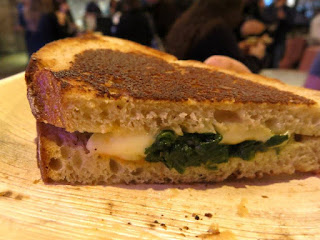 Both Brandy and Hawk's favorite sandwiches of the day ended up being those with a touch of sweetness to them.  The Fat Shallot used Muenster cheese (a choice Brandy highly approved of, as it had the ideal meltiness Hawk spoke of) along with some sauted spinach and caramelized onion, making for a rather savory mouth full that had a nice, sweet surprise to it.  Blue Door presented a sandwich using farmer's market ingredients, such as fig, arugula, Havarti, and goat cheese, which while delicious, was not so much grilled as it was slightly toasted.  "It's a lovely sandwich," Brandy contemplated, "But it's not a grilled cheese."  One of their favorites of the day (and the ultimate winner of the showdown) was Beard and Belly's sandwich with Butter Kase and cheddar cheese, tomato jam, and a brioche bun.  This made for a really ideal grilled cheese experience with a buttery, rich flavor, cut by the sweetness of the jam.  Lastly was Brandy and Hawk's favorite of the day, the Sweetie Pie from Gayle's Best Ever Grilled Cheese (a stand Brandy was already familiar with).  This sandwich, as all of Gayle's sandwiches do, featured only ingredients found at a farmer's market, right down to the butter and the bread, and included Swiss cheese, pecans, and raspberry jam.  The unique combination of the crunchy nuts, the nutty cheese, the perfectly buttery and crispy bread, and the sweet berry jam was really something memorable.  "It's got all your specifications for an excellent grilled cheese while being innovative and really tasty," Brandy said to Hawk, "I really must try re-creating something like this at home!  You know me, anything sweet and savory at the same time is going to be a winner in my book."

After their masterclass in grilled cheese, Brandy and Hawk both felt that their minds had been expanded and their taste buds educated.  "Now you know what every kid in the US grew up eating and why we love them so much," Hawk told Brandy as they waddled out the door.  "Listen, I didn't need to eat fifteen different sandwiches to understand why a warm, buttery, cheesy sandwich is so loved by Americans," said Brandy, "But it also doesn't mean I wouldn't eat fifteen more just to make sure I understand."

The writers of this blog attended this event free of charge as members of the Time Out Chicago Blogger Network.
Posted by Bunny and Brandy at 10:56 AM