If there's one thing Bunny and Brandy know better than brunch, its where to find a decent drink.  But with Brandy constantly out on the town and Bunny gallivanting across the globe, lately both of them have found themselves appreciating a good old fashioned night in.  With this in mind, they have been compiling a list over the last few months of some of their new found favorite beverages for enjoying on a cold winter's night in.  Bunny recommends that one should put on their favorite Christmas movie, a pair of warm fuzzy slippers, and snack on some lovely roasted chestnuts while enjoying these libations, while Brandy simply recommends hiding one's phone before beginning a session to avoid any wayward texts going out into the ether. 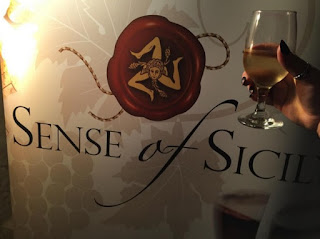 Even though red wines are more fashionable in the winter, Bunny doesn't usually pay much attention to all that and simply drinks what she likes when she likes it, such as the Pinot Grigio Moscato blend from Il Gattopardo she has been enjoying as of late.  The wine, which originates from Sicily, has a beautiful pale golden color and a smooth, citrus and floral flavor with a sweet finish.  Bunny thought this particular wine was perfect for people like her who enjoy a sweeter wine, but don't want to go full Moscato during a meal. 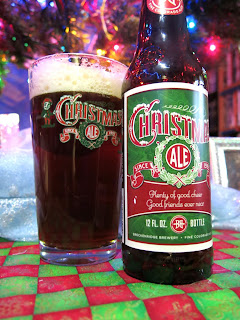 Brandy and Bunny are notorious session drinkers, as Brits are wont to be, after having been conditioned by their homeland's pub culture.  Brandy usually airs on the side of darker beers, like porters and stouts, so when she recently discovered the Vanilla Porter from Breckenridge Brewery, it was love at first sip.  The notes of vanilla really come through the velvety beer, giving it a very creamy flavor and a nutty finish.  Pleased with this discovery, Brandy delved into Breckenridge's library and found they also had a Christmas Ale, and while she usually shies away from lighter beers, this one with its rich golden color and malty, caramel flavor was a real winner in her book. 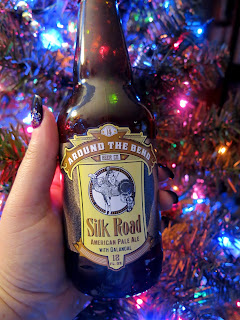 Bunny 's new found favorite beers are from Chicago-based Around the Bend, a daring brewery who are obsessed with creating classic styles of beers with innovative ingredients.  On the dark side, Bunny just loves the Puffing Billy, an American style brown ale finished with cacao nibs to compliment the roasted malt flavor.  The rich, complex taste of this one just made Bunny want to curl up next to a fire place and listen to the crackle of the logs all night while snacking on toasted marshmallows.  On the lighter side, Bunny liked the Silk Road, a pale ale that had been flavored with galangal, a root common in Thailand and often used in a favorite dish of Bunny's, Tom Kha Soup.  The root is a lot like ginger in flavor with a little more of a floral note, and it works surprisingly well in this hoppy, citrus focused beer, reminding Bunny of the oranges spiked with cloves her mother used to leave around the house in winter time. 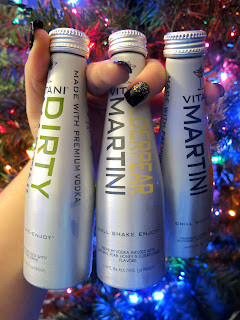 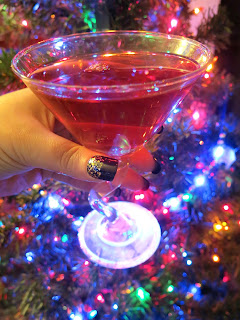 Recently, Brandy was introduced to a new brand of bottled cocktails call Vitani which proclaims to be a "bartender in a bottle."  Rather than an overly syrupy or chemical tasting concoction, the martinis from Vitani are meant to taste as though they had been mixed up behind a bar.  Coming in five varieties (including classics and more innovative combinations created by actually visiting trendy bars and talking to flesh and blood bartenders about what kinds of trends they've been seeing), Brandy quickly zeroed in on the ElderPear as her favorite, being both subtly sweet and floral.  Bunny, who enjoys more of a savory cocktail, loved the olive-y signature Dirty Martini, which as it happens was the whole reason that Vitani came to be.  It was founder Jackie Gichner who longed for a ready to drink martini, which she simply couldn't find, and thus decided to make her own.  With the cocktails all being over 30 proof, there is no question of Vitani being watered down to conform to market or manufacturing demands, and because they are all bottled in aluminium bottles, they stay perfectly chilled until ready to serve in an instant.

The writers of this blog were provided with product by the mentioned companies in order to facilitate the writing of this post.

Email ThisBlogThis!Share to TwitterShare to FacebookShare to Pinterest
Labels: Postcards from Bunny