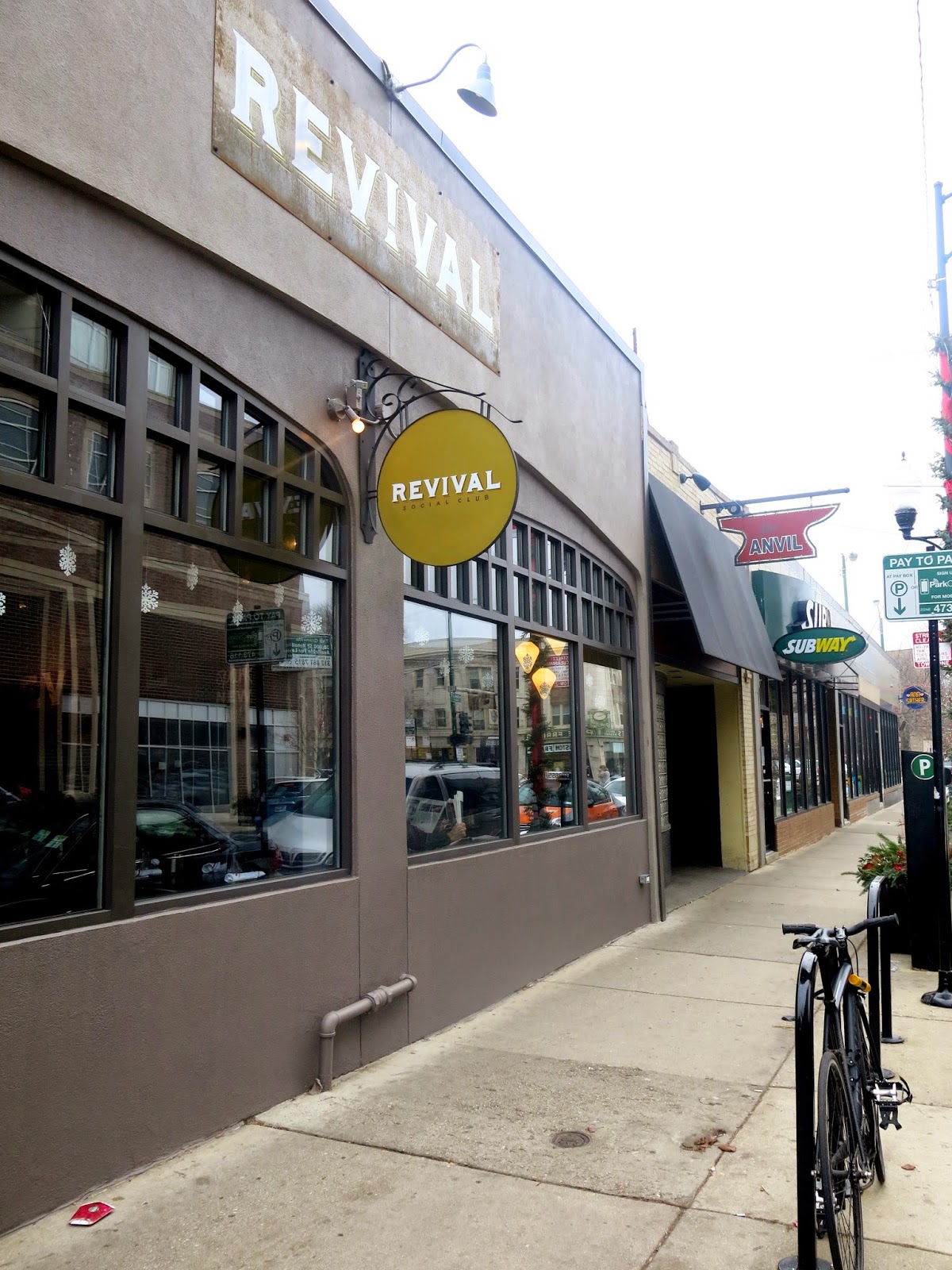 "I think I've figured out how to make a time machine," Brandy's good friend Brocco Leigh Binto (genius inventor and scientist) told her one day over tea.  "Oh?' was all Brandy could muster in response.  "It's all a matter of getting the wavelengths at the right frequency, you see?" Brocco tried to explain, "You just have to isolate the exterior timeline from the interior timeline so that you can have a living organism traveling through the fourth dimension without it effecting that organism's bio-molecular make up, you see?"  "Um... of course."  "Of course, I'll need to apply for some grants to develop the right kind of equipment, but I'm sure that won't be hard.  So, where would you want to travel to in time?" "Excuse me?" "You could be the first time tourist!  Name any era, any place, and I can send you there."  "Why wouldn't you want to be the first time tourist then?" "Well... someone has to operate the equipment, of course."  "Of course.  Well, if I must be your guinea pig, I suppose we'd better start off easy.  Why don't you send me back four years ago to Bunny and I's very first Chicago brunch?  I'd be interested to just how educated my palate has become since then."  "You've got it!  Where was your first brunch?"  "It was at M. Henrietta.  Oh... I still dream about the beautiful little baked egg and that delectable bread pudding..." Brandy trailed off.  "Stay with me," Brocco said, snapping his fingers in front of Brandy's face, "Can we go there to collect the exact coordinates?" "Sadly, the lovely place is no more.  However, I've heard there's a new restaurant there, and they do serve brunch..." "Then what are waiting for?  Let's go!" 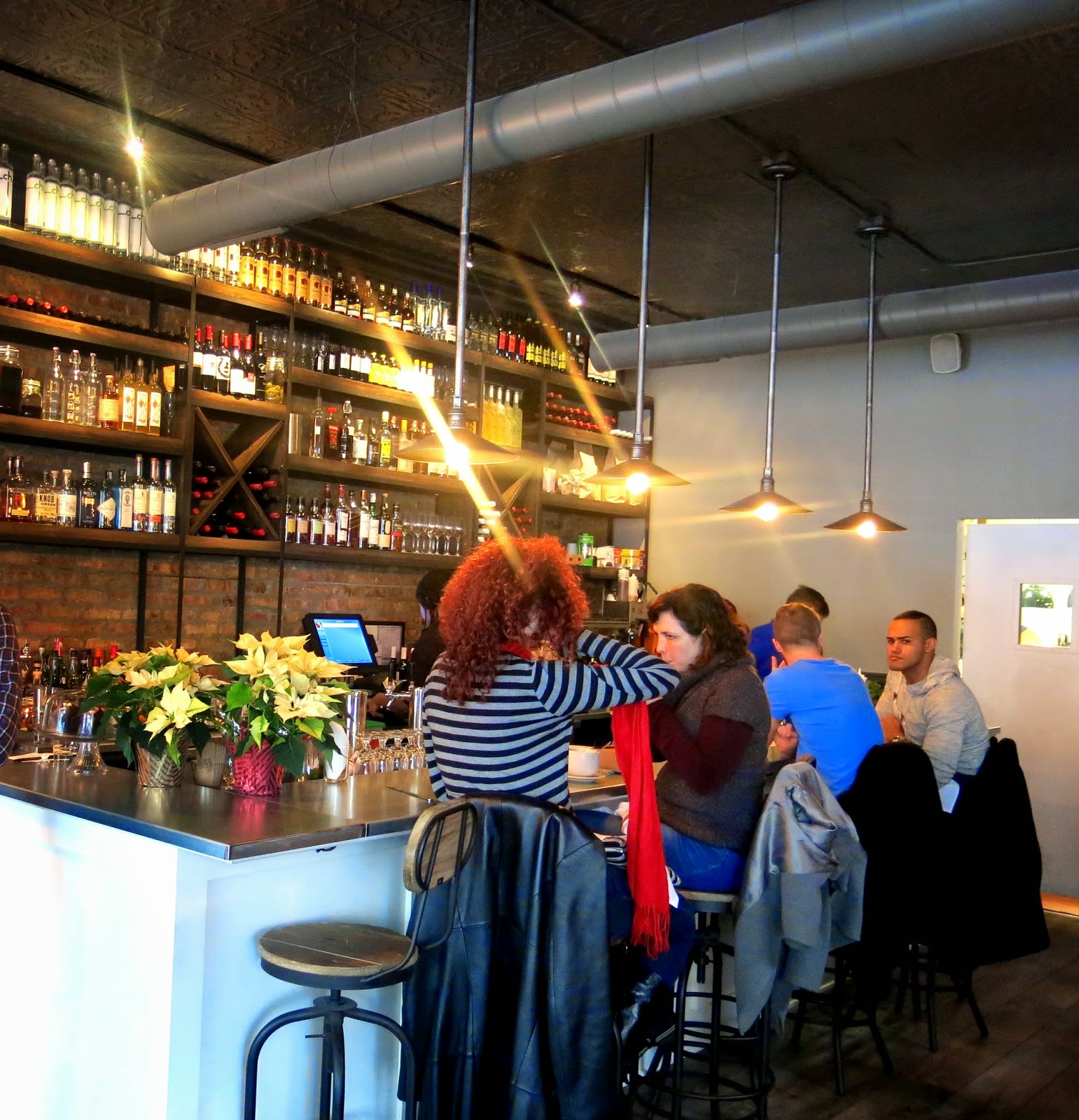 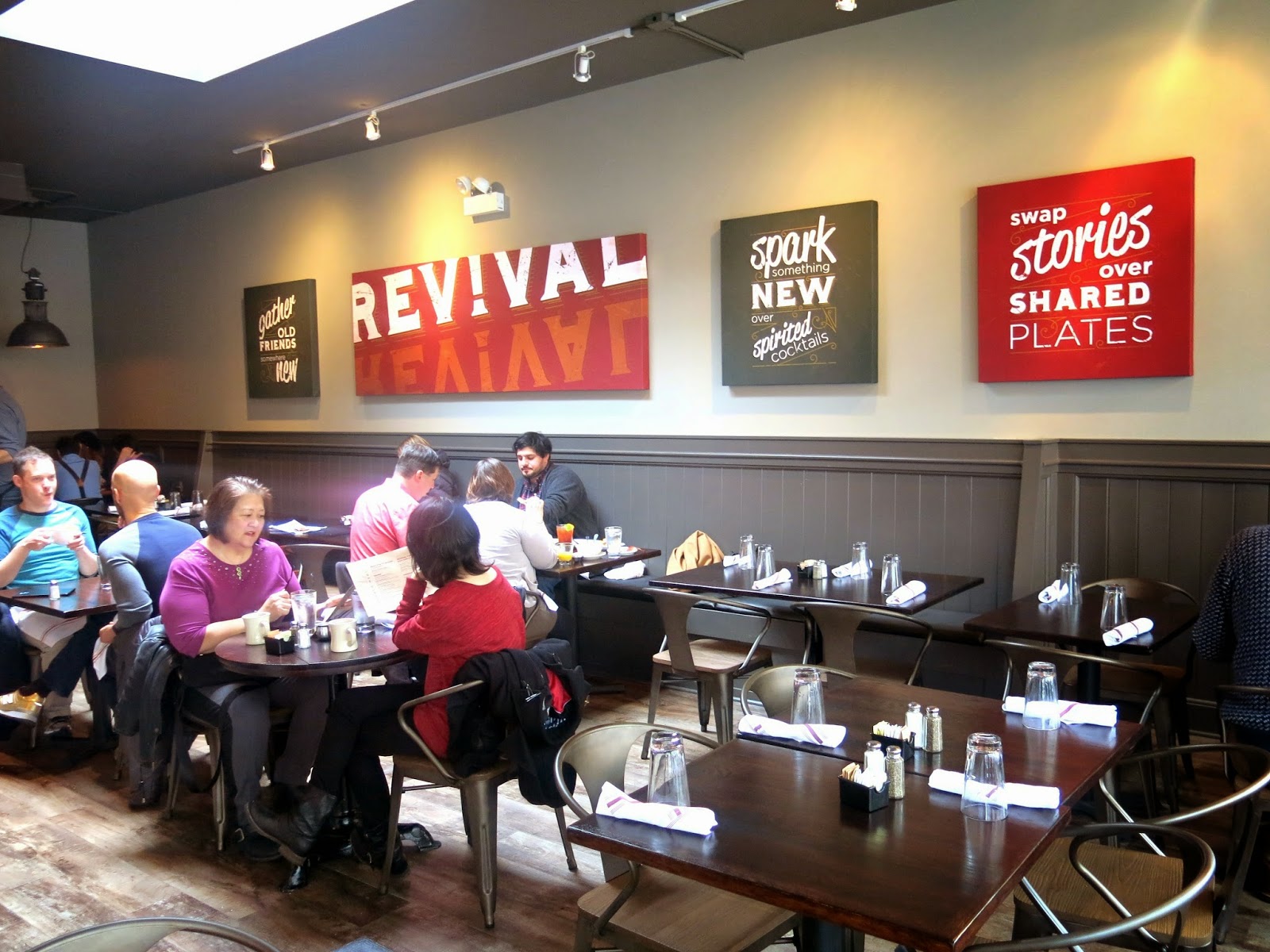 The restaurant that had taken M. Henrietta's place just off the Granville Red Line stop was called Revival Social Club.  Though the outside was familiar to Brandy, the inside had had several changes from its predecessor; the once butter yellow walls had been painted a more sleek grey color, a bar had been constructed on the eastern wall that was not only stunning architecturally, but also utilizational for storage, and the whole dining space had been opened up and decorated with graphic canvases that lent the place the air of a speakeasy.  "I'm not sure if we've just traveled into the past of the future!" Brandy declared, stepping into the place. 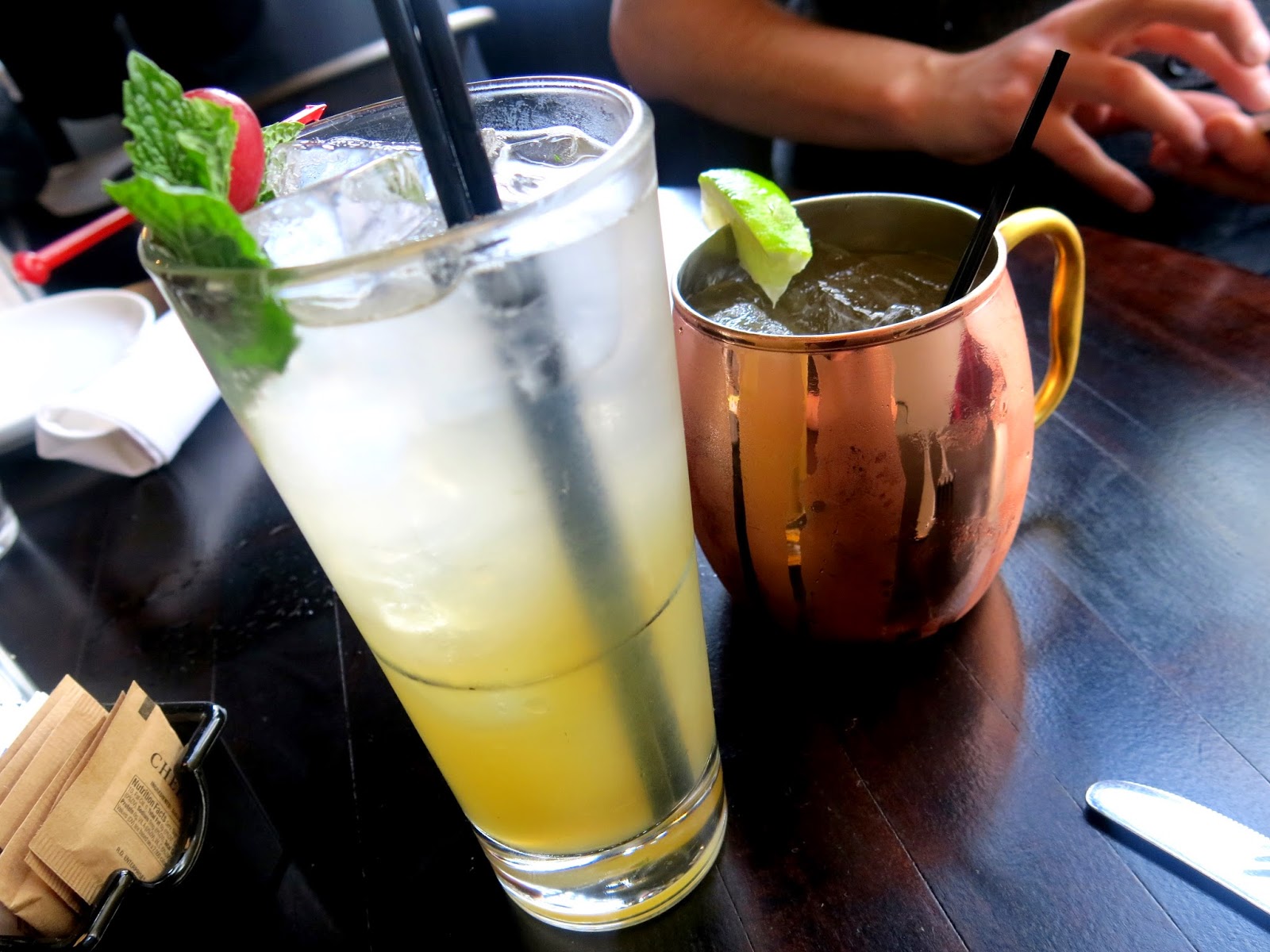 The pair of friends started off with some drinks: the Southern Decadence for Brandy and the Kentucky Mule for Brocco.  Brandy loved seeing the original twists on classic cocktails that pervaded the menu, as well as some very original concoctions made with Dark Matter coffee (but we'll get to those later).  Brocco did like his Kentucky Mule, which was made with bourbon instead of the traditional vodka, thinking it had a nice effervescence to it while being simultaneously smokey and citrusy.  "That's not a flavor combination you see every day," he said, taking some sort of dodad out of his pocket and scanning the drink.  Brandy's drink, the Southern Decadence, was constructed from it's name sake tea from Rare Cellar Tea, some vodka, soda, and garnished with a grape and some fresh mint.  Brandy liked that it was nicely light, sweet, and refreshing, but still with a rather sophisticated herbaciousness from the mint.  "It's good, but probably more of a summer drink," she admitted. 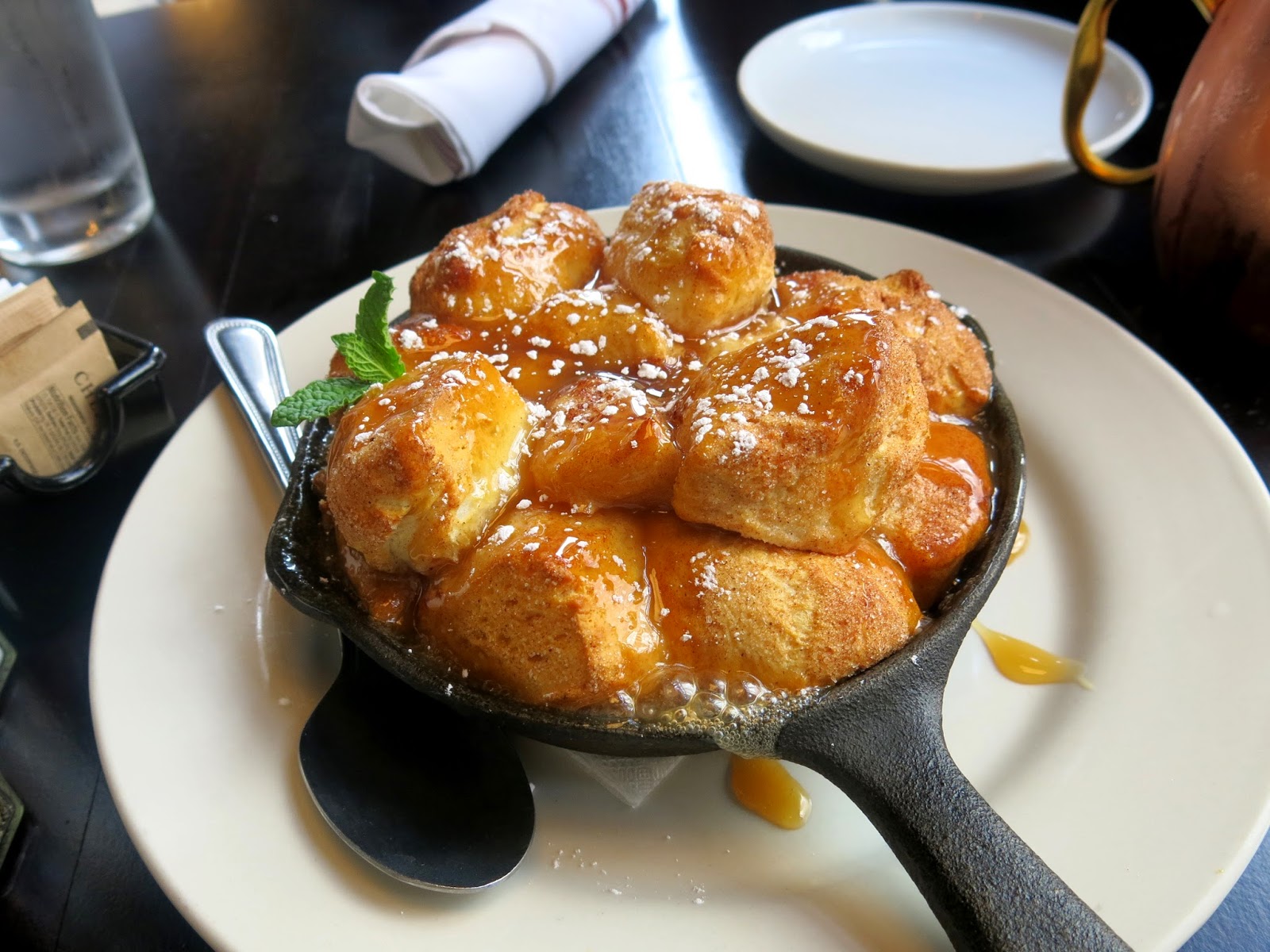 The meal began with the Iron Skillet Monkey Bread (Brocco heard about half of the smiling waiter's description before he asked for an order of the confection).  The two bite sized balls of dough came warm to the table, a bourbon caramel glaze bubbling around the edges of the skillet.  The bread like spheres were light and airy on the inside, and while the glaze was sticky and sweet, it didn't overwhelm the dish.  "I might use my time machine to go back and eat this again," Brocco moaned, scooping up the last little dough ball.  "Or you could, you know, just order another..." Brandy suggested. 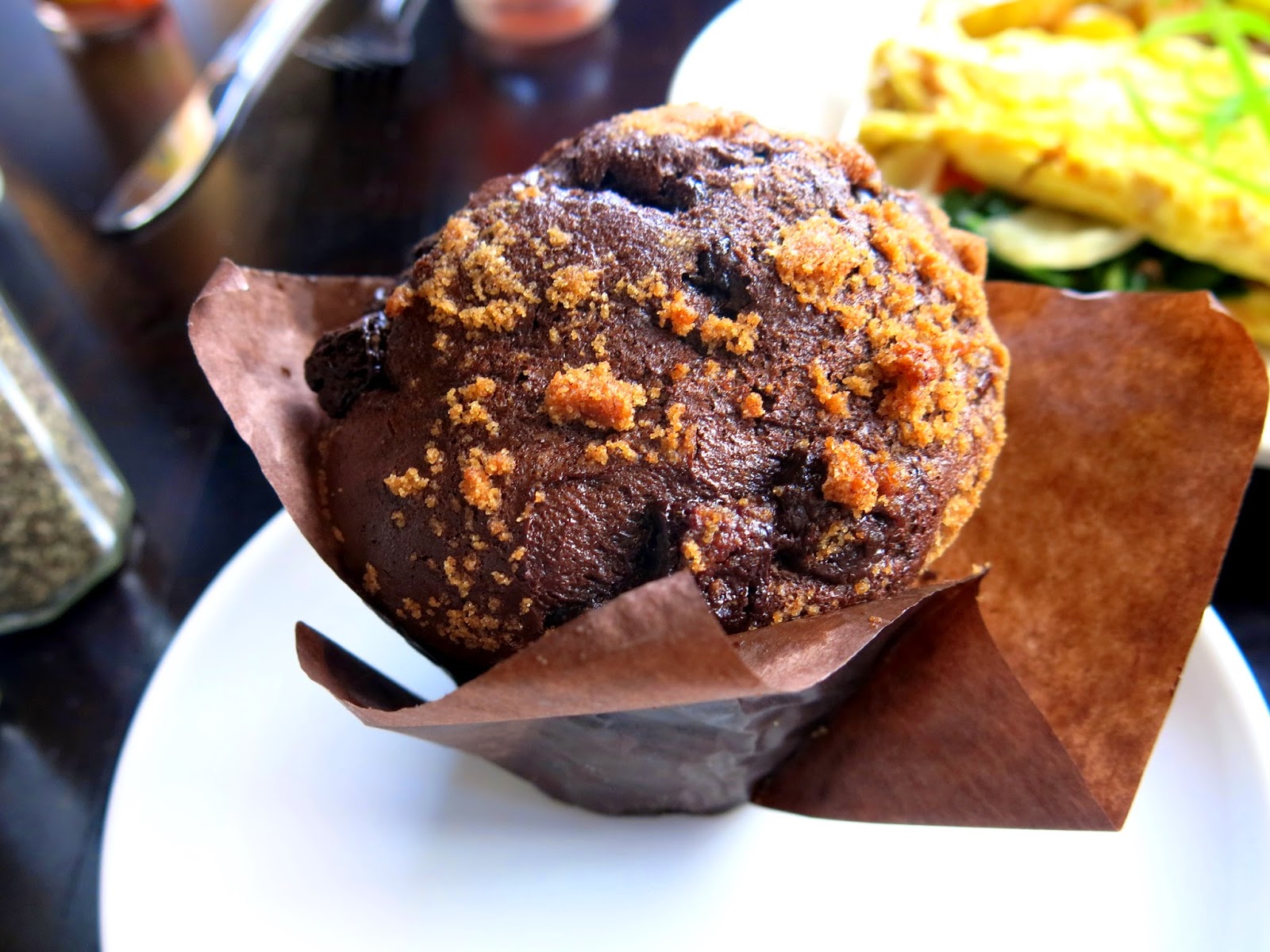 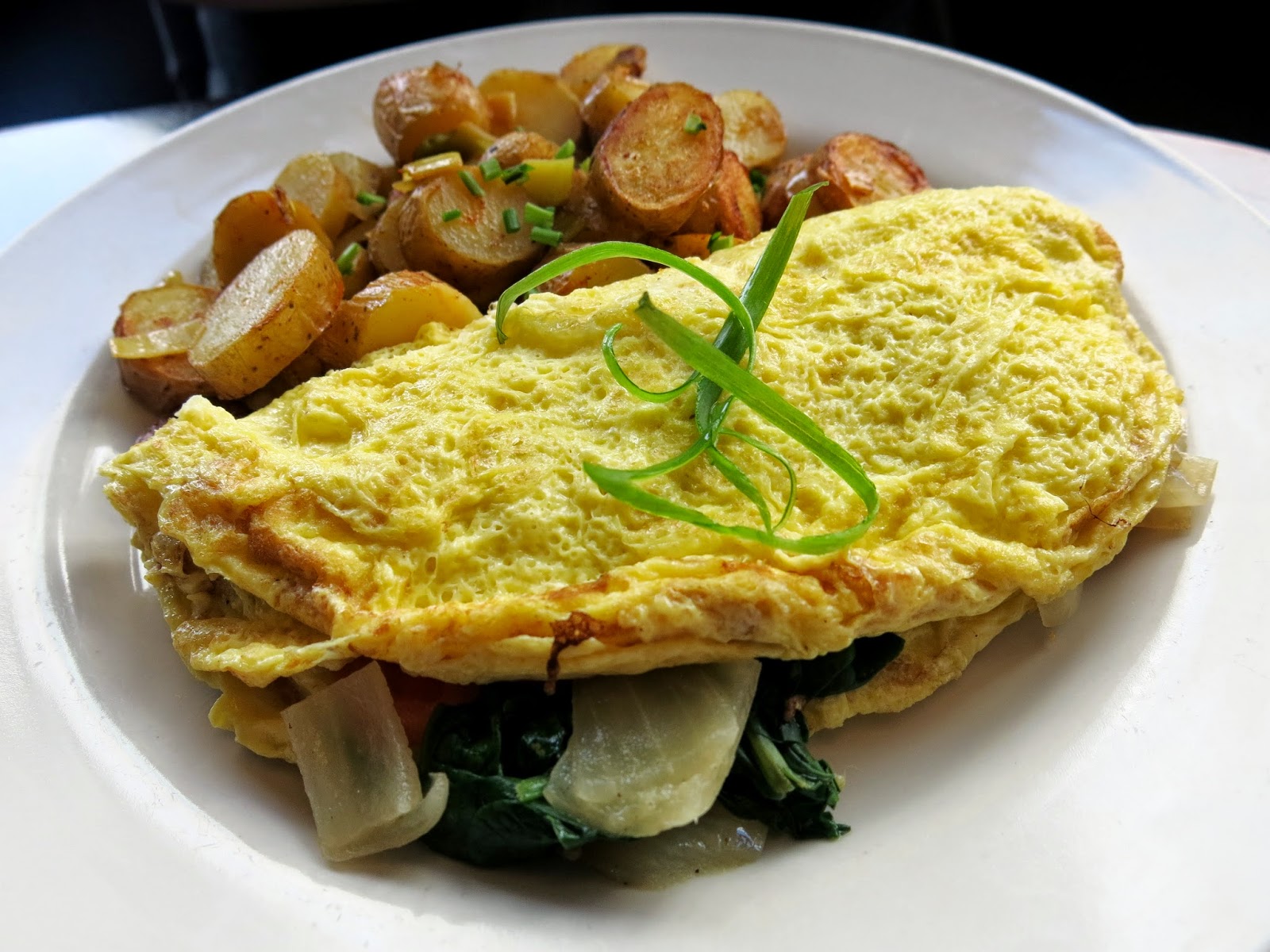 For his entree, Brocco ordered the Treehugger Omelette, which was loaded with roasted poblano peppers, onions, tomato, and spinach.  Brocco liked that the eggs were a little on the denser side of things, as it gave the omelet more substance, and the veggies were still a little crisp, adding texture to every bite.  The dish also came with a side of Fingerling Potato Hash, which was dressed in paprika and chives.  The potatoes were soft, not too salty, and had a lovely subtle flavor that made for a nice change from the typical kinds of breakfast potatoes found at other spots.  Brocco also ordered an additional side, a Double Chocolate Chunk Muffin, which also came warm.  Surprised by his first bite of the muffin, Brocco soon realized that the richness of the chocolate had actually been cut with a little cinnamon, giving the muffin an almost Mexican chocolate flavor. 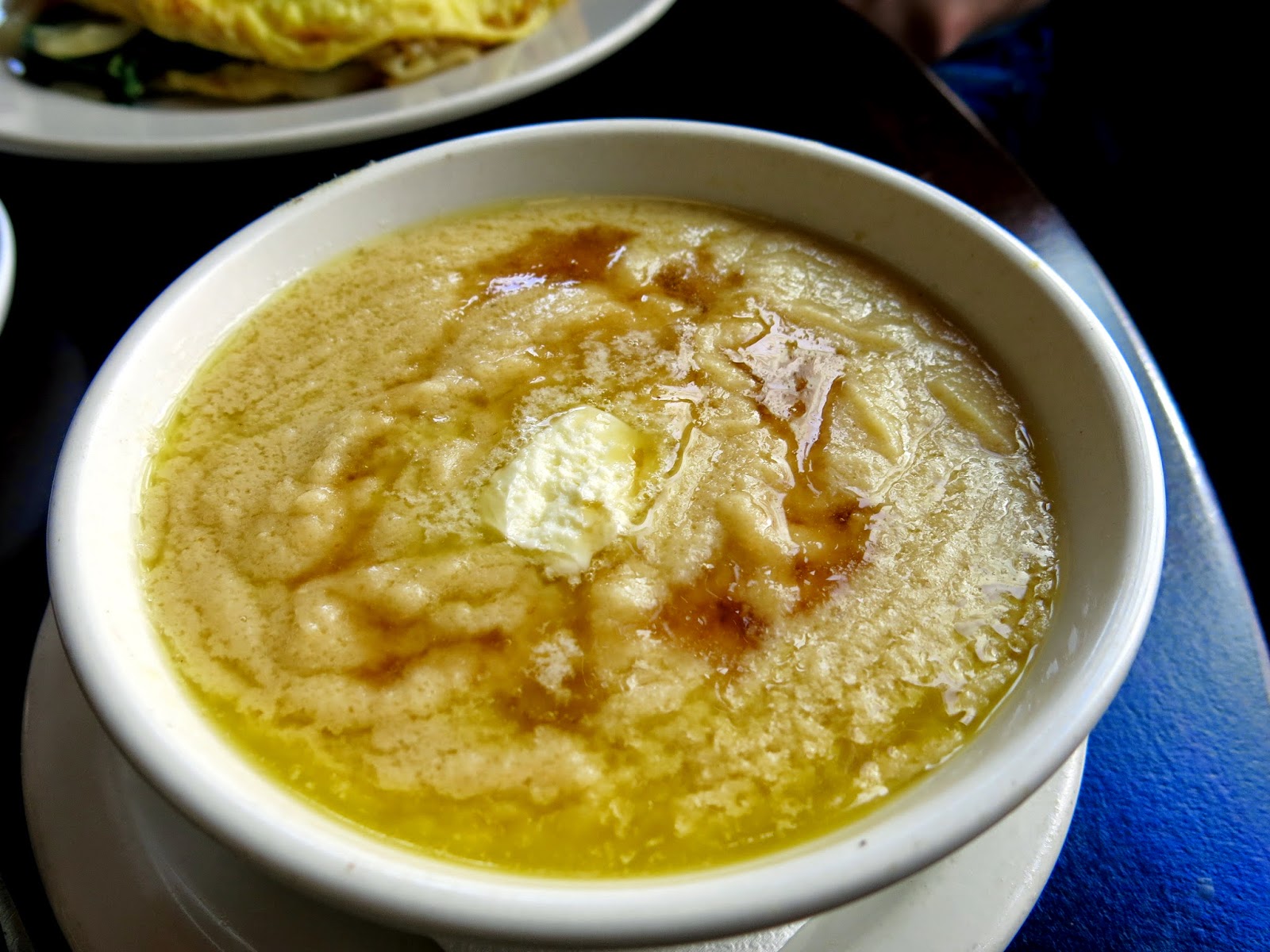 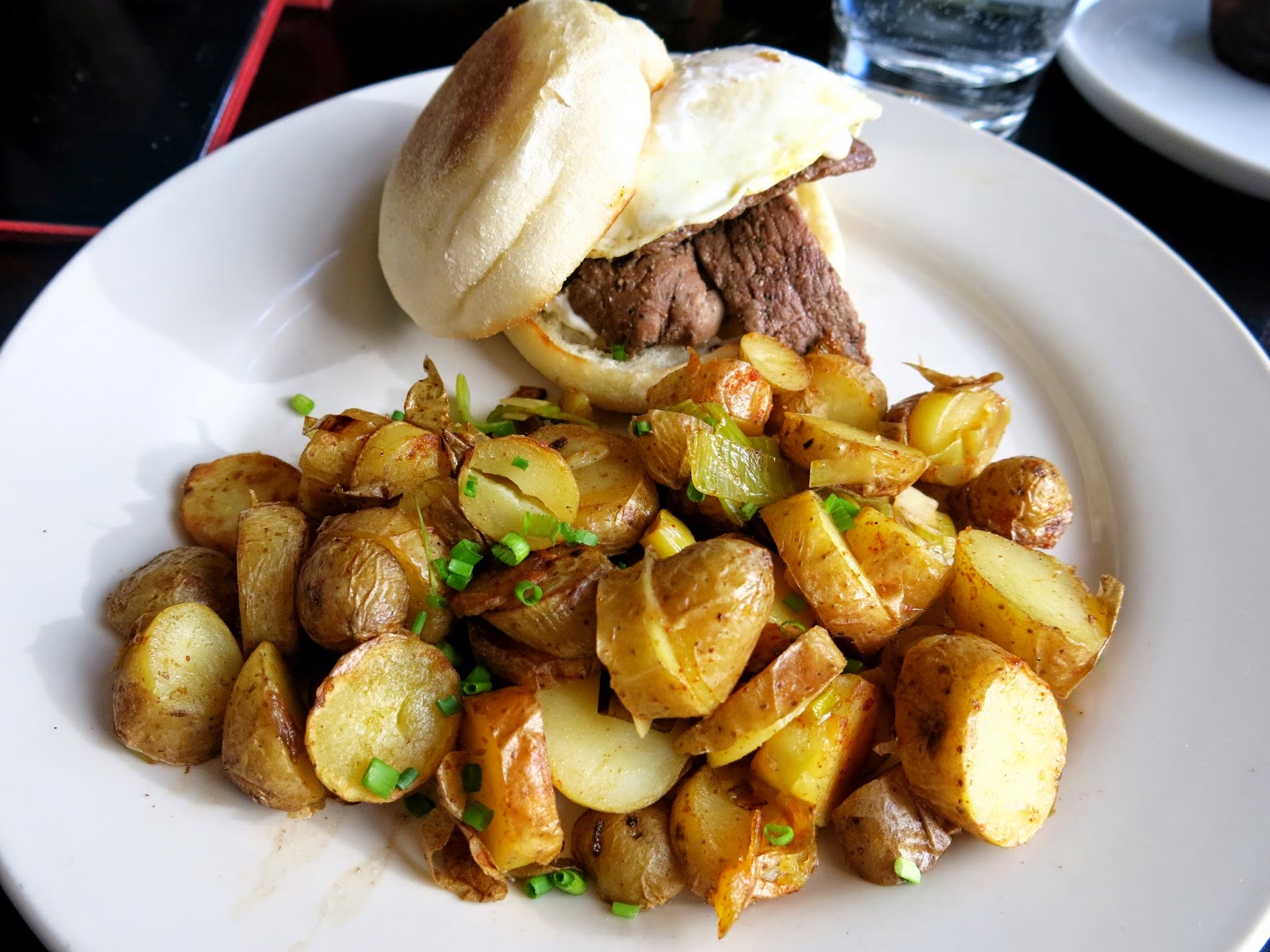 Brandy went for the Short Rib Sandwich with a side of Candied Bacon and Popcorn Grits.  The short rib meat on the sandwich was unbelievably tender and juicy, and Brandy liked that the fried egg on top of it served to make the dish all the more richer, but she couldn't help wishing for a little slice of tomato or the crunch of some onions.  "I see this a lot," Brandy explained to Brocco, "A nice meaty breakfast sandwich is often served without veggies, but I usually find that even a little bit of greenery does wonders to brighten up an otherwise heavy dish."  Brandy was rather surprised by the grits, which really did taste of popcorn!  "I know this looser style of grit is more traditional," she said, scooping up a spoonful of the porridge like goodness, "I actually do like my grits a little more polenta like, usually, but these have such an unusual flavor that I'm willing over look that."  The grits had also been topped with a pad of maple butter, which didn't add as much sweetness as Brandy would have expected, but did provide a bit of guilding for the lily, so to speak.  The Candied Bacon was everything one could want from something of that name; thick slices of bacon coated in a thin layer of brown sugar to make the perfect kind of salty and sweet brunch snack that left one licking one's fingers for minutes after they were gone. 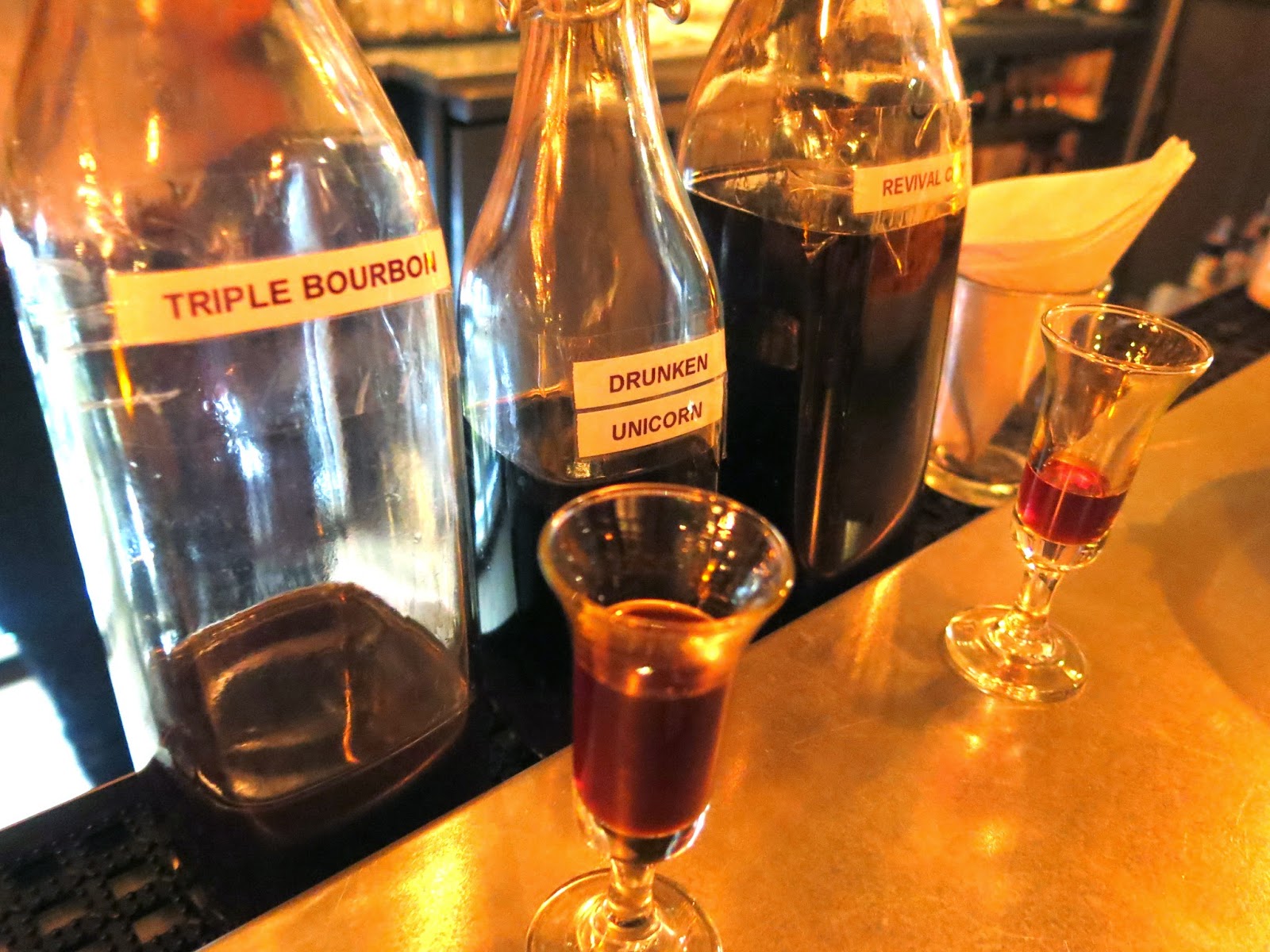 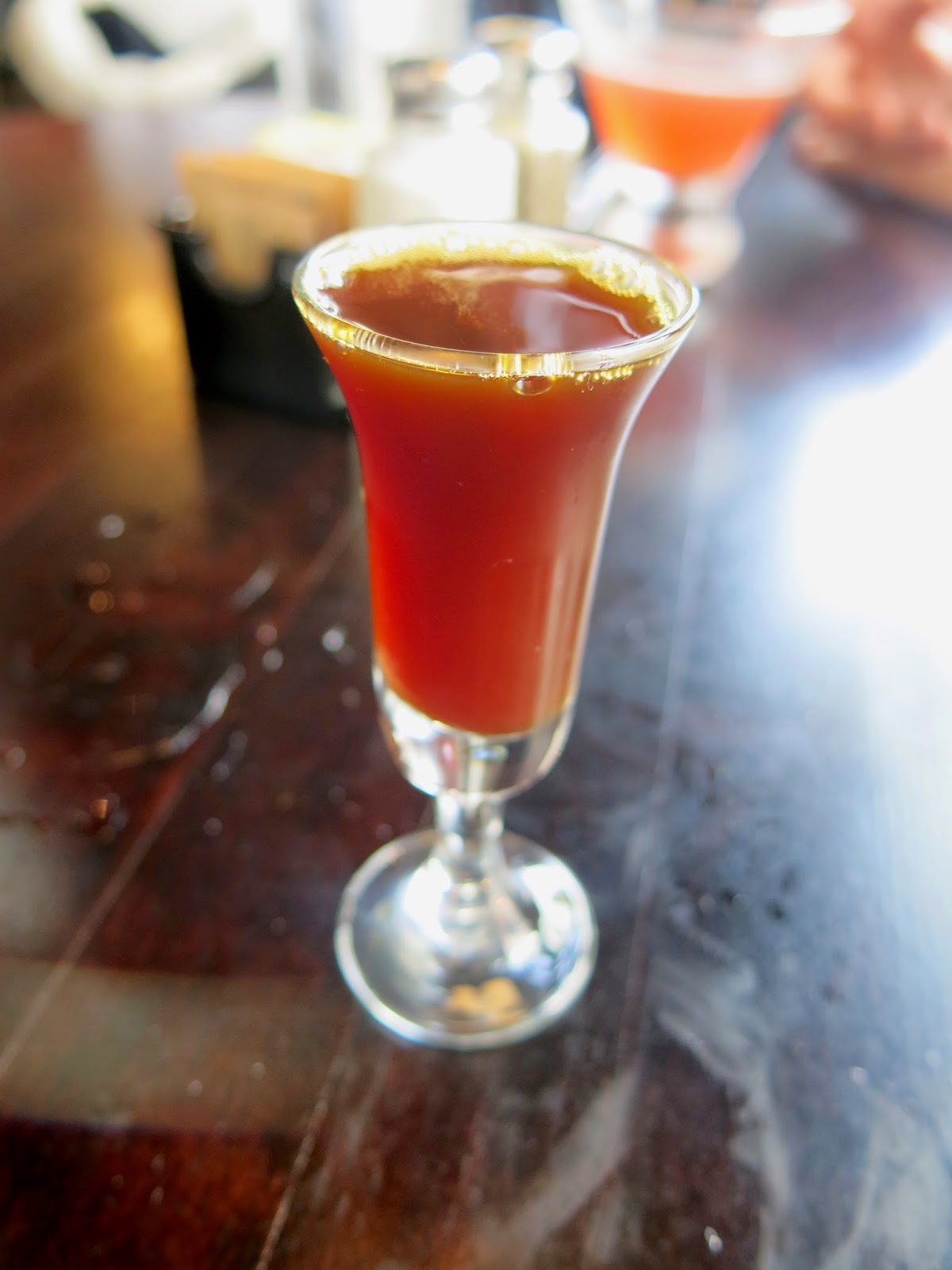 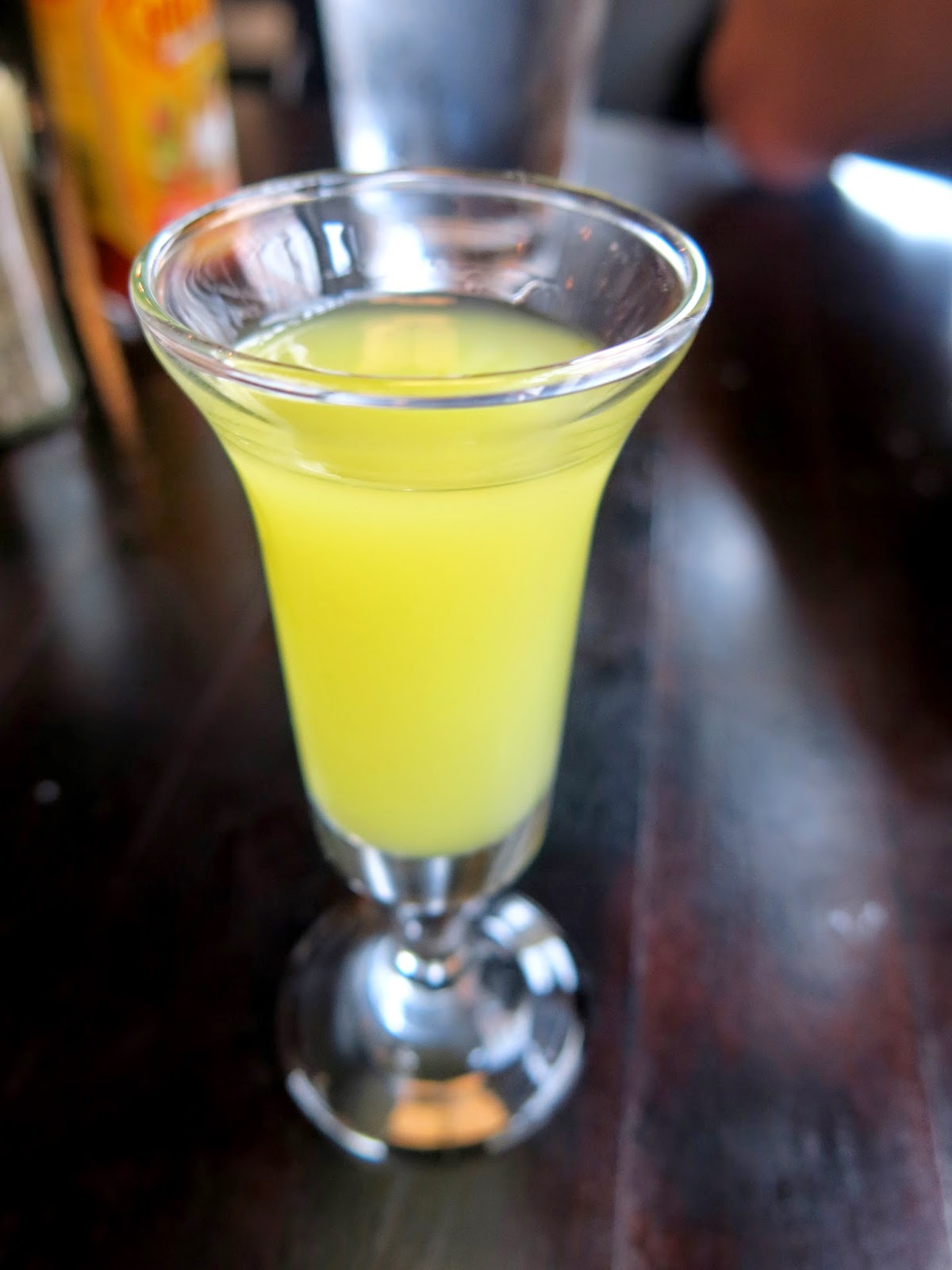 Closing out the meal, Brandy found herself intrigued by one section of the cocktail menu that mentioned house made coffee liqueurs, created using different blends of Dark Matter Coffee, and so she ordered up a little cordial sized glass of the Drunken Unicorn (so name because it utilized Dark Matter's Unicorn Blood blend).  The little glass of chocolate brown liquid was concentrated and thick, but smooth and luxurious, with all of the coffee's bitterness and acidity toned down with the rum it had been infused with.  Seeing the bliss of Brandy's face as she sipped the little coffee, the waiter insisted she also try the house made Limoncello, and he brought her another tiny glass of bright foggy yellow liquid.  This limoncello was also incredibly smooth with an almost creamy like flavor.  Though the drink was very sweet, it had somehow not taken on the syrupy quality other limoncellos can sometimes have.

Mightily impressed with the new occupants of one of her formerly favorite restaurants, Brandy had to be practically dragged away from the table by Brocco once he had collected all of the data he needed.  With most dishes priced around $10 and most cocktails around $12, Brandy thought the quality of ingredients and care put into their preparation was more than justified.  The subtle plating of the dishes as well as the perfect portion sizes showed that someone had really thought out not only the flavors, but the entire experience of eating at Revival Social Club, from the setting down of the plates all the way through the savoring of the last bite.  Even more impressed was she by the inventiveness of the bar, which not only paid homage to a by gone era of cocktail craftsmanship, but also showed originality in creating their own coffee liqueurs, a product not common even in the fanciest denizens of drink.  "Remember what you said about going back in time to eat that dish again?" Brandy asked Brocco.  He nodded.  "Maybe that's not such a bad idea after all," Brandy said, scratching her chin. 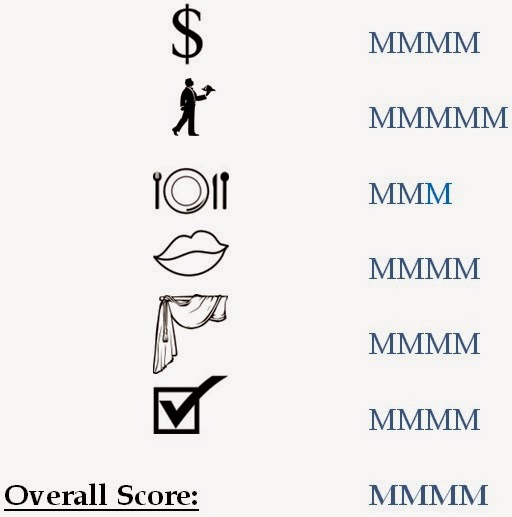