Local Root or the Root of the Problem 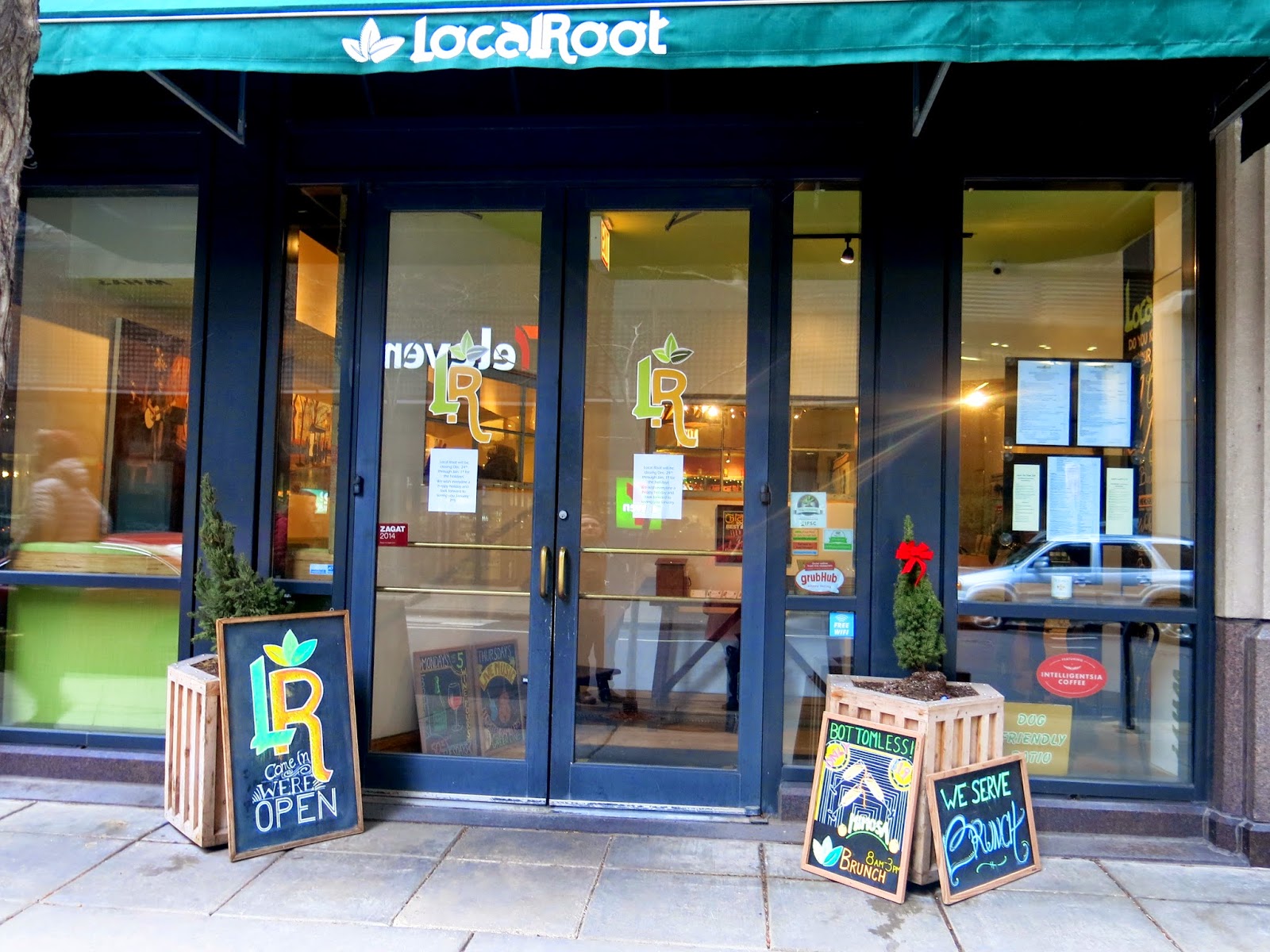 "I'm thinking of opening a new bakery on Navy Pier," Brandy's good friend Mama Bee (owner and operator of Honey Bee Bakery and all its subsidiaries) said one afternoon as the two were wandering about downtown.  "Navy Pier, eh?  Trying to cater to the tourist trade?" Brandy asked jokingly.  "Well... yes!  Imagine all those hungry people milling around, looking for something to nosh on while they... do whatever it is they do at Navy Pier.  It's an untapped goldmine, I tell you."  "I hardly think it's untapped," Brandy scoffed, "If anything, if might be a little over tapped.  There may not be a bakery right on the pier, but there are so many donut shops, coffee houses, and pubs up and down Streeterville, one can hardly move for some good to eat."  "Ah, yes, but what about somewhere fresh?  Somewhere that uses only local ingredients?  Somewhere that doesn't buy into the hype of the metropolis?" Mama Bee asked.  "Yeah, they've got that covered too," said Brandy, and walked Mama Bee across the street to Local Root. 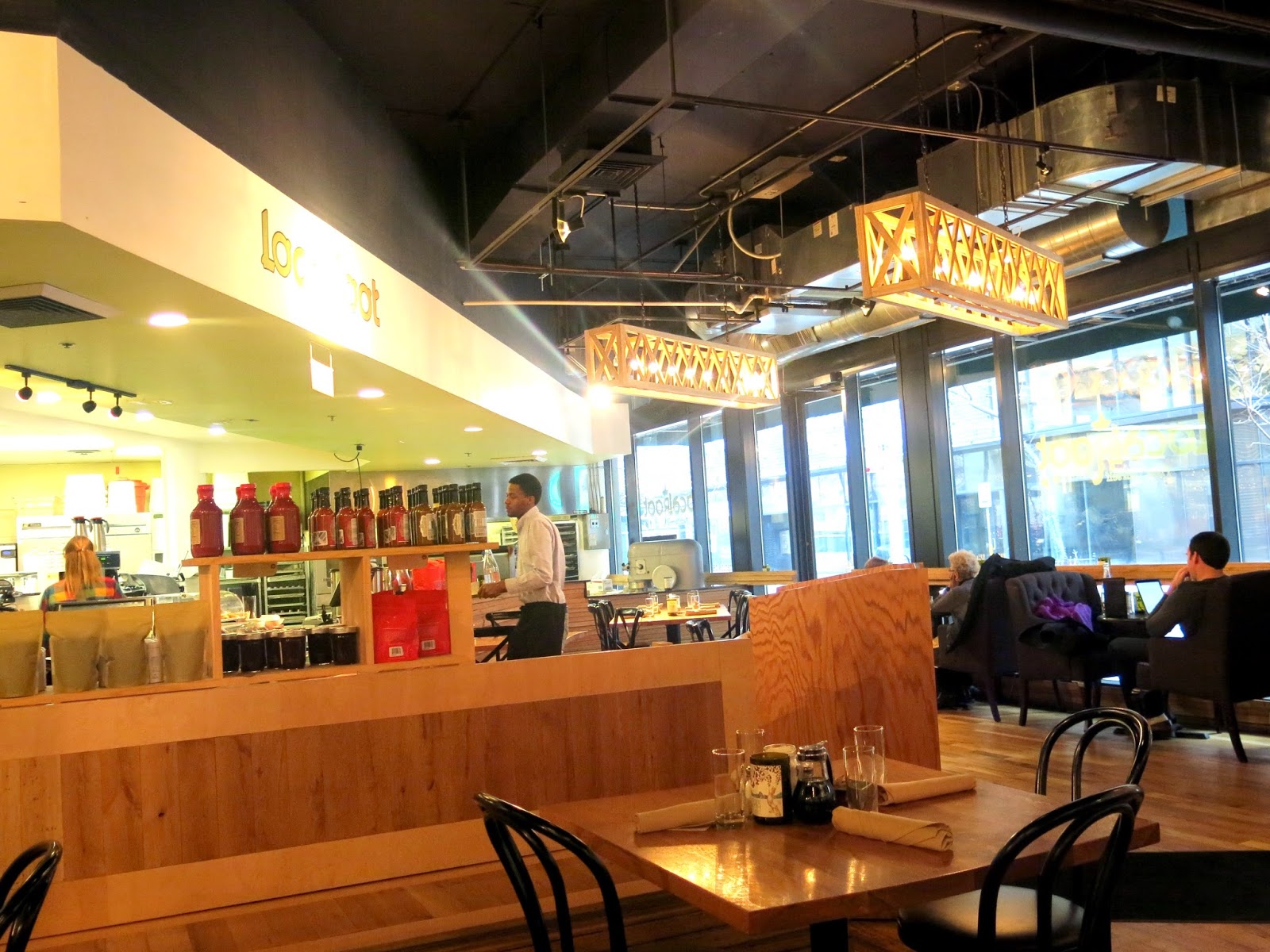 The inside of Local Root was rather eclectic and homey, more of what you would expect from a neighborhood joint in Andersonville or Roscoe Village, not a piece of prime real estate minutes away from Navy Pier.  "See?  No glitz, no pomp, no overly contrived design, just a typical diner sort of place," Brandy mused, "Isn't it nice to see they aren't trying to snag the tourists with lots of flash?"  Mama Bee shrugged.  Brandy also noticed that at the very top of the menu, the restaurant had listed which farms all of their meat and produce had come from, solidifying their commitment to serving up only locally sourced ingredients. 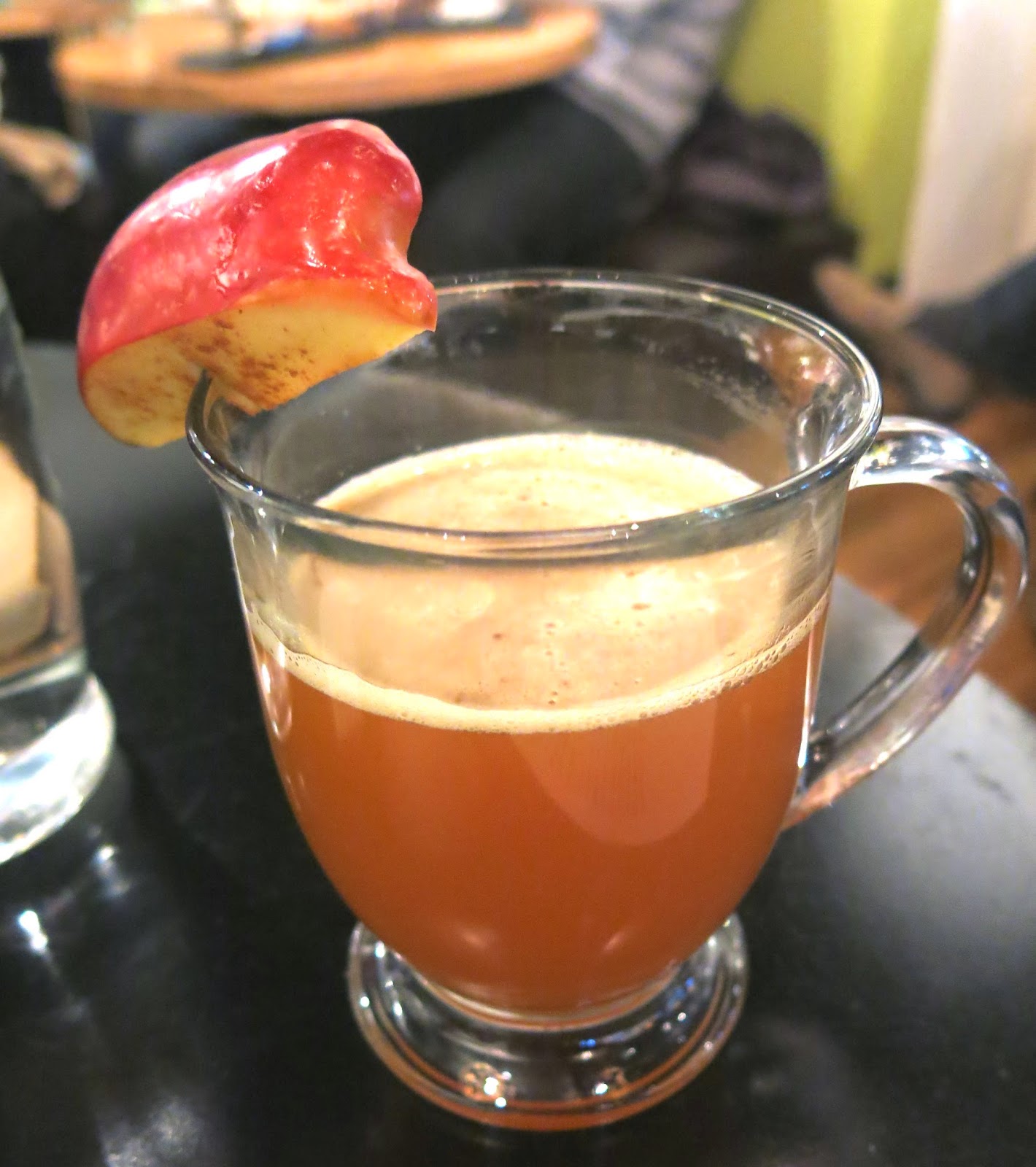 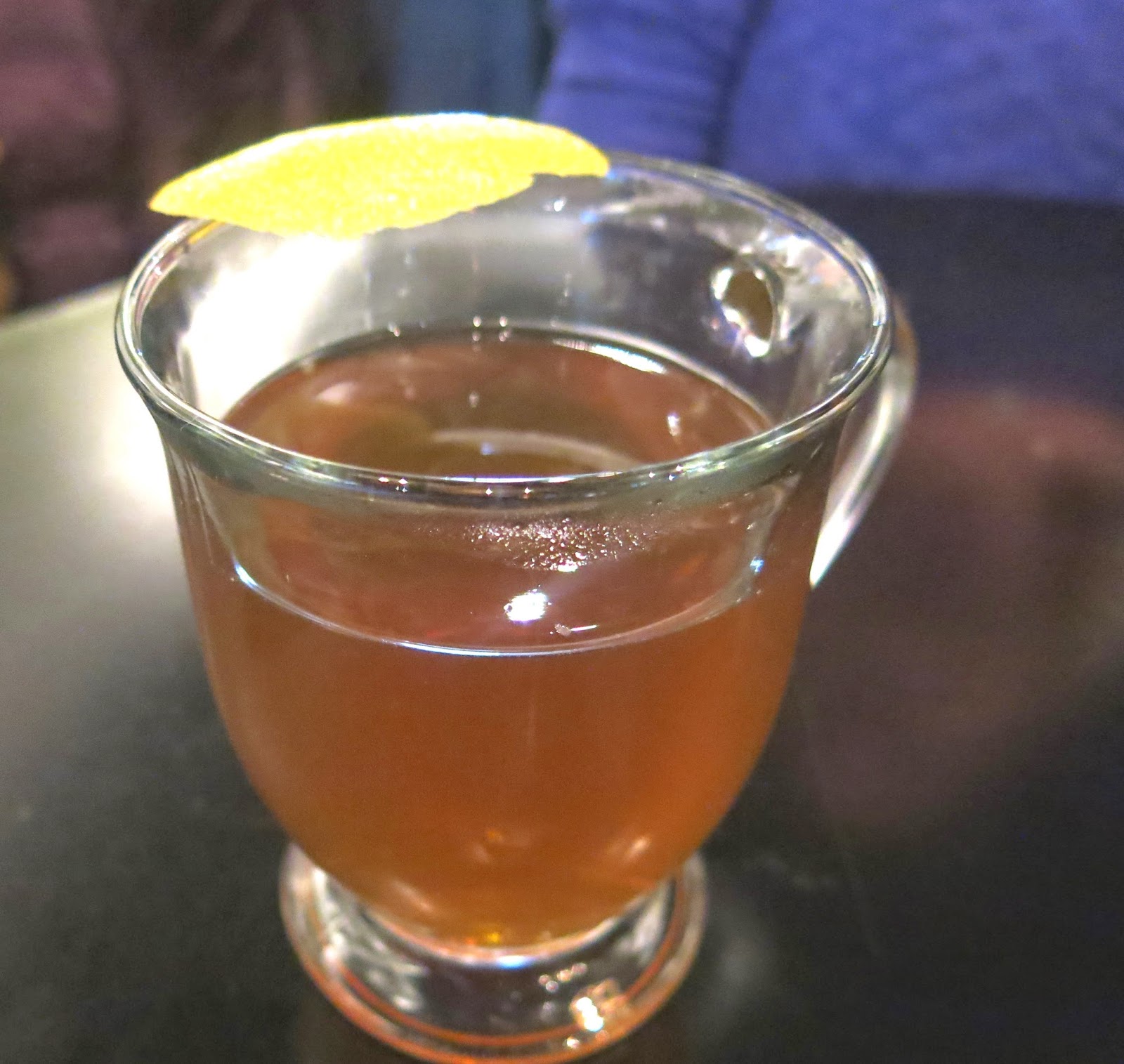 The pair started off with a couple of hot cocktails to warm up on such a dreary, cold day: for Mama Bee the Hot Texas Toddy with tea flavored vodka, lemon, and organic honey ("This cocktail appeals to me for some reason," Mama Bee commented, to which Brandy rolled her eyes) and for Brandy, the Diving too Deep, with apple cider, cinnamon, and aged brandy ("This one appeals to me for some reason," Brandy commented sarcastically).  Both cocktails were pretty tasty and definitely nice just to hold in their cold hands as to sip.  "More places should push hot cocktails in the winter time," Brandy commented, "Now that's how you make supply match the demand!" 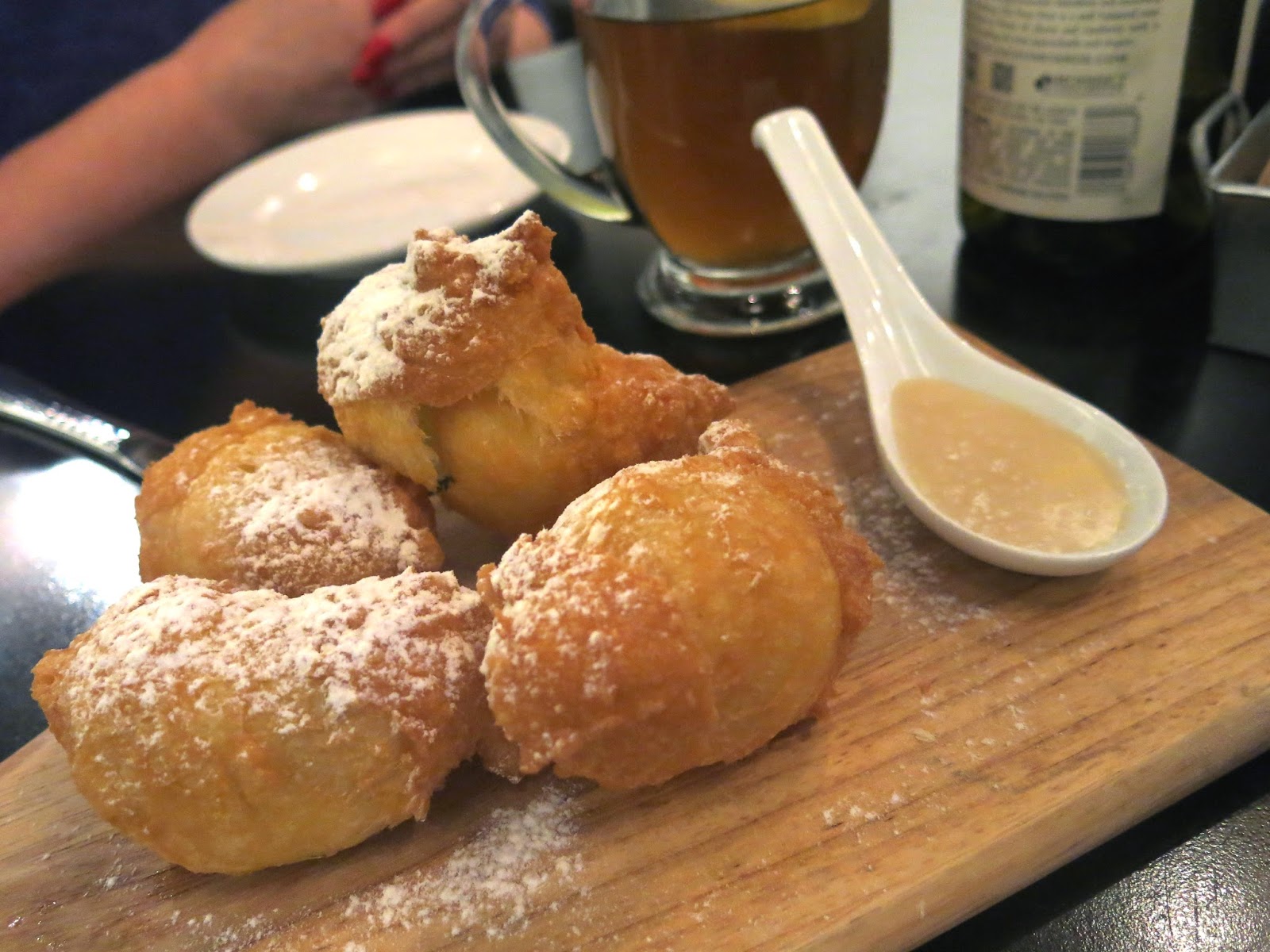 One of the specials of the day was fresh beignets with a rum cream sauce for dipping, so the two ladies decided to start off with that.  The large balls of fried dough were nicely crisp on the outside and wonderfully fluffy and light on the inside with a decent bit of chew.  The rum sauce actually packed more of a punch than either Brandy or Mama Bee were expecting, and they both wished they had been given much more of it, as it seemed to disappear completely halfway through the dish. 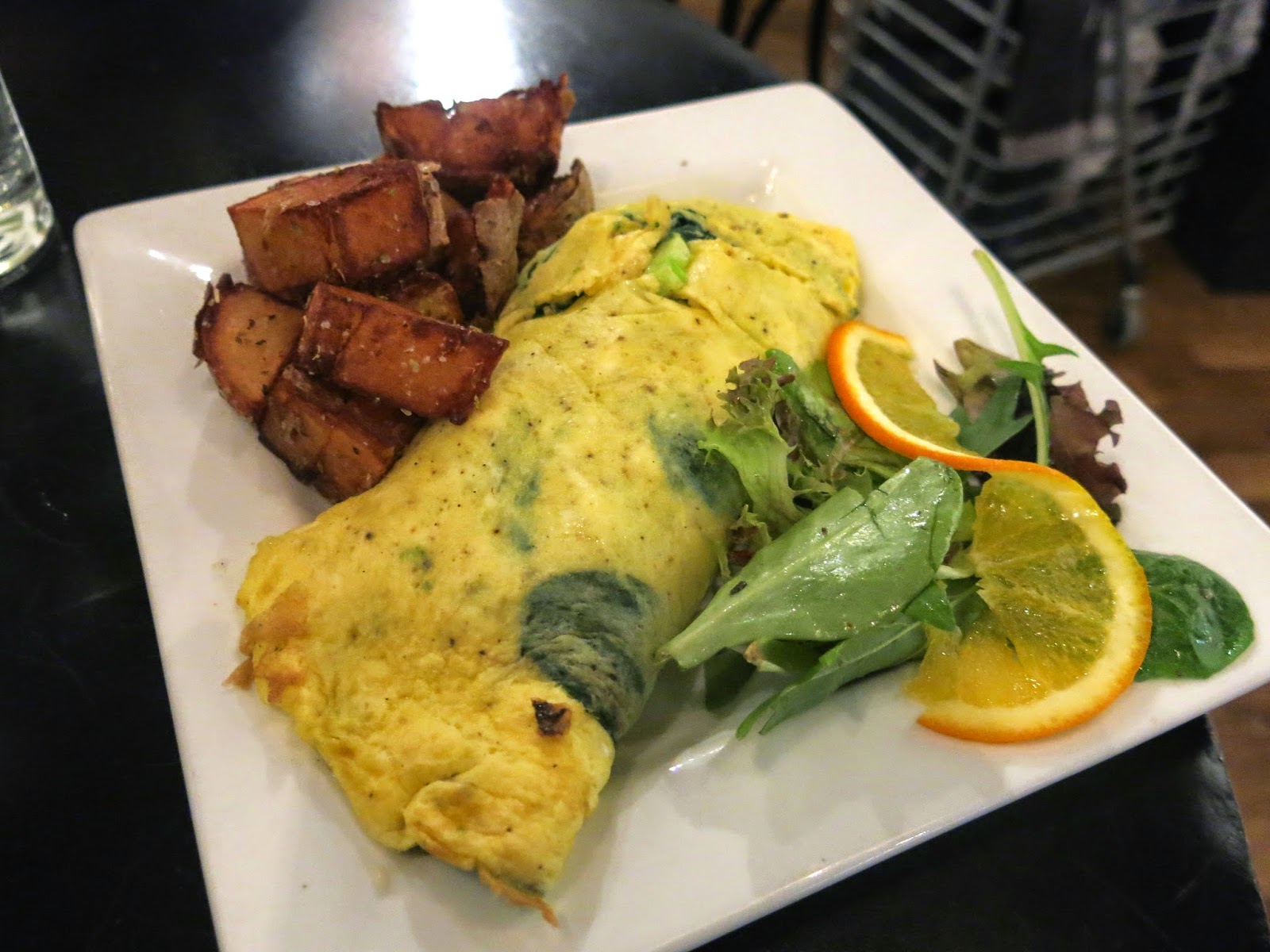 For her entree, Mama Bee ordered the Omelette of the Day, which came with broccoli, cheddar, and spinach as well as a aside of house potatoes.  The eggs were on the denser side, which Mama Bee actually enjoyed, and the vegetables were still nicely crisp and vibrant, though Mama Bee felt the seasoning was a little heavy handed and uneven.  The potatoes were nicely crispy on the outside with a soft interior, and had been seasoned with large granule salt, which provided a nice bit of added texture to them.  "They've followed your rule of adding a bit of greenery and fruit to the plate as well," Mama Bee commented to Brandy, "Though I would have liked a little pot of honey for my toast... No matter!" and she produced several small pots of her own honey from the depths of her purse. 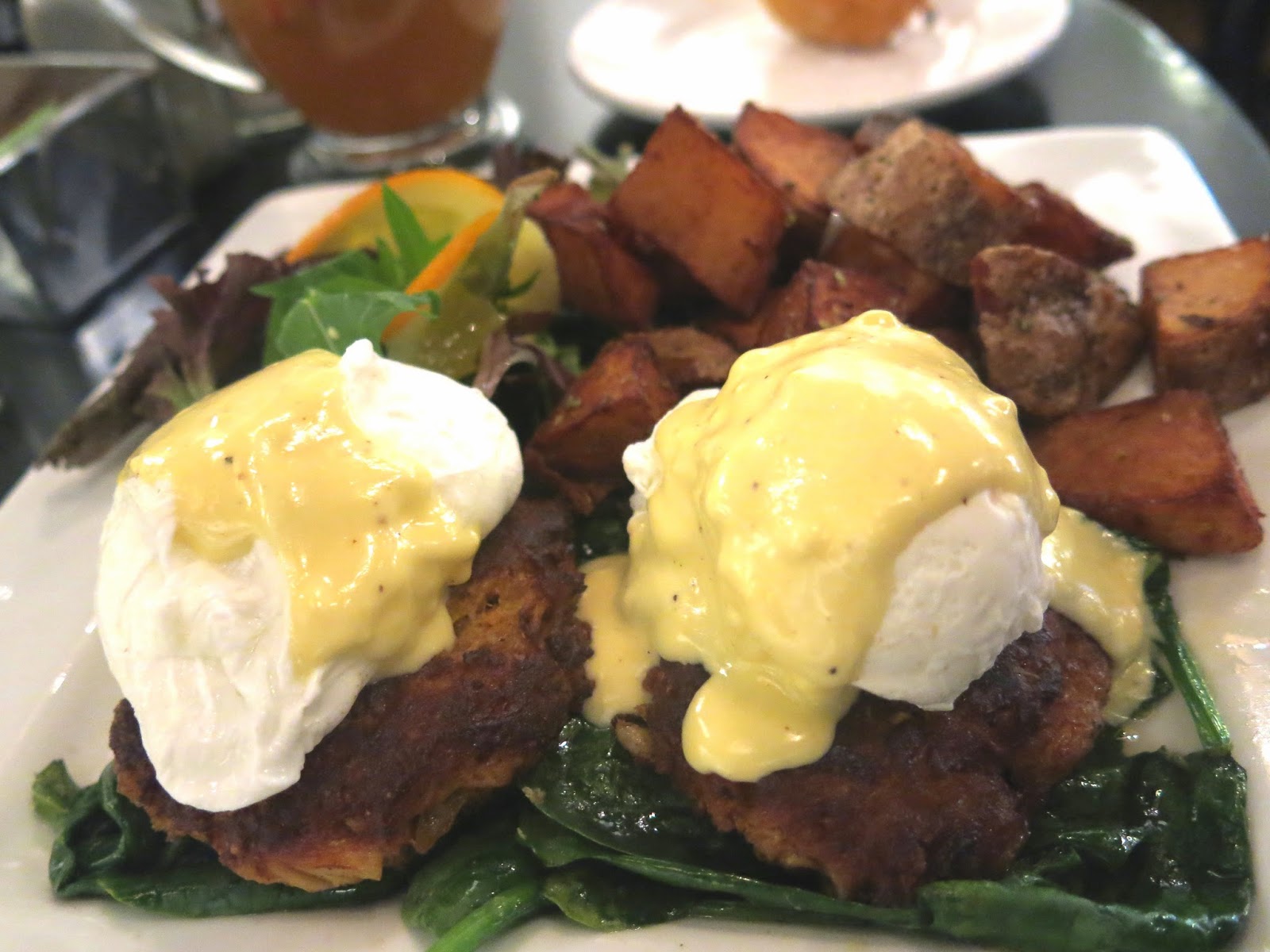 Brandy ordered the Crab Cake Benedict ("A rather odd thing to see on a menu concentrated on being local," Brandy said, "I'm not aware of Chicago keeping crabs in Lake Michigan."), which also came with a side of the same potatoes.  The crab cakes had a nice crabby flavor, even slightly bordering on being too pungent, and boasted a decent hit of spice, just enough to warm up the inside of one's mouth.  The somewhat aggressive flavors of the crab cake were tamed by the addition of some sauted spinach, and the poach on the eggs was near to perfect.

Though the service was adequately friendly and the food reasonably good, though unexciting, the real surprise of the meal came along with the bill.  Because Brandy has a, perhaps, bad habit of ordering things based on curiosity rather than price, she was a little more than shocked that the total for a two cocktails, a shared appetizer, and two entrees came out to just over $80 after tax and tip.  "$11 for a cocktail I can sort of understand, but $9 for a few pieces of fried dough?  $15 for an omelette?  $21 for a Benedict?!?!  How can they charge prices like these for such un-gilded food?  I've had dishes topped with caviar that cost less!"  Brandy exclaimed.  "Perhaps it's the price you pay for eating locally," Mama Bee suggested.  "Nonsense," Brandy scoffed, "I've eaten at plenty of places that use local ingredients and have never seen this kind of markup.  My guess is these prices are a product of the restaurant's location."  This hypothesis seemed to ring true for Mama Bee.  "Maybe you're right," she said, "I would love open my little bakery on Navy Pier, but perhaps the tourist game is a little too rich for my blood if this is the kind of example I'm to follow." 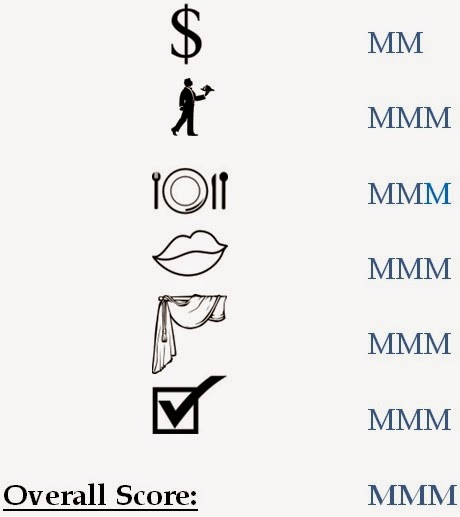