Meli Cafe or From the Ground Up 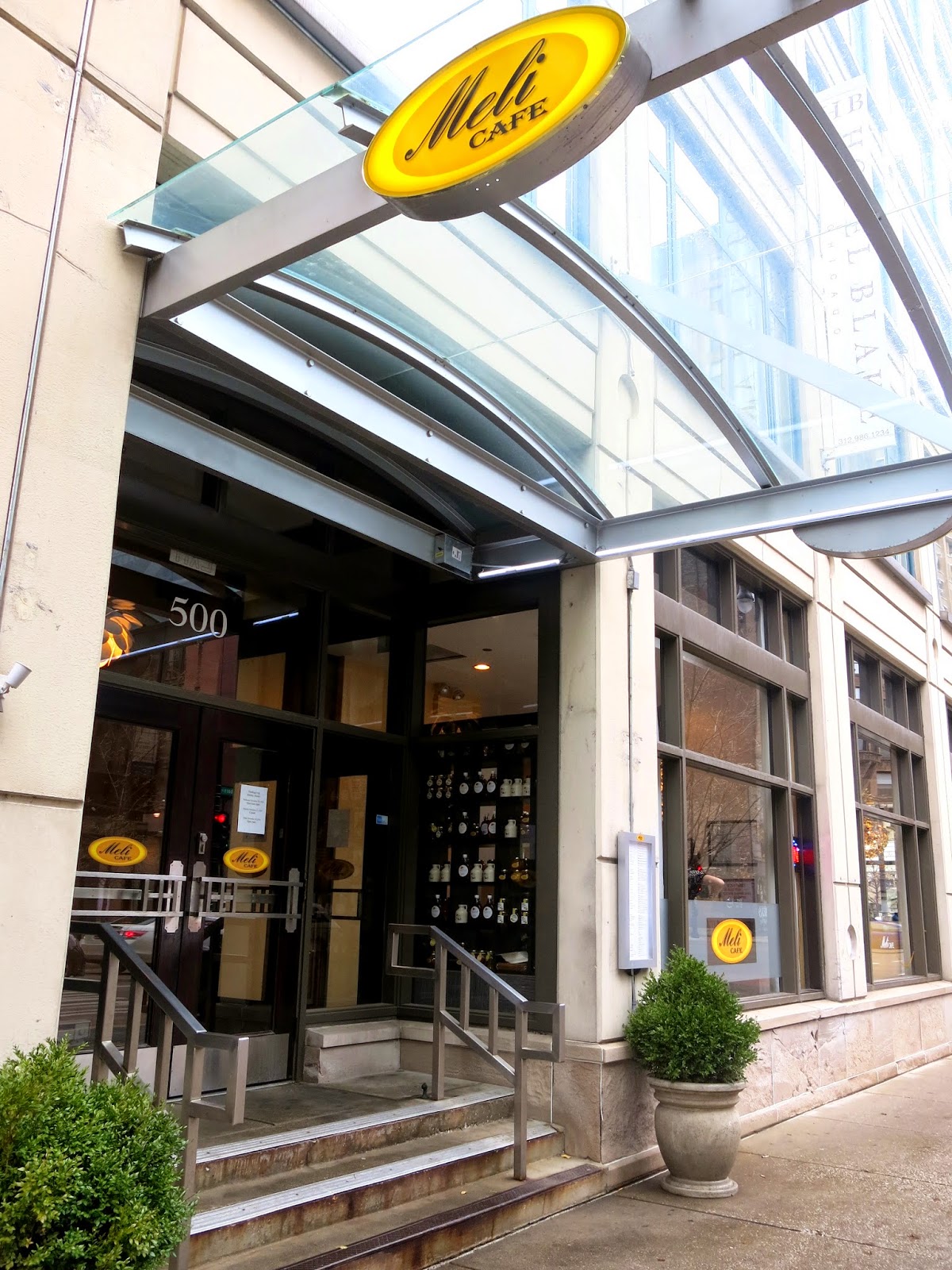 "Come on, girl, keep up!" Brandy called over her shoulder to Bailey as they bustled down State Street.  Though Bailey is quite a bit younger than Brandy, she was rather surprised by how spry her friend was, especially with several pounds of Christmas shopping bags in each of her hands.  "I'm going as fast as I can," Bailey panted, tottering on for a few more paces before collapsing onto a nearby bench.  "Where is your stamina?" Brandy asked, standing over Bailey and shaking her head, "I suppose this is what comes of surviving on Thanksgiving leftovers all week."  "Why aren't you tired?" Bailey wondered, "We've been out here shopping for hours and you're not even winded!"  "Why don't we go get some brunch and I'll show you my secret," Brandy replied, sympathetically, and helping Bailey up off the bench she escorted her down the road to Meli Cafe on Dearborn. 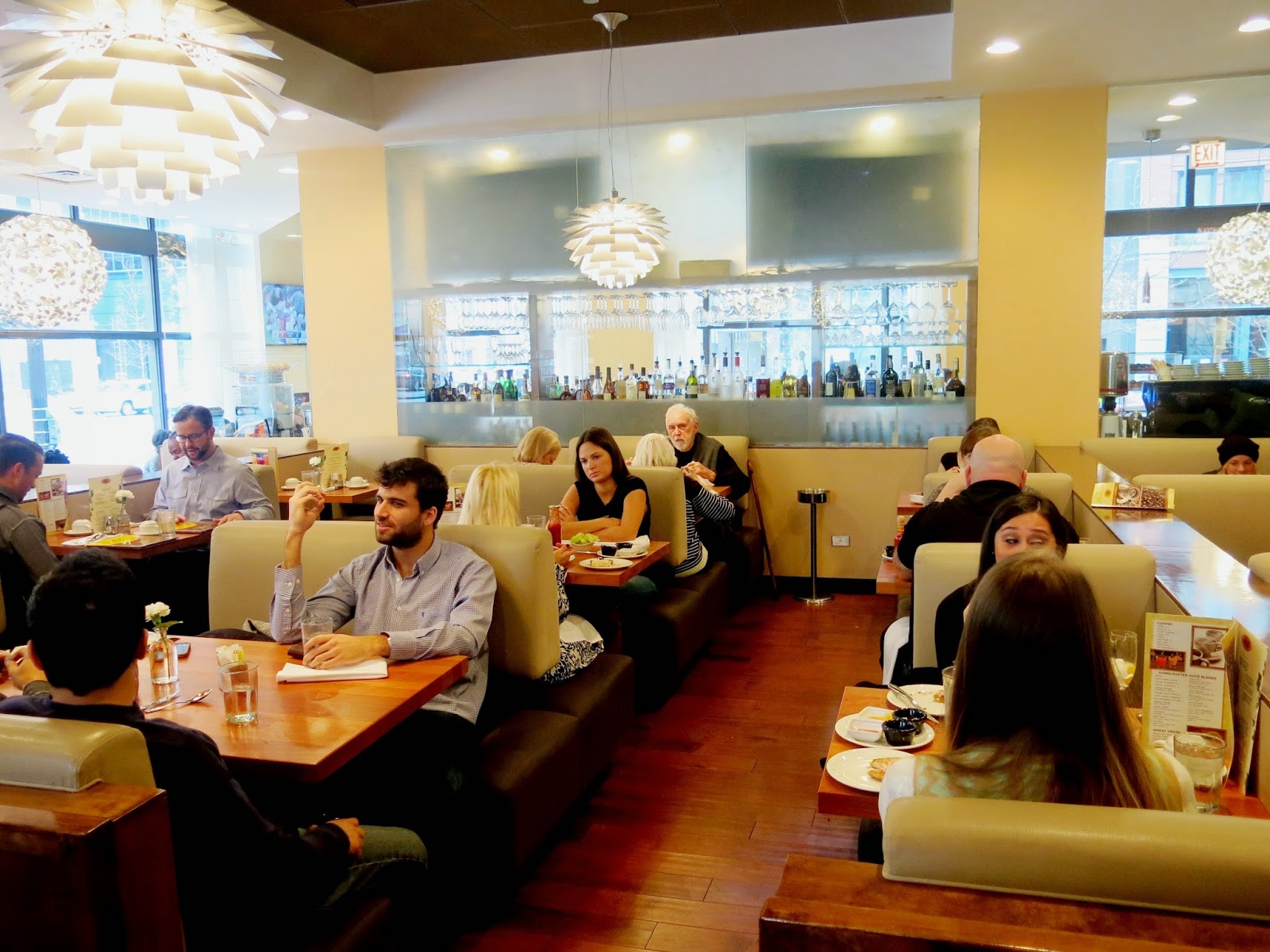 The tables inside Meli Cafe were nicely spaced out, ensuring a large amount of people could be served without being jam packed together, and the decor was surprisingly clean and modern.  Brandy was happy indeed to see that the restaurant was open and sunny all around the dining area.  "I simply cannot abide a breakfast restaurant doesn't have adequate sunlight!" Brandy explained to Bailey, "And not only does this place have the perfect amount of windows, it's also got very lovely light fixtures!" 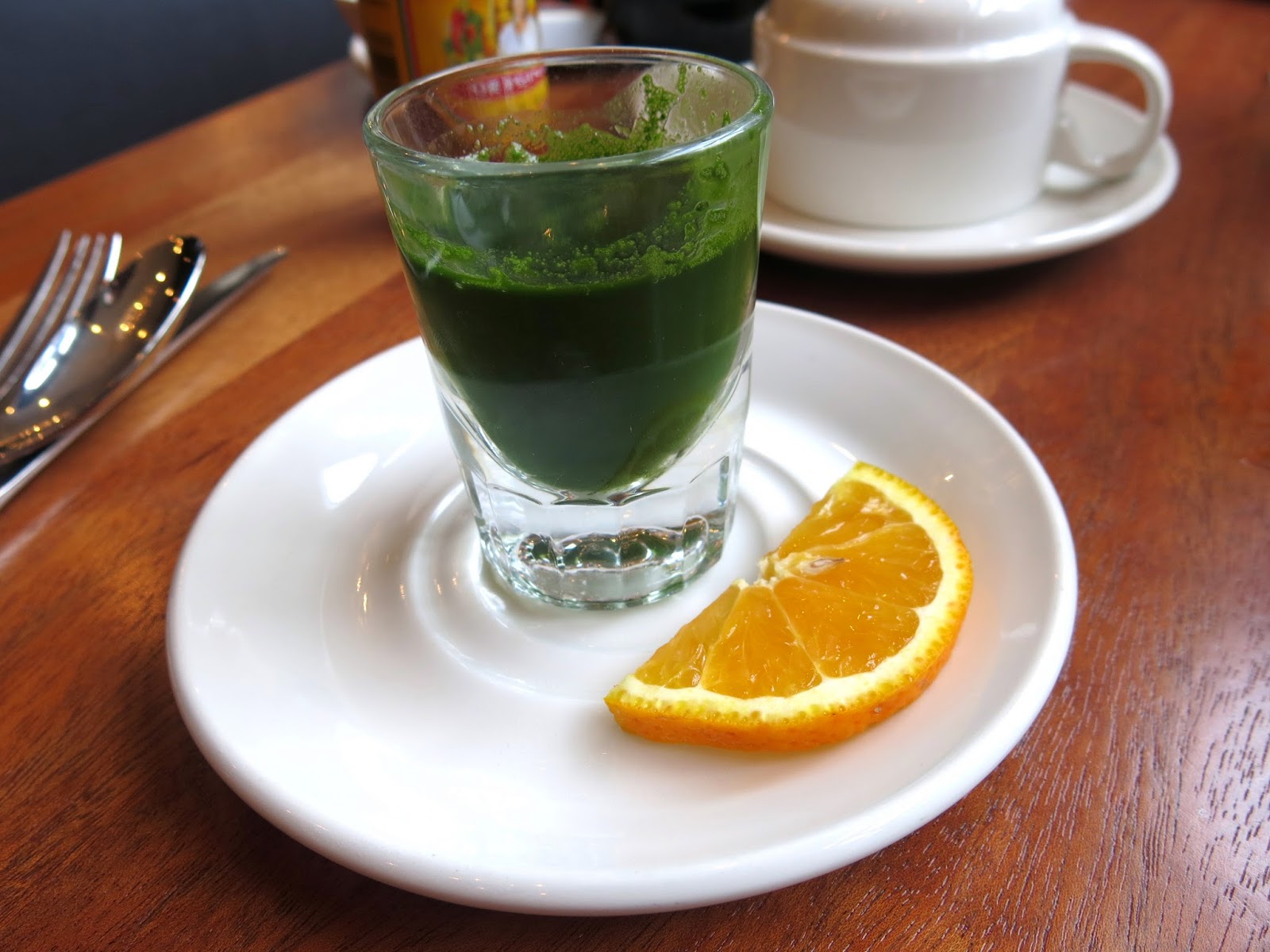 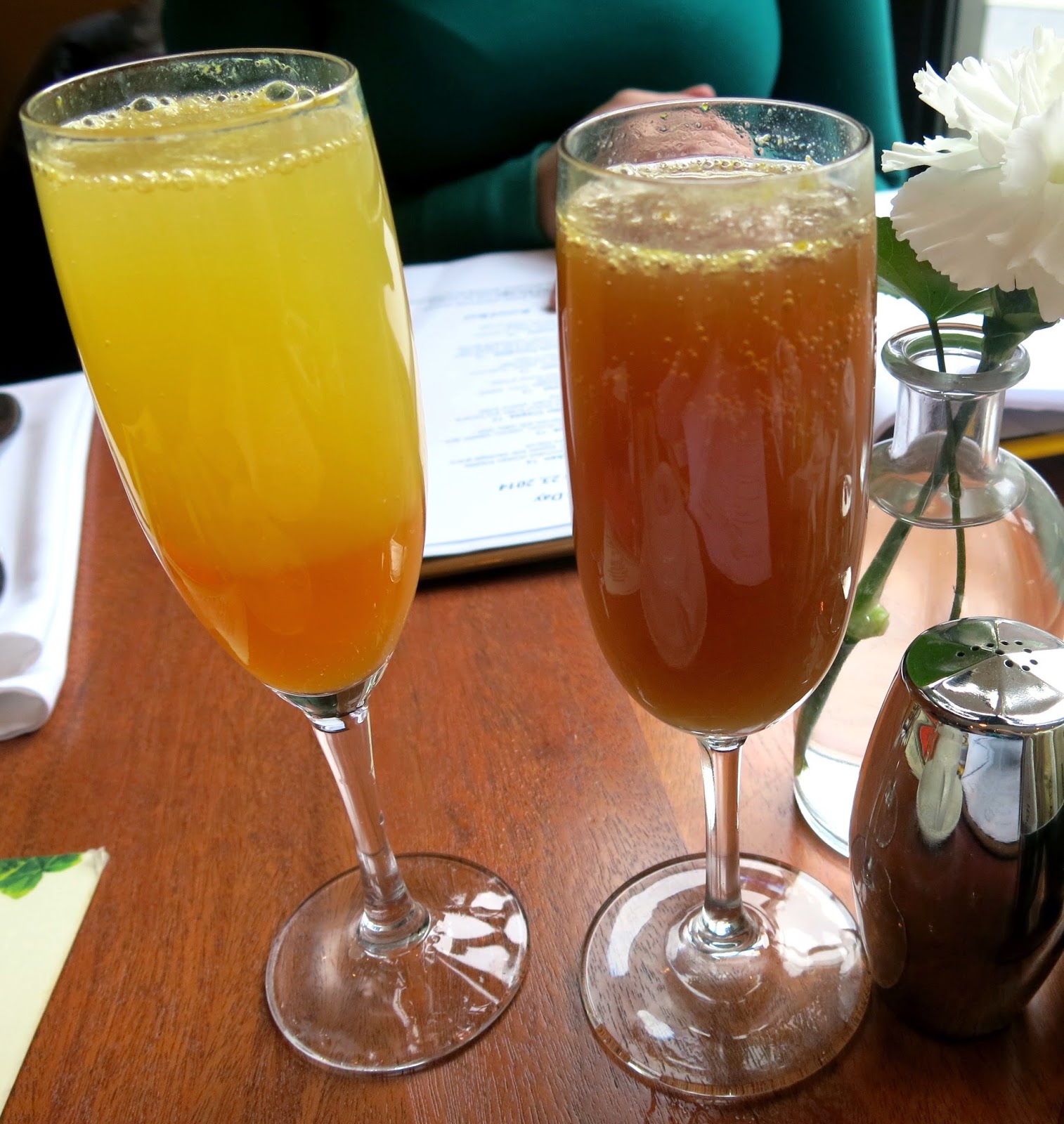 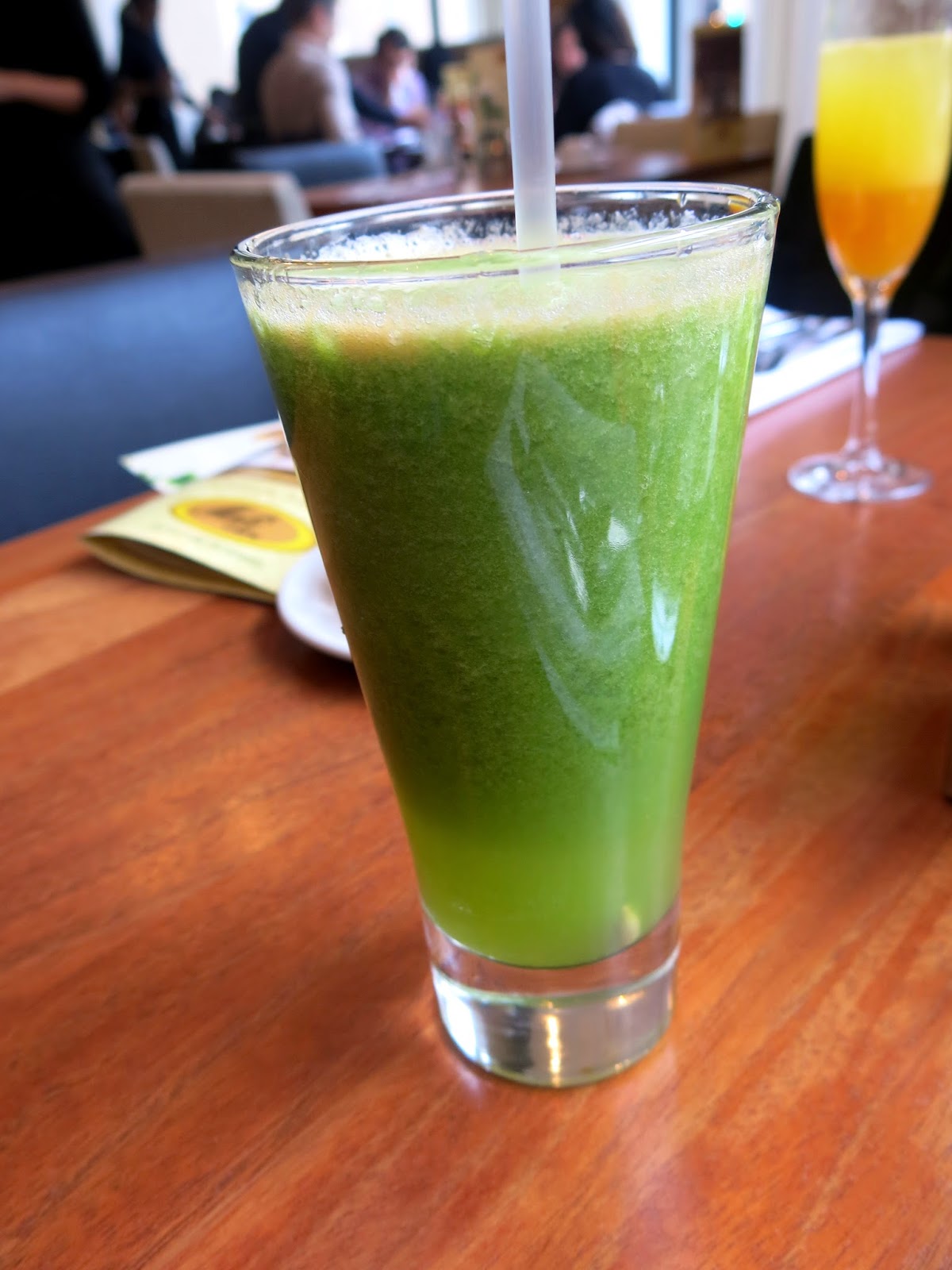 Brandy and Bailey started with a pair of mimosas: for Bailey, the Fuzzy Mimosa, which came augmented with peach schnapps, and for Brandy the Moon Mimosa, which was finished with a little raspberry liquor.  Bailey really enjoyed her drink, which she felt was the perfect combination of a mimosa and a fuzzy navel, but she especially loved the use of freshly squeezed orange juice.  Brandy was less enthusiastic about her drink, thinking the flavor was a little too sweet for her.  "It's not bad," she admitted, "But it does make the teeth hurt a bit.  I think I need to chase it with something a bit healthier."  Much to Bailey's surprise, Brandy ordered a glass of Green Envy juice from the extensive list of fresh juices and smoothies, and this, Brandy claimed, was the secret to her energy.  "Ah, now that's much better," Brandy said after sipping the mix of apple, pineapple, pear, wheat grass and lemon, "Nice and bright, a little sweetness with a nice tang.  Jam packed with vitamins and all sorts of goodies.  Ever since I heard Martha Stewart extol the virtues of green juice, I've been hooked."  "I've never had wheat grass," Bailey said, wonderingly, "What's it like?"  "Like drinking a freshly mowed lawn in a very pleasant sort of way," Brandy mused, and deciding her description wasn't sufficient, she ordered two freshly juiced shots of the green stuff and walked Bailey through the procedure of downing the liquid and then biting down on an orange slice to cut the bitterness. 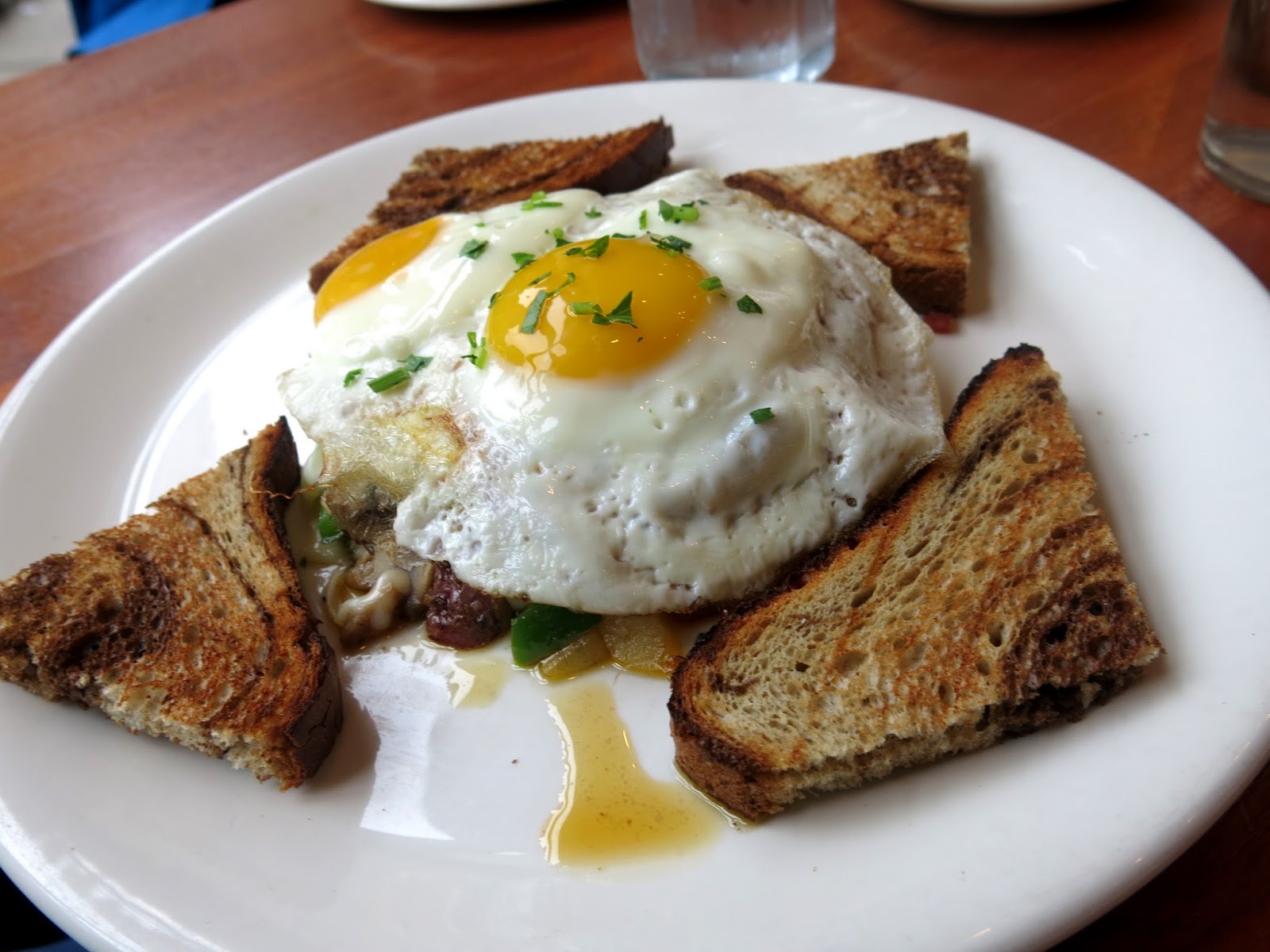 After their healthy starter, the two ladies ordered some protein packed entrees.  Bailey selected the Breakfast Hash from off the specials menu, which came with crispy pork belly, potatoes, two eggs, and toast.  Brandy couldn't help but smile at Bailey's plate as it was set down as she could see a little extra effort had been made in the presentation of a dish other restaurants might have ignored.  The hash had been piled neatly in the middle of the plate with the two fried eggs topping it and four pieces of toast laid out like the points on a compass.  "A lot of other places would have just thrown the toast on the side and have done with it," Brandy smartly observed, "Things like that go far in my book."  Brandy and Bailey were again impressed when their sweet and enthusiastic waitress brought a selection of condiments to the table, explaining that the everything from the jams to the ketchup had been made in house.  Of course, the taste of the food was also quite important, and Bailey reported that the hash was flavorful, hearty, and indulgently rich.  "The eggs are really what brings everything together," Bailey commented, dipping one of her toast points into some of the yolk. 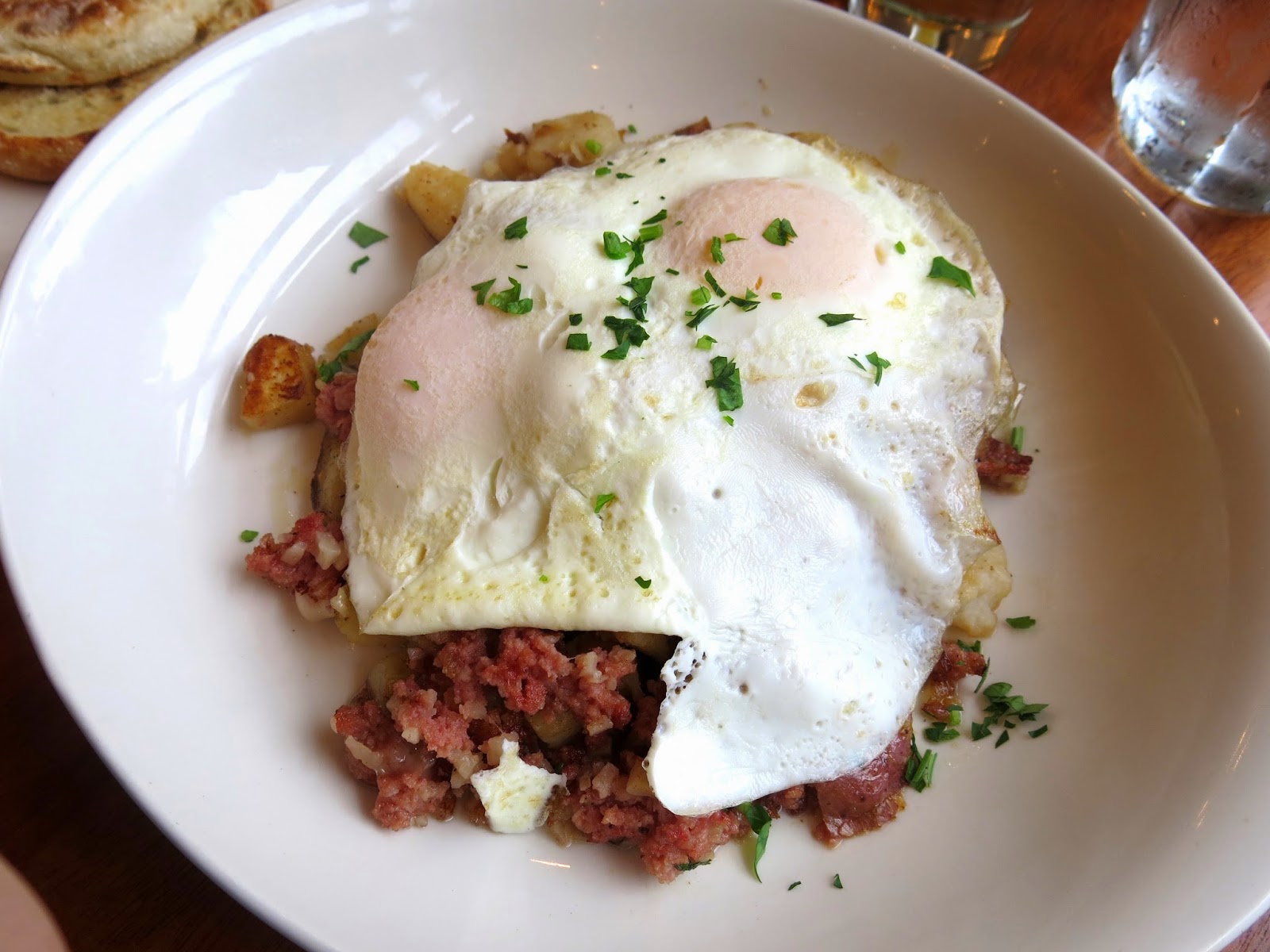 Brandy selected the Emerald Isle Breakfast Bowl, which came with corned beef, Swiss cheese, house potatoes, and two over easy eggs.  The corned beef was fatty without being greasy and not overly spiced, which Brandy greatly appreciated, as some corned beefs can salty palate killers.  The bed of red potatoes underneath the meat were tender and silky, though Brandy wished they had a little bit of crunch to contrast with the rest of the dish.  Like Bailey's hash, Brandy felt the broken yolk of the eggs really helped to bring all the flavors in the breakfast bowl together. 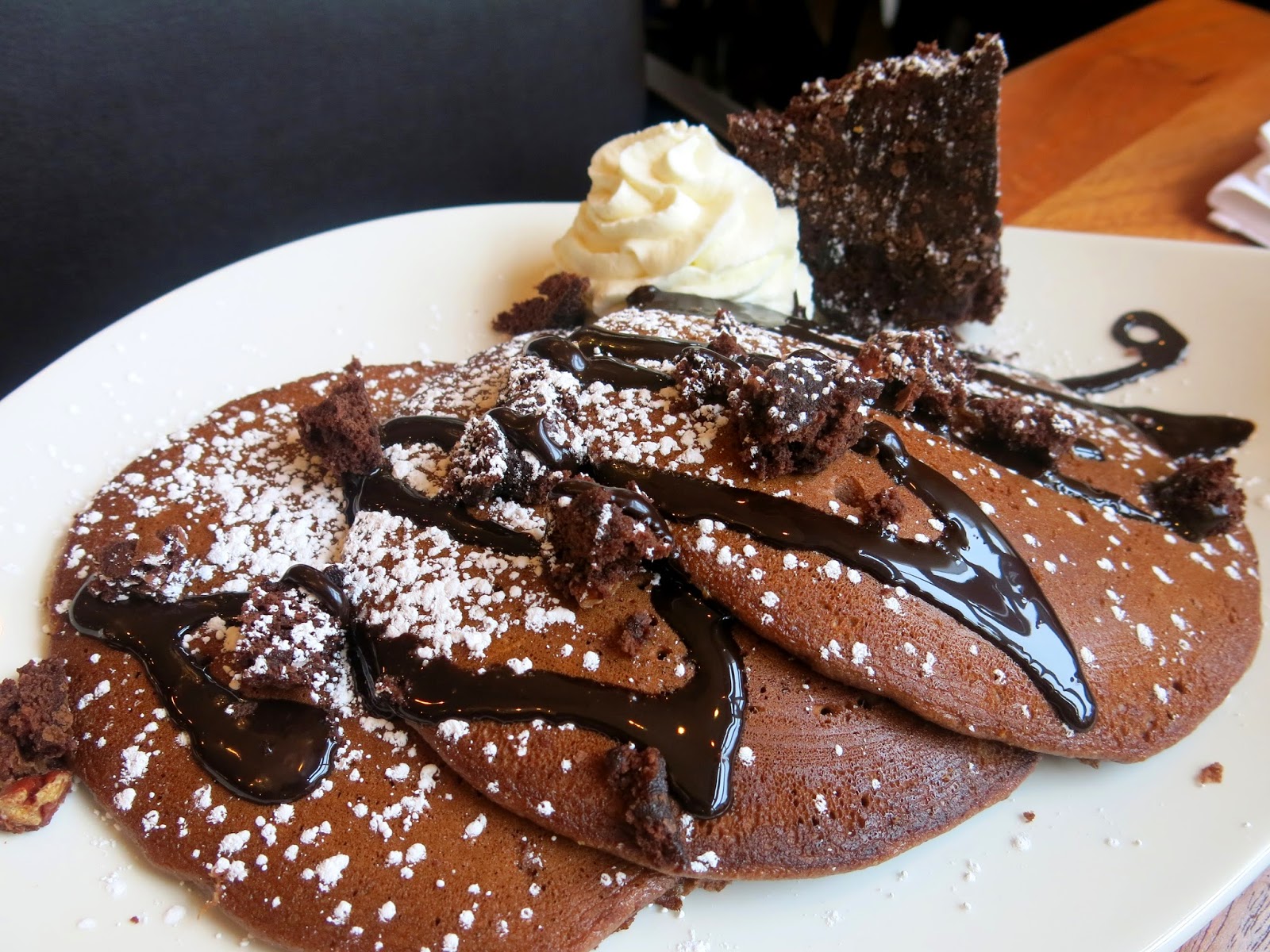 To finish off, Brandy and Bailey split an order of Double Fudge Brownie Pancakes, though when the confection was brought to the table, both ladies secretly wished they didn't have to share.  The pancakes were very dense (Brandy very much liked that the menu specifically described the pancakes as being "dense" so that diners knew exactly what they were getting) and had a nice bittersweet chocolate flavor.  The bits of brownie scattered across the top just added to the decadence of the dish, turning it from a breakfast treat to more of a dessert.  "I think I may need to take a nap," Bailey said, swooning after a few bites of the heavy, yet delicious pancakes.  "Come now, girl.  Steel yourself.  We've still got lots of shopping to do today.  You can sugar crash later."

Before leaving, Brandy and Bailey actually caught up with the Meli's executive chef, Frank Georgacopoulos, who helped to develop the concept of the restaurant way back in 2006.  His philosophy that breakfast should be given the respect it deserves as the most important meal of the day immediately endeared him to Brandy, who couldn't help gushing over everything, from the house made ketchup to the informative and extensive menu.  "I think I could have ordered anything off that menu and been happy, which is saying a lot, as I'm pretty picky," Brandy told him.

After a very pleasant, filling breakfast at Meli Cafe that had obviously been crafted with love and care, Bailey did start to feel a surge of energy that could get her through the rest of her shopping excursion with Brandy, but just in case, she ordered a cup of the magical green juice to go.  "Alright, I can do this," Bailey told herself as she gathered up her piles of Christmas bags, and looking up to find Brandy already halfway down the road in front of her, she took a large swig of her juice and hurried along after her friend.

The writers of this blog were invited to dine at no charge by the restaurant in exchange for an honest review. 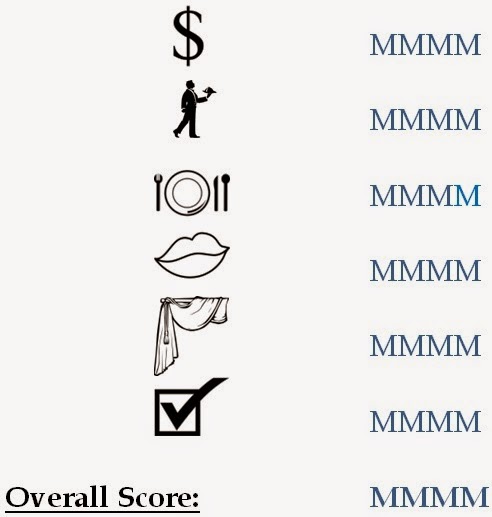