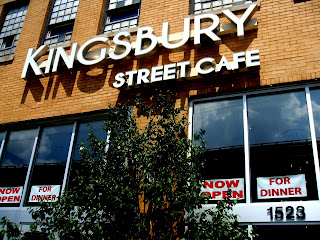 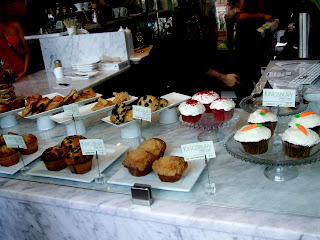 Being the well traveled seeker of adventure that she is, Brandy has called many places home over the years, from her modest country estate in Suffolk to her little villa in Venice to her one bedroom loft in New York City.  As we all know, her current home of Chicago has rendered all her previous dwellings obsolete and provided enough wonders from all over the world to keep her interested, entertained, and well fed.  But to Brandy, the concept of "home" has always meant something very specific. "A warmth of the gut," is what she calls it, and though many restaurants can claim they serve "home style," "comfort food," or even "nostalgic dishes," Brandy's "warmth of the gut" is harder to come by.  "The only way I can describe it is like coming in from the snow and knocking back a bit of whiskey.  Its a comfort that starts in your stomach and spreads to the rest of you.  That's home." 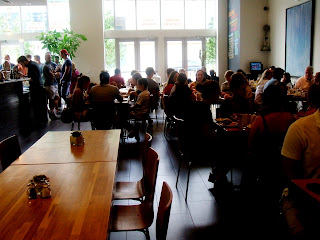 In search of some true "warmth of the gut" Brandy took a party that not only included Birdie and Biscuit Brown, but also Birdie's brother Boudin (a dedicated military man just like his sibling) to Kingsbury Street Cafe in Old Town.  They were greeted at the door by a small crowd of people, waiting to be seated, but they were not greeted by a hostess.  Apparently, what seemed to be a very busy morning had forced the hostess into helping on the floor by running food and drink to various tables.  Eventually the party was able to put in their names and after about 15 minutes, they were escorted to a table near the back of the room.  The space was wide open with very high ceilings, which while visually stunning did create a rather echoey quality to the room with made conversation somewhat difficult.  The over all appearance came across as very clean, yet warm. 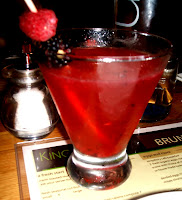 A menu of sumptuous delights befuddled Brandy and friends, so in the mean time they ordered a round of drinks: a Strawberry Melon Mojito for Biscuit, regular old Strawberry Melon juice for Birdie, Orange Mango juice for Boudin, and the Kingsbury Martini (vodka, raspberry, blackberry, and lime) for Brandy.  The juices were lovely and fresh, but the cocktails were truly delicious.  Brandy's martini had a very pleasant sweetness to it, but had perhaps a little too much bite from the alcohol ("If I'm not drinking vodka straight up, then I don't want to taste it," she explained).  Biscuit's mojito had the table's eyes rolling back in ecstasy as it was passed from person to person (Boudin actually saluted the drink after taking a sip).  "This is more refreshing than sitting on a block of ice in my under things!" Biscuit exclaimed. 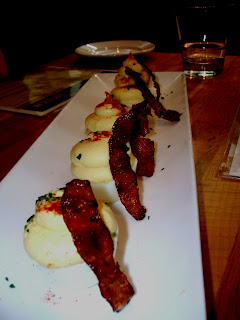 To start out the table ordered some Deviled Eggs.  Beautifully presented, the eggs had a wonderfully mustardy flavor while being incredibly light and fluffy.  Each came with a very thin strip of bacon, which added a touch of richness.

Next, they ordered something sweet to share, the Dark Chocolate Stuffed French Toast, which came with orange zest and fresh raspberries.  The toast was cooked perfectly and tasted of custardy egg.  The orange zest really came through the chocolate to add a new and interesting dimension to a very traditional dish. 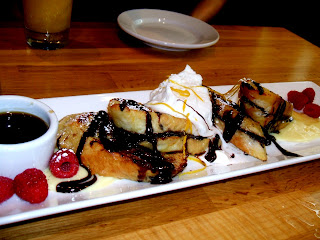 A very large party of what Brandy supposed to be a bride to be and her friends held up the kitchen and service for a bit, meaning that their entrees took quite a while to reach the table.  Birdie began contemplating an invasion of the said table, as he tends towards war time planning when he gets hungry.  "We'll take their eggs at dawn!" he whispered frantically, "Spare no bacon, but a slice of toast to each man who comes back alive!"  Just before he and Boudin launched an all out assault, the food arrived. 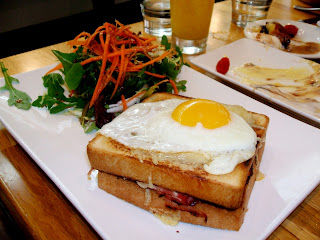 Boudin had ordered the Croque Madame, a traditional yet well made version of the French favorite.  "Sir!  My report on the ham is extremely positive Sir!" Boudin...well, reported.  The bread, while thick, was fresh and lovely, while the ham was really scrumptious and high quality. 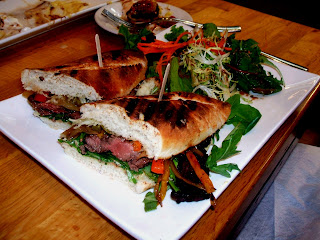 Birdie went for the Steak and Peppers, which he had thought would be more of a stir fry, but was really a sandwich.  This one came on a crunchy baguette, which Birdie rather enjoyed.  The meat was tender, pink, and flavorful, while the vegetables that adorned it lent an excellent splash of color. 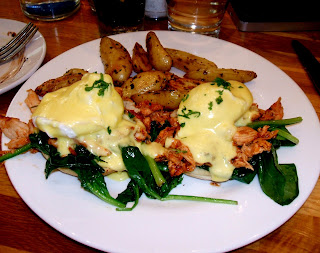 Biscuit favored the Kingsbury Benedict, a twist on the perennial brunch favorite with BBQ chicken and spinach.  Though the flavor of the chicken was good, Biscuit longed for a bit more of that BBQ zing.  "Maybe a little bit of the spices in the Hollandaise?" she said.  In this version, the eggs were perched on top of a sort of traditional English muffin, though Biscuit feared hers had been over toasted,as they were almost impossible to cut through, nearly sending her knife flying across the table (Birdie yelled "Charge!" as the cutlery hit him and Boudin was near to jumping on Biscuit before order could be restored).  The potatoes on the side looked appetizing enough, but very much flavorless and a little grainy. 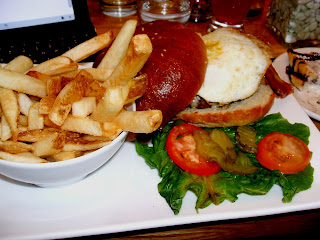 Brandy chose the House Burger topped with Gruyere cheese, maple glazed bacon, and a fried egg.  The burger itself was thick and juicy, though just the tiniest bit over cooked (Brandy had requested medium rare, but there was no hint of pink to the meat) and the bun was absolute perfection.  The bacon lent not only a nice crunch, but also a lovely sweetness.  Sadly, the fries on the side of the dish were also pretty flavorless, though their texture was perfect.

With prices set to reflect the quality of ingredients, Kingsbury Street was no bargain buy to be sure, but wasn't a wallet buster either.  Although the service was slow and patchy, there was an unmistakable warmth to the people and the atmosphere that could not be denied.  And while it may have been the enormous burger in her stomach, Brandy had an unmistakable "warmth of the gut" leaving Kingsbury Street Cafe, and sometimes that is a feeling worth waiting for. 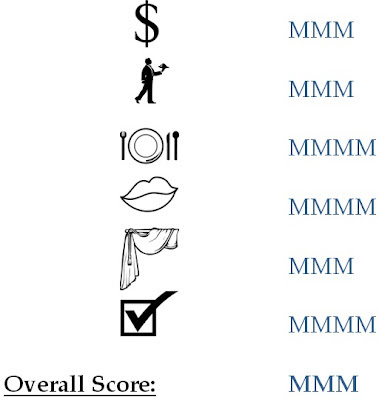