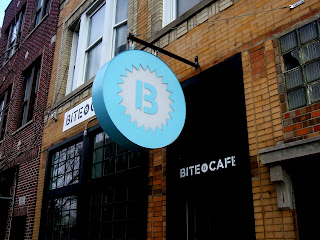 Minimalism.  Not something that Brandy is in favor of.  There have been more than a few incidences where Brandy has been dragged from a museum for shouting obscenities at a Barnett Newman or Piet Mondrain painting.  Brandy's philosophy of art is that if she can re-create it, its not art.  "Art," Brandy says, "Should be done by talented people to express their talents.  Minimalism is about talented people choosing not to use their talents."  If one was to visit Brandy's home, one might consider it cluttered, but its only because of the array of artistry Brandy has collected over the years.  In short, if there is anyone more anti-minimalism than Brandy, they've probably been seen on the television program "Hoarders." 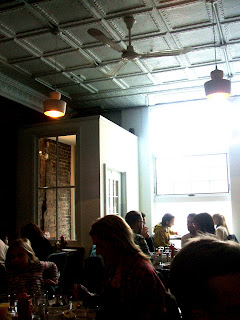 When visiting Bite Cafe this week, Brandy was confronted with minimalism the second she stepped in the door.  Barren brick walls lent focus to the high tin ceiling, which while lovely, cast a sort of cold industrial feel across the room.  After looking around helplessly for a few minutes while the flock of young, hip waitresses rushed from table to table, Brandy was finally given a wait time of 10-15 minutes.  She spent this time in a space next to the dining room which seemed to be a holding room for musicians performing in the attached bar.  The wait became closer to a half hour before Brandy was finally escorted to a stool at the counter, where she was continuously bumped by patrons and servers alike.

Right away she ordered a cup of Earl Grey, which came simply in a cup with no accessories like lemon or a spoon (while this is perfectly acceptable to some, Brandy has always been a stickler for a little bit of tea service at brunch). 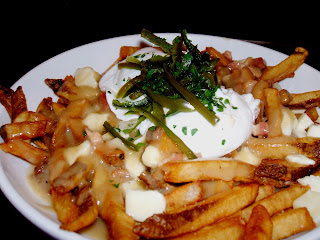 Brandy chose two dishes to sample, the first of which was the Breakfast Poutine.  For those not in the know, poutine is an import from our Canadian neighbors that has been co-opted lately by Chicago's trendiest brunch spots.  In general its a gathering of French fries and cheese curds covered in gravy.  Bite Cafe's twist included a poached egg and pickled chili slices with a bacon gravy covering the fresh cut fries and briny cheese.  While a lovely snack for a few bites, Brandy could not imagine devouring the entire dish as one's breakfast.  She loved the smokiness of the gravy (which could be substituted for mushroom gravy for vegetarians) and the crispiness of the fries, but wished the dish had been set under a broiler for a minute or two so that the cheese would have been meltier and gooier.  She also felt the egg was a bit overkill and had been included only to make the dish more "breakfasty." 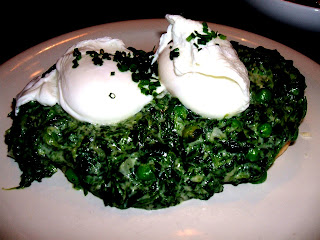 Her second dish was called Eggs Duncan, a sort of eggs benedict with poached eggs over home made biscuits and topped with creamed spinach and fresh green peas.  While Brandy did love the light and crumbly biscuit, she found the spinach concoction to be very bland, and for the first time ever in her life, Brandy reached for the salt shaker (Brandy firmly believes that to add salt or pepper to a dish table side is an insult to the chef).  She wished for a bit of crisp bacon to break up the mushiness of the dish.  Mostly sadly of all, the poached eggs that topped the dish wear under cooked with still liquidy whites.

Brandy found this minimalist breakfast very underwhelming to say the least.  After all, Brandy's greatest breakfast joys come from dazzling sides, exciting beverage choices, and an actual table to sit at.  She also found it curious that the pricing of the menu (over half the menu was around $10) was the one thing that wasn't minimalistic. 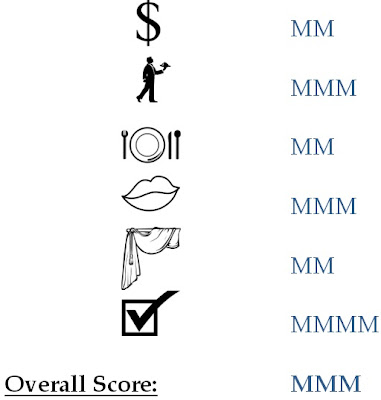