Doughnut Vault or Dough and Nuts! 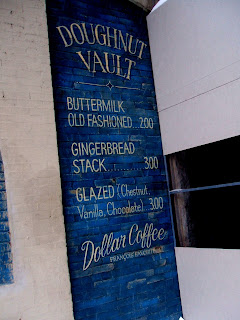 A few years ago, it was cupcakes.  Beautiful gourmet confections, no longer the stuff of lunch boxes or 2nd grade birthday parties, these little bites of joy were made over, made under, and made to grow the heck up.  And now, the doughnut seems to be headed for that same glitzy bulls eye.

The harbinger of this newest pastry trend in Chicago seems to be The Doughnut Vault, a tiny store front operation right off the brown line in the River North neighborhood.  Open for just over a year, this tiny corridor has already found an obsessive following, or as Brandy referred to them, "The people who put the 'nuts' in the dough.'" 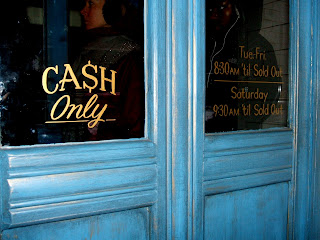 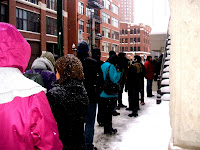 Relying heavily on internet tools like Twitter and Tumblr to interact with their consumers has resulted in an almost cult like devotion of people prepared for the long haul wait.  This spot has no closing time; they only stay open for as long as the doughnuts are in supply.  Those in the know will line up an hour or so before the doors even open, and those who couldn't make it that early rely on the constant tweets to tell them how many people were more ambitious than they.  On this particular Saturday (Doughnut Vault is closed on Sundays) Brandy joined the line 10 minutes after the doors opened to find 60 people in front of her, and this was on a snowy, freezing cold Chicago morning.  These people knew what they were doing too; most had a thermos of warm coffee clutched in one hand and their phones clutched in the other so that they could be updated on the doughnut's status.  There was one mother/daughter team who would split their time outside with one standing in line for 5 minutes before switching off with the other to sit in a warm car parked just down the street.  Inexplicably, there was also a man who had brought his 3 week old baby with him to stand in line for what must have been an hour in the snow.  Every time someone emerged from the store, clutching their unassuming brown boxes, stares of hatred and dread would follow them from those still in line.  "These must be pretty fabulous doughnuts!" Brandy thought to herself as she shivered and jumped from one foot to the other to keep them off the frigid ground. 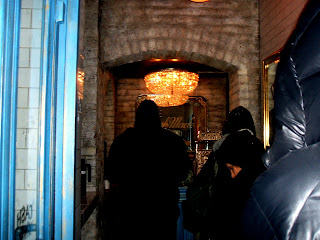 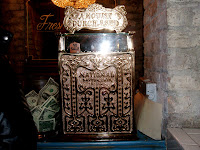 Once inside the building, Brandy realized the reason for the line outside, which was that these was almost no room to this little place.  It was quite literally a windowless stone corridor with maybe enough room for 6 people, not even enough room for a table and chairs, just a counter at one end and a coffee bar to the side.  A lovely chandelier hung from the low ceiling over a turn of the century cash register and a sign that declared "Cash Only."  A cheerful girl was quickly filling orders for people as they stepped one by one up to the counter, shouting the flavors as she went so that everyone within ear shot should have no excuse for not knowing what was on offer once they'd reached the front.  On this particular day, Doughnut Vault's regular menu of 5 different kinds of doughnuts (and coffee for $1) was supplemented by 2 special flavors, so after 45 minutes of waiting for these miraculous rings of fried dough, Brandy simply said to the girl "One of each," and apparently was lucky to get all of them, for the people behind her were over heard telling the crowd outside that they had gotten the last of one of the daily specials. 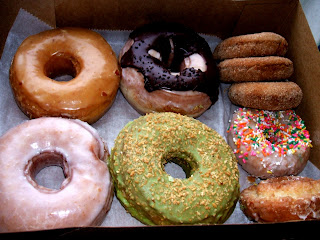 Once she got them home (at about 11:30, which is exactly when the tweet came in that they had completely sold out for the day, two hours after opening), Brandy was able to defrost herself and enjoy them properly.  There was definitely something for everyone in the mix, from gigantic fluffy yeast doughnuts to old fashioned buttermilk to moist cake.  $19 bought 9 doughnuts all together, which does seem a little pricey on the surface, but when taken into consideration the doughnuts size and quality, could be forgiven slightly. 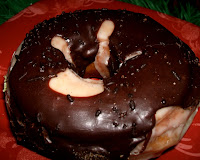 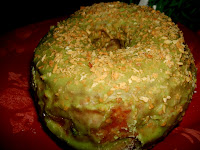 Brandy started in with the enormous yeast doughnuts, which came in vanilla, chocolate, chestnut, and one of the specials of the day, pistachio.  The texture of the doughnuts was nice, with more chew than Brandy was expecting.  The vanilla and chocolate were pleasant enough, but not particularly special.  The chestnut had a nice buttery note to it, and Brandy liked that such an unusual flavor was one of their regular choices.  The pistachio was probably the most flavorful, with the toasted coconut topping making for a nice touch. 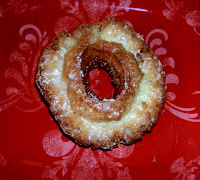 Next was the Old Fashioned, a crunchy, cakey doughnut made with buttermilk and topped with vanilla glaze.  This was probably Brandy's favorite of the bunch because of the crisp outside and doughy inside.  The glaze wasn't too sweet, with the vanilla flavor came through as a very subtle flowery aftertaste.  Brandy decided to pop this one in the microwave for 30 seconds or so, which made all the difference. 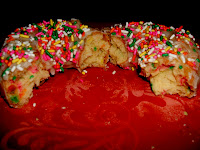 The second special of the day was the Birthday Cake, a yellow cake doughnut with vanilla frosting and sprinkles both on the outside and inside.  Brandy couldn't help smiling at the little bursts of color inside the cake, and liked that the doughnut wasn't too heavy, as some cake doughnuts can be. 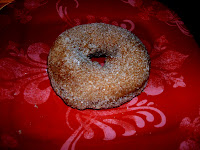 Lastly was the Gingerbread Stack, a trio of smaller cakey gingerbread doughnuts sold at the same price as the singular larger ones.  Brandy found them to have quite a good deal of spice to them, with a little warmth from the cinnamon lingering on the tongue long after the doughnut was gone.  The sugar coating on the outside did help to balance out the spice, and Brandy of course enjoyed sucking it off her fingers, though she nearly choked when a bit of her nail polish came with it.

In the end, Brandy came to the conclusion that if these doughnuts had been served to her in a nice, sit down cafe with a little coffee drink, she might have enjoyed them more, but with the circumstances as they were, she would probably not suffer through the same kind of experience again.  The best she can hope for is that the lovely people who make and serve these nice confections eventually gather enough money for a calmer, bigger, and more adaptable environment. 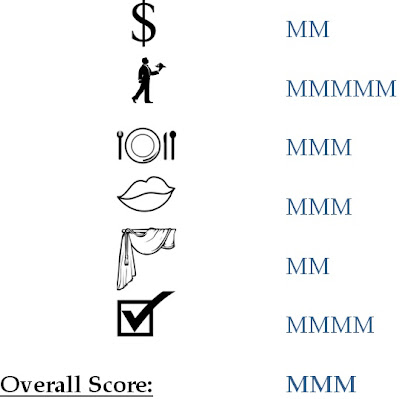 Posted by Bunny and Brandy at 8:41 AM