And now, a quick story to preface Brandy's adventure this week:
It was a balmy summer day in London in 1967 when Brandy ventured into a local record shop to purchase a vinyl copy (as indeed all music was vinyl in those days) of Mozart's Greatest Hits when she quite literally ran into a well dressed young man with shaggy blond hair.

"Pardon me, Madam," the young gentleman said as he side-stepped Brandy in order to browse through a collection of Anthony Newley soundtracks.  Brandy noticed a few flecks of glitter on the man's otherwise perfectly shined shoes.

"You've got stardust on your loafers there, fella" Brandy pointed out to him, not sure if this was the new thing for the young and hip to do, or if the gentleman had simply trodden in an arts and crafts project.

The young man smiled at her with all the charm he could muster and said cryptically, "I've been experimenting with a new look."

Brandy pulled a packet of cigarettes from her coat pocket (no one thought twice about smoking indoors in those days) and the young man eyed it hungrily. "Could I bum one of those?" he asked sheepishly.

Brandy studied him for a minute, but didn't wish to seem up hip around the young.  "A ciggy for you, stardust," she said, handing him the thinnest one in the pack.  He nodded his head in thanks and went back to exploring the stacks of record albums.

A few years later when Brandy was once again in that same record shop (this time in search of The Best of Puccini), she noticed an album in the window entitled "The Rise and Fall of Ziggy Stardust" by some young man with shaggy blond hair named David Bowie.

Now knowing the face of David Bowie rather well, Brandy was surprised to see it show up on a flier for a brunch at Chant in Hyde Park, an event she as well as friends Biscuit and Birdie Brown had been invited to by new head chef Chris Hora.  Previously known mainly for Asian fusion dishes (as indeed the slightly industrial decor still strongly referred to this Asian influence), Chef Hora has decided to take Chant into a more eclectic space, with emphasis on "farm to table" sustainable, organic dining.  So what did The Thin White Duke himself have to do with all of this?  "It's his birthday," Brandy informed the table, "And he's a bit eclectic too, I suppose." 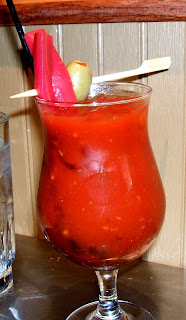 The table started off with a round of drinks.  Biscuit and Birdie settled themselves with a pair of Bloody Mary's (Chef Hora pointed out that he makes his own tomato juice for the cocktails, as well as infusing the vodka with cilantro), with Birdie getting his extra spicy, and Biscuit choosing the very non-vegetarian "Bloody Bull," a traditional Bloody Mary with an infusion of liquid beef gelatin.  Both were very flavorful and fresh, but the Bloody Bull was definitely the more interesting of the two, with the beef flavor permeating the drink and creating a more unctuous mouth feel.  "It's like a steak dinner in a glass," Biscuit said cheerily, while Birdie eyed her glass with envy.  Brandy chose the more traditional mimosa.  While it was lovely, bright, and well balanced, Brandy couldn't help wishing for some more interesting twist on this brunch favorite to go along with the "Bull Ride," as Biscuit called it. 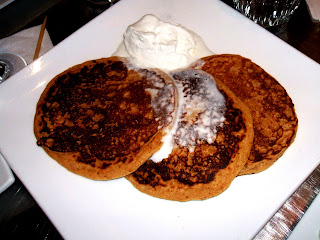 For starters, the table split an order of Five Spice Sweet Potato Pancakes, which came served with a vanilla whipped cream.  The pancakes had the perfect kind of texture, with a nice crispness on the outside and a creamy inside.  The spices insured that the cakes weren't too sweet, but didn't overpower the delicate cream on the side.  Brandy wondered at this being the only sweet option available for brunch, until she found out about the dessert menu.  More on that later. 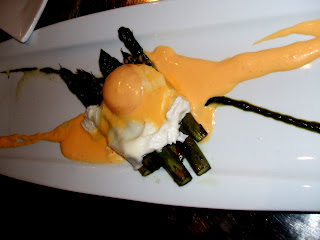 Upon hearing about the special of the day, which was roasted asparagus topped by an over easy egg and hollandaise sauce, Brandy insisted on trying it.  The hollandaise was lovely and buttery, which went very well with the crisp vegetation.  The table had to fall to scraping the plate with their forks to collect all of the delicious sauce, as there was nothing to sop it up with. 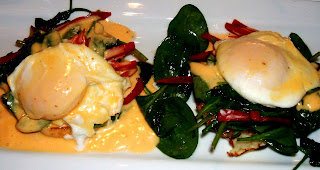 For his entree, Birdie chose a twist on a benedict, with red peppers, spinach, bacon, and topped with more of the same lovely hollandaise, which this time had been mixed with a bit of sriracha.  The dish wasn't quite as spicy as Birdie would have expected, but he said he did enjoy the touch of vinegar the sriracha lent to the sauce.  The peppers blended nicely with the other flavors, not over powering them as peppers can sometimes do, and the bacon stayed perfectly crispy.  Chef Hora explained to Birdie that this was because the bacon had been cut from the cheek of the pig, and had only been salted and air dried.  "I was air dried once in the war.  Hung out in the elements on a clothes line for nigh on three weeks before I managed to wriggle myself free.  I felt pretty crispy too," said Birdie.  Silence descended on the table. 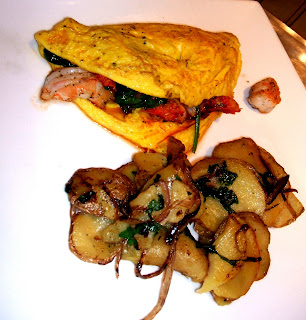 Biscuit chose the Angry Shrimp Omelet ("Are angry shrimp like those angry birds I've heard people talking about?" she asked the cheerful waitress) with a side of house potatoes.  The shrimp's anger seemed to come from a flavorful spice rub, which while packing plenty of punch, didn't kill the taste buds.  The veggies inside the omelet had a nice tangy bite to them, but according to Biscuit, they were nothing compared to the potatoes.  Sliced into rounds, the potatoes were pleasantly soft with an unidentifiable Asian flavor to them that Biscuit really enjoyed. 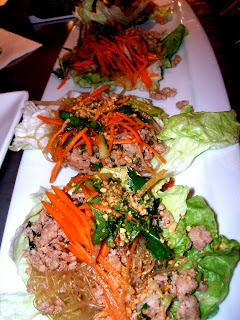 Brandy opted for the Lettuce Cups, a sort of nontraditional choice for brunch.  "I guess I'm just a Rebel Rebel!  Hu?"  Brandy said, but upon realizing her table mates didn't know David Bowie's back catalogue as well as she did, she quickly dove into her second mimosa.  Though a little messy, the cups, which were filled with ground turkey, bean thread noodles, and assorted veggies, were quite flavorful and refreshing.  Brandy thought to herself that she wouldn't mind snacking on these on a hot summer morning, but with how warm this winter has been it wouldn't have made much of a difference. 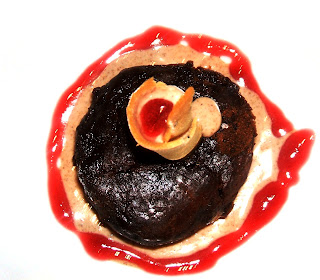 Just when they thought they were stuffed, Chef Hora (who Brandy noted was a bit of a "rocker" himself) insisted they try one of his desserts.  After much hemming and hawing over the delectable sounding choices, Birdie declared the winner to be the Chocolate Fondant Cake, which came with a berry anglaise and a sesame twill.  The cake was unbelievably creamy and light, tasting almost like a mousse rather than a cake. The anglaise, made with white raspberries and blueberries among other things, provided a wonderful tartness, and the sesame twill was a delightful bit of crunch in an otherwise soft and supple dessert.

All in all, a wonderful way to spend a birthday, even if it was for someone who was only present in the music being played.  Most plates ranged around $10, which for decent sized portions and genuine quality from a knowledgeable chef, isn't a bad deal at all.  And just in case you were wondering if Brandy ever spoke to Mr. Bowie again, let's just say this: in cockney rhyming slang, "China" means "old friend," which perhaps is why Brandy has always favored the song "China Girl." 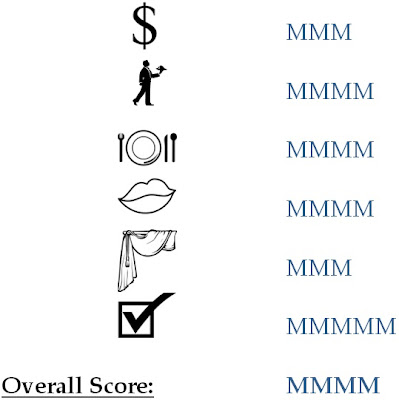 * The writers of this blog were provided with a free meal from this restaurant in exchange for a review.  The opinions of the writers' were not effected by this transaction.
Posted by Bunny and Brandy at 8:19 AM