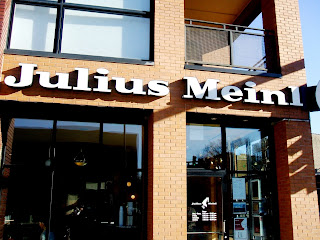 A few weeks ago we discussed Brandy's fear of the Dutch, but today we speak of her love for Austria, or specifically one particular Austrian.  Once in her youth, Brandy fell head over heals for a strikingly handsome mathematician one summer when she was traveling through Austria.  She even went so far as to take a job as a beer wench in a local pub, just so she could watch him sip his afternoon beer while trying to solve Fermat's Second To Last Theorem.  Day after day he would puff away on his pipe, resting the the leather elbow patches of his tweed coat delicately on the table as he scribbled this integer and that numerator before inevitably crossing everything out in a big black blob of frustration.  Brandy watched this for a good three months straight before finally deciding to talk to him and discovering he didn't speak the tiniest bit of English, and as her Austrian wasn't exactly up to par (there is a rumor that Brandy could have spoken to him in his mother tongue quite fluently, but at the time she was spying for the British government and her fluency might have blown her cover) the romance was doomed to fail. 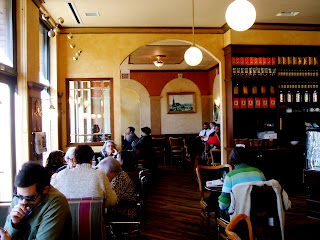 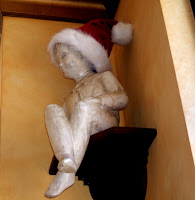 Regardless of that little hiccup, Brandy has since then acquired a great love of Austrian food, which is what brought her this week to Julius Meinl on Southport.  The simple, classic interior was enough to put her at ease almost at once, and the soft classical music mixed with the tiny tinkle of silverware only helped to intensify the European coffee house feeling.  A variety of tables were to be had, from booths and single chairs to sweet little comforters and couches, all nicely spread out across the room.  A slightly stand-offish waiter dropped off a menu (Brandy supposed to herself that the waiter's demeanor somehow brought even more of a European feel to the place). 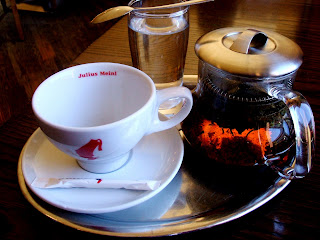 Despite Julius Meinl's famed coffee, Brandy picked a lovely white tea called Silver Cloud for her beverage.  Brought on a tray with all the implements needed, including a small ginger snap cookie, the tea was very light and fruity, with a soft feeling on the tongue and a sort of caramelly finish.  If the morning had been colder, Brandy might have longed for something more full bodied, but on an unusually warm winter's day like that one, the lightness of the tea was more appreciated. 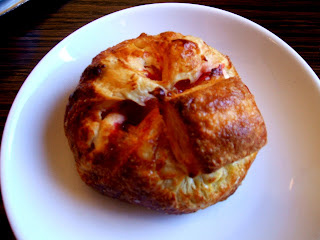 To start, Brandy ordered a raspberry Danish, which she was delighted to see came to the table hot.  Though the pastry was buttery and flaky, she was dismayed to see a severe lack of jam in the confection. 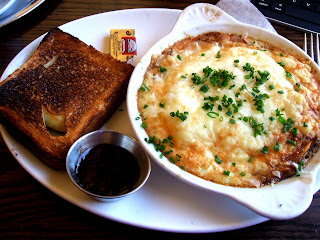 As her main course, Brandy chose baked eggs over a Rösti potato pancake with caramelized onions, Parmesan cheese, and truffle oil.  The dish had been topped with chopped chives, the scent of which wafted up to Brandy's nose in the most enticing way.  The cheese and truffle oil lent a wonderful earthiness to the richness of the eggs, which were incredibly soft.  Brandy marveled at how the yolks were perfectly cooked, having a texture like the finest velvet.  The shredded potatoes on the bottom of the dish remained crunchy, tasting like a much more sophisticated version of hash browns.  On the side, Brandy chose a slice of brioche toast, which came served with fresh strawberry jam.  Brandy liked the choice of brioche for her toast, as it was more delicate and less crusty than a piece of white or wheat. 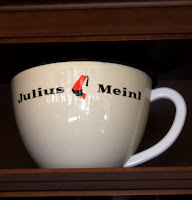 Although no good looking mathematicians were in sight, Brandy couldn't help but smile while finishing the last of her tea.  By the end of the meal, even the grumpy waiter seemed to have lightened his mood as he dropped off the check.  Not even $20 for tea, a pastry, and an entree can't be beat in terms of value.  Brandy was very glad to have found this little piece of Vienna so close to home, and even gladder to find that there is more than coffee to Julius Meinl. 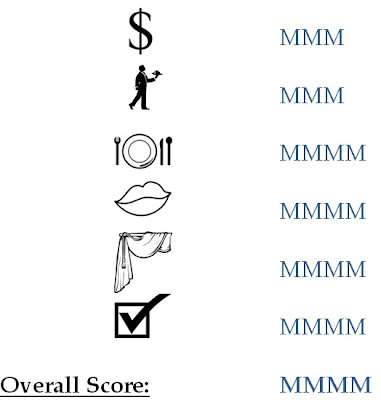 Posted by Bunny and Brandy at 8:54 AM