Mrs. Murphy and Sons Irish Bistro or No Overalls in the Chowder, but there's Guiness in the Mac and Cheese!

(Please enjoy the musical accompaniment below while reading this weeks' entry) 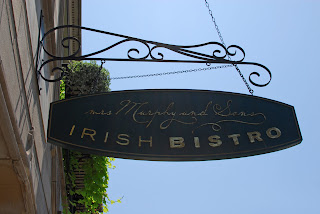 Celebrity is a funny old thing.  Exactly how many people need to recognize one for one to be considered famous?  According to an old Liverpudlian friend of Bunny and Brandy's who was in town not long ago, fame is in the eyes of the beholders, not the beholded.  So when Bunny and Brandy took their seats at Mrs. Murphy and Sons Irish Bistro and found themselves being beholded by the occupants of the table beside them, they didn't quite know how to react. 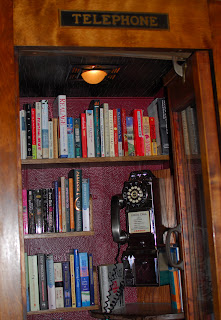 After a few moments of awkward glances, the wide eyed duo beside Our Ladies finally got up the courage to ask, "Excuse me, are you Bunny and Brandy?"  A slight nod from Brandy elicited a squeal of joy and a request that they might dine with Chicago's most "famous" brunch bloggers.  Bunny cheerfully gestured to two empty seats at their table and Our Ladies found themselves joined by their two biggest fans, who went by the names of Bubble and Squeak.

Mrs. Murphy and Sons is what Our Ladies have come to expect from an upscale Irish pub; dark woods and a typical assortment of bric a brak to convince one of its Celtic credibility, like a book filled telephone box, a tea set in a china hutch, and the most fully stocked bar one could hope for.  Several dining areas and a sidewalk porch provided a variety of places to enjoy one's meal, including a private party room and a lounge upstairs.
Looking over the entrees on offer, about half were traditional Irish fair like Corned Beef and Black Pudding, and the other half had Irishness thrust upon them by dousing them in some sort of alcohol. 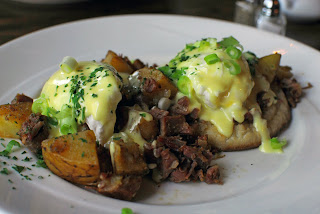 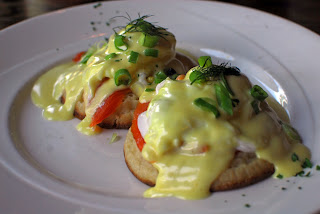 Bubble and Squeak, being ultimate fans, ordered a pair of Benedicts: for Bubble, the Smoked Salmon Benedict, and for Squeak, the Corned Beef Hash Benedict.  Both had a lovely Hollandaise sauce, but Bubble thought her eggs were a little under done (she had asked for over hard).  Bubble commented that she really enjoyed the taste of dill in her dish, while Squeak said the Corned Beef was amongst the best he'd ever had.


Brandy got two small dishes, as is her fashion: the Guinness Mac and Cheese (yes, dear reader, your eyes do not deceive you) and the Sticky Toffee Pudding Oatmeal Brulee.  The mac and cheese had a lovely buttery crumble on top, and the interior was a little soupy, but very creamy and rich, being helped along by the creamy stout.  The oatmeal took a little while to cool to an edible temperature, but once consumed was a wonderful mix of textures from the crunchy brulee top and the candied walnuts to the melted spiced butter and delicately cooked oats. 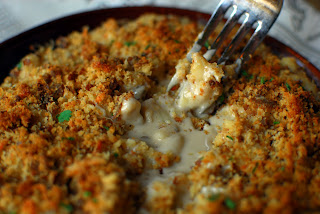 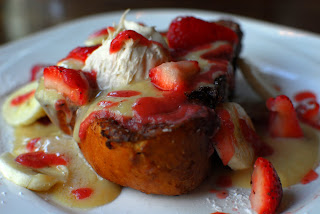 Bunny chose from the "Add Liquor to make it Irish" section of the menu and got the Bailey's and Bananas French Toast.  It came as a thick slice of brioche covered in strawberries, bananas, and a creamy sauce.  At first bite, the Irish Cream taste wasn't exactly present, though the bread was soft, sweet, and delicious.  But after the sauce had cooled a bit, the Bailey's became more present.  Bunny felt the strawberries were just on this side of not fresh, but otherwise she thoroughly enjoyed the dish.
The service was impeccable except for a slightly long wait for the check, but Bubble and Squeak didn't seem to mind the extra time with their heroes.  Befuddled by the experience of being so adored, Our Ladies wondered if Mrs. Murphy and her anonymous sons have ever gotten the same treatment. 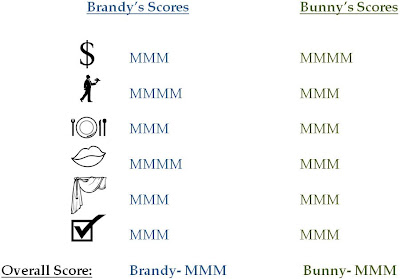