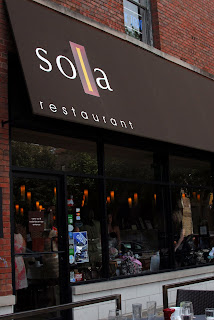 Dear Readers, it is our unfortunate duty to report some rather sad news.  We will not mince words, we will not waffle on and on, we won't even try to sugar coat this tearful news with tiny little delicate roses made of royal icing.  There is not point in avoiding it, no giving you false hope with "good news" before the bad.  We would never do these things to you, dear readers, we would never cover over the pothole of such information with a bunch of flowery words. We would never pause, freeze, delay, postpone, suspend, shelve, or look through a thesaurus to stall for time.  Now then...


Our dear and beloved Bunny has been called away by her darling husband Benedict to assist in his excavations and shall no longer be able to attend brunch with Brandy every Sunday.  Now now, don't worry, she won't be leaving us forever.  Bunny, from time to time when reception permits, will be filling a new role by leaving us "Post Cards" with fun little links, recipes, and more.  But it is with a heavy heart that we here present for you the story of the last regular brunch with Bunny and Brandy.

The chosen restaurant was Sola, an upscale Hawaiian themed restaurant in the North Center neighborhood (its actually just down the street from last week's entry, Mrs. Murphy and Sons Irish Bistro and was actually the original choice for last week, but had to be scrapped as the restaurant was closed for some silly little music festival of some sort).  The interior was a little stark, but bright, with some nice little touches in design but nothing to suggest what kind of food was about to be enjoyed.  "Maybe its a little played out, but just a picture of a pineapple would have sufficed," Bunny remarked. 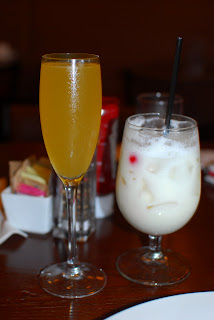 Drinks were ordered straight away, as Brandy wasn't ready to get overly emotional about Bunny's leaving and needed something to "stiffen my upper lip," as she put it.  Bunny ordered a Maui-Mosa, a tropical twist on the original with pineapple and passion fruit juice instead of orange.  Brandy decided on the traditional Pine Colada.  Sadly, the drinks didn't make it to the table before the appetizer...or before the entree.  Our Ladies watched as the bartender sauntered back any forth, lazily mixing and pouring, then continued to watch as the drinks sat...and sat...and sat, until they were finally brought to the table 25 minutes after the order was placed.  Sadly, they were not worth the wait.  Bunny's Maui-Mosa smelled rather odd and just tasted of champagne, as the juices had sunk to the bottle of the glass, and Bunny's Pina Colada was virtually undrinkable, tasting of cold, watery, rancid rum and nothing else. 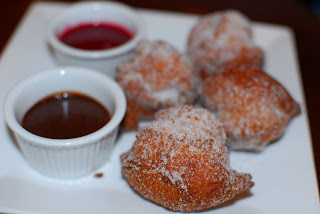 They began their meal with Malasadas, a sort of fried dough coated in sugar and served with warm chocolate sauce and raspberry puree.  They were nicely crunchy on the outside, fluffy on the inside, and all around lovely.  The sauces were the true standout though, with the raspberry being the favorite of the two, though the chocolate was brilliantly rich and deep without being too sweet.  Brandy thought she detected some flavor in the chocolate she couldn't quite name, until Bunny realized it was hazelnut. 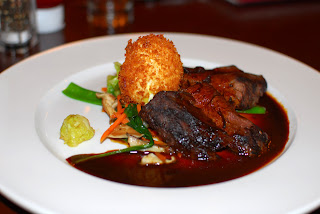 For her entree, Brandy selected the Steak and Egg, which was much more exciting than it sounds.  The "steak" was thin slices of tender wagyu beef covered in a red wine reduction and served over a mixture of crisp veggies (brussel sprouts, sugar snap peas, carrots, etc.), while the egg was actually coated with panko bread crumbs and fried whole, truly an impressive feat.  Once cut open, the egg yolk ran into the peppery veggies, mixing with the red wine sauce to make a delicious coating for everything on the plate.  The beef was melting on the fork and aided by just the tiniest bit of sweetness from the sauce.  A rather elegant and lovely dish in all. 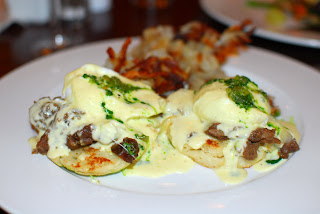 Bunny, or course, had to go for her old standby of the Benedict, but this time it came with braised beef short rib and pesto.  The meat was cooked to perfection, and the hollandaise was rather lighter and fresher than hollandaise of days gone by, tasting almost like sour cream.  The presentation did look a tad sloppy in comparison with Brandy's lovely plate, and the potatoes on the side was slightly under seasoned and soggy.

Food wise, Sola delivered on all fronts, but sadly everywhere else seemed to be lacking, especially in the drinks department (trust us when we say that the Pina Colada must have been bad if Brandy was unwilling to finish it).

And so, it is with a heavy heart that we send Bunny on her way to fun and adventure in her travels across the globe.  Bon Voyage, Bunny, and we hope you will be back to brunch with us and for us soon! 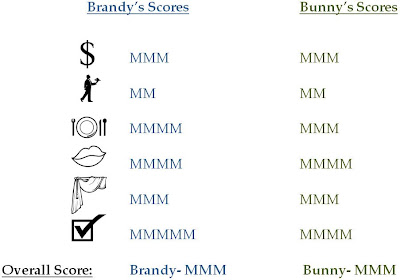 Posted by Bunny and Brandy at 8:42 AM