Kit Kat Lounge or The Home of Strange Feelings

Whilst dying her hair the perfect shade of blue (labeled as Starlight Glory), Bunny’s hair dresser Rico suggested the perfect spot for a Halloween brunch, The Kit Kat Lounge and Supper Club.

He handed her a flyer, boasting of a “Rocky Horror Picture Show Brunch,” (Bunny naturally assumed this was some sort of mountain climbing slide show). “Doesn’t seem like my sort of place,” Brandy was heard to remark when she was shown the flyer. “They have over 50 different martinis,” said Bunny. Brandy snatched the flyer, and with it crumpled in her fist, headed for the door.
Birdie Brown tagged along again this week, having been left on his own whilst his dear wife Biscuit recovered from having a hangnail removed. The party of three were taken to the back room of the lounge, past servers dressed in corsets, platform boots, and various colorful wigs, while movies played on the walls and disco balls twirled about the space.

Our Ladies and guest were presented with the choice of a prix-fixe 2 course menu (which included bottomless bloody martinis or mimosas), or the a la carte menu. While the flyer promised drinks and food themed for the “Rocky Horror” brunch, the choices didn’t seem any different than normal brunch faire.
Our Ladies and guest all opted for some of the a la carte options, with Brandy partaking of the mimosa while Bunny and Birdie chose the bloody martinis, which were all presented with some amusing plastic vampire fangs. Birdie commented that, “It was awful nice of them to provide me with some false chompers, as I’ve left mine at home.” (It is worth noting that on Sundays, all martinis are ½ price and there are many delicious varieties to choose from, if Brandy hasn’t cleared them all out before you arrive.)

While waited on by a very attentive waiter, the food took an inordinately long time to present itself to the table. In the meantime, Our Ladies were presented with some cinnamon sugar fritters and blueberry compote to snack on. They were a tad dry and crunchy, but better than nothing. As a feast for the eyes, the splendiferous Madam X entertained the multitudes by singing musical numbers from Rocky Horror. “It’s a movie,” Brandy explained, “People attend screenings dressed up as perverts and throw things at each other, from what I understand." Birdie got quite a bit of attention from Madam X, as well as the scantily clad servers. “Such stout, strong featured women here,” Birdie chuckled, “I like a handsome woman.” Bunny and Brandy had long ago deduced that these “women” were not all they appeared, but didn’t have the heart to explain things to the dear man.

Finally, the food arrived. Birdie chose the “Big Blue,” a crispy and fluffy, yet sparsely plated waffle, here presented with three syrups: Nutella cream, more blueberry compote, and cayenne maple (the latter of which was reportedly the best of the three). Birdie also ordered a side of Stone Ground Grits, which turned out to be the best thing any of them tasted that morning. 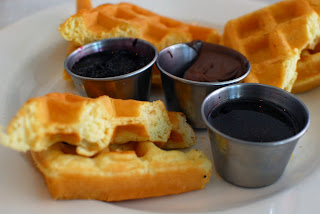 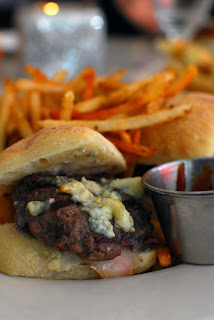 Brandy’s meal consisted of “the Big Bad Wolf”; four sliders with blue cheese and Cajun fries. Brandy felt the sliders were a tad over done, ruining the flavor of what was obviously a very high quality beef. The fries were thinly cut and crispy, but tasted no better than a standard “steak fry.” 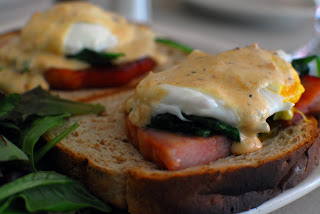 Bunny’s plate was the most eye catching, presentation wise. She had ordered the “Big Daddy,” which was eggs Florentine with ham and a tangy béarnaise sauce, severed over whole wheat toast and accompanied by a small greens salad. The eggs were well poached, but the toast was dry and hard to eat, and the greens were undressed for their début.
While the food may not have been worth the wait, the experience of brunching at the Kit Kat Lounge did put Our Ladies and their befuddled guest in the proper Halloween spirit for just about $25 a person. Brandy made plans to return that night and make a 50 course dinner from the martini menu. 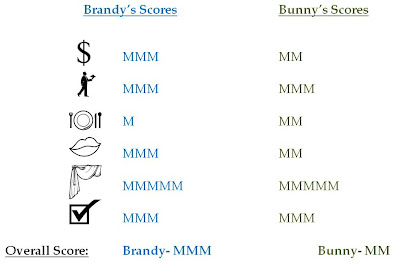 Posted by Bunny and Brandy at 5:38 PM