Original Pancake House or Back to Basics 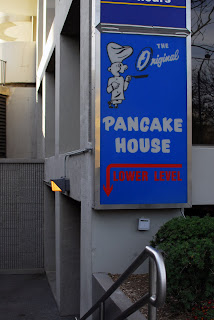 Our ladies have been eating pretty richly these past few weeks, so this Sunday saw them craving something a little more down to earth. They chose The Original Pancake House, a nationwide franchise with over 100 locations. This particular Original Pancake House was located in Lincoln Park, almost hidden underneath a tall condo building, which made interior of the space a tad dark from lack of windows. “It reminds me of the old bomb shelter in me back garden,” Bunny said wistfully, “Remember Brandy? Gerald built it during the War.

We used to have dinner parties down there. It was so cozy.” The majority of the light came from some ornate stained glass panels overhead, which disguised obnoxiously yellow florescent light bulbs. The diner like impression was redeemed by the incredibly delicious smells wafting from the open air kitchen.
Bunny and Brandy were immediately whisked away to a table upon entrance, even though the restaurant seemed packed. Of course they expected to see pancakes on the menu, along with all the usual egg dishes, waffles, French toast, and the like. But upon looking closer, many of the items listed were made with surprisingly sophisticated ingredients. Brandy’s eyes nestled on the crepe selections, many of which boasted fruits flavored in sherry, brandy, and other such liquors. She also noticed fresh homemade quiche, which came in different flavors, depending on the day. Bunny was determined to enjoy the specialty of the house, a Dutch Apple Pancake which Our Ladies were informed would take 15 minutes to prepare.
To start off with, both of Our Ladies ordered a cup of hot chocolate to break the chill of the Chicago morning. Brandy got the Carmel Hot Chocolate, while Bunny’s sweet tooth got the better of her and forced her to order the Halloween Hot Chocolate. Both arrived in enormous mugs, piled high with whipped cream, and while Brandy’s was simply adorned with some caramel syrup, Bunny’s was dressed to the nines with sprinkles, candy corns, and a single pumpkin shaped Peep. Along with all of this coma inducing sugar, hiding under the mountain of whipped cream were honest to goodness marshmallows. “You do not see that in restaurants any more!” Brandy proclaimed between mouthfuls of the half melted confections, “Marshmallows in hot chocolate, my word!” 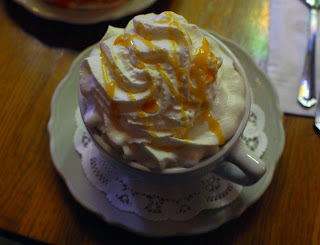 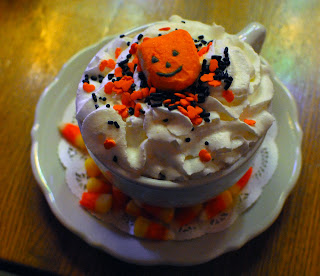 The main event began soon after the beverages were consumed. Brandy had decided on spinach and bacon quiche, as well as blueberry and sour cream crepes. Though initially impressed that a place such as this would offer fresh, hand made quiches, Brandy felt her dish to be a tad disappointing. “Sometimes a restaurant will tell you a dish is quiche when it’s really omelet

pie,” said Brandy, “This is omelet pie.” She reported the crust was nice and flakey, but the filling was overwhelmingly eggy, and the hash browns served with it were very interestingly spiced. The crepes, on the other hand, were exemplary. Simply plated with powered sugar and blueberry compote, the crepes were on the thick side, but tender. The filling was simple, but effective: lightly whipped sour cream and fresh blueberries. Brandy could not help but smack her lips at every bite.

Bunny’s Dutch apple pancake was not your typical pancake. Cooked in a cast iron skillet in the oven, it arrived fluffy and inflated, almost like a soufflé, with cinnamon apples on top. The cooking vessel had nicely crisped and caramelized the edges of the pancake. “It’s just like apple pie!” Bunny exclaimed with delight.

A filling and homey breakfast for between $10 and $15 a person (depending on exactly how filling you want your breakfast to be). What Original Pancake House lacks in atmosphere, it makes up for in taste. 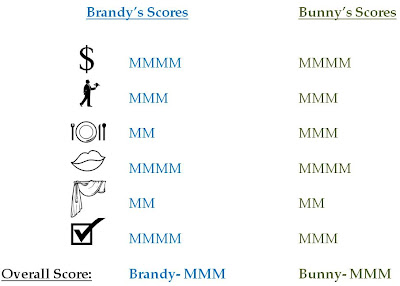 Posted by Bunny and Brandy at 5:39 PM