Orange or The Waiting is the Hardest Part

“I don’t know, I’ve heard mixed things,” said Bunny
“I think we should at least give them a try,” replied Brandy huffily, “We owe it to our readers.”
“If you insist,” Bunny relented, “ But you’re going to have to get there early to put us on the list. I hear the wait is atrocious and my sciatica waits for no man… or restaurant.”
“Fine. I’ve been meaning to re-read Winston Churchill’s autobiography anyway."

And so Brandy found her self at Orange in Lincoln Park, Chicago’s only restaurant chain devoted exclusively to brunch. She had arrived at 10:45 in order to get on Orange’s notoriously long Sunday Brunch waiting list. The hostess informed her it would be a wait between 30 and 45 minutes, so Brandy looked about for a place to spend the time. She was disappointed to find only a few wooden chairs stuffed into a corner, all fully occupied and, from the looks of the other patrons standing about, collecting a waiting list of their own. Brandy opted to stand in the small foyer area out of the way and became a reluctant door man for other diners both entering and exiting the establishment. Luckily, just as Bunny arrived, a table opened up (the total wait time only ended up as about 25 minutes). 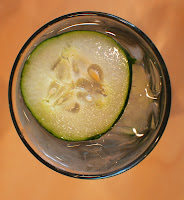 The interior of Orange was bright and cheerful, scattered with whimsical paintings, but very noisy. Brandy had to raise the level of her hearing aid by several notches just to hear Bunny from across the table. Their server (whose sunny disposition matched the décor perfectly) presented Our Ladies with water, dressed with cucumbers. Neither of Our Ladies cared for the cucumber water (Brandy was heard to say, “I don’t even want lemons in my water without a consultation”) but they did appreciate that it was something not ordinarily seen.

Our ladies began with some of Orange’s made to order juices: Bunny got a Vitamin C rich pineapple and orange blend, while Brandy reluctantly (there was a mimosa bar within her sight) selected apple and grape. Both were joyfully invigorating and obviously very fresh.

As an appetizer, Our Ladies enjoyed some of Orange’s signature Frushi (fruit + sushi). They were each presented with 2 pieces: a strawberry and cantaloupe “maki” and an orange and coconut rice "nigiri.” Though thoroughly delightful and delicious, Our Ladies did find the treats a tad difficult to eat with the chopsticks provided. (Truth be told, this so called appetizer didn't make it to the table until after the main courses had been presented, and even then only after Bunny pointed out it had yet to arrive.) 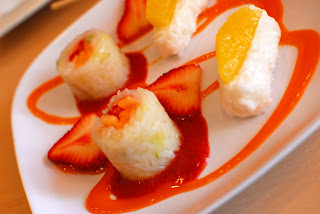 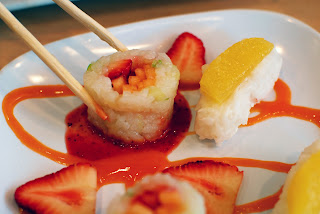 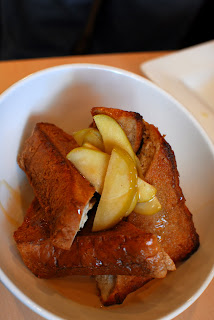 Brandy’s choice of entrée was the Chai tea infused French toast, which came stuffed with ricotta cheese and topped with caramelized apples. The first few bites, she reported, were delectable, but with no side dishes to refresh the palete, it soon became a little monotonous to eat.

Bunny (who had attempted to order a Reuben sandwich, but was told they were not available) opted for the Green Eggs and Ham: scrambled eggs mixed with basil pesto, diced tomatoes, and ham cubes accompanied by house potatoes and toast. Bunny’s dislike of scrambled eggs was over ridden by this enticing meal, which she finally had to 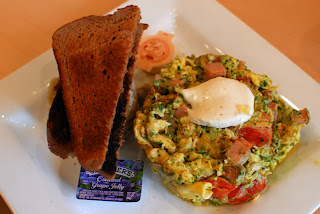 admit was one of the best egg dishes she’d ever had. She especially appreciated that the toast was incorporated into the presentation of the dish and not relegated to one corner of the plate like a

naughty child, as so many other places often choose to do.

Orange proved to be a pleasant surprise for Our Ladies, who had expected to be let down by the buildup. With juice, Frushi, main course, and tip the total bill per Lady still came out to less than $20. Their only advice; find a willing party with a high boredom tolerance to do the waiting. Brandy would like it pointed out that she can be hired for this work for the price of a trip to the mimosa bar. 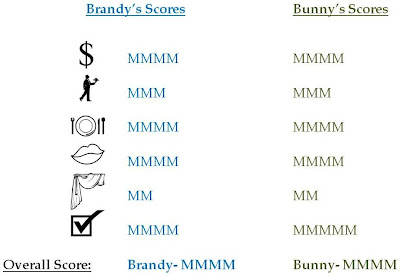