Nightwood or The Dream Donut 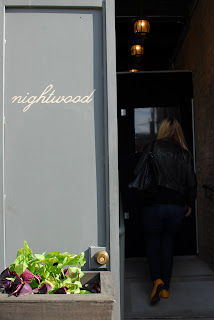 After all the excitement of the blog launch last week, Our Ladies needed a destination fitting of their new-found celebrity status. Eventually, they settled on Nightwood, a charmingly modern, yet rustic bistro in the heart of the Pilsen neighborhood. They were joined by a delightful couple from the Bayou, Biscuit and Birdie Brown, friends of Bunny and Brandy’s since time immorial.

The Quartet were seated immediately upon arrival. They were taken to the covered porch area, which boasted a fireplace and surprisingly comfortable wire chairs. Their table was even ornamented for their arrival with festive corn cobs and a pumpkin. Brandy thought this special treatment was due to their iconic reputation until Bunny pointed out that all the tables were bedecked in such a way.

Hot beverages were roundly ordered: a Chai for Birdie, a Cappuccino for Biscuit, and a spiced cider for Brandy, which she was delighted to hear, could be “spirited” for an extra $5.
Our Ladies and their invited guests perused the handwritten menus with great interest, until all 8 of their eyes zeroed in on the top right hand corner. Fresh…handmade…donuts. There were three options that day: a Seasonal Cider Soaked Donut, a pseudo S’mores Donut with smoked chocolate glaze, and Nightwood’s signature Bacon Butterscotch Donut. Each pastry was presented with 3 cinnamon sugar donut holes and all of the above were devoured in mere seconds; the Butterscotch Bacon being the standout because of its sweet/salty/smokey combo. (Our Ladies would be remissed if I didn't mention that the Browns had to be discouraged from licking their plates. “We do things differently down South!” was Birdie’s impassioned reply.)

For the main event, Our Party ordered thusly: Biscuit favored the Baked Ricotta with Pumpkin Seed Pesto while Birdie set his eye upon the Pastrami and Roasted Onion Frittata. The baked cheese dish came daintily plated with crostini, a poached egg, a honeyed apple, and a small olive salad. Though overwhelming to the senses, Biscuit reported the dish to be fluffy and nice, but not very flavorful. Birdie’s Fritatta was subtle as well, but the chopped chicken liver croutons that accompanied it lent a little bit of boldness. 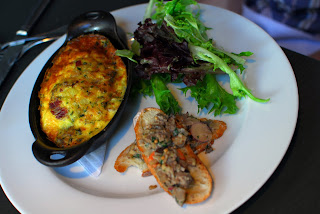 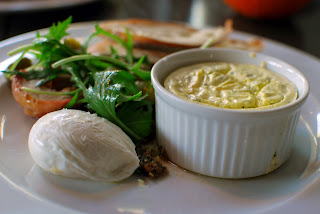 As for Our Ladies, Bunny settled on the Butternut Squash and Duck Confit Quiche and Brandy the Mushroom and Onion Stuffed French Toast with Gruyere Cheese. According to Bunny, the quiche was rather good, not too eggy (“That’s a Quiche contradiction!” Brandy bellowed) with a delightfully buttery crust. Brandy’s French Toast tasted of the fire, she said, adding that the general effect of the dish was that of a kissing cousin to a bowl of French Onion Soup. 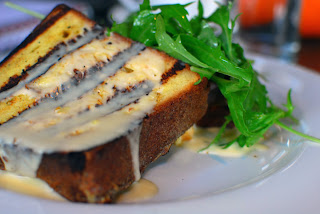 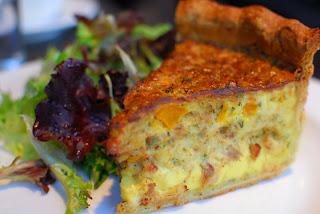 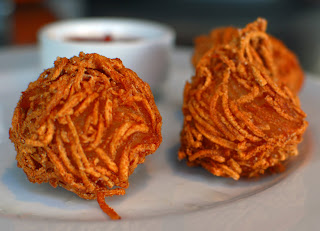 salty goodness to the end of the meal for the entire table.
The total came to around $25 a person after tip, so not the cheapest fare on the block, but Our Ladies both agreed Nightwood is the place to feel young and hip by enjoying the old fashioned and serene.
The Short and Sweet Review: 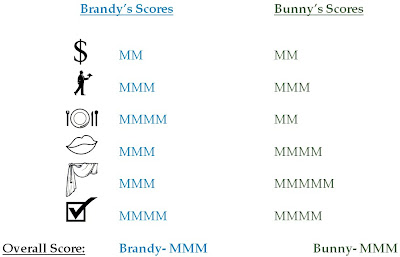