Let it be known that I am about the only person in Chicago who does not like summer. Maybe it's because I grew up in Arizona, where desiring to be outside between the months of June and August was akin to having a death wish. Maybe it's because I am...ahem... a tad over weight, and everyone knows fat people don't do well in sweaty situations. Whatever the case may be, I usually spend the majority of the warmer months inside with the AC blasting.

While in my heat induced exile, I usually start experimenting with recipes and products that can give me a little energy boost to get me through the long humid days. One of my new favorite things is from a company called RIND, which have brought out some rather interesting dried fruit snacks. These snacks (which come in California Kiwi, Tropical, and Orchard blends) are large slices of dried fruits that have their rinds intact. Now, admittedly, their appearance can be a little off putting, mostly because they look a bit more like potpourri then something edible. But these snacks have no added sugar, no sulfates, and no dyes and are GMO free, gluten free, and vegan. All of the fruits (except for the pineapple in the Tropical blend) have been prepared with their skins in tact, giving every piece more fiber and nutritional value then traditional dried fruits. I'm not normally a fan of fresh kiwi, so I was skeptical about the dried version, especially because of the intact skin, but the kiwis ended up being my favorite fruit of the bunch. They were perfectly sweet, tart, chewy, and crunchy and I nearly ate the entire bag in one sitting! The Tropical blend combines the kiwi with pineapple and bittersweet orange, while the Orchard blend is a combination of apples, peaches, and persimmons. I am currently keeping bags of these snacks behind my desk for a quick burst of natural fruit energy and vitamins wherever the mid day lull hits. If you want to give RIND a try, you can pick them up on Amazon! 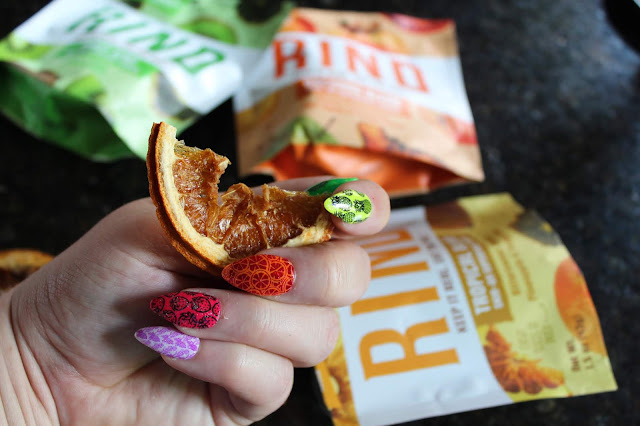 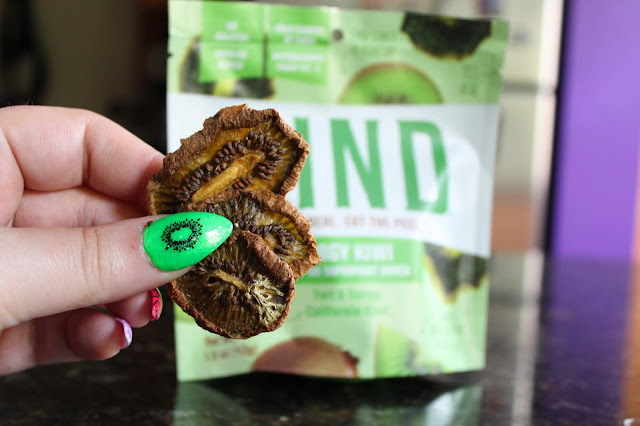 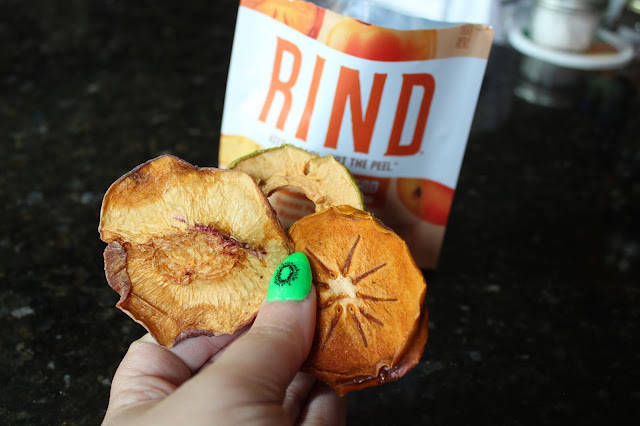 One of my other recently discovered favorites is Louis Raison ciders. These classic French ciders (or cidres if you want to be fancy) have just launched in Illinois with three varieties: Original Crisp, Organic Dry, and Rouge Délice. Two of my good friends are self professed cider experts, so they are constantly introducing me to new varieties and flavors from all over the world. This being my chance to finally introduce them to something new, I invited them over one night to try the Louis Raison ciders and get their expert opinions. While we all enjoyed all three of them, they both lent towards the Original Crisp as their favorite because of it's bright flavor and caramel-like finish. I have a slightly sweeter palate, so I really liked the Rouge Délice, which was a blush cider with a very clean and slightly floral flavor. The Organic Dry was very light and refreshing with a flavor almost like baked apples or apple pie. I decided to use it to cook up some chicken apple sausages I had in the fridge, and it gave them such a delicious depth! Since this was the least sweet cider, it made for a perfect boiling liquid and also made a great glaze once reduced. I had some pickled red cabbage in the fridge, as well as an onion and garlic jam, which I thought would be perfect as toppings. I also mixed up a mustard cream (whole grain mustard, powdered yellow mustard, sour cream, and a little bit of apple butter). I may never go back to beer brats. These were sweet and savory perfection! 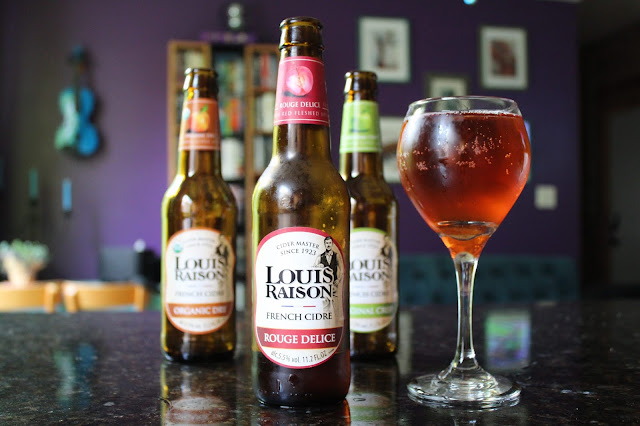 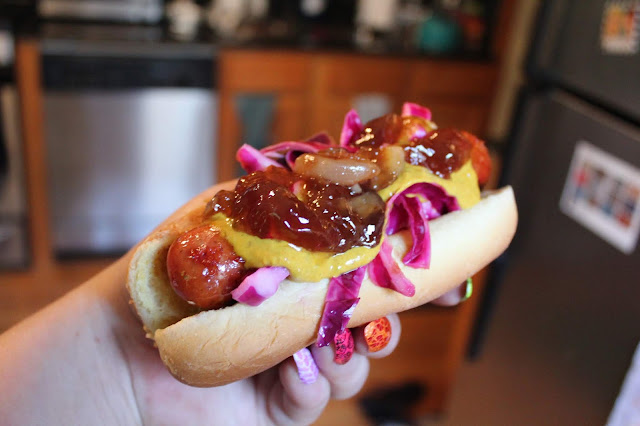 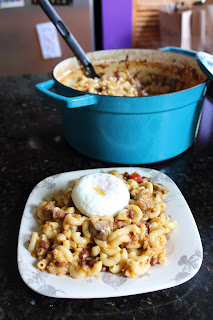 The one thing I do like about summer is going to farmer's markets. I always get inspired by all the fresh produce, meats, and eggs. My usual farmer's market takes place on Sunday mornings, which makes it rather convenient for me to go there to find something for breakfast. A week ago, I ended up with some cremini mushrooms, beautiful heirloom cherry tomatoes, thick cut bacon, and pork breakfast sausage. It wan't until I got home that I realized I had accidentally bought all the fixings for a traditional English breakfast! But me being me, I couldn't simply just fry everything up and be done with it. Oh no! I had also bought two small wedges of very strong cheddars, which gave me the idea to combine all of these delicious ingredients into a massive pot of breakfast mac and cheese.

Since I was going to be including the pork sausage and the bacon, I didn't want to make a cheese sauce with a lot of butter or milk, because the meat fats would probably cause them to separate and become too greasy. Instead, I decided to use some Muuna Cottage Cheese to bind everything together without adding too much additional fat or liquid. I've been a big fan of Muuna for a while now, especially their individually sized cups which come in a ton of delicious flavors. I even make little cheesecakes with them sometimes!

I started my mac and cheese by cutting up the bacon and sausage into bite sized pieces and browning them in a dutch oven. I then used the fat from the meats to blister the tomatoes and saute the mushrooms. I cooked up some elbow macaroni, then added them to the pot, added the meats back in, then put in all of the cheddar (which I had grated) and two large containers of plain Muuna, then mixed everything together. I baked it at 400 for about 45 minutes, then I added a can of drained baked beans to the top (it's not an English breakfast without baked beans) and cooked the whole thing for another 15 minutes. I served each portion topped with a perfectly poached egg. And voila! English Breakfast Mac and Cheese! 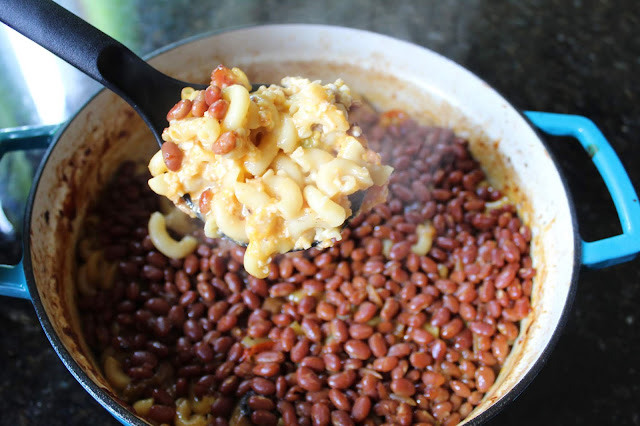 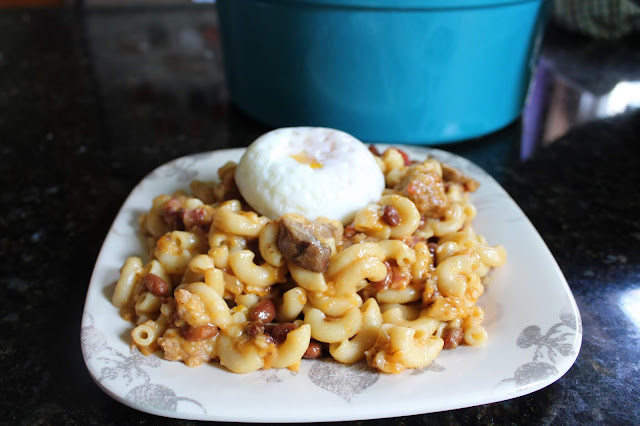 I received some of the products mentioned free of charge from the mentioned companies. All opinions stated are my own.
Posted by Bunny and Brandy at 1:31 PM