Brunch at The Craftsman by Two Brothers

I've been watching with great interest over the last few years as Two Brothers Brewing Company grew from a Chicagoland based microbrewery into a nation conquering empire, with not only an army of uniquely crafted beers under their belts, but an amazing coffee line, an artisan spirit collection, and several fine restaurants. I'd been to their flagship restaurant, The Roundhouse, once before when some friends and I attended the Two Brother's Summer Fest, but we didn't really get to sit down and enjoy a proper meal that day (though both the carnival-style food being cooked outside and the buffet offerings inside the complex were amazing). That's why when I was offered the chance to stop into The Craftsman, Two Brother's locally focused craft pub in Naperville,  I jumped at the opportunity, despite the 90 minute drive. 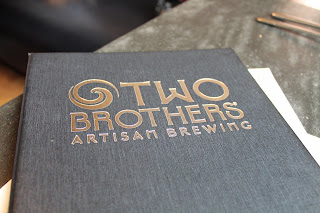 I managed to rope a friend with an actual motor vehicle into driving us out there one Saturday morning. I hadn't been to Naperville in about 10 years, so I was really impressed to see how much change had taken place around the river walk area, with lots of sweet little independent shops and restaurants instead of the chain stores and fast food joints I remembered. The Craftsman itself cuts an imposing figure on the quaint avenue; it's multilevel facade housing not only the restaurant, but also a buzzing coffee shop and a cocktail bar. We were taken up to the second floor of the building and given a cozy seat by the window, where we happily watched a giant group of dogs causing adorable havoc on the patio below as their owners brunched.

I was a little perplexed that the variety of coffee cocktails we saw advertised downstairs in the cafe were not also being offered upstairs, as that seemed to be to be a perfect opportunity for Two Brothers to showcase two of their signature product lines. Instead, we ordered a couple of smoothies, both of which were very fresh tasting and not overly sweet. 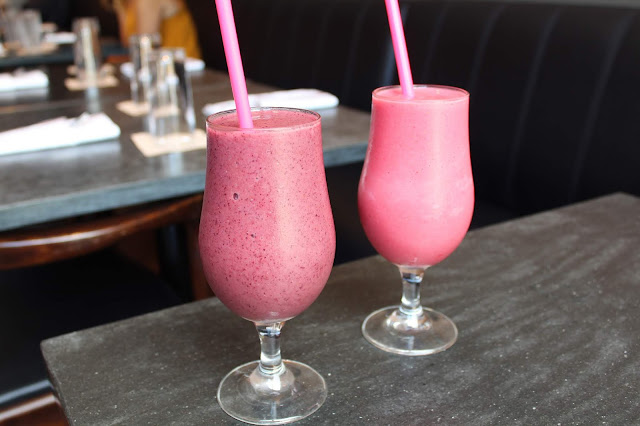 Speaking of sweets, we decided to kick things off with a couple of their more sugary options: The French Toast with bananas and coffee rum sauce and the Bacon Waffle with apricot jam. The French Toast was pretty good, though the highlight was definitely the coffee rum sauce (I'm assuming it was made with Two Brother's coffee), which we nearly licked off the plate. I do wish they had brûléed the bananas a little, or maybe cooked them in that awesome sauce, just to dress the dish up a little. The waffle was really fun. Not only did it have bits of bacon mixed into the batter, it came topped with more candied bacon as well as apricot jam. It was light and crisp with a very subtle sweetness. The bacon, though, was some standout stuff. This is going to sound really stupid, but the bacon had a heavy pork flavor to it, rather than a more typically smokey flavor. 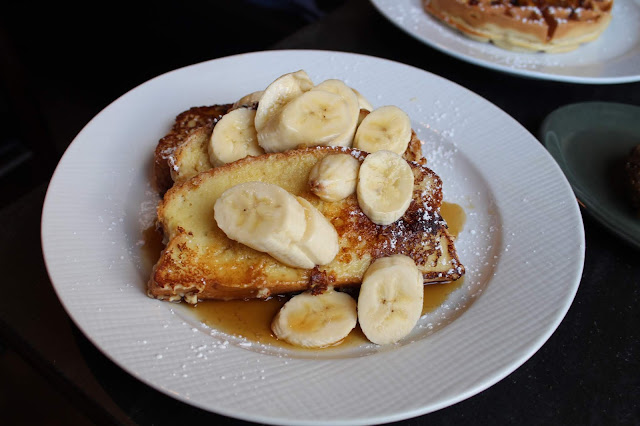 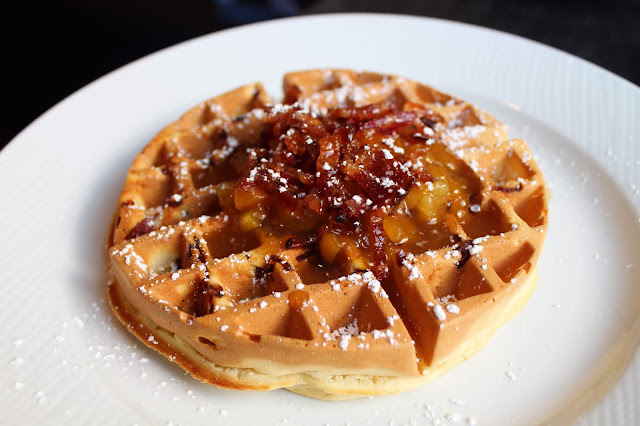 Moving onto savory dishes, we picked three to share (mostly because I couldn't decide between two of them). Firstly was the Cuban Benedict, which came with shredded pork, Swiss cheese, mustard hollandaise, and ham on an English muffin. The pork was a nice touch and very tender, so I wasn't really sure if the ham was necessary.  The mustard hollandaise, though, was amazing and turned everything it touched into gold. 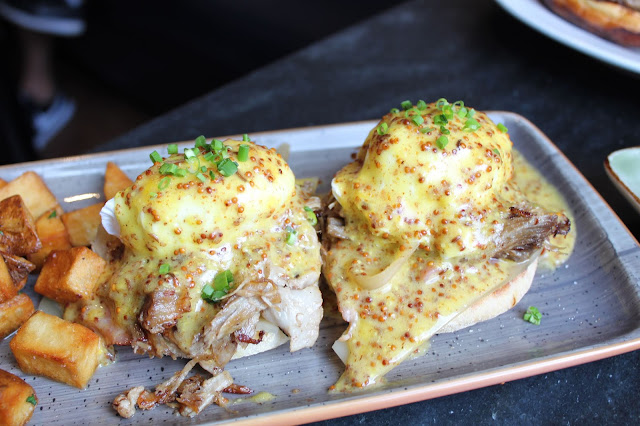 Next was the New England Lobster Roll. I'm not normally a huge lobster fan, but a rash of lobster rolls being posted to Instagram had put me in the mood for this summer time favorite. There was a decent amount of lobster meat on the roll, but it had been cut with a bit too much celery for my liking. The bun had actually been toasted and buttered in proper New England style, a step some restaurants sometimes forget. 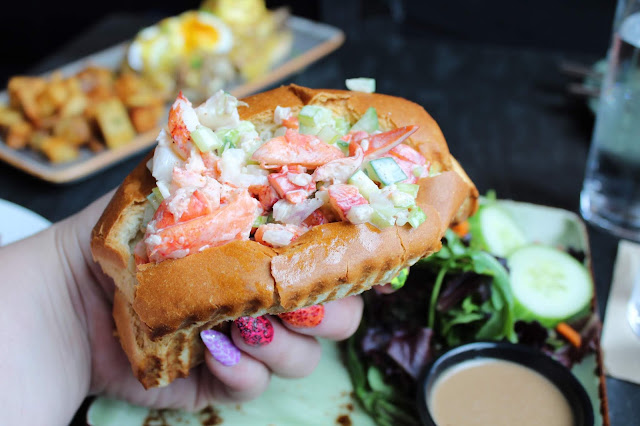 Lastly was the Butcher's Burger, topped with bacon, tomato, lettuce, onion, and cheddar. This was the perfect kind of pub burger; simple, well put together, well prepared, and recognizable. As an admitted big fan of overly complicated gastro pub burgers, it was actually kind of refreshing to see just as much care and thought put into this classic burger as others put into more outlandish fare. 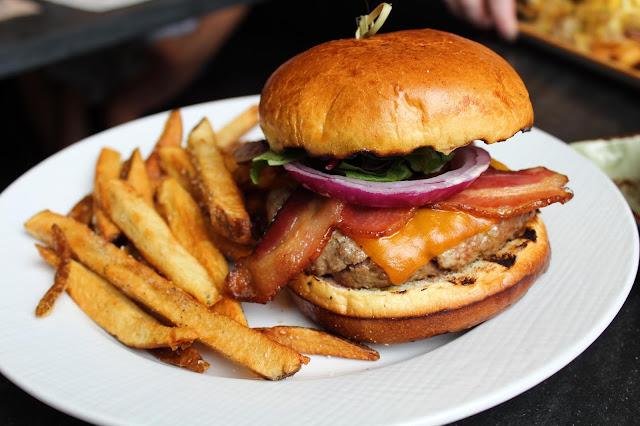 All in all, we spent a very pleasant afternoon at The Craftsman. Our server was very chipper and sweet despite being saddled with waiting on both the main dining room and the patio. The food was approachable and didn't take a whole lot of crazy twists and turns in an attempt to appeal to passing gourmands. But I do wish Two Brothers had put a bit more of themselves into the menu. Beer battered something would have been nice. Or the aforementioned coffee infused cocktails. Maybe even a beer mimosa, just to remind people of the restaurant's parent company. But I get that the goal may have been to carve out a niche in the dining scene that was more independent. I thought that the modern industrial decor made for a very relaxing atmosphere, and all the prices were extremely reasonable, especially when taking into consideration the quality of the ingredients.  Would I drive 90 minutes to go there for brunch again? Maybe not every weekend. But if I was in the area, it would definitely be on my list of stops to make.

I was invited to dine at this restaurant free of charge in exchange for an honest review of my experience.
Posted by Bunny and Brandy at 2:04 PM