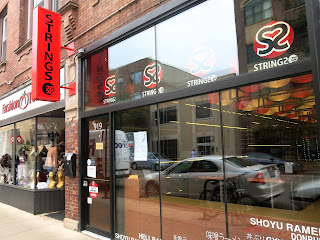 Record heat waves are nothing to Brandy now that she has set her mind to fall mode. "I don't care what the thermometer says. It is September, for goodness sake, and I'm ready for hot beverages and hot soups," said Brandy, "But I refuse to eat or drink anything pumpkin flavored until October. People tasting pumpkin before October are morally bankrupt." On the receiving end of her rant about the climbing temperatures verses the desire for fall foods was her good friend Brocco. "You know, in Japan, there's this philosophy that if it's hot outside, you should eat hots foods because it will cause your body to try and cool itself off even more," he pointed out as he wiped a bead of sweat from his forehead, "So you can still have your hot drinks and such even though its warm, and they might even help you feel better!" "That does it then," Brandy proclaimed, "You and I are going to go have something hot for brunch. Something that warms the body and the soul." 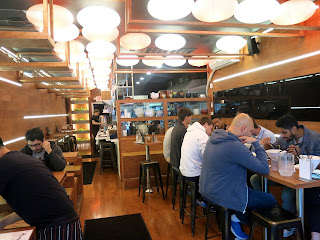 They headed to the newly opened Strings in Lakeview. This little outpost near the Belmont train station boasted the same lineup of richly flavored broths and handmade noodles as the original Chinatown restaurant, but with plenty of exclusive new additions to the menu. The decor really did evoke the feeling of a ramen shop in Tokyo, with bright and unique lighting all around, high and minimalistic tables, and lanterns hanging from the industrial inspired ceiling.

Brocco and Brandy started off with some steamed Chicken Gyoza and a bowl of Yuzu Miso Salmon Sunomono. The gyoza were just the thing to peek one's appetite for the meal to come. Their interior was wonderfully juicy and tender with just a hint of spice, while the outer skin remained bouncy and supple. The Sunumono was actually quite refreshing, being served over a bed of shaved cucumber and other vegetables and dressed with sweet vinegar. Brocco really loved the succulent fish, which tasted as fresh as though it had been caught that day. Brandy enjoyed the softly sweet flavor from the yuzu miso and thought that the tender chunks of fish were going to make for perfect palate cleansers in between sip of their ramen, which hit the table almost immediately after the starters did. 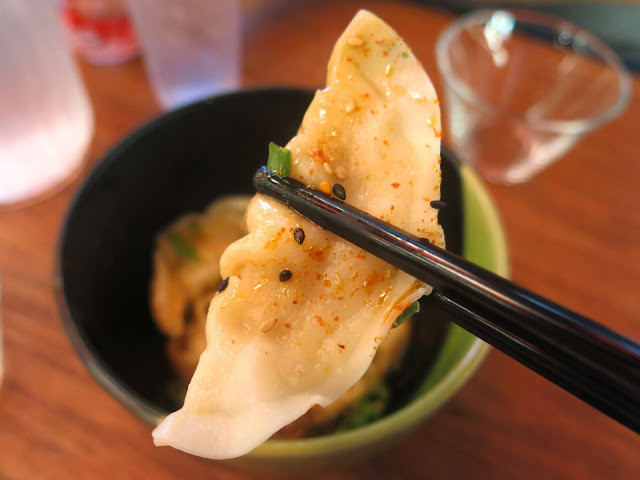 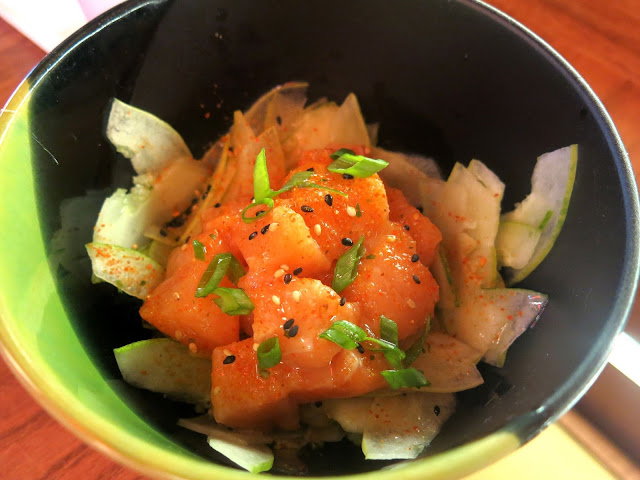 Brocoo had gone with the Kuro Buta Tonkotsu Ramen, which matched a creamy pork bone broth with sesame seeds, wood ear mushrooms, green onions, a soy sauce marinated egg, and thick slices of fatty pork belly. Diving straight in with his chop sticks, Brocco discovered the tangle of noodles lying just under the surface and pulled up a mouthful-sized portion, then proceeded to slurp them up without abandon. "Young man!" Brandy scolded him. "No, it's ok!" he protested, "You're supposed to slurp your noodles. It shows that you're enjoying them and it cools them off enough to eat straight away. You don't want your noodles to sit too long in the broth, or the texture won't be right." As these noodles had been made fresh, they had an exceptionally wonderful texture with just enough chew to them. Brocco found that the broth in his ramen was actually a bit lighter than he had expected it to be, but it was still deeply flavorful and well seasoned. It wasn't long before he was lifting the bowl to his mouth so that he could slurp every last bit. 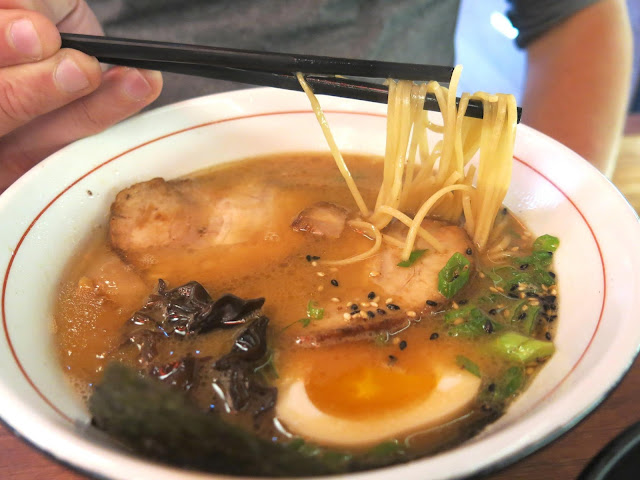 Brandy went with the Premium Miso Ramen, which came adorned with corn, spicy ground pork, clams, bean sprouts, red onions, lots of garlic, and a couple slices of filet mignon. "I've never seen ramen served with steak before!" Brocco exclaimed in surprise. Brandy was amazed by just how tender the meat was, and even though it was surrounded by a lot of very strong flavors, its true beefiness still shone through. The miso broth was soft on the tongue and not too salty, but Brandy thought it tasted particularly good with the addition of the fresh garlic. After her first bite of golden, chewy noodles, she found it difficult to stop eating and very soon, her chop sticks were coming up out of the broth empty. Luckily, Strings offers Kae Dama, which is an extra order of noodles, meant to be used with one's broth once the original noodles had been finished off, and Brandy happily took advantage of the service in order to sop up every last bit of her bowl. 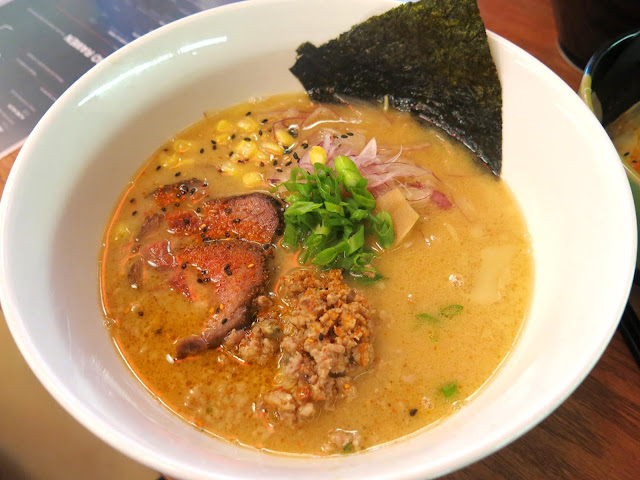 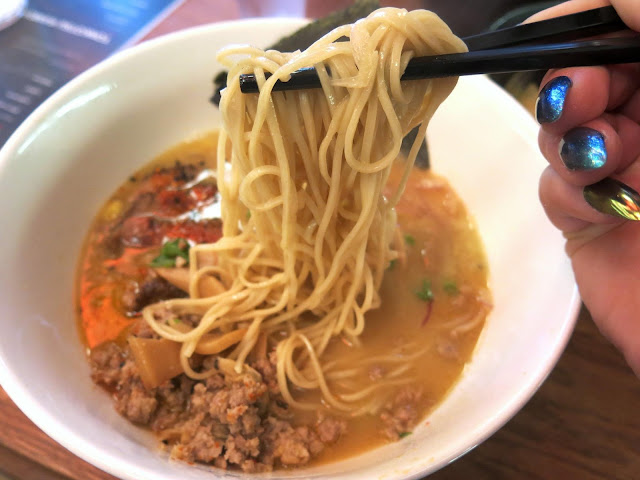 Finally, the pair finished off their meal with a couple sweet bites: a Tiramisu cup and a little piece of Sasa Dango. The Tiramisu was amazingly creamy and smooth with a good hit of coffee flavor. "Not what I would expect in a ramen restaurant, but it's rather tasty!" said Brandy. "Funnily enough, tiramisu is a pretty popular dessert in Japan," said Brocco. The Sasa dango was a lovely dumpling, made from sweet rice flour with a sweetened red bean paste center, all wrapped up in bamboo leaf and steamed. Both Brandy and Brocco very much enjoyed the chewy little bite, which made for the perfect end to their meal. 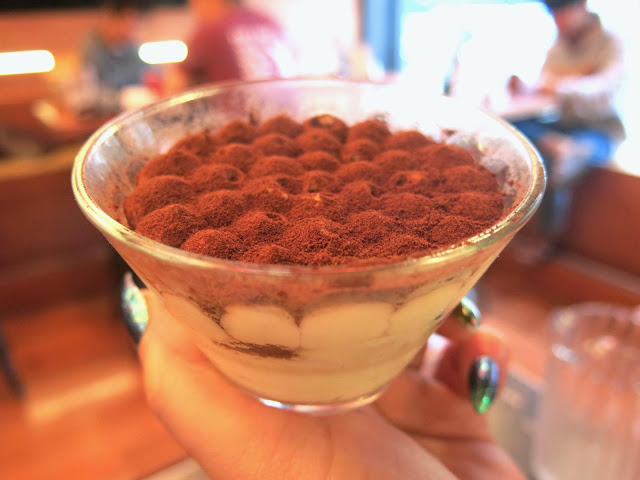 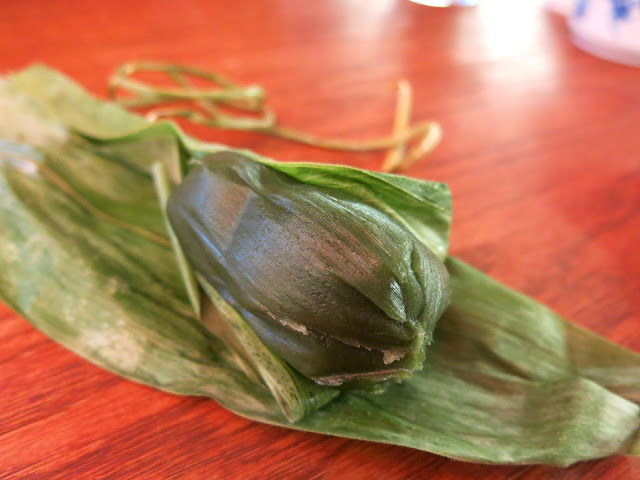 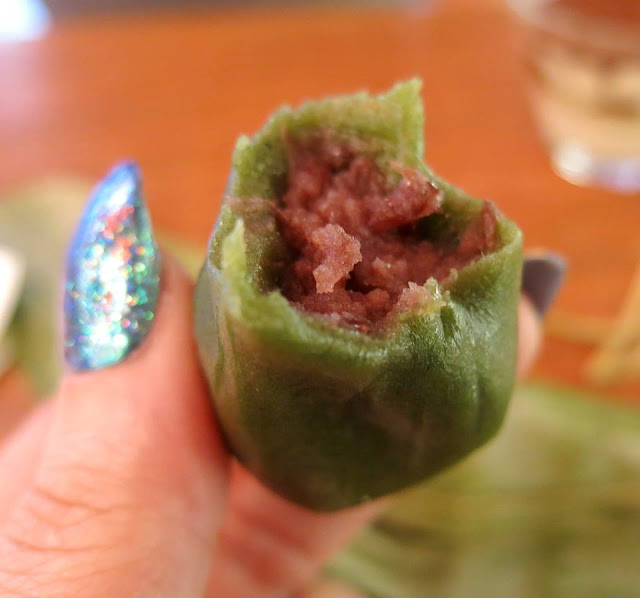 Brandy really appreciated String's adherence to Japanese tradition while making efforts to modernize and customize their selections. The food came to the tables incredibly fast, which is also a fairly common practice in traditional ramen houses, but there still had been an effort put in to present the dishes in a very pleasing way. The prices were also very reasonable considering the quality and time put into the food (only a single item on the menu topped $20). Stepping back out into the sweltering heat, Brocco turned to Brandy and asked, "Well? Did it work? Do you feel any cooler?" "No," said Brandy, "We better go back inside and keep eating ramen until it stops feeling like the inside of an oven out here." 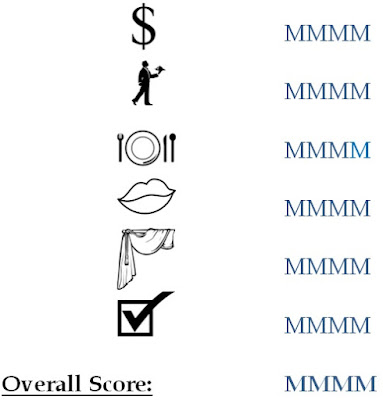 Posted by Bunny and Brandy at 1:47 PM