Rhyme or Reason or Battle Royale (With Cheese) 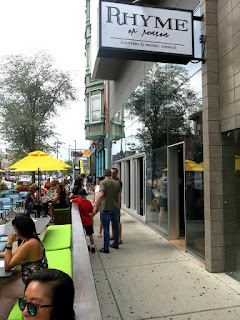 It had been a long time since Brandy last saw some of her best friends in the world, Bambi Buttercup and her husband Bear, so she was quite delighted when they let her know they were coming into town. "And we've got a little surprise for you!" Bambi twittered in her signature sing song voice. Now, one thing to know about Brandy is that she is not good with surprises. When told a secret is being kept from her, Brandy goes into full Baker Street mode and analyzes everything she has at her disposal in order to solve the mystery. Christmas presents are impossible to hide from her. Trying to plan a surprise party? Forget it. Once, she even predicted a marriage proposal before the groom to be had even bought the rings.

So imagine Brandy's surprise when she met her friends in front of her new home and discovered that there was not two of them, but three. "Surprise!" Bambi shouted, "Meet our son, Bambino!" Brandy's eyes grew wide as she was handed a smiling mass of flailing limbs and golden hair. "We were going to tell you, but Bambi thought it would be funnier not to," said Bear as he hauled their luggage out of the town car. "But... but... I thought you were on tour with your one woman show!" Brandy exclaimed. "Oh, I have been! But he doesn't mind. He just goes to sleep in my costume trunk while I'm on stage," Bambi replied. Bambino gurgled and giggled. "Having a baby hasn't affected your lives at all?" Brandy asked in wonder. "Well, we don't get to eat out as much," said Bear. "And that's where you come in!" Bambi sang, "We thought that since you've got the scoop on all the deliciousness in Chicago, you might know a place we could go all together to enjoy a meal out on the town like we used to!" 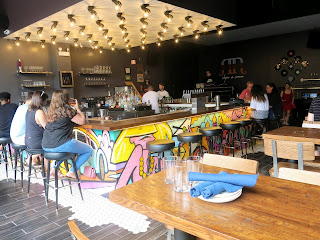 An idea occurred to Brandy in that moment. Just as Bambino had been created by Bambi and Bear in perfect collaboration, another collaboration had been on Brandy's mind as of late; that of Sherrie Tan, baker extraordinaire at Sweet Mandy B's, and the chefs at Rhyme or Reason, the recently opened disco themed haven in the heart of Bucktown. Rhyme or Reason had tapped Sherrie to partner with them in creating two fabulous brunch dishes to be offered as specials throughout the month of September, one sweet and one savory, and Brandy had been looking for any excuse to try them. Now she had one. 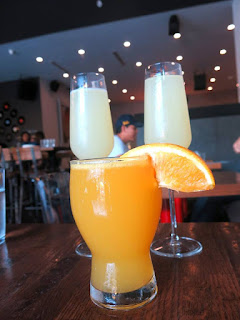 Showing her friends into the sun filled venue, Brandy was delighted to find that even a hip and groovy restaurant like Rhyme or Reason was prepared to help out with baby Bambino, providing him a high chair, a special water cup or his own, and a plate of avocado so that he could munch right along with his parents. Once settled in, the group was able to enjoy the beautiful pops of bright colors all around the room, which stood out against the base of cool grey tones. The retro vibe was certainly there (present most definitely in the music), but it wasn't so intrusive so as to make the place seem like a corny theme restaurant.

The group began with a round of drinks. Bambi went for the house mimosa, made with white grapefruit juice and Segura Vidas Cava, which gave the drink a pleasant bitterness. Bear went with the Bro-Mosa, a more manly version of the drink, made with Triple Sec, vodka, and a citrus scented pale ale along with a splash of orange juice, creating a rather floral flavor along with the zingy citrus. Brandy picked the Let's Get It On, a fruity and tropical delight with mango flavored vodka, pineapple, passion fruit, coconut, and lime juice and a bit of reisling for an extra touch of fruitiness.

To start them off, the group toasted each other with a plate of Deviled Eggs. Bear and Brandy enjoyed the regular version, which was adorned with a dollop of espresso scented bacon jam. The eggs had a nice mustardy flavor, but the hint of espresso really made them quite unique. Bambi and Bambino sampled their eggs without the bacon jam and still found them to be quite tasty and baring the unique espresso flavor. 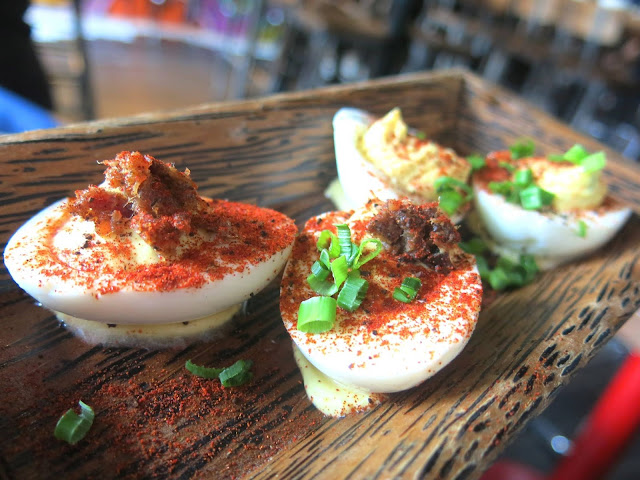 Bear picked the Chilaquiles as his entree, having never experienced the dish before. He very much enjoyed the mix of tender pulled chicken meat, sweet corn, black beans, and the bright bits of salsa throughout the dish. He was very impressed to see that the house made chips at the base remained crispy under the weight of all the toppings and the perfect amount of heat in the spice mix meant that every bite kept his attention. 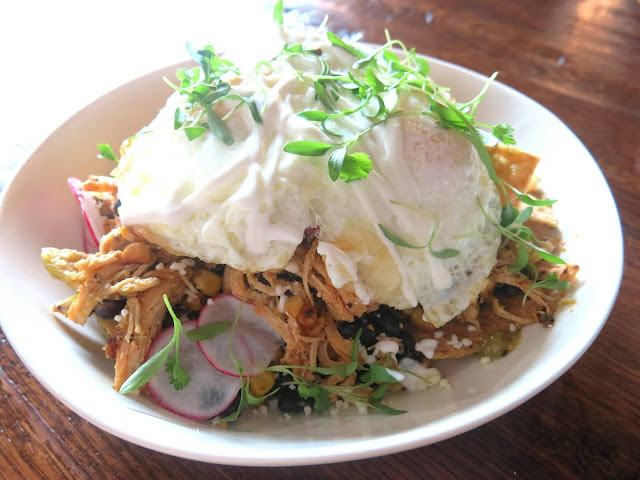 Bambi went with the Croque Ma-DAYUM, which just happened to be the previous month's Hanover Special plate. This version of the classic French breakfast dish was absolutely succulent, between the soft eggy bread, the thinly sliced ham, and the deeply flavorful beschamel sauce. "I can imagine that if I were indeed hung over, this would be simply perfect for soaking up all those icky toxins!" she proclaimed. 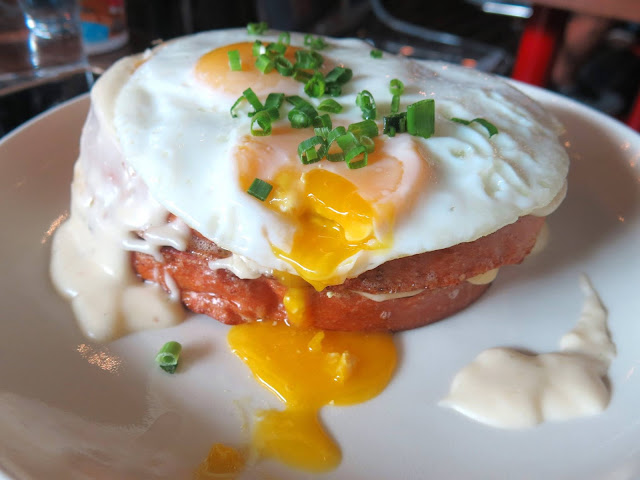 Brandy, of course, went for the current Hangover Special, the Mac Daddy. This monument to gastronomy was comprised of macaroni and cheese tossed with roasted corn, blistered cherry tomatoes, and hunks of bacon lardon, then topped with a panko breaded chicken breast and two sunny side up eggs. After one bite, Brandy looked up at her companions and proclaimed, "None of you are getting any of this." Between the sweetness of the veggies, the richness of the cheese sauce and bacon, and the crunch of the chicken, Brandy could not imagine a more perfect mix of textures and flavors. Luckily for her, everyone else was also jealously guarding their entrees. "They don't know what they're missing," she silently giggled to herself as she shoveled more pasta into her mouth. 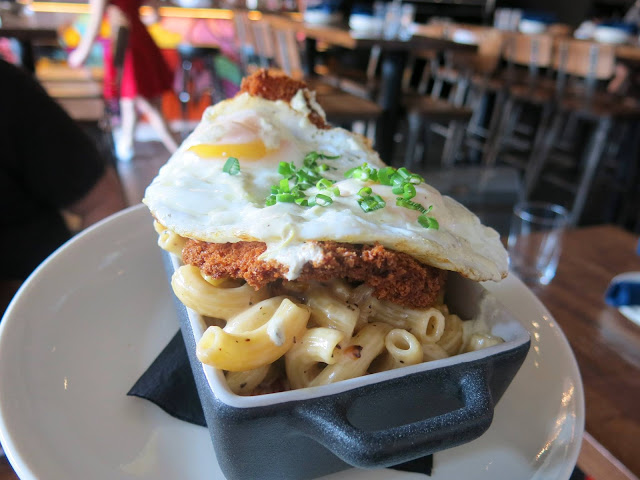 Finally, they decided to share the second special of the month, the Foxy Mama, as dessert. This decadent treat consisted of a whipped cheese cake mousse between two churro buns covered in dulce de leche and accompanied by slices of bruleed bananas. As each of them sunk their fork into this masterpiece and brought it to their mouths, their eyes collectively rolled back in their heads in sheer ecstasy. The problem arose when all of them went back for a second bite and found themselves fencing with their cutlery to get as much of the delectable treat as they could. "We're going to need a few more of these if we want to make it out of this brunch alive," said Brandy as she dead locked gazes with her dining companions. Even baby Bambino reached a chubby hand out for a slice of banana. 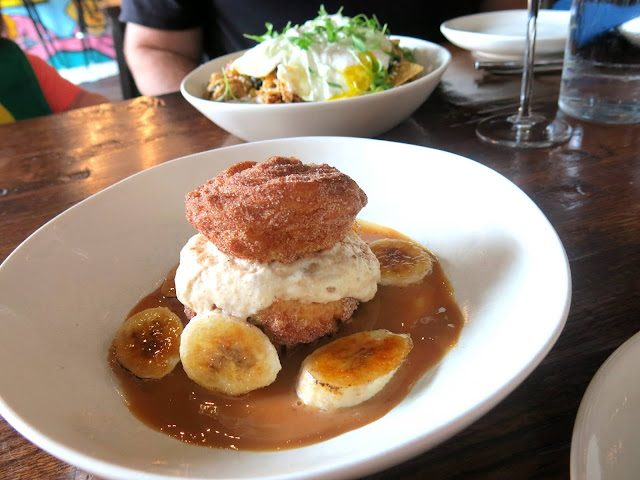 Once every last morsel of the Foxy Mama had disappeared from their table, the group were able to finally relax. The cheerful and accommodating service had made the meal all the more enjoyable, even with baby Bambino vocalizing his displeasure every time the group were eating without him, and the prices were so reasonable that Bear actually roared with laughter when the check arrived. "Oh this was just lovely," said Bambi, bouncing Bambino on her knee as he tossed a piece of avocado to the ground. "Yes, well, next time you decide to surprise me like that, if you could do it when we're already at brunch, that would be wonderful," said Brandy, "That way, I'll at least have a drink in front of me already!"

The writers of this blog were given a portion of their meal free of charge in exchange for an honest review. 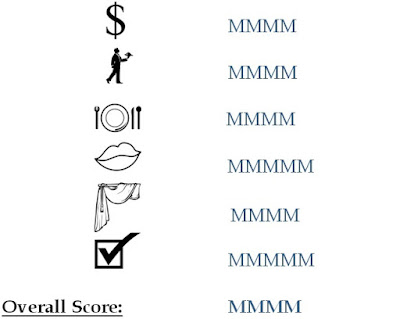 Posted by Bunny and Brandy at 1:23 PM