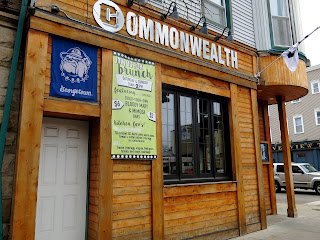 Brandy has always held a rather idealistic torch for the type of neighborhood joint where the bartenders have one's favorite drink ready before one has even had a chance to sit down. "I know the traditional old corner pub is all but a romantic fantasy in this day and age," she says, "But wouldn't it be lovely to have those kinds of places again? The ones where regulars have their own seats and whole neighborhoods gather together to watch a big game or toast the season? Ah, those were the days." "Did those days ever really exist though?" asked her friend Bernais Bamboo, who had been listening to Brandy ramble for a good five minutes. "Yes indeed they did!" Brandy chastised her, "Why I remember a time when you were thought to be the village weirdo if you weren't down the pub every night at six o'clock. The pub was where everything in the community got done! Now with all the texting and social anxiety and alcoholism about, it seems like those days are gone for good." "But there's still quite a few good bars around. And they have much better food than they used to, let me tell you!" To this, Brandy had to concede the argument, and in doing so, she allowed Bernais to pick a brunch destination to further prove her point. 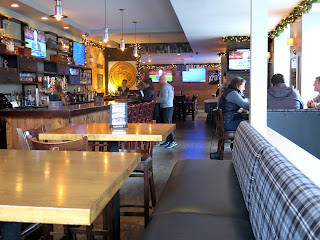 In order to give Brandy the kind of cozy neighborhood pub experience she was craving, Bernais took her to Commonwealth Tavern, a friendly little spot in the heart of Roscoe Village. The interior layout was open and spread out, making for a very comfortable vibe that didn't put patrons right on top of each other. A few bar games here and a few televisions there made the place instantly feel like it wanted its patrons to have a good long visit. 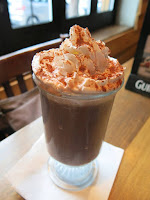 Though the Make Your Own Bloody Mary and Mimosa Bar looked promising with lots of juices, mixes, and fixings, Brandy opted for a cup of Uncommon Hot Chocolate, which had been spiked with a cinnamon whiskey. The warm, indulgent drink was just the thing for a blustery and grey morning and Brandy took great delight in sipping it all throughout the meal. Bernais, who was expecting her first child, politely asked the bartender to mix her up a fruity mock-tail, and she was delighted to be handed a muddled mint and strawberry beverage. "That's how you can tell a bartender knows their stuff," said Brandy, "Anyone who can create something this delicious on the fly without using any alcohol gets a gold star in my book."

They then started off their meal with a lighter option, the Mixed Green Salad, which had much more exciting ingredients than its name implied. The bed of peppery greens came accompanied by sweet roasted beets, crunchy chunks of jicama, a sprinkling of fried pecans, and a ginger lime dressing, to which Brandy and Bernais added some grilled chicken. The serving staff sweetly split the salad in two so that both ladies could enjoy their fair share, which they very much appreciated. It certainly had a nice mix of textures between the nuts and various veggies, and while it had a fresh flavor, the salad was actually quite hearty and filling. "Seems like the kind of thing that would taste even better when eaten on a patio in the sunshine," Bernais commented. 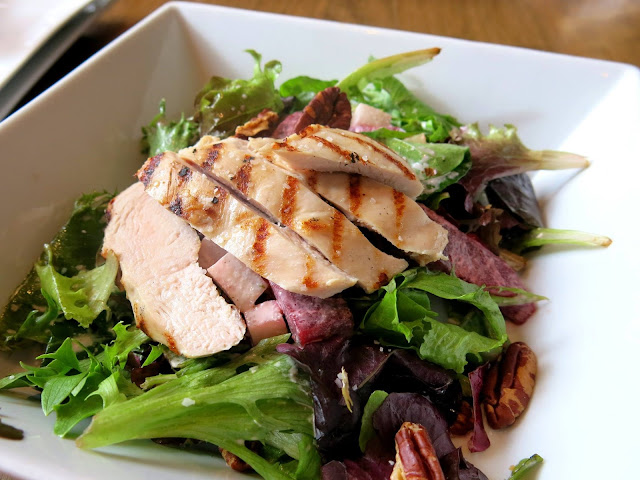 Next, they moved on to a slightly less healthy option; a plate of the signature Nachos. This impressive pile of house made chips came slathered in a beer cheese sauce, salsa verde, crema, and was augmented with braised pork and a host of pickled vegetables. Brandy was mightily impressed with the chips themselves, which had an almost buttery flavor and an excellent crunch. The salsa verde packed quite a bit of spice, but could be easily avoided should one not be capsaicin inclined, like Bernais. The pickled nature of the vegetables also lent quite a nice tang, while the tender pork contributed its own injection of smokey flavor. 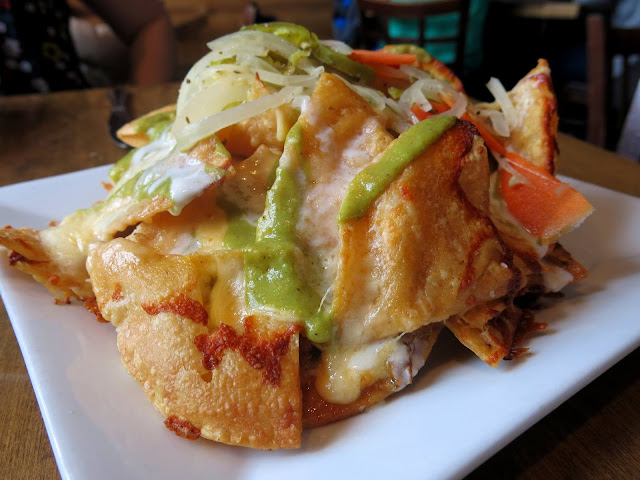 Bernais picked the BELT (a BLT with an egg added) for her entree. The L portion of the sandwich had been replaced by arugula, while the T portion was represented by a thick slice of fried green tomato, which Bernais thought was a stroke of genius. The bacon, while substantial, didn't over power anything else, making for a rather well balanced bite. Bernais especially liked the herb mayonnaise, which helped to keep some of the otherwise rich flavors in check with a subtle freshness. 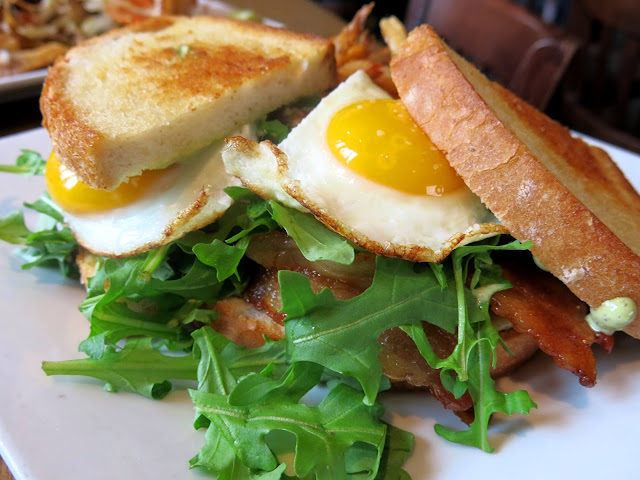 Brandy picked the Breakfast Burger, the center piece of which was a patty made from 70% brisket and 30% bacon. Right from the start, Brandy could actually taste the bacon, which made it one of the more distinctive breakfast burger's she's had to date. The "tavern sauce" on the burger had a lovely mustardy flavor to it, which combined rather well with the sweet and sour pickle slices, and the addition of some deep fried onions made for an excellent contrast in texture to the soft brioche bun. "I have to say that I do rather enjoy having my bacon inside the burger rather than topping it," said Brandy, "It's an entirely different experience, and yet a familiar flavor. A lovely surprise!" 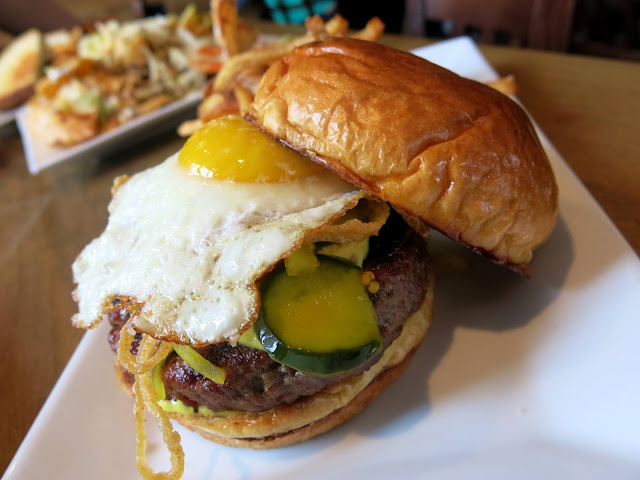 As Bernais and Brandy snacked away on the remaining nachos and some excellent thin cut fries, Brandy casually watched the rest of the bar. Every table was filled with smiling groups, all of them happily chattering away or breaking off to visit the Make-Your-Own station, and though the televisions were playing a rather important game, most people seemed too engrossed in their conversations to pay much attention. The friendly servers hopped from table to table, taking the time to make knowledgeable recommendations for the first time visitors, yet kept pace with the busy flow of brunch time service. "You know, this does seem like the sort of place one could grow very accustomed to," said Brandy. "You think you might become a regular, eh?" asked Bernais. "Sadly, in order for this to be my new corner pub, I'd have to actually live around the corner from here, which I don't. But, if I could pick it up tomorrow and move it to my corner, I certainly would consider it!" 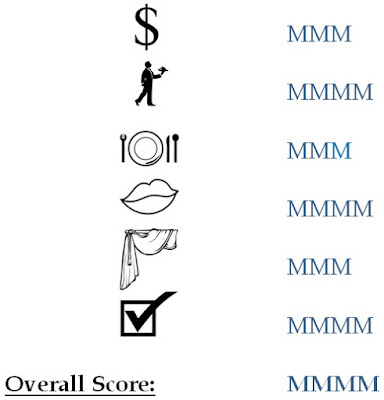