Cafe des Architectes or An American Bruncher in Paris 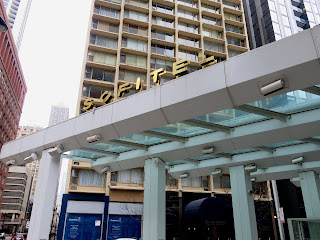 Restaurant Week in Chicago is always one of the most exciting times of the year for foodies of the Windy City, but this time Brandy has taken a special interest. That is because this year, in addition to offering special dinner and lunch menus at discounted prices, some restaurants have added brunch to their Restaurant Week rosters! Indeed a whole slew of Brandy's favorites and wish list place holders have chucked their hats into the ring with $22 deals specifically designed for brunch connoisseurs like herself. "My only issue is that these deals are only good for two weekends! That's only four brunches at best!" Brandy fretted as she reviewed the long list of participating establishments.

Turning to her friend Starr for advice, Brandy soon zeroed in on Cafe des Architectes, the traditional French bistro inside the Sofitel downtown. "I've always been skeptical of hotel restaurants," Brandy admitted to her friend, "because they didn't used to have the greatest reputation when it came to brunch services. Powdered eggs, tasteless waffles, burnt coffee...even the nicest of places used to put as little effort into brunch as possible, it seemed." Starr's assurance that Brandy's fears were very much unfounded (as well as outdated) made the decision final. 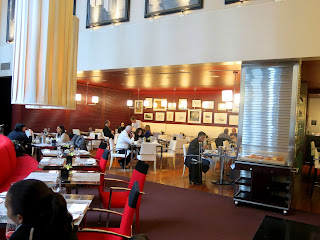 Tucked into the front corner of the hotel lobby, Cafe des Architectes had recently undergone a redesign to bring more color and light into the space. With a clean palate of creams and silvers brought to life with pops of rich reds and purples, Brandy found the interior to be rather classic and chic without seeming too stuffy. 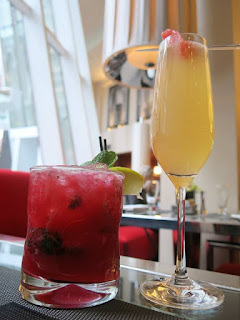 Drinks were soon ordered and brought to the table: a Raspberry Mojito for Starr and a cocktail called the St Tropez for Brandy. Starr's mojito was a simple mix of fresh berries, line juice, ginger ale, rum, and mint, but it packed quite a punch of flavor. It was a little on the bitter side, but Starr put that down to the off season raspberries. Brandy's drink was a combination of grapefruit juice, citrus flavored vodka, ginger ale, and a splash of orange liqueur. She found it quite refreshing with a flavor not unlike a Greyhound, but with the lovely addition of effervescence. It did have a slight bitterness to it, but Brandy didn't mind it at all.

Next, the table was presented with two specials of the house to start off the meal: a basket of freshly baked goodies and some fruit and yogurt. The basket of breads contained flaky and light croissants, both of the chocolate and the classic variety, mini baguettes, and astonishingly tender sweet buns dotted with succulent raisins, which the ladies had to stop themselves from inhaling, lest they should spoil the rest of their meal. Brandy was pleased to see that extra care had been taken with the preparation and presentation of the simple fruit bowl and yogurt parfait, dishes that almost all other restaurants would disregard. The parfait had been topped with some fresh berries, with macerated berries hid underneath a layer of light and crunchy cinnamon scented granola, while the fruit on the side consisted of some fresh strawberries and grapefruit segments in a vanilla syrup. "How genius to add a touch of vanilla to a simple little fruit bowl, " Brandy commented, approvingly. 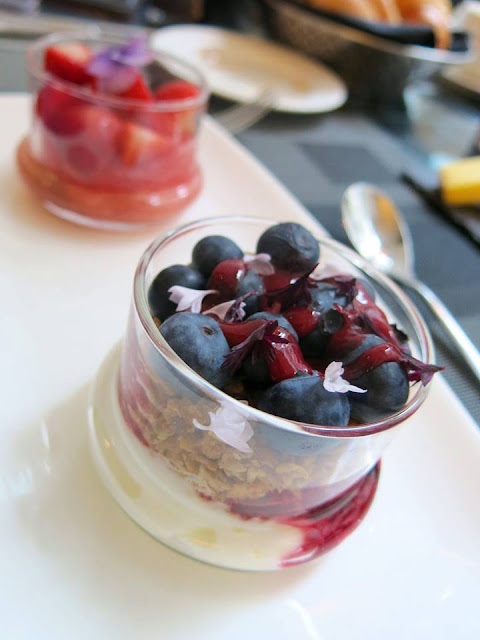 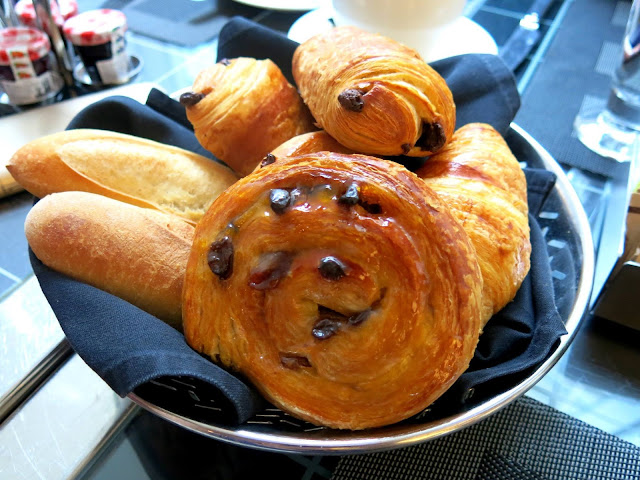 Following their light first course, Brandy and Starr indulged in one of the signatures of the restaurant, a charcuterie plate composed of items from the restaurant's Chestnut Provisions program. Everything, from the cave aged cheeses to the cured salumi, the whole grain mustard, the pickled onions, and the fruit jam was made right there in house using only local and seasonal ingredients. Brandy took a special liking to the rich and earthy mushroom salumi as well as all three of the complex cheeses. Even the slices of miniature brioche that accompanied the plate were an absolute delight. 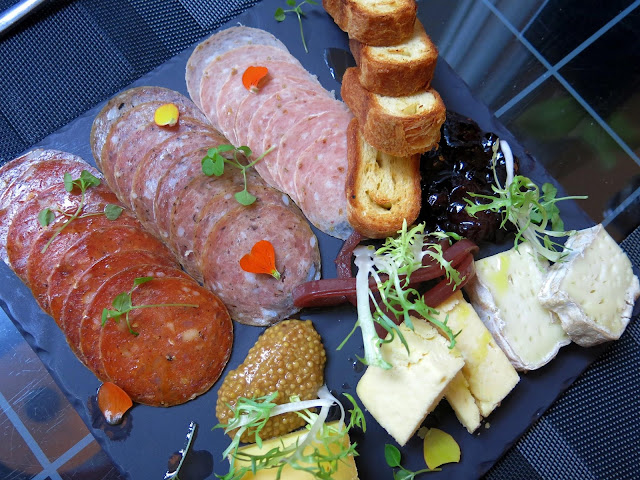 For their main course, Brandy and Starr sampled some egg dishes, namely a mushroom and cheese omelette and the Smoked Salmon Pastrami Benedict. The omelette, Brandy was pleased to find, had a good denseness to it, with plenty of mushroom flavor and a good nutty cheese at its center. The benedict had a base of lightly toasted brioche along with the delicate fish, some peppery greens, and a very rich hollandaise. Brandy loved the subtle smoky flavor of the salmon when combined with the greens, and that the bread perfectly sopped up every drop of the yolk from the flawlessly poached egg. "Their standard benedict is part of the Restaurant Week brunch special," Starr pointed out to Brandy, "along with that fruit you liked so much and some of their fresh juices." "Well, that is quite a well thought out deal then, I should think!" Brandy exclaimed. "Sweet and savory in one go. What else could one ask for?" 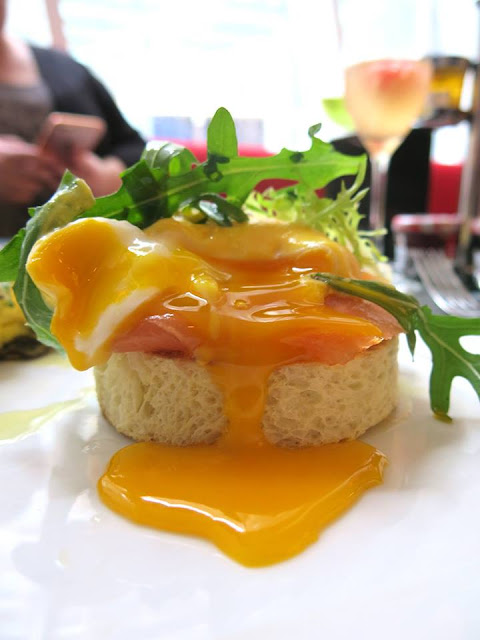 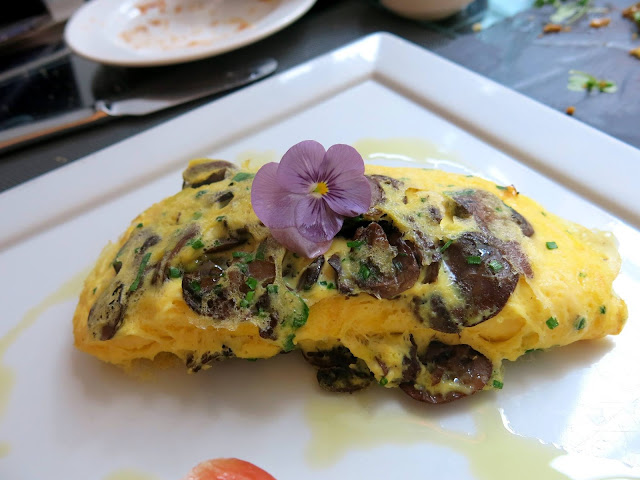 Speaking of sweets, Brandy and Starr ended their meal with a pair of sugary indulgences, namely the Brioche French Toast and the Buttermilk Pancakes. Though seemingly simple dishes, they had once again had a lot of thought and care put into them, reminding Brandy of why items like these have become such staples of the brunch table. The pancakes, though unassuming on the plate, had a brilliant tang to them from the buttermilk, and a slight chewiness that she really enjoyed. "It's rare these days that I find a plate of plain pancakes that I could finish off all by myself. These are magnificent!" Brandy gushed. The French toast was admirable with its softness and eggy flavor, and even the spiced and candied pecans on top gave it a little variety of texture, but it didn't quite measure up to just how unexpectedly delicious the pancakes were. 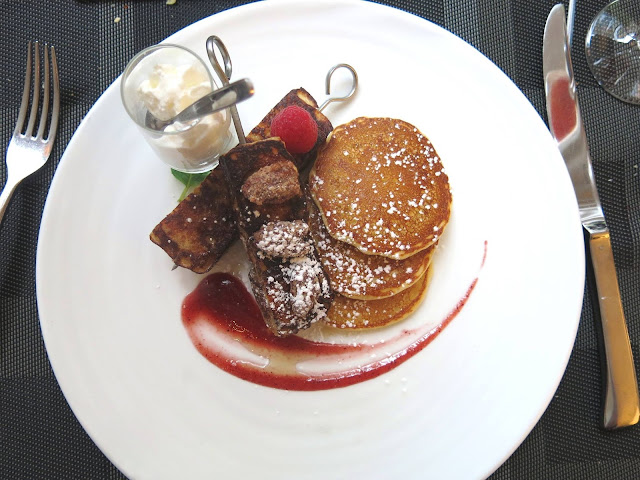 Brandy was quite pleased with everything at Cafe Des Architectes, but she especially took enjoyment in the attention to detail paid to even the smallest of of things on the menu. "That is truly the height of quality food, when even something as simple as a fruit plate or a pancake has been given a gravitas equal to that of a more complicated entree," as Brandy put it. "Uggh," Starr moaned as they stood up from their table, "I think we just ate a few too many carbs. I need a nap!" "Nonsense!" Brandy admonished her, "We have three more brunches to get to! Restaurant Week doesn't last forever, you know!" 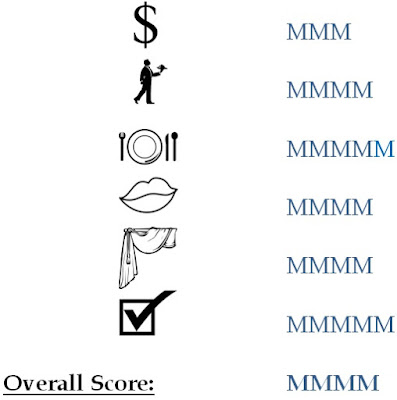