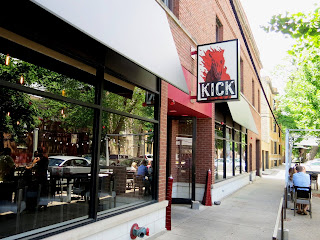 Brandy has a complicated history with spicy foods.  While she is admittedly a bit of a coward when it comes to climbing the Scoville scale, she has acquired a certain level of tolerance for the hot stuff over time.  It was this realization that she actually enjoys moderate amounts of spice that she attempted to explain to her sweets loving friend, Mama Bee.  "Where as I used to be so afraid of spice that I rarely even added salt to my food, I now find that I occasionally crave a bit of heat," she said, surprising even herself.  "Oh, not me!" exclaimed Mama Bee, "Spice and I will never be friendly."  "But occasionally, spice can get along quite well with sweets, can it not?"  "No thank you!"  "But what about honey BBQ sauce?"  Mama Bee pursed her lips.  "Alright, you may have a point."  "I think we need to be a little brave and seek out some spice the next time we brunch.  You and I will learn to love the heat!" 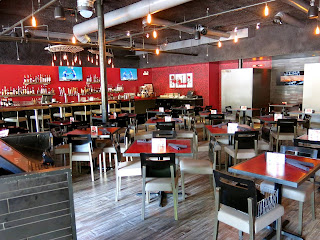 So Brandy chose to take Mama Bee to Kick, a restaurant themed on spice and featuring a mix of world cuisines.  The restaurant resides in the old Sola space, a fact that understandably elicited mixed feelings from Brandy, and features a gorgeous patio as well as a spacious interior.  The layout of the inside hadn't changed much from its previous incarnation, but the color scheme of red and black with exposed brick walls and raw wood floors along with several fire features certainly spoke to the spice that was in store with the food. 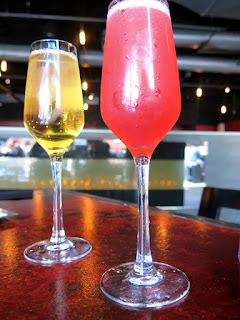 Starting the meal off with some liquid courage, Brandy and Mama Bee ordered up some cocktails.  Mama Bee went with the Peach Mimosa, which was nicely bold in its flavoring, quite sweet, and very bubbly.  Speaking of bubbly, Brandy picked a cocktail called the Bubbly Berry.  This drink was lighter, less sweet, and more refreshing than the mimosa but still seemed to walk along the same path, with lemon juice, elderflower, berry flavors, vodka, and sparkling wine.  Finding their courage hadn't quite been leveled high enough, the two ordered a few more mimosas in Wild Raspberry and Grapefruit, both of which were very fresh and bright tasting. 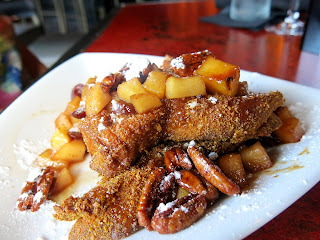 Deciding to start with some sweets first, Brandy and Mama Bee tried a plate of the Challah French Toast.  This toast, straight away, was one of the best French toasts Brandy had ever tasted.  It had been coated on the outside with crushed up cereal ("Who is this Captain Crunch anyway?" Brandy asked, "I've seen his name around town.  Does he pilot one of those cruise ships docked at Navy Pier or something?")  and then topped with a cinnamon apple compote with cranberries and candied pecans.  Because of the coating, the outside had a nice light crunch, while the inside had a melty texture.  The apples and cranberries added a nice tartness to counteract the sweetness of the dish, and the pecans, which actually had a bit of spice to them, provided a contrasting crunch. 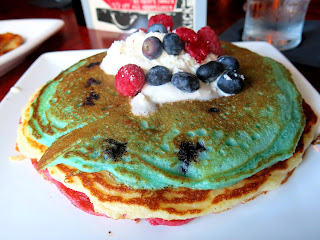 Still avoiding the inevitable, they next sampled a special of the weekend, some Red, White, and Blue pancakes.  This included one of each of the Red Velvet, Blueberry, and Buttermilk Pancakes, topped off with some fresh whipped cream and berries.  The pancakes were thin and a little chewy in texture, which Brandy liked, with a very buttery over all flavor.  Despite the garish food dyes, each pancake actually had a subtle flavor difference, though Mama Bee detected more of the flavors than Brandy did.  "Even though these are a denser type of pancake, they don't seem too heavy," Mama Bee commented, "And I do have to admit I have a soft spot for colorful sweets!" 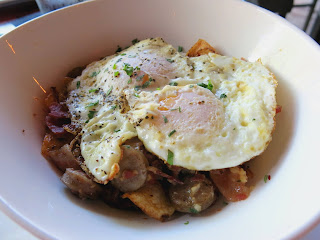 Finally resigning to their delicious fate, the ladies tucked into their entrees.  Mama Bee had decided on something called The Silence of the Hams, which was a hash of sorts with bacon, prosciutto, and sausage over spiced house potatoes and topped with two eggs and a white wine sauce.  The flavor of the dish was quite smokey and savory, of course, with enough meat to please even the staunchest of carnivores.  The potatoes at the base were the real surprise, as they were the main source of heat in the dish, eliciting a slow burn on the palate that didn't overwhelm everything else.  Thinly sliced into rounds, some of them were crispier than others, which Mama Bee enjoyed picking out and crunching on when the heat got to be too much for her.  "Even though this is rather spicy," she commented between sniffles, "I'm beginning to understand how heat can be used to enhance a dish rather than as a gimmick." 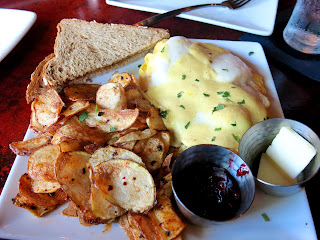 Brandy went with the Lobster Omelette, which came loaded with lobster meat, asparagus, prosciutto, and fresh mozzarella, all smothered in an Old Spice spiked hollandaise and serviced with more spicy potatoes, and toast with raspberry jam.  While the omelette was pretty tame on the spices, it was full to the brim with lots of tender lobster, crunchy veggies, and melty cheese, which Brandy enjoyed.  The potatoes too were almost too much for Brandy, but a bite or two of jam covered toast helped to alleviate the building burn.  "Do you know, I think there might be peppers in this jam as well!" Brandy exclaimed, "And I think I rather like them!"

After downing a glass of water to rinse away the residual heat and wiping their dripping noses, Brandy and Mama Bee headed out of Kick.  Their heat filled adventure had been quite satisfying, with prices right around average and very friendly service to boot.  "I think I may be becoming one of those pepper head people," Brandy smiled at her friend, "I might just start carrying around a bottle of hot sauce in my bag."  "You could barely handle some red pepper flakes on those potatoes and you're going to start dousing everything in hot sauce?" Mama Bee scoffed.  "Maybe you're right.  Well then, I suppose I just have to carry around a thermos of hollandaise instead, as per usual." 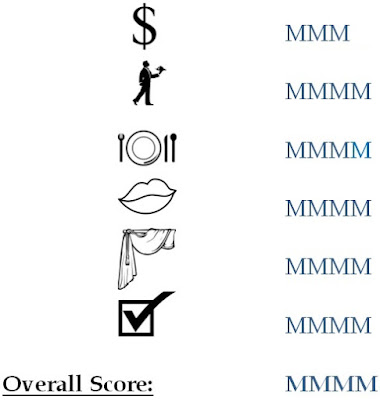