World Burger Tour at the Hard Rock Cafe and GIVEAWAY! 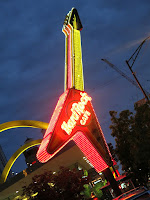 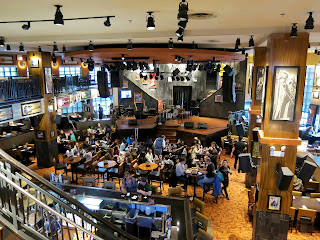 A few weeks ago, Bunny was informed by Brandy that the Hard Rock Cafe was hosting a little event called the World Burger Tour through the end of June, in which the rock and roll restaurant would be showing off burgers with lots of international flair and flavors.  This meant that Bunny would have the chance to relive some of her favorite culinary mouthfuls from across the globe without leaving a single restaurant.  However, there was one problem; getting to try more than one of the burgers on offer without developing an exploding gut.  "I'm fairly sure which of their offerings I'm leaning towards," Bunny mused, thinking of the English Breakfast Burger, "But I would like a wee little taste of some of the some of the others.  I can't bring Brandy, because trying to sample something off of her plate would be like doing battle with a snapping turtle.  But bringing someone along is not such a bad idea.  In fact, I may bring more than just one someone..." 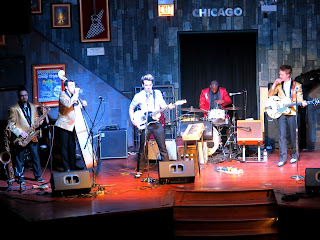 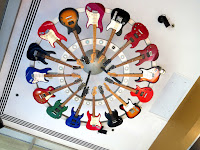 And so after convincing Bailey and Hawk to accompany her, Bunny and friends headed into the Hard Rock for a large dose of meaty goodness.  That particular night, a band called Lance Lipinsky & the Lovers set the tone for the evening, playing vintage rockabilly and swing numbers on the stage at the back of the restaurant to the delight of the crowd.  Seated at a table on the second level just under a guitar once owned by Richard Marx and across from Billy Joel's blazer, Bunny was able to enjoy the music as well as the conversation with her friends. 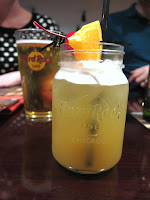 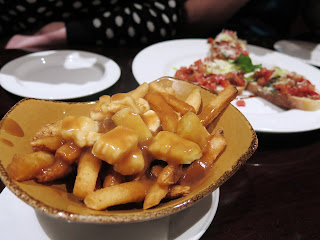 The meal began with cocktails, of course, like the All Jacked Up, a delightfully tropical cocktail made with two types of Jack Daniel's whiskey, spiced rum, and fruit juice, or the Crisp Sipper with gin, cucumber, lemon, orange, and raspberry flavors, both of which came served in a Hard Rock emblazoned mason jar.  Next, the table ordered up some appetizers, feasting on a fresh tomato bruschetta and a surprisingly authentic poutine.  "Now don't spoil your appetites," Bunny warned them, "I've heard these burgers are pretty big!" 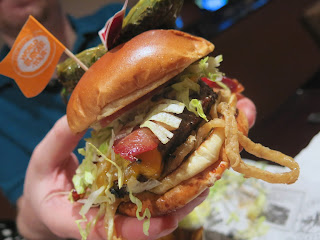 Hawk had gone with the Java Lava Burger, which took the flavors of Seattle as its inspiration.  The burger itself had been prepared with a custom espresso rub, then topped with melted cheddar cheese, bacon, crispy onions, and a spicy sauce, and then garnished with a whole fried pepper.  Hawk liked that the burger started with a classic combo of beef, cheese, and bacon, and built on it with a good amount of spice and flavor.  Feeling adventurous, he even added on some of the new Chili Spiced fries for an extra bit of kick. 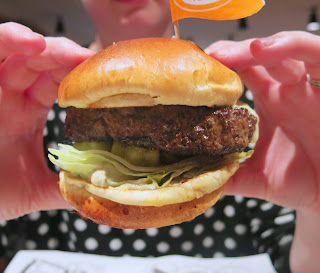 Bailey went with the Jamaican Jerk Burger, which came topped with mango and jalapeno cream cheese, banana pepper slices, and jerk seasoned mayo.  Bailey was especially pleased that her burger came perfectly rare, as per her request, and she really liked that the spice on this burger built slowly with every bite.  The cool cream cheese helped to balance out the particularly pungent peppers, and the jerk spice very nicely set off the meat and made sure that the burger was the foremost flavor.  Bailey accompanied her burger with some garlic and herb fries, which did a nice job of cooling off the gentle fire on her tongue. 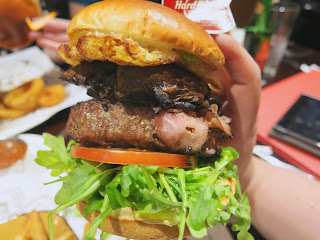 Bunny, of course, went with the English Breakfast Burger, which came stacked high with sliced ham, a sausage patty, fresh arugula, roasted mushrooms, a fried egg, garlic aioli, and a side of baked beans.  "I can barely get my mouth around this thing!" Bunny exclaimed, and ultimately had to resort to slicing off chunks of the behemoth burger when the juice from the mushroom began to compromise the integrity of the bun.  The overall flavors were certainly spot on with the English breakfasts of Bunny's youth ("Could do with a little HP sauce and a roasted tomato though," she commented) and were nicely paired with the Parmesan fries, which came served with a garlic aioli. 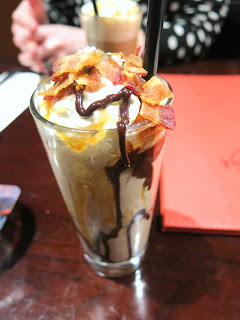 Last of all, with their guts preventing them from ingesting any more solids, Bunny and crew picked a few liquid desserts in the form of boozy shakes.  Bailey chose the Iced Caramel with Irish cream, amaretto, and salted caramel liqueur, which had her swooning after a single sip.  Bunny went with the Twist and Stout, which, as its name implied, contained a healthy dose of Guinness along with spiced rum and chocolate liqueur, blended with vanilla ice cream and topped with crumbled bacon.  "Far be it for me to turn away from anything topped with bacon," Bunny laughed, "But I certainly have eaten my fair share of meat today!"

Bunny was so pleased by her evening of rock and roll and food and drink that she has decided to give away some Hard Rock Cafe goodies to one of our loyal readers!  All you have to do to enter is leave a comment, telling us what city you would like to see inspire a burger, and make sure to include the hashtag #WORLDBURGERTOUR!  Get one entry for commenting here, and additional entries for commenting on our Facebook, Instagram, or Twitter.  A winner will be picked at random by the end of the day Friday June 3rd.  Also, don't forget to stop by the official World Burger Tour site to learn more about the burgers now on offer at the Hard Rock through the end of June and also find out how you can book your own World Burger Tour by visiting every city that has inspired this year's burgers!

The writers of this blog have been provided by Hard Rock International with information as well as any meals featured in order to facilitate the writing of this post.