Max and Benny's or Matzo Ball Soup for the Soul 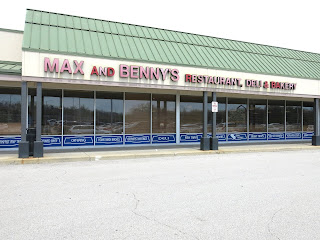 Brandy sometimes worries that her extensive brunching adventures have turned her into a brunch snob.  "There was a time when a simple omelette, a couple of strips of bacon, a buttered crumpet. and a cup of coffee was all I needed to satisfy my hunger, but now I seem to get personally offended if there isn't local vegetables in my eggs, the pedigree of the pig my bacon came from isn't spelled out on the menu, exotic fruit jam isn't on my crumpet, and a meal pairing suggestion isn't presented with my coffee.  Maybe I've become too spoiled by all these chefs vying for my attention and approval with their culinary magic tricks, their modern twists on classics, and their seasonal produce obsessions." 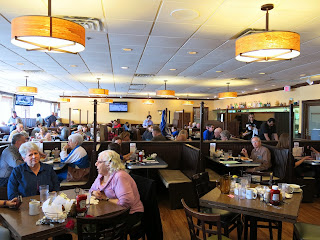 Expressing her fears to her friend Hawk, he had to agree that perhaps Brandy's palate had become too pampered.  "You need some good old comfort food.  A greasy spoon diner or a mom and pop bakery or an established family restaurant," he said, "Hey, that gives me an idea!  What would you say to a road trip out of the city to visit a beloved suburban Jewish deli and eatery?"  Brandy mulled this over.  "I just don't know if my sophisticated palate is up for that kind of thing any more," she admitted.  "We'll put it to the test then.  If you don't like this place I'm suggesting, then it may be true that you are forever ruined." 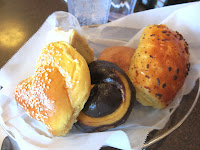 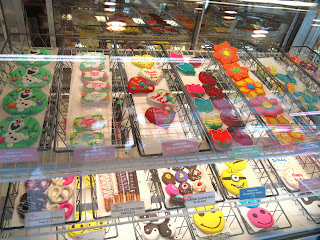 So Hawk and Brandy headed out to Max and Benny's, a 30 year old institution and bastion of good old fashioned Jewish comfort food.  The location was at the head of an unassuming strip mall with the deli at one end and the dining area at the other of the massive space.  Resisting the urge to spend all her money at the deli before they'd even been sat, Brandy took in the unassuming restaurant interior, which was already buzzing with tables full of regulars and the servers who knew them all by name.  "It's not the most glamorous place I've ever been," Brandy said, "But I can't deny that its already putting a smile on my face."  That smile expanded once they were seated and the pair were presented with a basket of fresh bread rolls, and as their waitress (who had been at Max and Benny's nearly 15 years) explained to them, all the bread was baked in house twice a day. 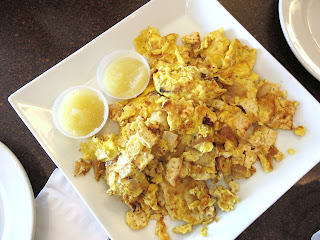 To start off their meal, Brandy eyed up an old favorite of hers, the Fried Matzo (otherwise known as Matzo Brei).  She put in an order for the plain version with onions, which also came served with a side of apple sauce, and was delighted to see the dish presented simply.  The matzo provided a nice slightly crunchy and chewy contrast to the eggs, while the sweetness of the onions was really brought out by an accompanying dunk in the apple sauce.  "Needs a bit of salt though," Hawk commented, to which Brandy pointed out that that issue could easily be overcome by ordering the version with salami the next time. 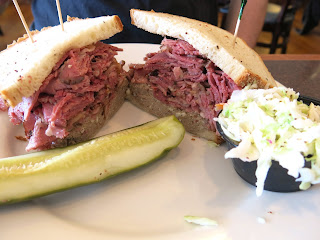 Hawk decided on the Grandpa's Favorite, with consisted of corned beef, pastrami, and chopped liver on rye bread with a side of cole slaw and a pickle.  The beef was perfectly spiced and melt-in-your-mouth tender, which Hawk really admired.  The liver was maybe a tad overwhelming in competition with the other meats, but it ultimately fit in quite nicely.  "Does liking this sandwich mean that I'm now officially an old man?" Hawk wondered.  "No, it means your tastes have finally reached full maturity," Brandy corrected him. 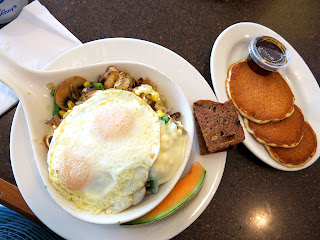 Brandy had picked the Veggie Breakfast Skillet with corn, mushrooms, green beans, potatoes, and cheese, topped off with two over easy eggs and a side of pancakes.  Not only did she get what she ordered, but the meal also came with a wedge of cantaloupe and two slices of fruit cake, meaning Brandy was overwhelmed with things to sample.  The pancakes had an inherent sweetness and denseness to them that actually made them perfect as a side dish ("I prefer my entree pancakes light and fluffy and my side pancakes substantial," as Brandy put it) and the fruit cake was moist and flavorful.  The skillet was jam packed with crisp veggies and melty cheese, Brandy especially liking that the potatoes at the base of the dish had a lovely crisp crust on them to add in a bit of extra texture variation.  "I never thought I'd been swooning over a plate of eggs, vegetables, and cheese, but... swooning I am, none the less," said Brandy. 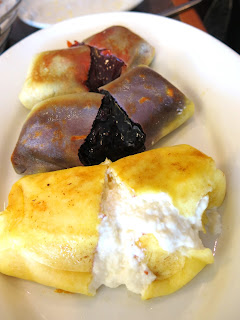 Lastly, they finished off with a plate of Red, White, and Blue Blintzes.  The crepe that formed the foundation of the confections was perfectly thin and eggy, while the filling was plentiful.  The red (cherry) and blue (blueberry) blintzes were sweet, almost like the filling of a pie, and perfect with a scoop of sour cream to balance them out, while the white (cheese) was sweet, creamy, and utterly savorable.  "It almost tastes like cheese cake!" Hawk exclaimed in delight, this being the first ever blintz he had experienced.

Still taken with the incredible food at Max and Benny's Brandy rounded out her day by raiding the deli for bagels, brisket pot pies, noodle kuggels, and matzo ball soup to take home with her.  She had been fantastically charmed by the authentic food, done thoughtfully and with love, served by knowledgeable an hard working servers at a price point that was more than fair.  "I may still be a brunch snob," Brandy said as Hawk helped her to haul bags of food out of the restaurant, "But its good to know I can still recognize good food when I see it, no matter where it's being served.  I tell you, this place is enough to make an old city girl like me think about moving out to the suburbs!" 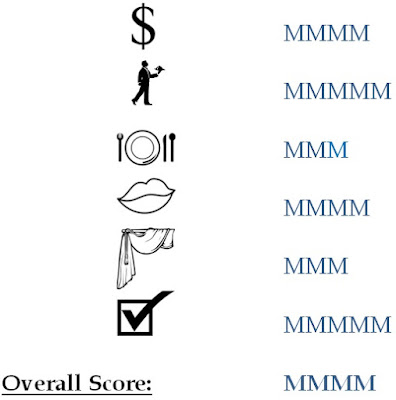