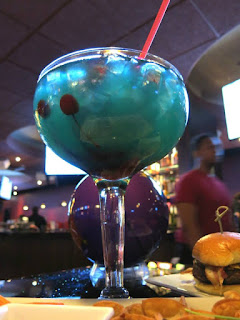 "Things are changing around here every day, Bunny, you'd be surprised," Brandy told her friend over the phone, "Why just down in Lincoln Park there's a new restaurant opening every day in the NewCity complex.  I just visited Yard House, but there are three or four other spots all ready to open their doors any moment."  "Really?  Oh, I must stop in the next time I'm in between flights to look into things.  It makes me so sad to not be able to see what's going on out there!" replied Bunny.

And it just so happened that soon after that conversation Bunny was able to stop into Chicago for a single evening, and following her friend's advice, she headed to the newly opened NewCity plaza to see what all the fuss was about, her first stop being King's Bowling. 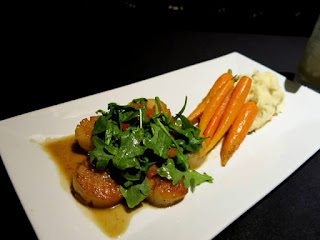 At the front of King's was Max and Leo's, a relaxed pizzeria serving flat breads, wings, and classic cocktails in a swinging bistro-like atmosphere.  Bunny simply adored the Brooksy Pizza with grilled chicken, caramelized onions, mushrooms, mozzarella, and mascapone, as well as the delectable Honey Hot Habanero Wings with their sweet and spicy glaze.  After a few munchies in the front lounge area, Bunny headed into the main area of Kings, which greeted customers with bright red vinyl booths, black-light lit bowling lanes, and what they claimed to be the world's fourth longest bar with sparkling black and gold surfaces and a bartender every three feet.  The whole place had a vibrant, retro feel that put a smile instantly on Bunny's face.

A few other games were scattered around the room, like pool tables, air hockey, and shuffle board.  The back of the location marked off a small area with four more lanes that smallr parties could reserved for private events.  Bunny sampled a little bit of everything, from the surprisingly sophisticated Maple Glazed Scallops and Steak Tips with garlic mashed potatoes, to unique bites like BBQ Pulled Pork Wontons, Southwestern Spring Rolls, and Fried Mac and Cheese Bites, and classic sandwiches with original twists like a fresh Mozzarella Panini, a Turkey, Cranberry, and Brie club, and most intriguingly, a burger called the Don't Knock it 'till Ya Tried It with peanut butter, bacon, pineapple, and sriracha.  The cocktails too had smile inducing concepts, like the One Phish, Two Phish; a fruity, blue colored concoction served in a giant bowl glass with red candy fish swimming in it, the Pop, Rock, and Roll Martini with a fresh flavor and a popping candy rim, and the "Dude," an homage to a certain cocktail made famous by a certain movie, made with chocolate milk liqueur, coffee liqueur, and vodka.  Not only was everything she tasted surprisingly delicious, Bunny was also impressed that as much as possible was done in house, from the sauces to the drink mixes. 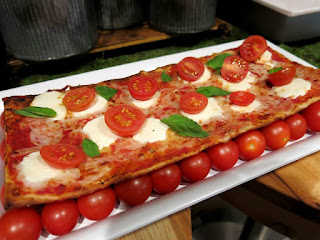 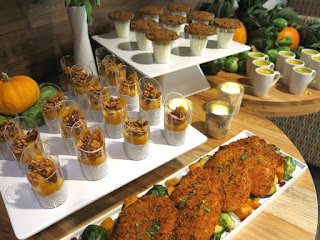 Going in for some lighter fair next, Bunny headed into the newest Lyfe Kitchen location across the way.  This location not only featured some of Brandy's favorite dishes, like the Art's UnFried Chicken with butternut squash, cranberries, and Brussels sprouts, or the irresistible flat breads in varieties like Wild Mushroom, BBQ Chicken, and Margarita, but also an actual little bar at the front where Lyfe bartenders served up a variety of their often overlooked cocktails.  Just as the food is always under 600 calories per plate, the cocktails are never over 200 calories, meaning Bunny could indulge a little without feeling too guilty.  The Michigan Mule was her favorite of the cocktails for its refreshing flavor that stayed crisp and not syrupy.  There was also seasonal beers on tap with a concentration of local brewers like Two Brothers as well as a selection of carefully curated wines and even happy hour specials (another change that happened while Bunny was away). 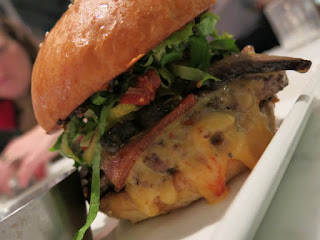 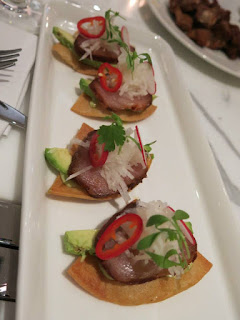 Finally, Bunny ended up at Earls Kitchen and Bar, a Canadian restaurant that focuses on slick, whimsical cocktails and eclectic, thoughtful food in a casual fine dining atmosphere.  Everything about the design of Earls fascinated Bunny, from the bright, but unoffensive lighting to the park bench seating around the bar, and especially the art work which used Chicago's rich tradition of blues and jazz as inspiration, resulting in a stunning portrait of Muddy Waters made up of his lyrics and a back wall covered in three dimensional trumpets over a water color background.   The cocktails were irresistibly adorable, yet sophisticated, with mixtures like the strangely delightful lemon and chocolate flavored Century Sour, which came emblazoned with the word "Flawless" on this egg white foam top, the Cabin Fever with its almost tropical flavor hilariously out of place in a presentation of a tin camping mug, a pine cone, and a sprig of mint, or the crowd pleasing Silly Wabbit made from carrot juice and vodka with a green sugar rim.  The food was very much in the same vein, keeping accessible dishes like steaks, burgers, sandwiches, and pastas at the forefront, but spicing things up with little surprises, such as the Roasted Corn and Poblano Cheese dip with fried naan bread, gorgeous little Tuna Tostadas (which Brandy actually sampled at the Food and Wine festival), and a downright sinful Sticky Toffee Chocolate Pudding, that less resembled the English dessert of Bunny's youth and more a gigantic inside out lava cake. 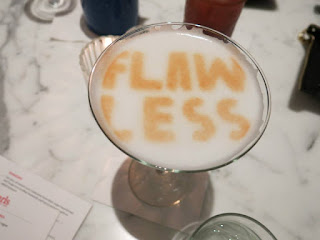 "You were right, things certainly have changed!" Bunny exclaimed to Brandy as she wrapped up her journey, "I don't remember ever being able to access so many different restaurants all in one spot!  Thank goodness they were that close to each other too, otherwise the three cocktails I had at each stop might have gotten me into some trouble by the end of the night!"

The writers of this blog were granted access to all of the mentioned restaurants and events free of charge in order to facilitate the writing of this post.
Posted by Bunny and Brandy at 11:08 AM