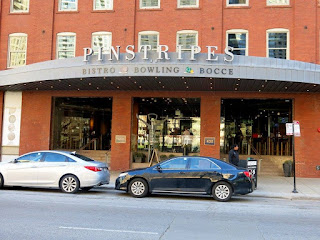 A few weeks ago when Bunny visited the new King's Bowl in Lincoln Park, something ignited in Brandy's mind.  "I used to bowl," she told Bunny later, "And I was bloody good at it too.  I was once one strike away from a perfect game, but got distracted by some noisy video game in the corner.  That's the thing with bowling alley's today, there's just too many flashing lights and shiny things for me to be able to concentrate on the game.  I suppose the same could be said about most everything these days; there's just far too many glittering distractions in this world."

Having acquired a taste for her old favorite past time, Brandy began to seek out some other bowling options, landing on Pinstripes in River East, an old fashioned bowling and bocce complex with not only a full bar and restaurant attached, but a rather impressive sounding brunch buffet.  "Brunch and bowling?" Brandy exclaimed, "I could hardly ask for anything more!" 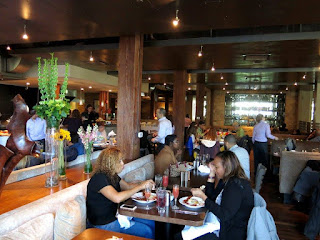 The entrance to Pinstripes was sunny and open, leading off into the bar on one side, some of the lanes on the other, and the restaurant at the back.  The glass front to the establishment meant that the space was sunny and bright and the tastefully done decor of warm woods, pops of floral colors, and exposed brick walls made for a comfortable, yet thankfully for Brandy, non-distracting atmosphere.  The warm woods carried through into the bowling lanes, both on the ground floor and on the second basement level, which Brandy was delighted to see had none of the modern trappings of colored lights, sparkling balls, or flashing screens.  "There we go!" she chortled, "Just what I wanted, some distraction free lanes!  But first, a little nosh, I think, just to warm up the old bones." 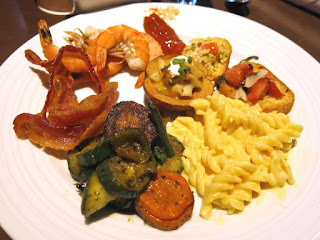 The lush buffet had been laid out at the back of the room with several stations being featured.  The first section that caught Brandy's eye was the hot foods, which contained some standard breakfast fair like scrambled eggs, bacon, eggs, and sausages, but also a fair amount of more lunch appropriate items.  The Mac and Cheese was particularly creamy and delicious, with the pasta being perfectly cooked and not mushy at all, and some sauteed vegetables provided Brandy with the feeling of eating something healthy after consuming a few twice baked potatoes, which were loaded with bacon and sour cream.  The pizzas seemed a little out of place until Brandy realized that the things were being prepared by hand and wood fired in a large over at the front of the dining room. 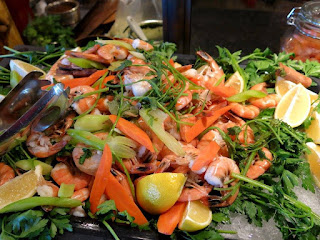 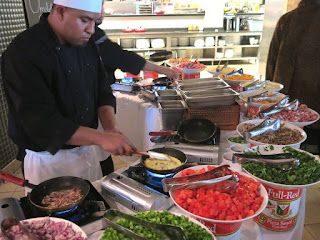 In the cold foods section, Brandy was again surprised to see more than just a few salads on offer.  A pair of fresh bruschettas, one topped with tomato and the other with artichoke, lead the way, then came the Caesar and Market salads, pasta salad, and even fresh seafood with peel and eat shrimp and smoked salmon.  The sweeter side of the cold foods featured some pretty standard looking bagels and muffins, but also a rather enticing yogurt parfait with fresh strawberries and coconut granola. 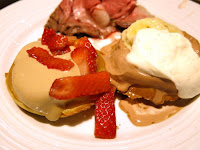 There were several manned stations as well, such as the carving station, where a chef hand carved some roasted turkey, fresh baked fish, and prime rib to order, and the Omelette station, where a duo of friendly chefs cooked up customized eggs with the patron's choice of fresh veggies and cheeses.  Best of all was the Waffle station, where mini waffles were created to order and topped with a variety of delectable toppings, such as whipped Nutella, Balsamic cream, fresh cut strawberries, and Bananas Foster rum caramel.  Brandy absolutely adored these soft little waffles and their accompaniments, contemplating even going back up a few times to try even more flavor combinations. 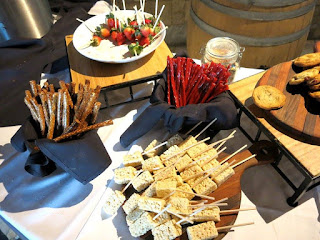 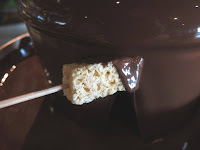 The only reason she decided not to revisit the waffle station was because of the massive dessert table.  There were a few pastries that looked promising, like a creme brulee cheesecake and decadent flour-less chocolate cake, but the real showstopper was the massive chocolate fountain.  Diners had been supplied with a bevy of choices for dousing, like hand made marshmallows, Rice Krispie treats, fresh fruit, and even red licorice whips.  Brandy had a little too much fun dipping item after item into the chocolatey cascade, resisting the urge to throw caution to the wind and simply put her whole face under the thing.  "Nature has its own wonders, but nothing quite as magical as a chocolate waterfall," she sighed, thrusting another few treats into the velvet flow. 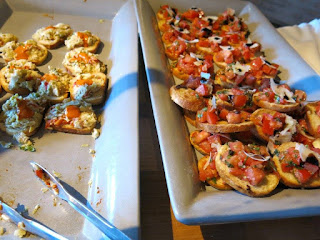 After such a filling and surprisingly well curated buffet brunch (not too mention a full morning of bottomless mimosas), Brandy found that she actually wasn't in a fit state for physical activity, and so had to forgo her original purpose for the visit, waiting to bowl a game on another day.  The friendly staff did a great job at creating a relaxed atmosphere, and the price tag of only $28 a person was almost a steal when the quality of the food was considered.  Though there were plenty of traditional brunch buffet offerings, Brandy felt there was enough originality scattered in to make this one a great option for families or bigger parties who might want a variety of goodies to choose from.  "I may be incapable of throwing a turkey right now," Brandy said to a small child while standing at the chocolate fountain, "But at least I can say I ate one.  And also a fish.  And some cow.  And quite a few shrimp.  I bet no one's ever bowled a shrimp before!  Ha!" to which the small child withdrew his strawberry from the chocolate and backed away from her. 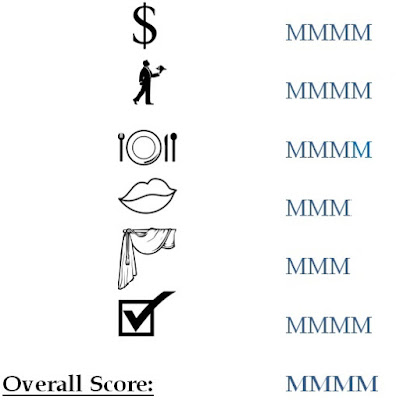