Stan's Donuts and Coffee or Quoth the Donut, Always More! 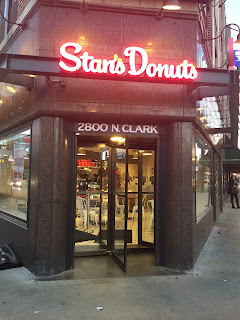 One of the many things Brandy has inadvertently become an expert in while on her varied adventures in brunching is donuts.  She's had the jelly filled and the cream filled, the glazed and the frosted, the yeast and the cake, the sweet and the savory.  "If its fried and sold before noon, I have an opinion on it," as she likes to put it.  But recently, Brandy realized she was missing an important part of her donut knowledge arsenal; she had yet to visit Stan's Donuts and Coffee.  Luckily, since Stan's just opened their new location in Lakeview, Brandy took to opportunity to rectify this oversight. 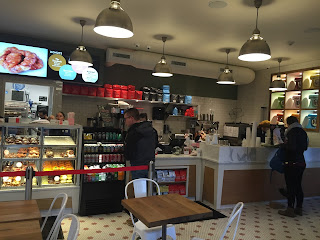 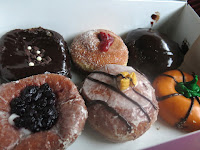 The new Stan's at the corner of Diversey and Clark is pretty tiny, but did host a few chairs and tables for those who wished to take a seat and enjoy their donuts immediately.  Crammed behind the donut counter were several cheerful workers who moved quickly to get the fried dough into the waiting customers' hands as quickly as possible, meaning within five minutes of walking in the door on a busy day, Brandy had an adorably pink box containing half a dozen treats and was ready to head home to enjoy them. 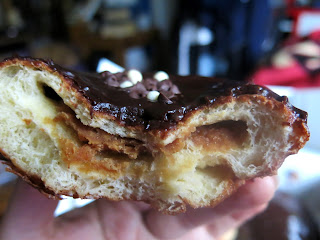 Settling in to the first donut, Brandy eyed up the Peanut Butter Banana Pocket.  This was the ultimate in decadence; a square shaped yeast donut with a chocolate glaze and a peanut butter and banana filling.  Unlike other filled donuts, the unique shape of this one meant that every inch on the inside had filling and not just the center.  As for the filling itself, the peanut butter was thick and a little salty, which was nicely complimented by the sweet flavor of the banana.  The donut itself was of the yeast variety, meaning it was chewy and fairly light in texture. 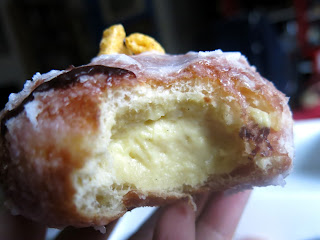 Next Brandy went for the Captain Crunch donut.  Regardless of not having grown up with the infamous Capt'n, Brandy was rather interested to try this one if only because of its uniqueness, but the flavor turned out to be a little disappointing.  The inside seemed to be a simple, yet delicious pastry cream with lots of vanilla flavor, meaning the only thing that differentiated this donut was the two pieces of crunch cereal embedded into the glaze on top. 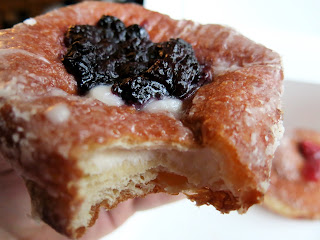 Finishing off the square shaped donuts, Brandy went for the Blueberry Danish.  This was probably her favorite of the lot because it wasn't just a breakfast classic, but it was done in a really unique way.  The base, rather than being a croissant style pastry, was another yeast donut with a light glaze, on the top was a perfect blueberry jam and in the middle was a rich cream cheese.  It was a lucky thing Brandy had another half a box of donuts left to go or she might have run out the door to buy a dozen more of these. 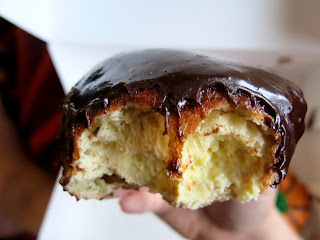 Moving on to another classic, Brandy sampled the Boston Cream donut, a flavor by which she judges most donut shops.  "A lot of places can do a plain glazed or a fantastic old fashioned, but the perfect Boston Cream is a difficult thing to accomplish.  It has to have the right amount of filling, a chocolate glaze that doesn't overwhelm, and a donut sturdy enough to hold together while being consumed," as Brandy pointed out.  This one certainly did not disappoint, being filled with plenty of delicious custard like cream and staying together no matter how many bites Brandy took of it.  They had even magically gotten the cream dispersed pretty well throughout the entire donut, meaning Brandy didn't have to strategically plan her bites to maximize the donut to cream ratio. 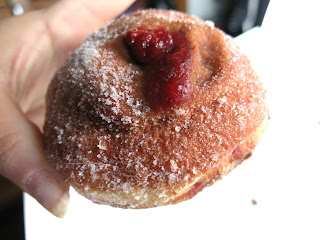 Next up was the Strawberry Bismark, Stan's take on a classic jelly filled donut.  The jam on the inside of this one tasted surprisingly fresh and didn't seem to be cut with any artificial colors or flavors, unlike those seen at other more nationally recognized donut shops.  The donut also seemed a little thicker, so it stood up to the heavy fruit jam rather well. 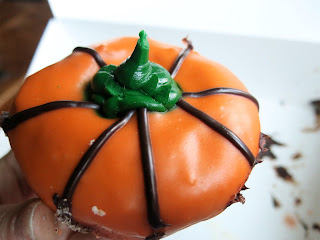 Lastly was the adorable Pumpkin donut.  Despite its appearance, Brandy was saddened to discover that the donut was in fact a simple vanilla cake donut rather than a pumpkin flavored one.  Regardless, the sugary decoration was enough to merit its existence, and the flavor was actually enhanced a little by the chocolate sauce that had been used to create the pumpkin.  The texture of the cake donut wasn't overly dense and would have been perfect with a cup of coffee (or dare we say a pumpkin latte?) to accompany it.

Considering the price, friendliness of the staff, and quality of the donuts, Brandy ranked Stan's among her favorite donuts in the city.  "I think now there is no way my expertise in the field of breakfast pastry can be questioned, " Brandy remarked, proudly, "I wonder if one can get a doctorate in that sort of thing?" 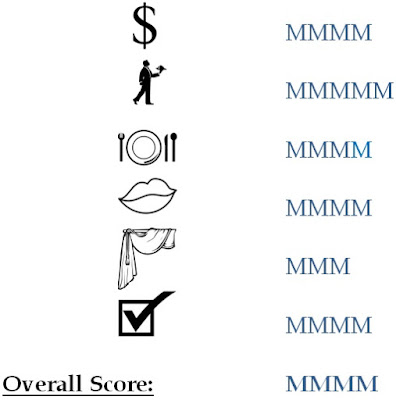