From the Kitchens of Bunny and Brandy: Spicing up Brunch with All Spice Cafe Hot Sauces 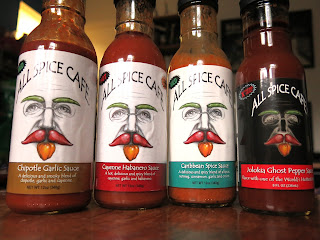 As adventurous as she is with her food, there is one element of taste sensations that make Brandy a little nervous: heat.  A touch of spice here or there is usually fine and even welcomed, but true searing, almost painful heat in a dish has never been Brandy's cup of tea, so to speak.  "I just don't understand why someone would want to destroy their palate like that.  Perhaps its because of how awful most hot sauces taste. If one burns off all their taste buds, they won't be assaulted by a vinagered, bitter, earthy mess of a sauce."

Recently Brandy was introduced to a line of hot sauces from Chicago based All Spice Cafe.  The four sauces ranged in hottness from Mild to Extreme, and while she was skeptical, Brandy was attracted to the fact that the emphasis of these particular products was not just the heat, but also the flavor.  "I'm all for adding more flavor to my food," Brandy mused, "And spice can be wonderful when used correctly.  I suppose I'll just have to be prepared with a big glass of milk on hand." 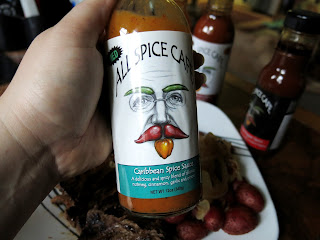 First up was the Caribbean Spice, which Brandy used as an over night marinade for a skirt steak, which she pan seared in the morning.  This turned out to be Brandy favorite of the four sauces as it was so flavorful.  A heavy hit of cinnamon, allspice, and nutmeg was complimented by just the tiniest bit of heat, which served the fatty and flavorful steak extremely well.  Instantly, the jerk spices made Brandy think of warm breezes and tropical drinks, and though there was something fall-like in the taste, it made her long for an afternoon by a BBQ pit.

Next up, Brandy moved to the Medium heat sauce, the Chipotle Garlic.  Brandy reckoned the natural smokiness of chipotle peppers would work well with potatoes, so she used the sauce to coat some baby red potatoes and set them in the oven to roast for 20 minutes at 400 degrees. While the sauce worked its magic on the potatoes, Brandy caramelized some sweet onion on the stove top with a little olive oil and a touch more of the sauce.  All together, the potatoes and onions had the perfect level of heat; just enough to make the mouth tingle, but not enough to be painful.  Brandy really liked how deeply flavored this sauce was and thought it would also work well as a marinade. 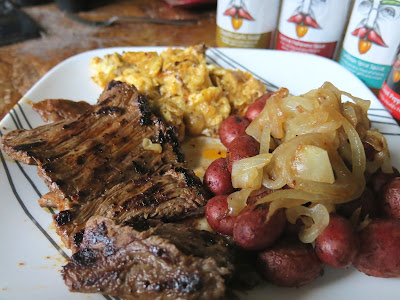 Moving into more dangerous territory, Brandy eyed up the Cayenne Habanero.  She decided to do some simple cheesy scrambled eggs ("Americans like putting hot sauce on their eggs, don't they?" she wondered aloud), using a pungent smoked Gouda and a bit of the frighteningly red concoction.  Just a quick dash to the eggs proved to be the perfect amount, standing up well to the cheese and adding a bit of oomph to each bite.  Though bordering on a little too much fire for Brandy's taste, she did immediately think that this one in particular would be an excellent chicken wing sauce.

The last sauce, the Jolokia Ghost Pepper, slightly terrified Brandy.  Coming in a smaller bottle than the others (this one was 8 ounces while the others had been 12) and boasting a label with inverted colors and a heat level of "Xtreme," the blood red slick of oil on its surface was enough to make her gulp.  Testing the sauce by simply dipping her finger into it and blotting it on the tip of her tongue quickly confirmed Brandy's fear that her bland British palate was simply no match for this one.  While the flavor was tangy, much like the previous sauce, the littlest dab of it onto her tongue made Brandy's mouth burn and tingle for a good twenty minutes or so.  "I'm sure all the pepper heads out there would adore this one," she said after regaining some feeling in her lips, "So I will leave this one to be enjoyed by those brave and foolish individuals."

Overall, Brandy was really impressed that AllSpice Cafe lived up to their promise of flavor first, which ended up complimenting the heat in their sauces.  "I'm glad I haven't been reduced to tears or ended up breathing fire," she sighed in relief, "But  I may be beginning to understand that endorphin rush the fans of heated food are always talking about.  In fact, I might chance another taste of that last one...well, maybe after I've regained feeling in my tongue."

The writers of this blog were provided with products by All Spice Cafe at no charge in exchange for an honest review.
Posted by Bunny and Brandy at 10:34 AM