GT Fish and Oyster or Mother of Pearl 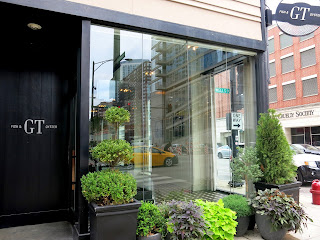 Brandy was becoming more than a little worried about her friend, Mama Bee, and her obsession with honey.  Though Mama Bee's business was in honey (she is of course the owner and operator of the Honey Bee Bakery empire), it seemed she simply could not eat a meal without a generous coating of the sweet stuff.  "What you need is a good dose of savory, maybe even salty food to reboot your palate," Brandy told her.  "But you yourself always say that savory is made better with sweet!" proclaimed Mama Bee. "Yes, but life is all about balance, and right now your diet is balancing on the side of rotting your teeth.  We need to find a good seafood restaurant, perhaps, with lots of briny goodies for you to sample."  "I'm not such a fan of seafood," Mama Bee said, wrinkling her nose.  "When I get done with you, you will be!" said Brandy. 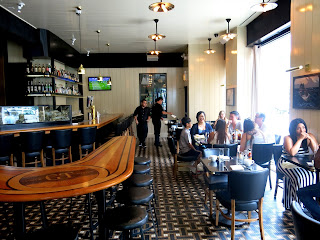 Brandy chose to take Mama Bee to GT Fish and Oyster, one of the original oyster bars that seem to be popping up everywhere in Chicago these days.  GT was unsurprisingly rather hip and modern inside with a slick black and cream color scheme and warm metallic accents.  The little nautical touches, like the model ships and the light fixtures made from black rope to look like oyster clusters, helped to warm the place up a little while providing a pretty literal interpretation of the restaurant's specialties. 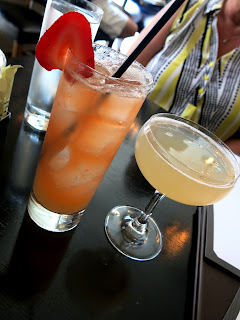 First order of business was to decide on a couple of cocktails: a Peach Bellini for Mama Bee and a No Hitter for Brandy.  The Bellini was very well executed with a crisp, dry taste and a fresh peach flavor.  The No Hitter, which Brandy got with some sour mash, had a tangy kick to it that livened up the palate without being too obtrusive and kept the fresh strawberry flavor from being too sweet. 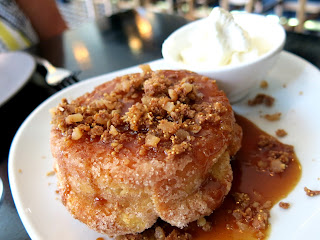 Soon after, food began to make its way to the table.  As Brandy had heard that GT was known for its Monkey Bread, she knew she simply had to try that for certain.  This morning, the doughy delight was in its sweet version topped with caramel and toffee and accompanied by some vanilla whipped cream.  The little balls of dough quite literally melted on the tongue, surrounding it with a buttery caramel flavor.  Indeed, so tender was the monkey bread that it fell apart while attempting to get the pieces into one's mouth, almost requiring a spoon to eat it properly.  The whipped cream, while delicious, almost seemed unnecessary, as Mama Bee and Brandy were too distracted fighting for pieces to actually utilize it.  "Oh, I do like this dish!" said Mama Bee, licking caramel off her fingers.  "Good, now to ease you into the savory realm," said Brandy. 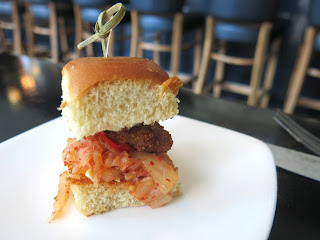 "The place has 'oyster' in the name for goodness sake!" Brandy sighed, but Mama Bee would not budge in her resolution to not let any seafood pass her lips, so Brandy ordered up an Oyster Po Boy Slider for herself.  The little sandwich was a perfect mix of textures and flavors, with a soft bun, bright and sour kimchi, and a single crunchy fried oyster in the middle.  "Normally I take my oysters raw, but this is rather delightful!" Brandy exclaimed, and for a moment, Mama Bee seemed to be regretting her decision. 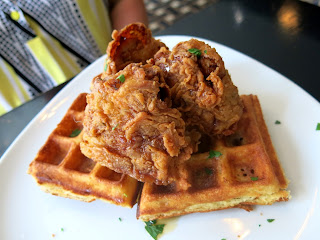 Mama Bee had chosen the Fried Chicken and Waffles as her entree, not only because it wasn't seafood, but also because it came served with Burton's Maplewood Farms maple syrup, a product she had become addicted to thanks to Brandy.  "If I can't have it with honey, this is the next best thing," she grinned.  The chicken had been perfectly cooked and coated in a nicely light and crunchy batter, but Mama Bee really took a shine to the waffles, which were excellently caramelized on the outside, and light and chewy on the inside with a nice malty flavor.  "I only have one complaint," Mama Bee said.  "Let me guess.  Not enough syrup?" Brandy replied.  "You know me too well," Mama Bee grinned. 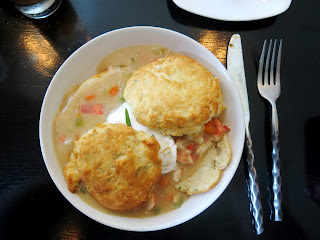 Brandy had decided on the Lobster Biscuits and Gravy as her entree.  The dish certainly put the emphasis on the biscuits, as the two gigantic buttermilk biscuits, which had been cut in half so as to look more like four biscuits, dominated the plate.  While the texture on the biscuits was beautifully tender, their flavor was more than a little on the salty side.  The gravy, which was more of a brown gravy than the traditional cream gravy one normally sees on such a dish, wasn't as rich as Brandy would have liked, but the veggies in it added a much needed bit of texture to the dish.  There was a decent amount of lobster mixed in, but it seemed over shadowed by the biscuits, and Brandy would have liked to have seen two poached eggs instead of one, if only for symmetry's sake.  "It's not disappointing, per say, but I would have liked to see the lobster be a bit more extroverted here,  It should be the star here, when really it's merely making a cameo appearance," Brandy commented, hunting under her biscuits for more little morsels of shellfish.

Though Bandy did not succeed in her goal of convincing Mama Bee to gain a new appreciation for seafood, a fine brunch was indeed had at GT Fish and Oyster.  The presentations could have been a bit more finessed, and though perfectly efficient, the service wasn't particularly friendly, but the quality of the food was what really came through.  "Perhaps next time I will finally be able to convince you to down an oyster or two," Brandy chided Mama Bee, who shuddered a little at the thought.  "I'm afraid all my teeth are sweet teeth, my dear," she said, "And unless those oysters miraculously pair well with honey, I doubt I'll ever be able to enjoy them." 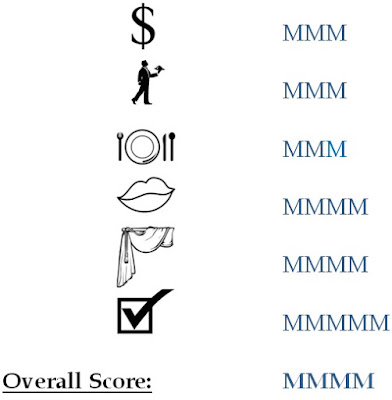