The Peasantry or High on the Hog 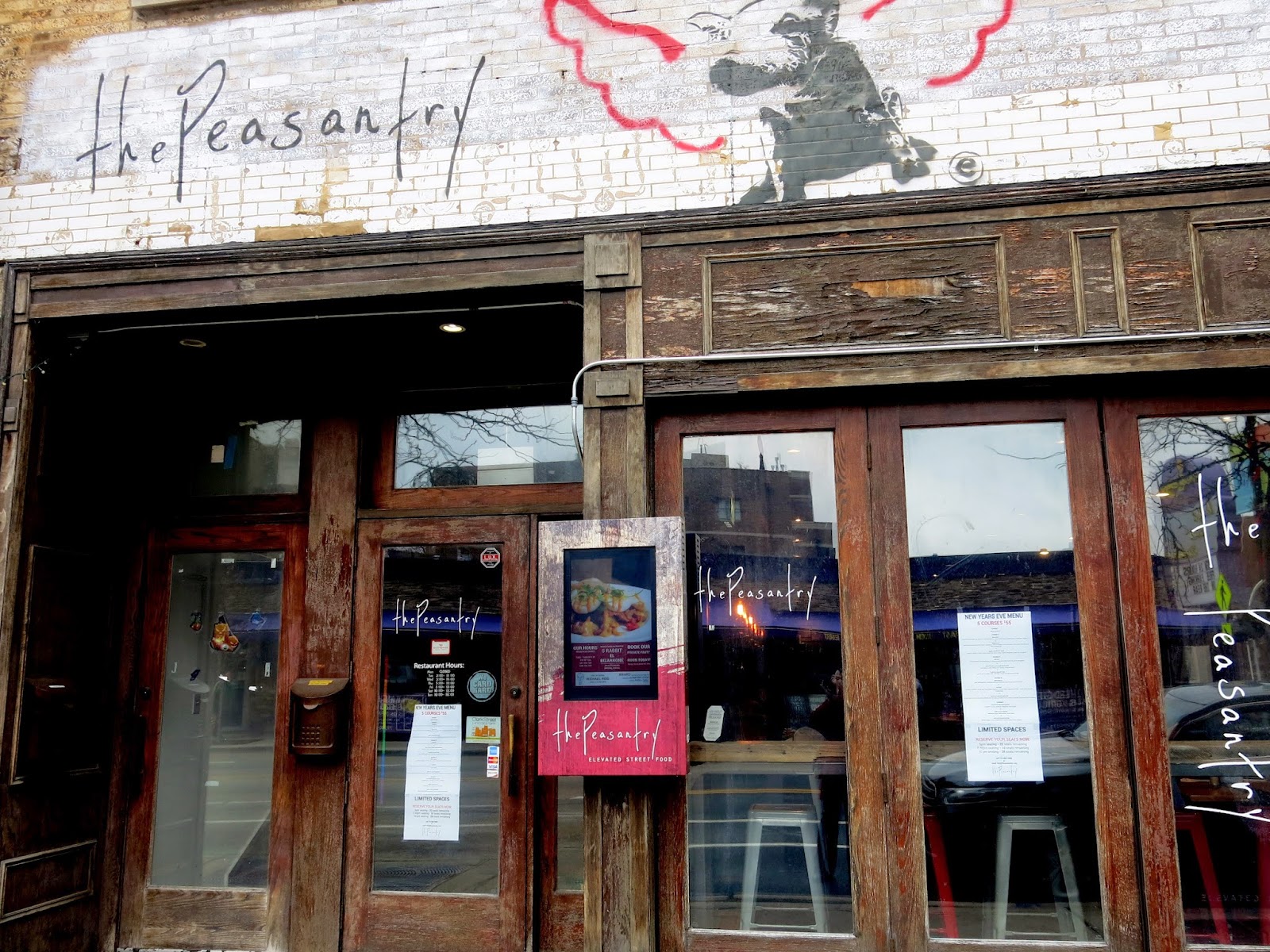 Mama Bee was still stuck on the idea of opening up a new version of her successful business, Honey Bee Bakery, but she was having trouble pinning down exactly how she wanted to go about it.  "I'm not so sure I want to go after the tourist trade any more," she told Brandy one day, "But I still want to revamp my brand, you know?  Make it younger, hipper, more edgy!"  "You make baked goods.  None of those words should ever be used to describe pastries," Brandy grumbled.  "But this is how you keep something relevant," Mama Bee explained, "One has to adapt to the times."  "Well, maybe it's just me, but I think a restaurant should find a personality and stick with it.  That's how you keep your audience.  If you start out edgy, young, and hip, then you stay that way." 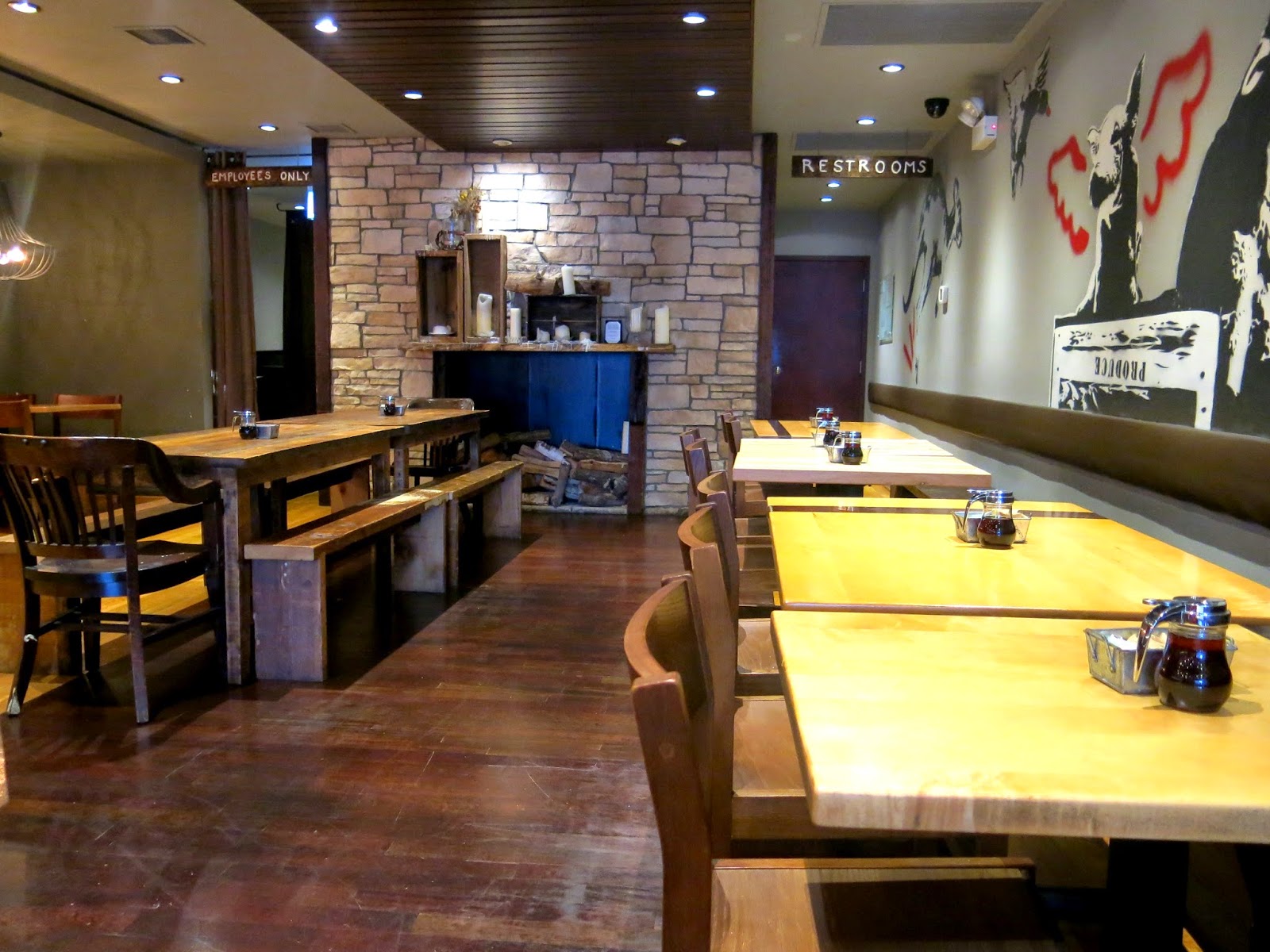 To prove her point, Brandy took Mama Bee to The Peasantry, a restaurant that has recently undergone some changes in the background, transitioning from focusing on street food to comfort food, but still maintaining an eclectic identity.

The Peasantry had a sort of edgy street vibe to it with it's quasi-graffiti walls, but also a rather comfy feel with its heavy wood communal tables, dividing brick wall, and full fire place.  Brandy rather liked the eclectic feel, which, judging from the menu, reflected the food in a way that decor rarely does. 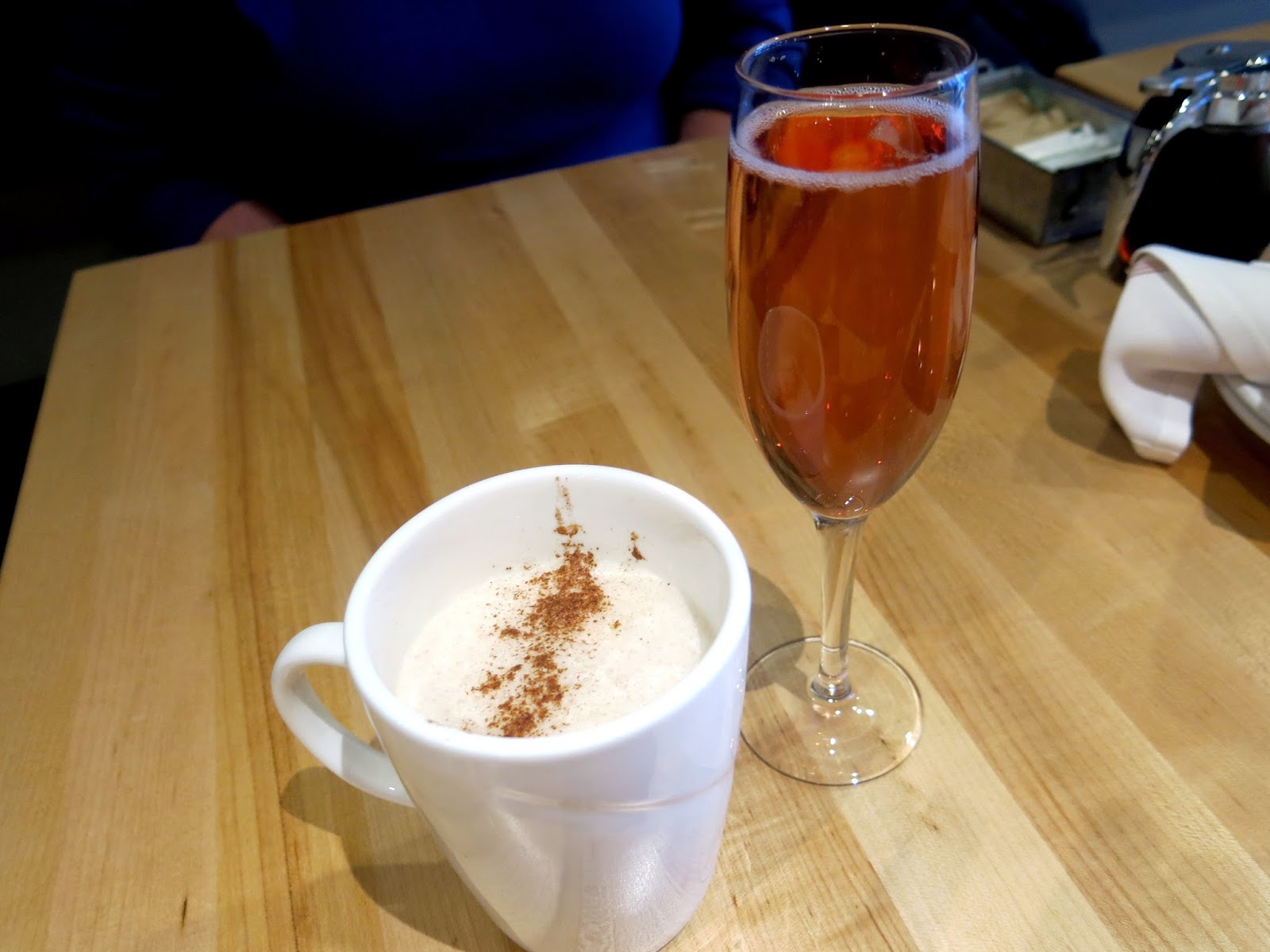 A couple of cocktails were ordered up: A Naughty Chai Latte for Mama Bee and a Kir Royal for Brandy.  The Kir Royal was pretty typical, though the sometimes tooth aching sweetness of the raspberry liqueur was balanced nicely by a dryer champagne.  On the first sip of the warm chai cocktail, a smile spread across Mama Bee's lips.  "Oh, this is just the perfect thing for a dreary day," she sighed.  She thought that the warmth of the spices was perfect, as was the level of alcohol, which didn't overwhelm, but enhanced the flavor. 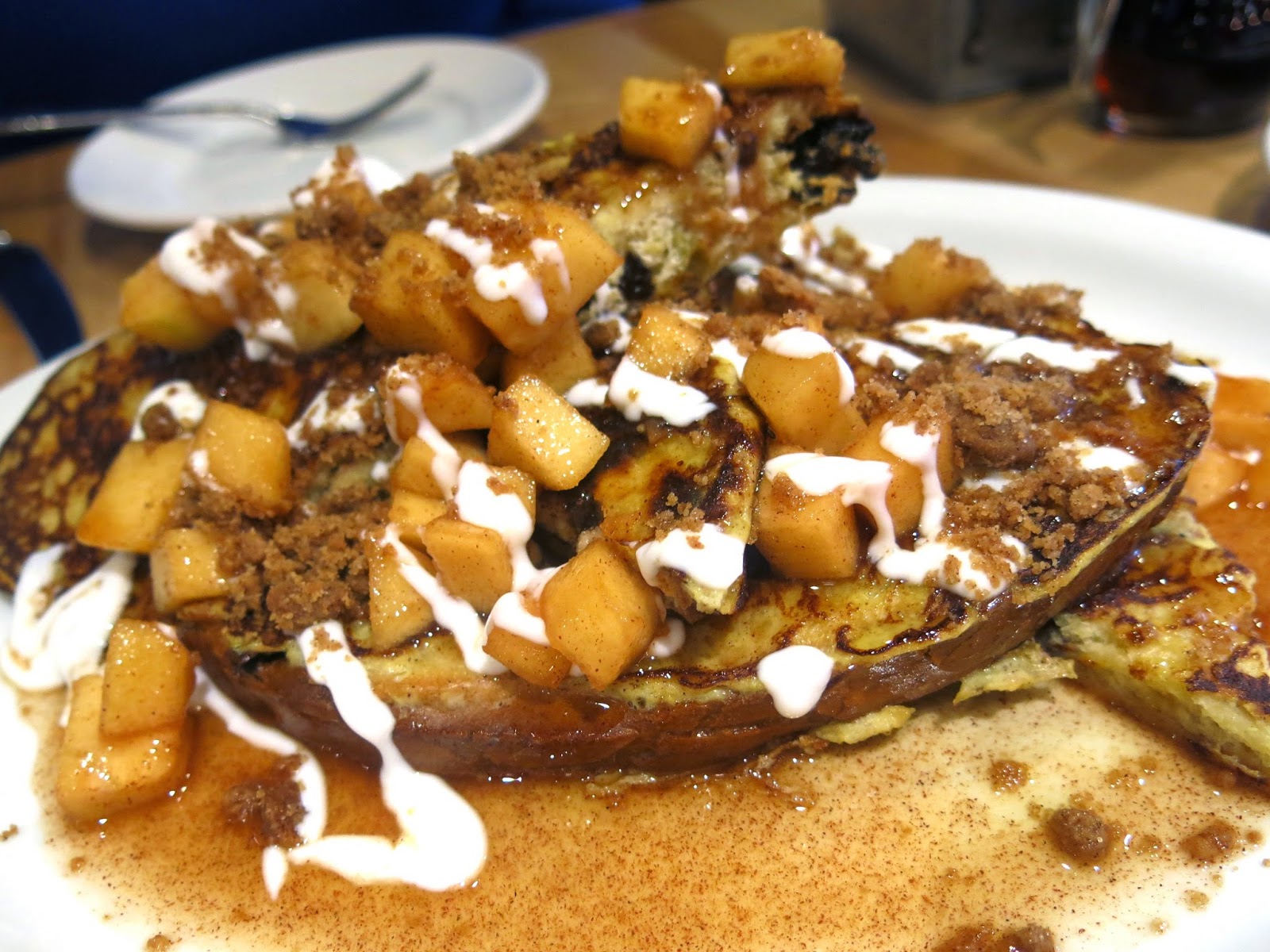 The pair of ladies started by splitting an order of Dutch Apple French Toast.  This was a heavier French toast than Brandy was used to, as it had been made from Irish soda bread, studded with dried fruits, and covered in a tart apple cider gastrique.  Though it wasn't the typical eggy, sweet French toast, Brandy rather liked the dish.  "This is most certainly a wintery dish," she said, chewing over the last bit of bread, "It's rather hearty in a stick to your ribs sort of way, as you Americans would say." 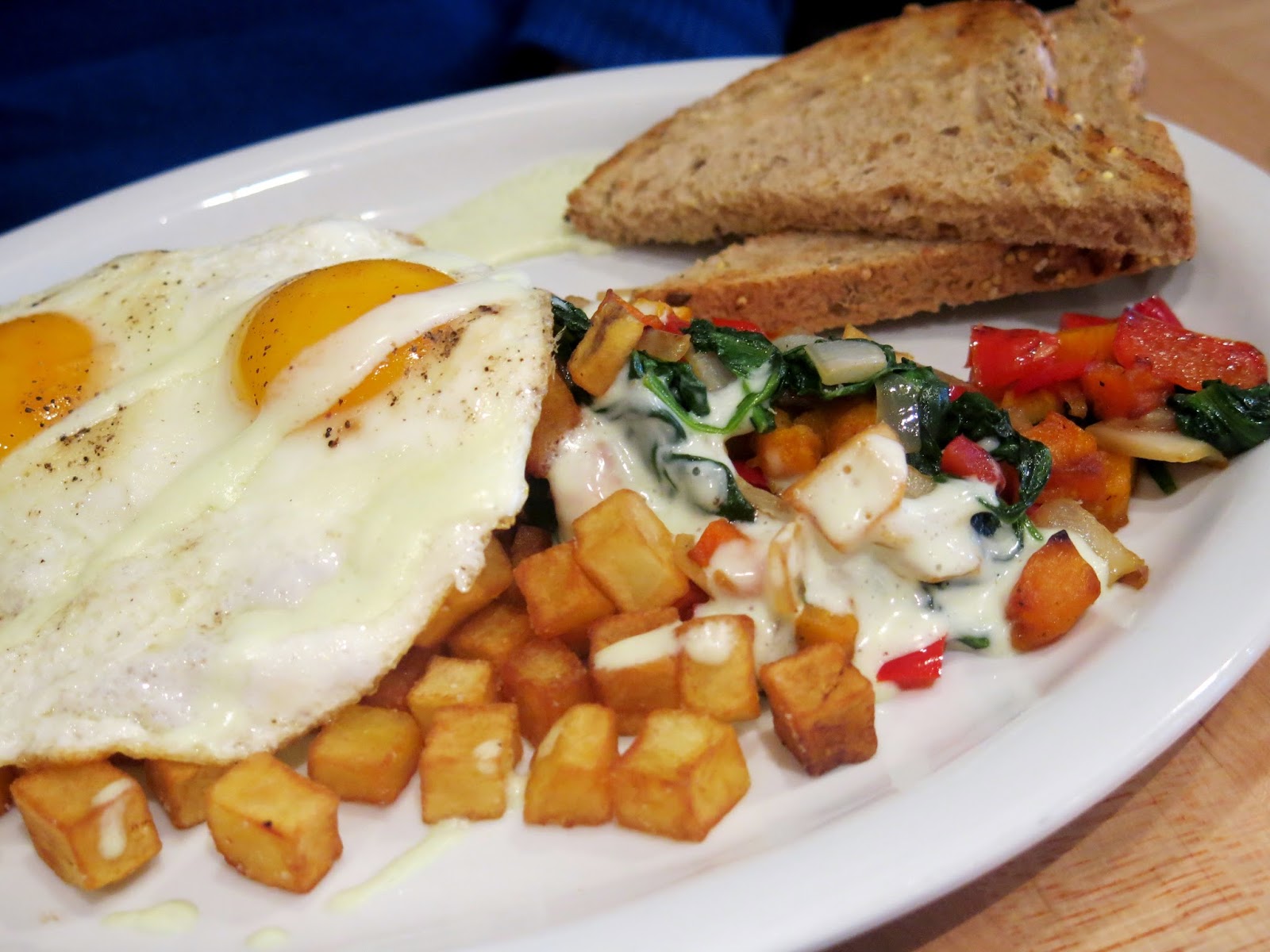 Mama Bee picked the Vegetarian Hash as her entree, which consisted of onions, peppers and butternut squash with crispy potatoes and two fried eggs.  She felt the dish was a little on the salty side, but the veggies were nice and crisp, including the potatoes.  "I do like when breakfast potatoes aren't coated in grease," she commented, "And these are just perfect.  Light crunch on the outside and soft on the inside."  What surprised her about the dish was the poblano cream sauce, which she had expected would have a bit of heat to it, but was actually quite mild and smokey, which helped to liven up the eggs. 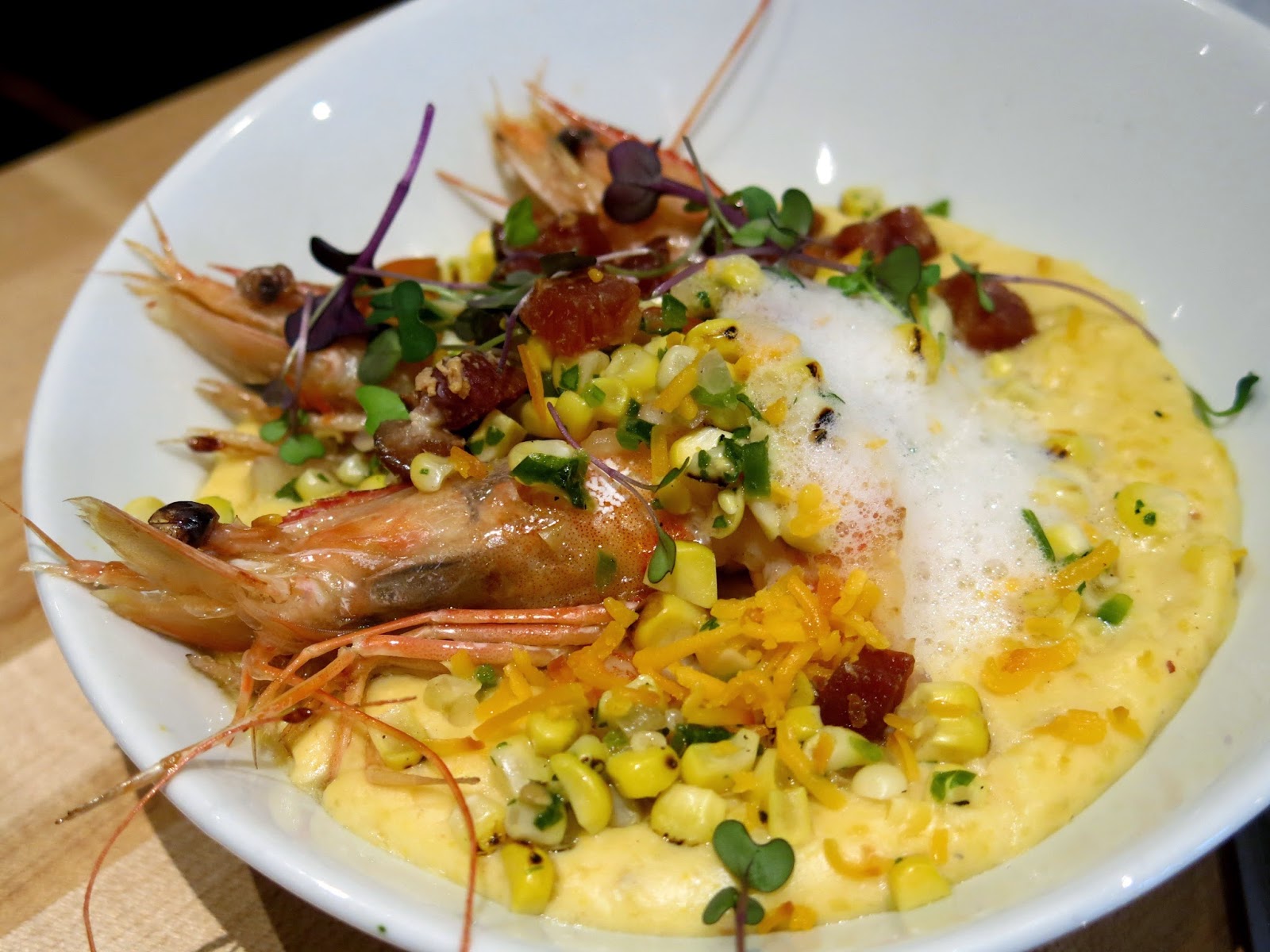 Though tempted to go for the Brunch Dog, which she had previously eaten at Franks 'N Dawgs (The Peasantry's sister restaurant), Brandy instead went for the Shrimp and Grits.  When she was presented with the head on prawns, laying on their bed of cheesy, corny goodness, Brandy was rather amazed and slightly horrified.  "I don't usually like my brunch to look back at me," she said, avoiding the gaze of the shrimps, "But today I'll make an exception."  She found the shrimps to be extremely tender, almost melt in the mouth soft, but a little on the bland side flavor wise.  Once Brandy tasted the grits, however, she could see why the shrimp had been a little more subdued; there were little chewy bits of bacon throughout the golden grits, which were on the denser, more polenta-like side texture wise, (this is how Brandy prefers her grits, as opposed to the more Southern creamy style).  The over all flavor of the dish was brilliantly smokey from the roasted corn salsa with just a little zing of lemon to brighten up the richness.

Brandy and Mama Bee were rather impressed with the edgy "comfort food" style of The Peasantry.  The food was unique, nicely presented, and priced around $10 per entree, which is par for the course at most Chicago bunches.  "I still sort of like the idea of giving my bakery an edgy twist, especially after seeing how well it worked for them," Mama Bee said.  "Or you could, you know, stick with what you've been doing," Brandy suggested.  "No, no.  I'm ready for a change.  What do you think of a croissant in the shape of a Mohawk?" Mama Bee mused.  "I don't think it's ever a good idea to make your food remind people of hair, dear," Brandy replied. 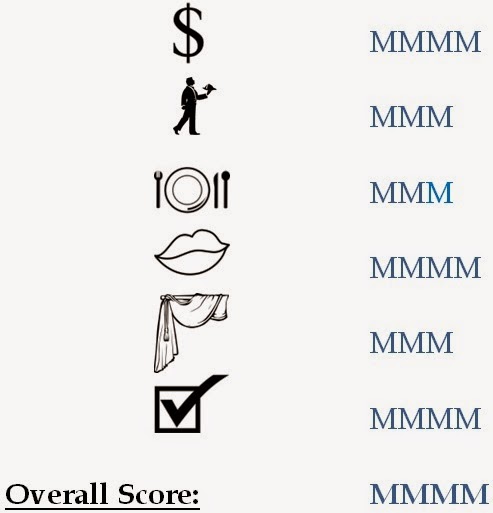