State and Lake Chicago Tavern or Which Came First, the Chicken of the Bear? 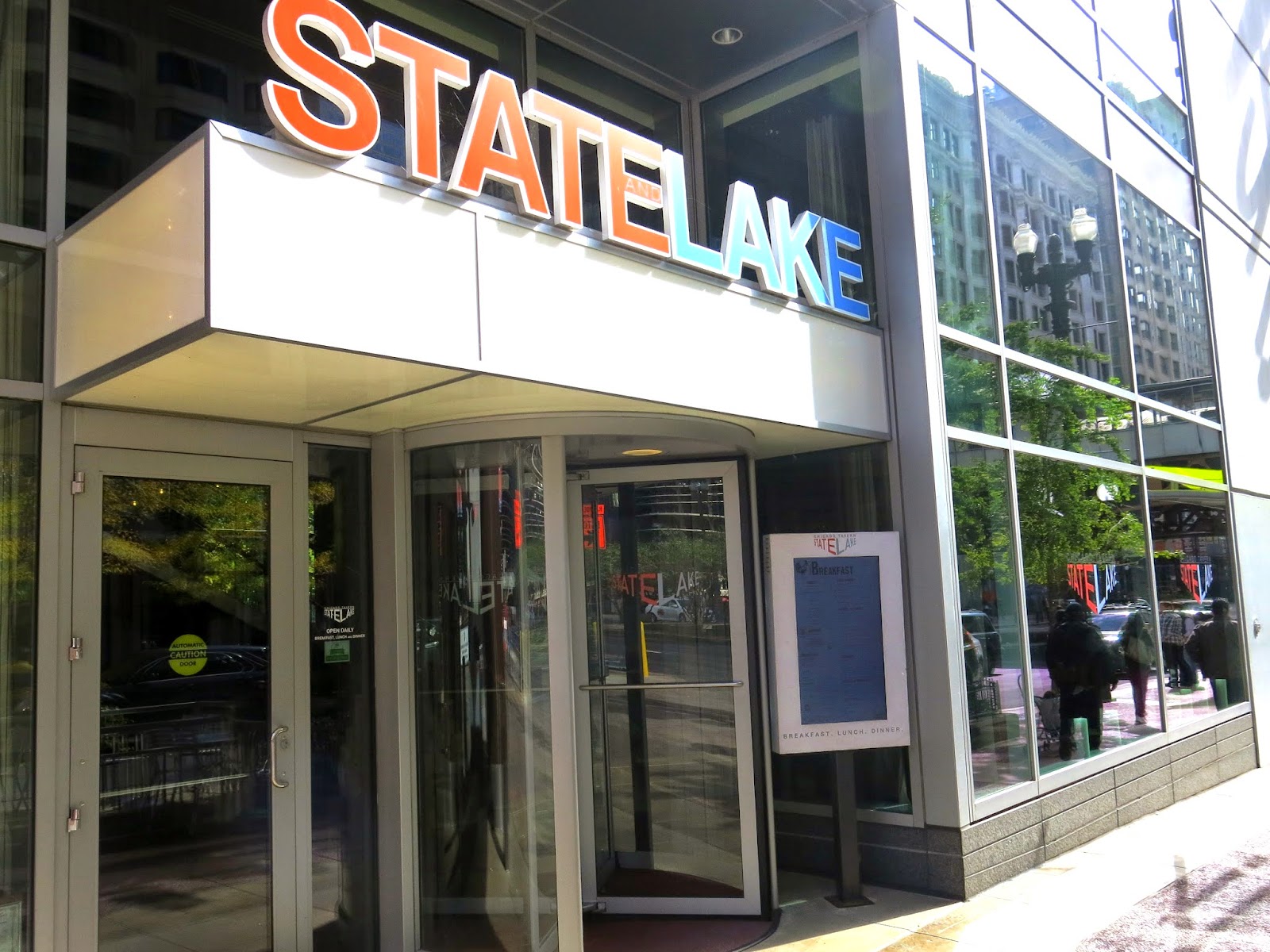 Brandy has been so busy lately with different festivals and giveaways that her brunch reviews seem to be a little few and far between, but mostly she's felt guilty about neglecting a promise she made ot a friend last fall.  "You said you'd watch at least one Bears game with me and I'm holding you to that!" her dear friend Bailey Blue said one day.  "Alright, alright.  Find me a brunch place that puts out a good spread and shows the game and I'm in," Brandy relented

Bailey picked State and Lake Chicago Tavern, a sports bar on the classy side, located on the ground floor of the Wit Hotel in the Loop.  Arriving outside, Brandy was a little more than skeptical, mostly because of a certain experience with another restaurant associated with The Wit, but began to feel more at ease once she'd stepped inside and was greeted by a host of greetings from the staff. 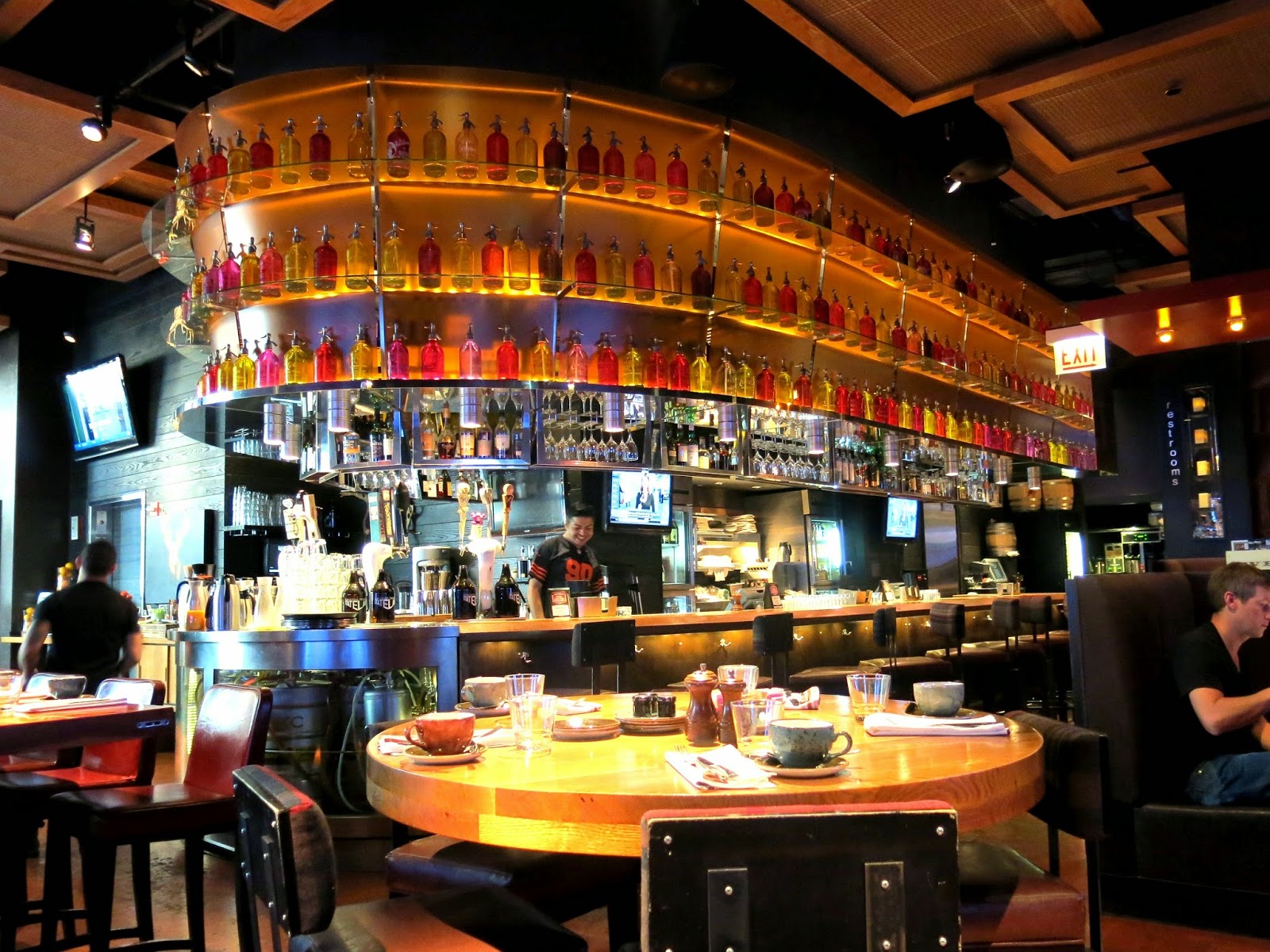 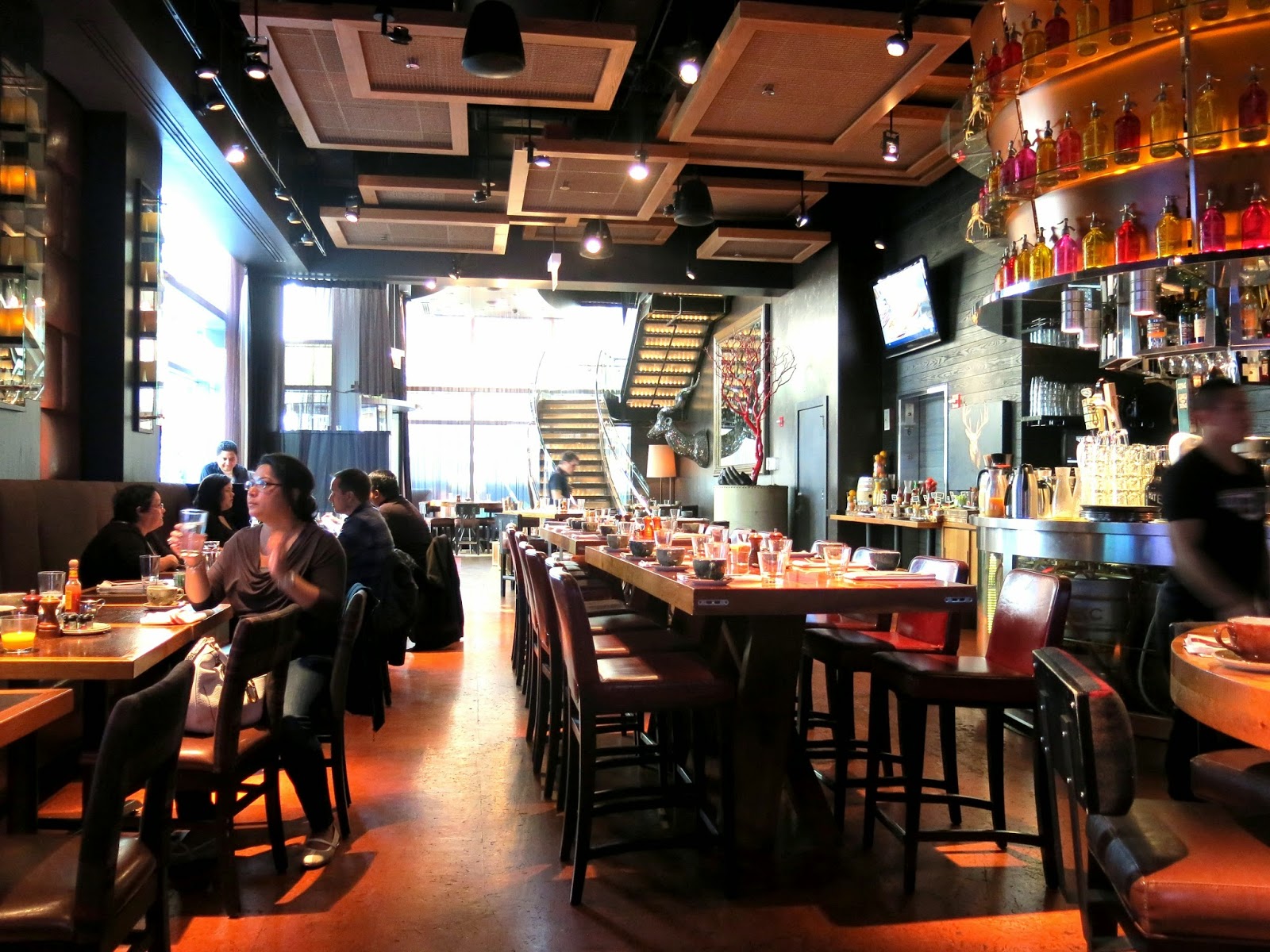 State and Lake had nice touches of color, light, and elegance that made one feel all at once comfortable and pampered.  The woods were warm and rich, the bar sparkled from the yellow and orange bottles that surrounded it, and the whole space came off as rather cozy and welcoming.  As they were taken to their table, Brandy made sure to situate herself to face a window out onto State Street so she could people watch, while Bailey focused in on a television for a good view of the Bear's game. 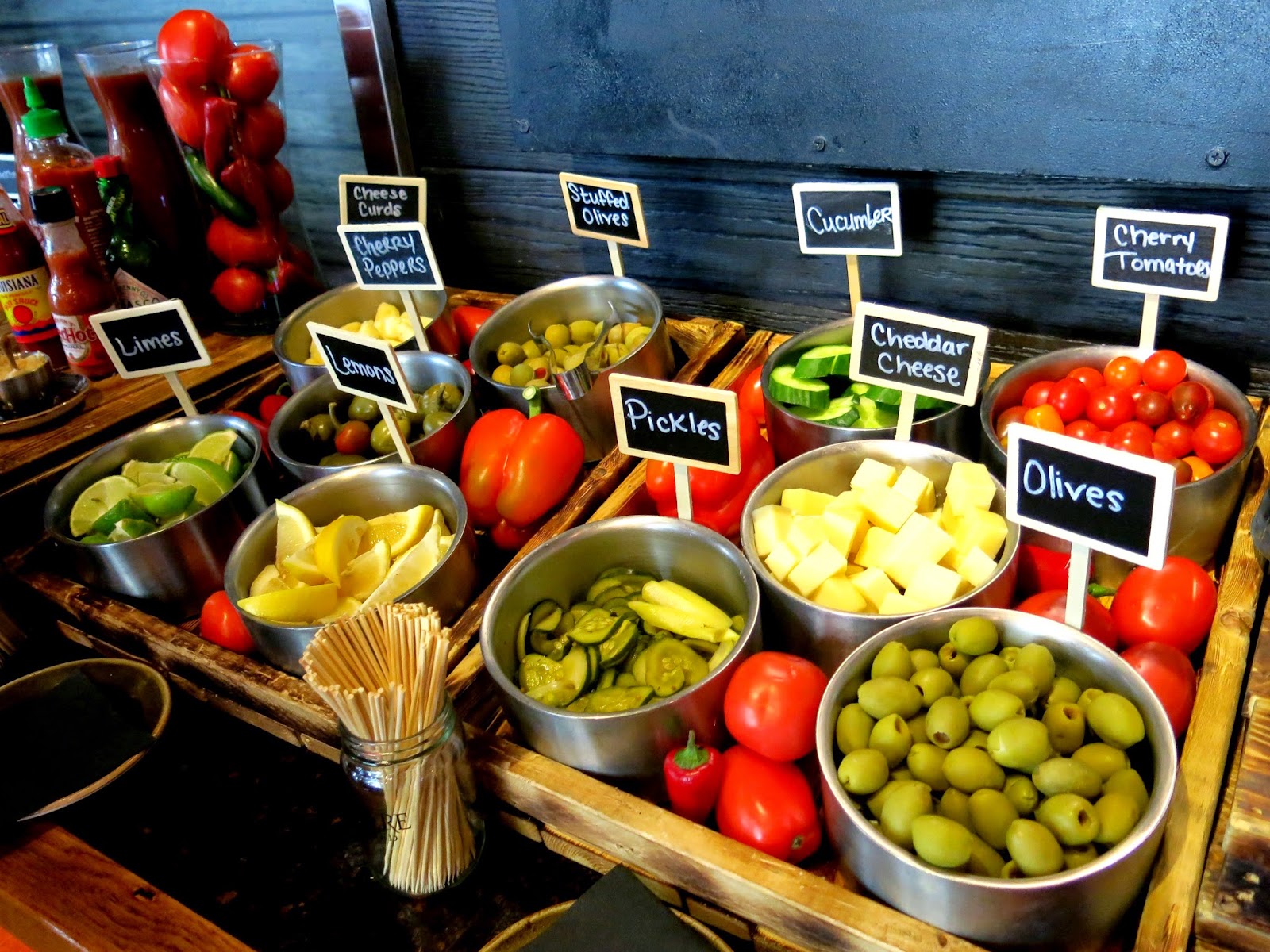 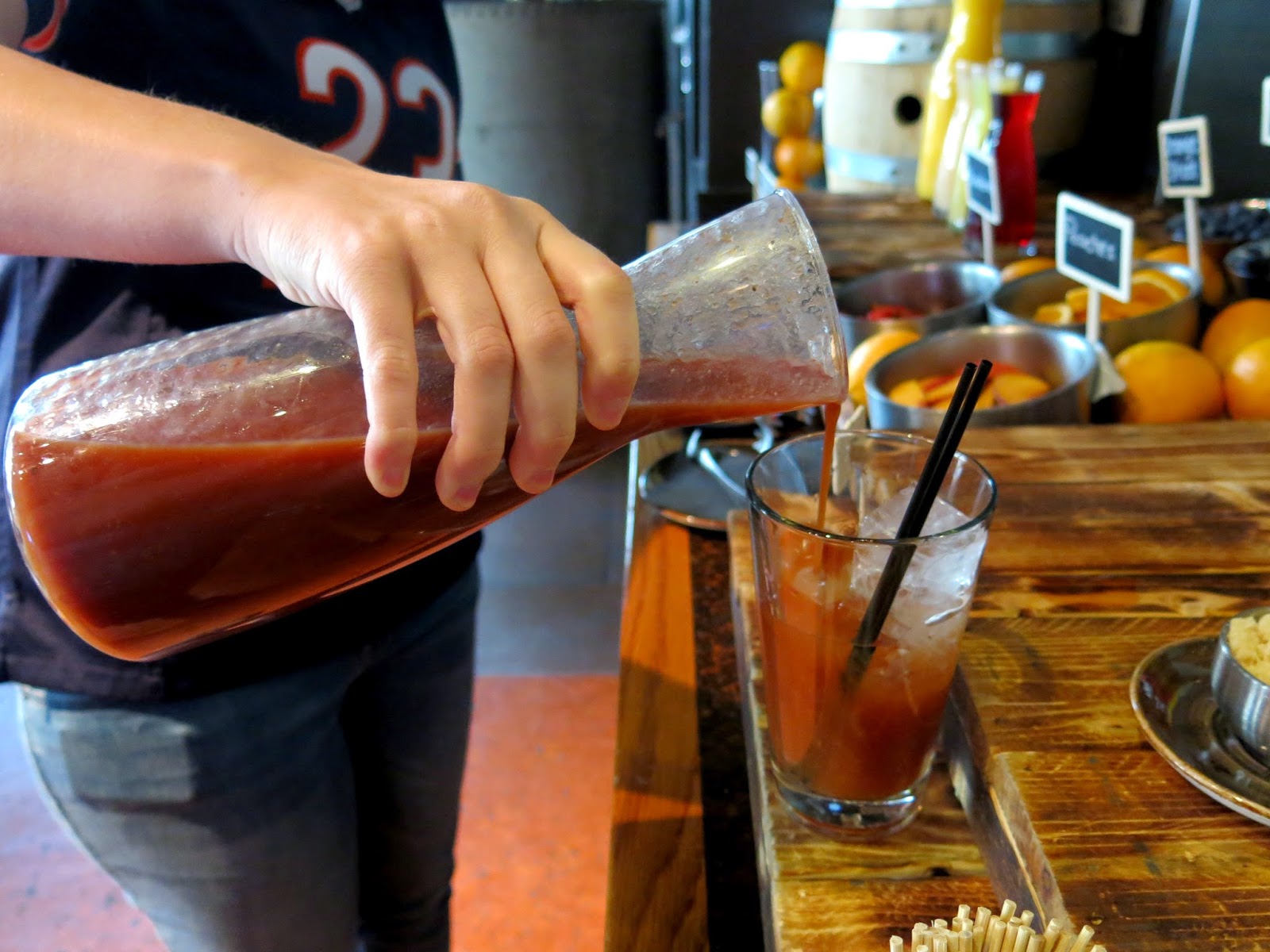 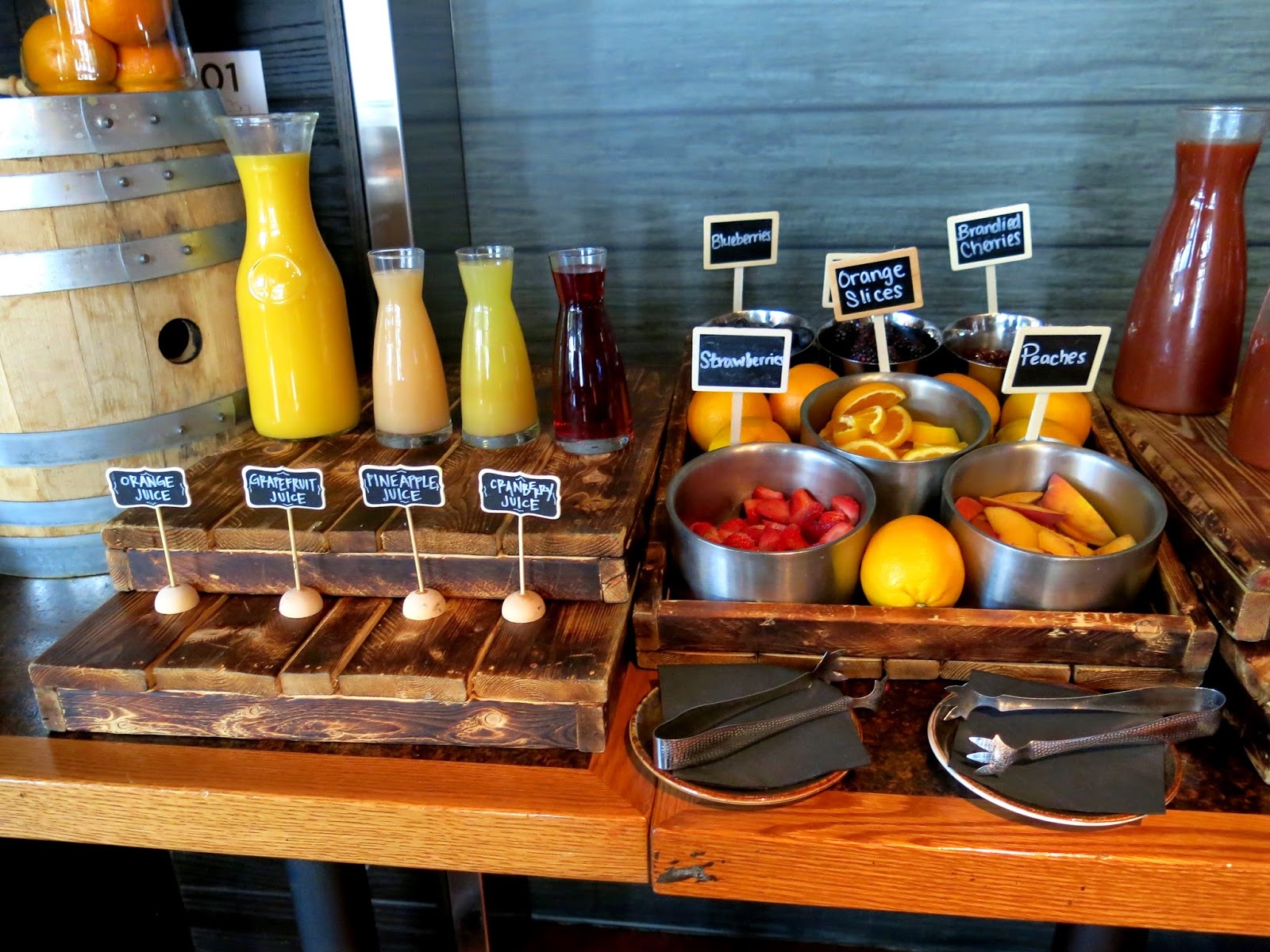 Brunch started with a visit to the bar, but this was no flagging down a bartender, leaning on the counter, and waving money around affair.  The bar they visited was the Make Your Own Bloody Mary and Mimosa Bar.  Bailey was handed a glass with ice and vodka, while Brandy was given a glass half full with champagne, and they were both directed to a spot coked full with mix ins, garnishes, and condiments.  Bailey was delighted to be able to pour her own portion of the house made Bloody Mary mix, sprinkle in the perfect amount of hot sauce, and create a custom skewer with olives, cheese curds, and even bacon.  Brandy, on the other hand, was given a choice of several fresh juices (she chose pineapple) and a veritable orchard of fruits, from which she chose peach slices and brandy soaked cherries.  As they bustled back and forth, picking their various drink accessories, a kindly manager informed them that come the colder weather, an eggnog bar was to be installed as well, with things like dulce de leche pearls and cinnamon sprinkles. 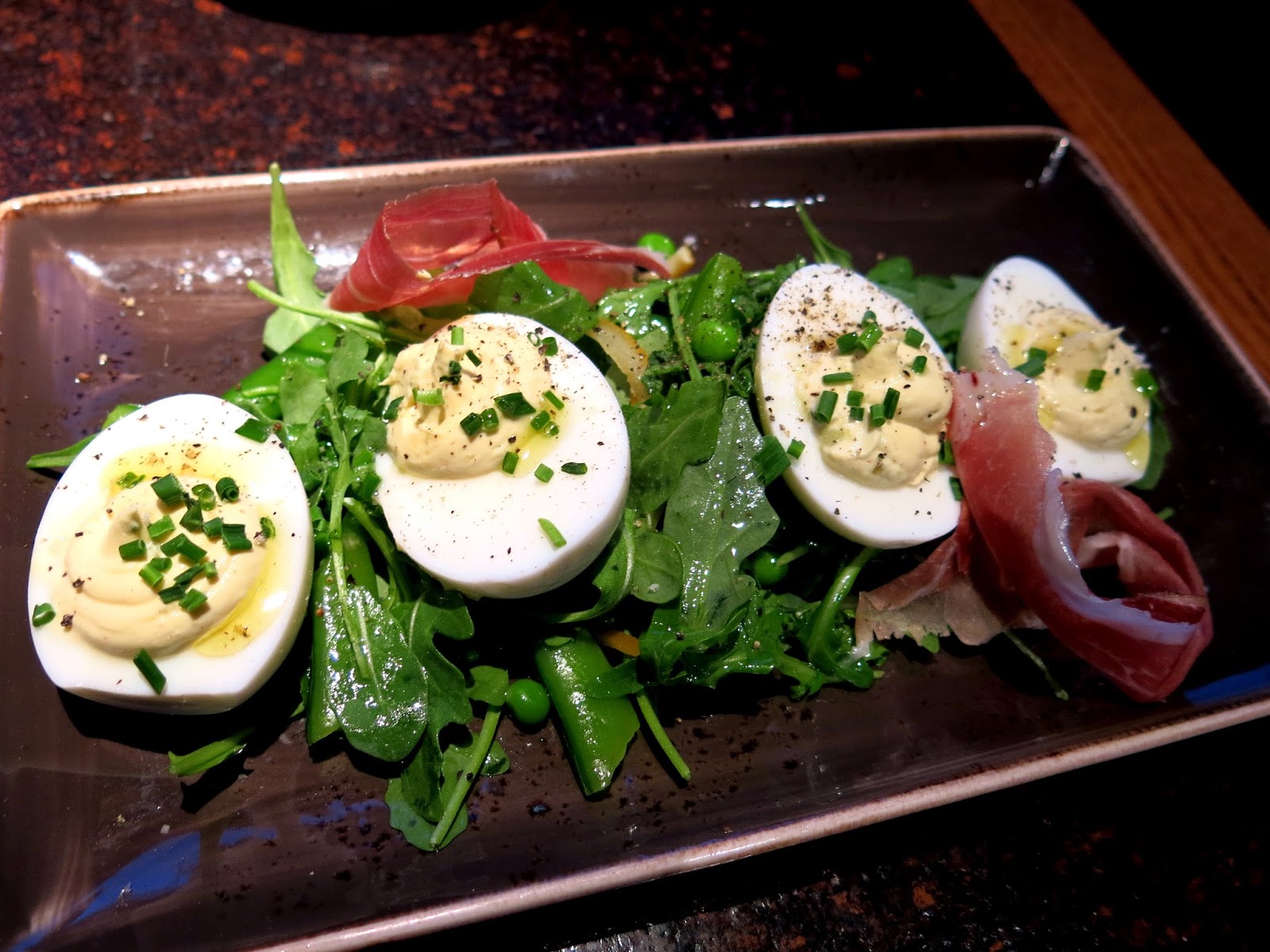 Once their drinks had been appropriately decorated and mixed, the ladies seated themselves once more and settled in for an appetizer of Deviled Eggs.  The eggs themselves were delicately soft and creamy and came served with a bright and slightly astringent salad of arugula, English peas, and Tamworth ham, dressed with meyer lemon.  While Brandy loved the eggs, she wasn't such a huge fan of salad, mainly because of her psychological aversion to lemon (it's a story so long we'd need to purchase a bigger Google storage plan to tell it), but Bailey rather enjoyed the contrast of the salty, prosciutto like ham and the acidic and peppery greens.  "They compliment each other like a kicker and a receiver," Bailey said happily.  Brandy starred blankly at her. 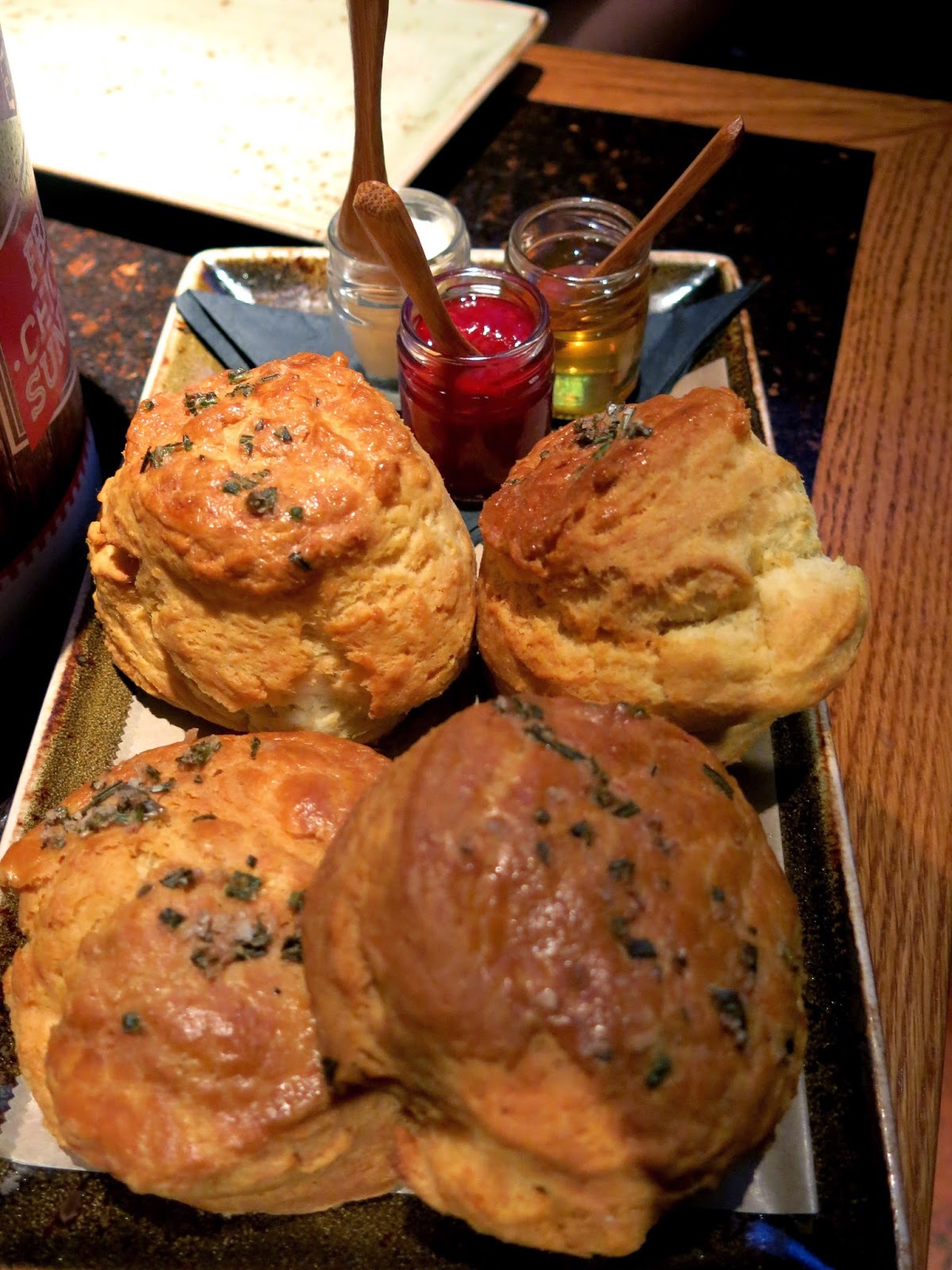 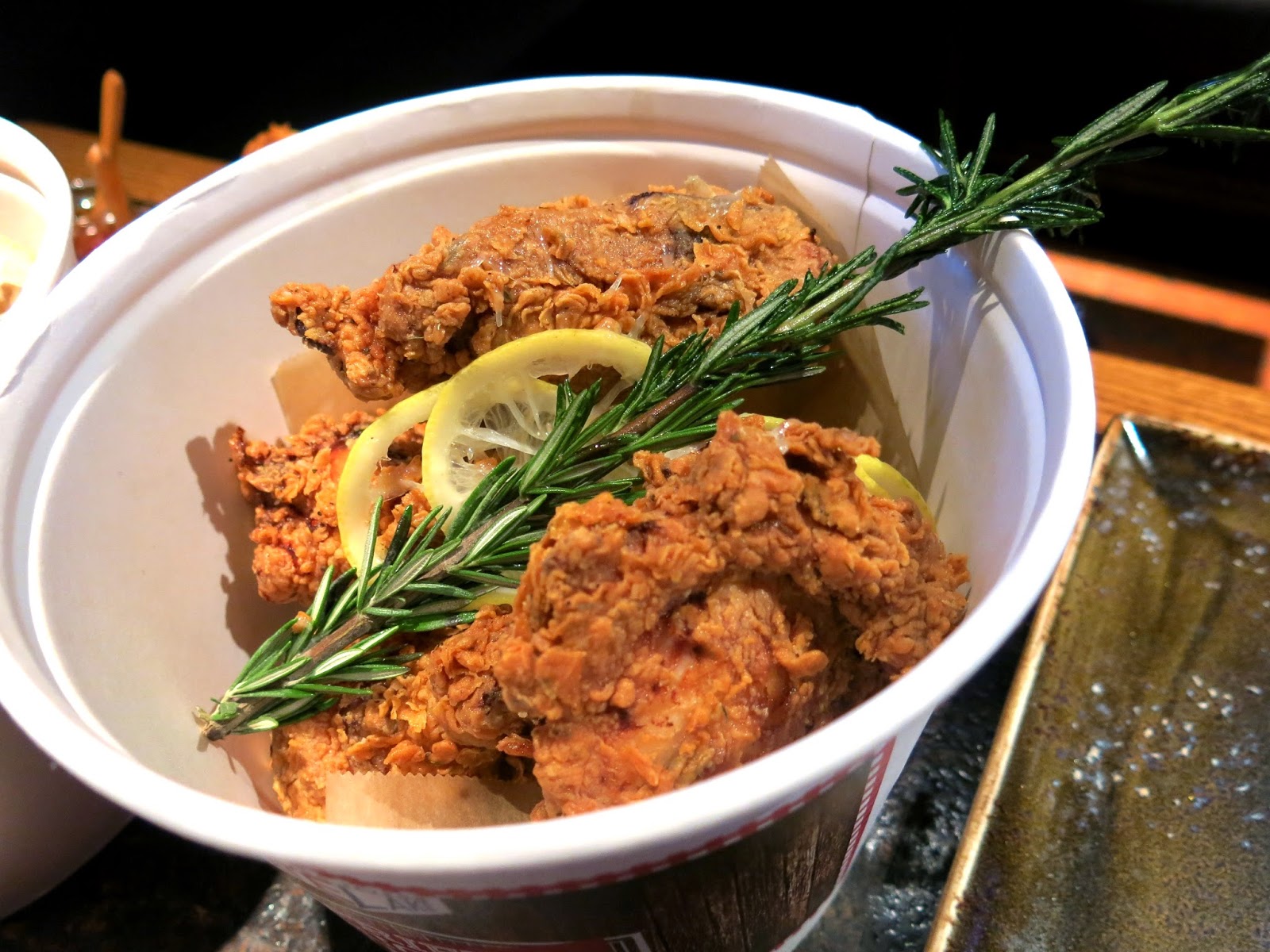 The main event of the day (other than the game) was the Fried Chicken.  A specialty of the house that's only served on Sundays, the chicken was marinated in a brine over night, twice coated in a cornmeal batter and fried, and served with huge, tender biscuits.  Brandy and Bailey put in a for a full order (which turned out to be two buckets of various pieces and 4 biscuits), figuring that would supply them with enough food to get through the game with.  The chicken's coating had an excellent crunch on the outside, but was extremely juicy and flavorful on the inside.  Bailey had the right idea of eating the chicken straight off the bone, while Brandy preferred to pry the meat from the bone with a knife and fork, which did mean that the coating slipped off more easily.  Both Bailey and Brandy felt the texture of the chicken was spot on and that the coating wasn't too dry or thick, but might have been a little on the salty side.  The biscuits were melt in your mouth perfection and came served warm with tiny pots of butter, honey, and raspberry jam. 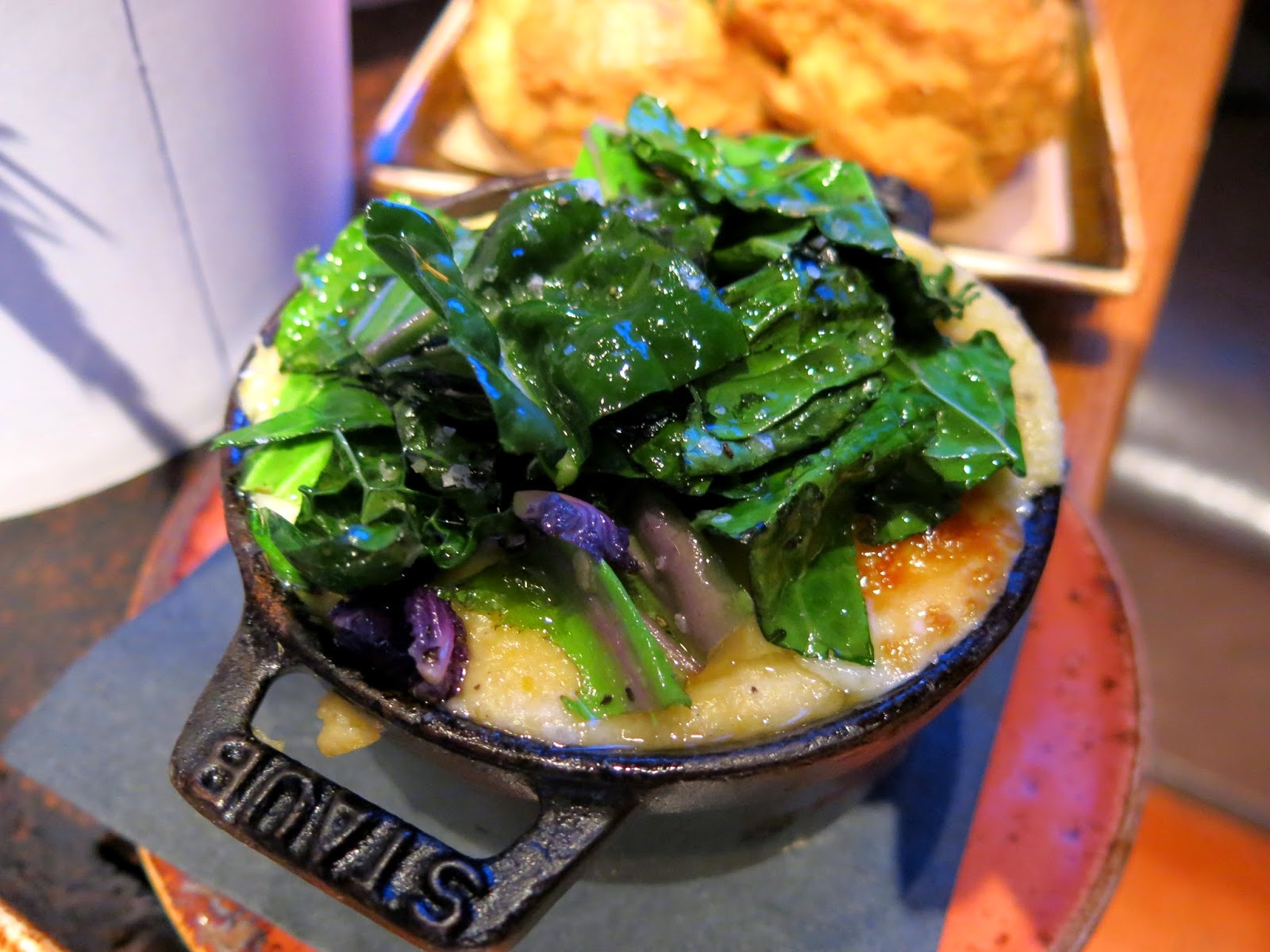 As a side dish, the ladies shared an order of Creamy Grits with wilted kale and parmesan cheese.  The grits were very smooth and light with a nice nuttiness from the cheese.  Brandy very much appreciated the addition of the kale, which added a bit of bitterness to break up the creaminess, though she almost reached for a little bit of the bacon in Bailey's skewer to dip into the pot. 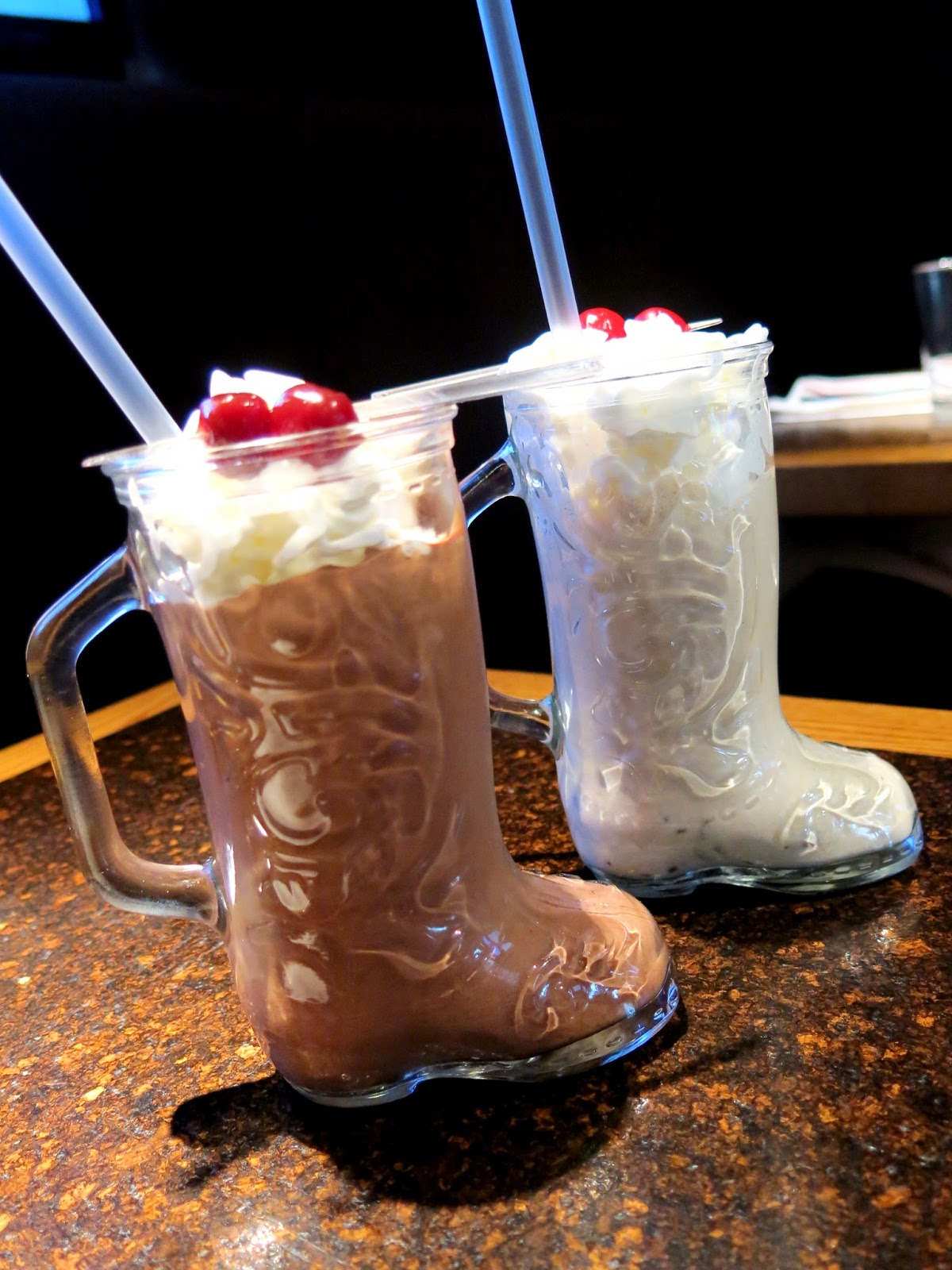 By the time the cheerful and informative waiter came to the table to inquire about dessert, Brandy and Bailey had stuffed themselves so full of chicken that they couldn't think of enduring another bite.  "But we must have something sweet!" Brandy proclaimed, "It's not brunch if we don't pair some sweet with the savory!"  "Well, there are some boozy milkshakes on the drinks menu," Bailey moaned.  "Done," said Brandy.  They ordered up two of the said shakes: the Devil in a Red Dress for Bailey, which consisted of coffee liquor, dark chocolate ice cream, hot sauce, and sea salt, and the Live Till you Die for Brandy, which was a mix of whiskey, brown sugar caramel ice cream, and pecans, both of which came served in rather adorable cowboy boot shaped glasses.  While Bailey's shake was maybe a little more subtle and tasted like a frozen mocha, Brandy's defintly had a boozy kick that greeted the drinker with each swallow.  "This is certainly not something you'd want teenagers sipping at the soda counter!" Brandy proclaimed, attempting to figure out just how to get the pecans from the bottom of the glass into her mouth.

As the game approached half time, Brandy and Bailey settled up their bill to free up the table and relocated to the bar to finish out the game.  The service at State and Lake was impeccable: informative, friendly, and quick without being intrusive.  The food was definitely on the high side of quality, as reflected in the not terribly outrageous prices (the full order of chicken including the biscuits, for instance, came out to $30) and the extra little touches in presentation were certainly appreciated.  "So will you consider watching a few more games with me this season?" Bailey asked during a time out.  "Perhaps," Brandy mused, "Of course, if you ply me with ice cream, booze, and fried food, I'm liable to do whatever you want me to do." 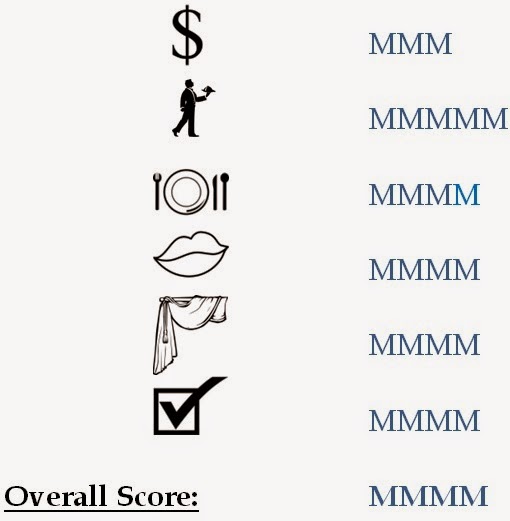