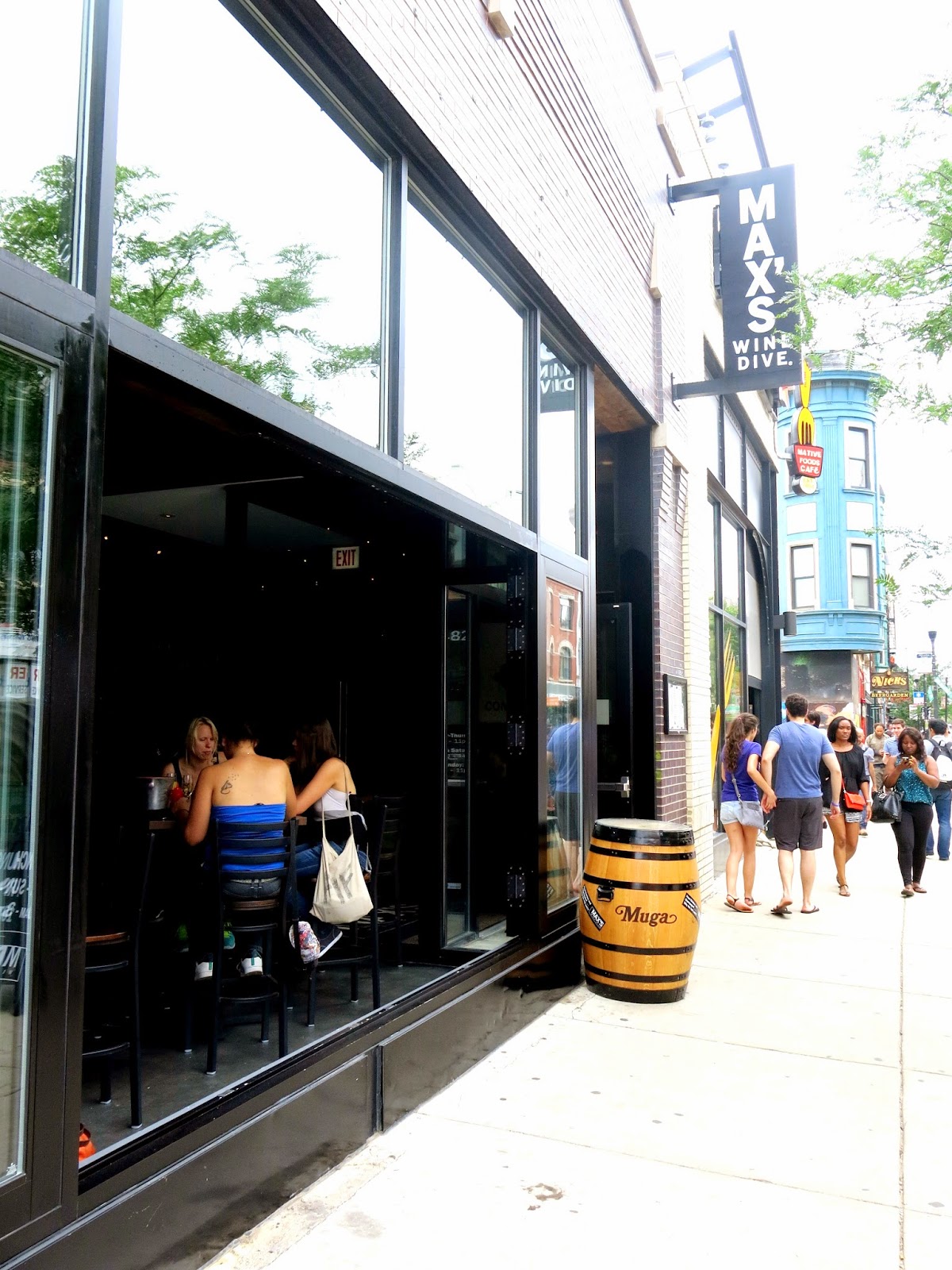 Now that this little blog is nearing it's fourth year of existence, it's not a surprise to anyone to say that Brandy has eaten quite a lot of brunch.  "I don't call myself an expert lightly," as Brandy likes to say, "But if there's anyone in this city whose seen more pancakes, mimosas, or benedicts, I'd like to meet them.  And commiserate with them."  It is perhaps this very odd set of food expertise that has made Brandy a sought after guest at some of the finest establishments in Chicago who wish to have their brunches ranked among her favorites.

Recently, Brandy was contacted by a new comer to the national pub scene (and more specifically, the Chicago brunch scene), Max's Wine Dive in Wicker Park, who have launched their full brunch service of classic dishes, created by their fearless head chef,  Jessica Brumleve.  Brandy enlisted the help of her friend Bernais Bamboo (a cheerful Sunday school teacher who prefers to brunch on Saturdays, for obvious reasons), as she had previously expressed an interest in studying Brandy's methods of brunch deduction.  "It takes a lot to surprise me these days," Brandy told her, sagely, "Which is why I tend towards the original and creative.  But if a classic dish is prepared well, I won't be turning my nose up at it.  You wouldn't believe the amount of squishy French toast, over done eggs, and watery cocktails I've had in these many years, so as long as it's done right, I'll tip my cap to it." 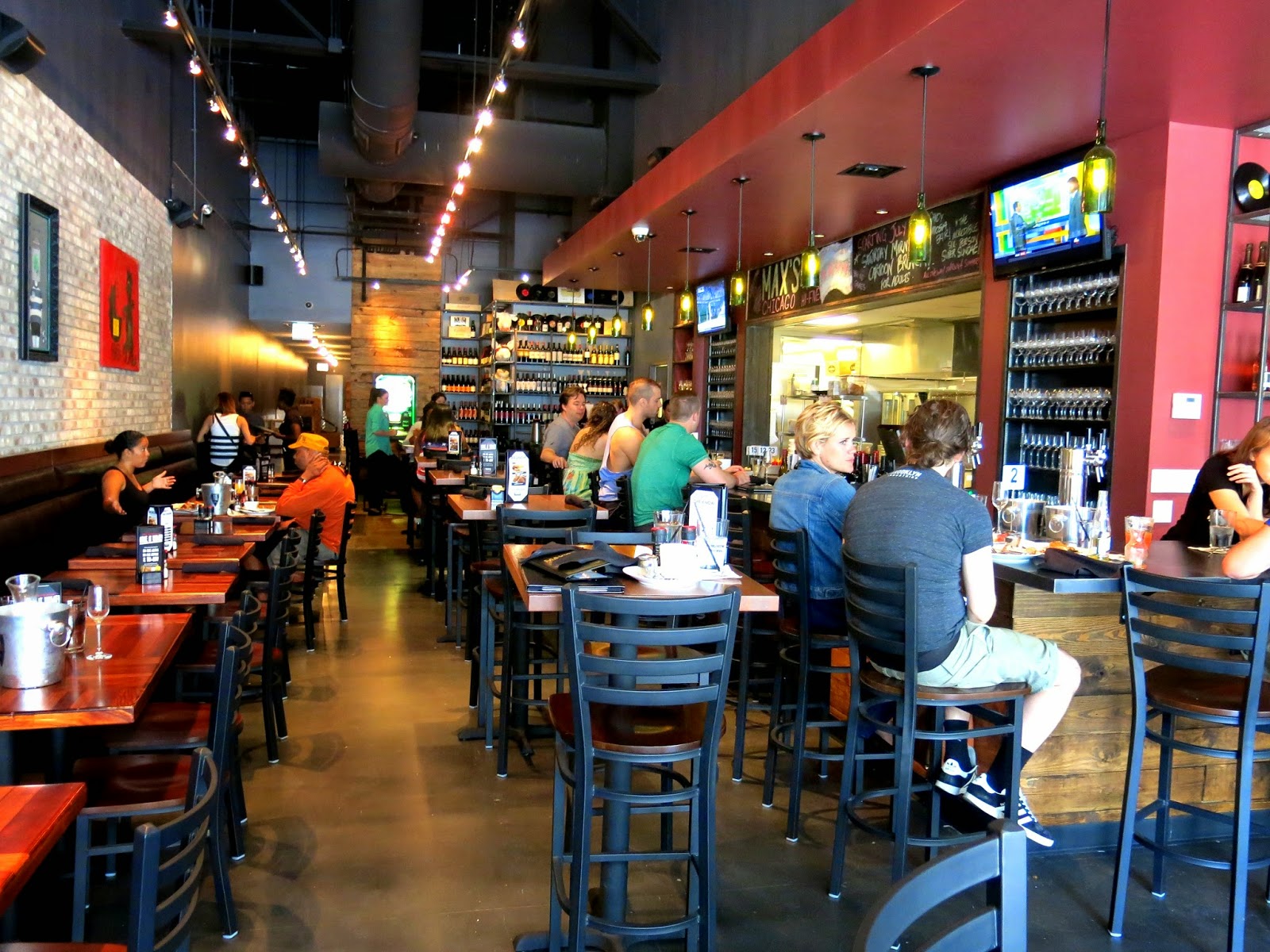 Even the outside of Max's gave off a strategic rusticness with the placement of barrel beside the matte black doorway.  Just inside was a wall hung with classic rock album covers, which matched the selection of music playing to the narrow, but sunny dining area.  Brandy and Bernais were taken to their seats straight away by a smiling and chatty hostess, who presented them with the menus, which, unusually, contained both the wine list and the food.  "The philosophy behind Max's is the pairing of good wine with comfort food, which makes the drinks less intimidating and the cuisine elevated," the hostess told them.  "Well, as it's brunch, I can think of no better pairing with our food than a mimosa," Brandy said cheerfully.  The hostess smiled.  "Of course!  Orange or grapefruit juice?" she asked.  Brandy raised a knowing eyebrow.  "Well played," she said, nodding, "Grapefruit, if you please."  "Orange for me," Bernais grinned cheerily. 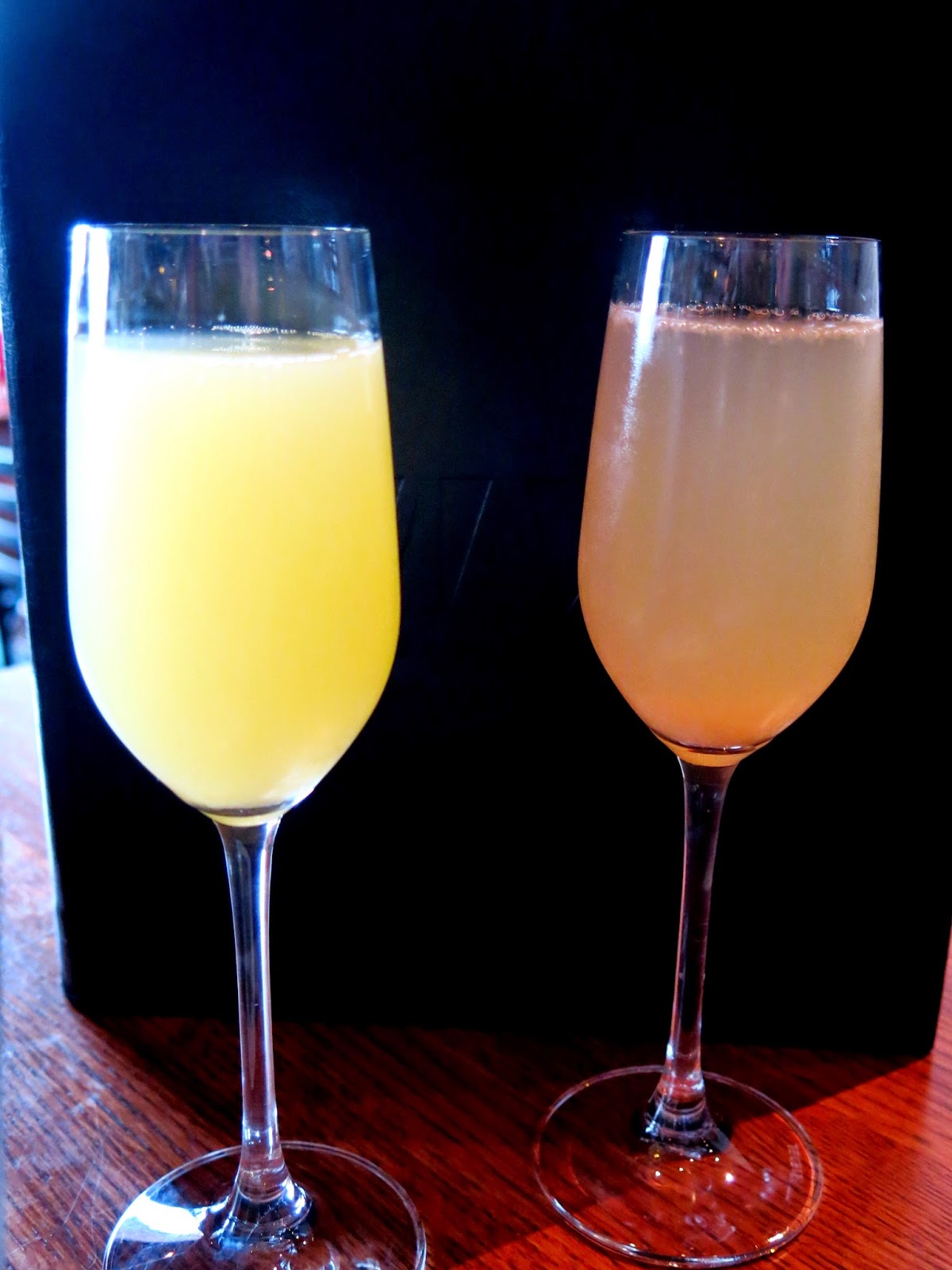 The mimosas were pretty typical, but done perfectly, with a nice quality of champagne that wasn't hidden under the fresh and vibrant juice.  Brandy noted with approval that the menu actually gave the diner a choice of bubbly to have in their morning drink.  "I like the option to make my mimosa more or less posh," she told Bernais, "No more guessing as to whether the drink you've ordered is really worth the price.  It's right there in black and white."  Bernais scribbled notes into a paper pad as Brandy spoke. 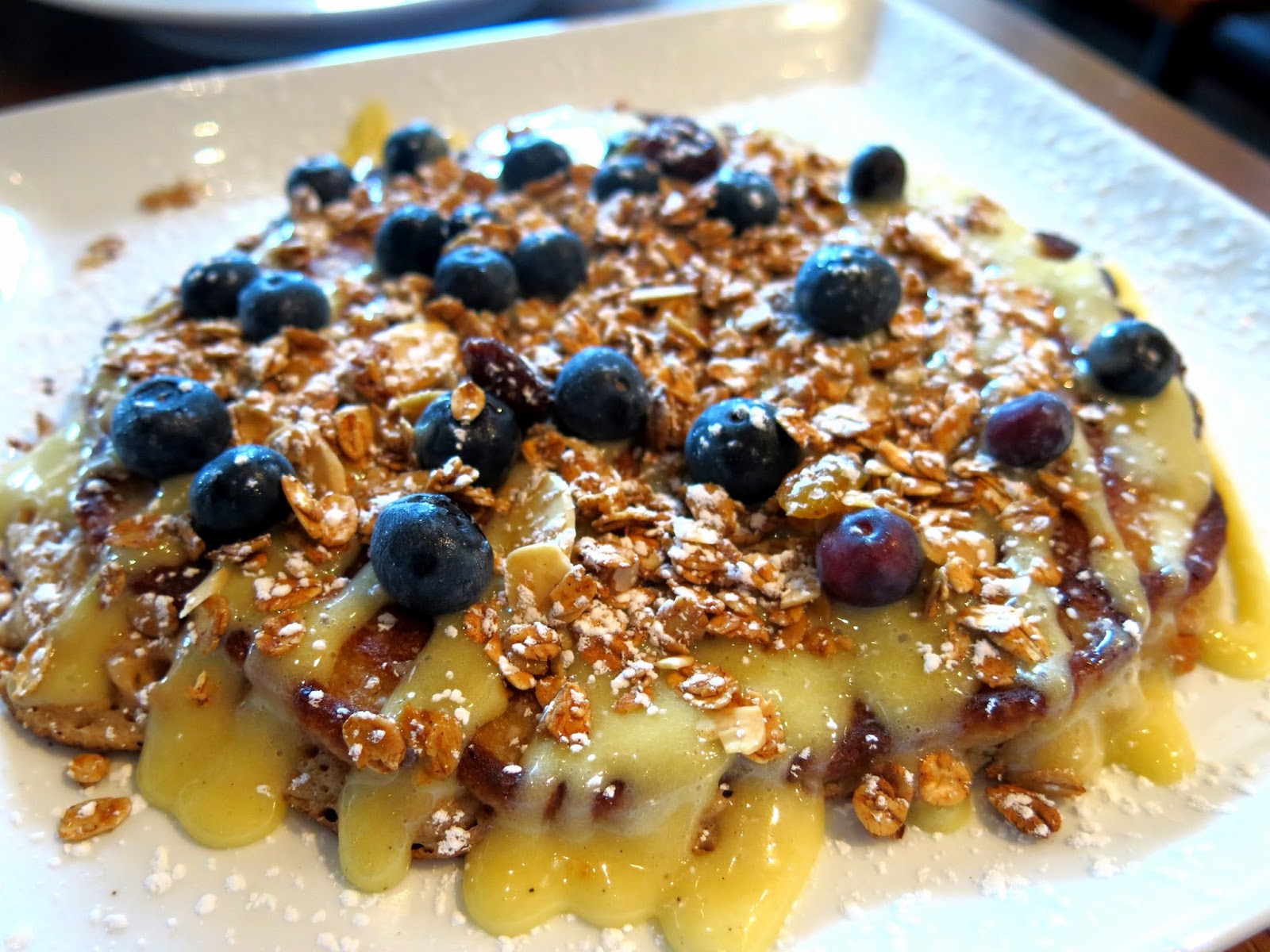 Then the barrage of dishes began to appear.  First up was the Whole Wheat Blueberry Pancakes, which came topped with fresh berries, almond granola, and a drizzle of lemon curd.  The pancake was a bit on the denser side, but the crunchy granola on top kept each mouth full fresh and exciting.  "I find a whole plate of pancakes can sometimes be a little too boring after the first few bites," Brandy said thoughtfully, "But this little bit of texture on top eliminates that kind of problem."  Bernais appreciated the brightness that the lemon curd added and that not only were there blueberries on top, but also inside the pancake.  "They're like little blue bits of happiness!" she giggled.  Brandy surreptitiously moved Bernais's mimosa farther away from her reach. Next up was the Vanilla Bean French Toast, a thick slice of Texas Toast which was topped with macerated strawberries and a pure maple syrup.  This was another dish that was pretty standard, but done right, with the tart strawberries cutting through the richness of the thick buttery bread and complimenting the creamy vanilla flavor. 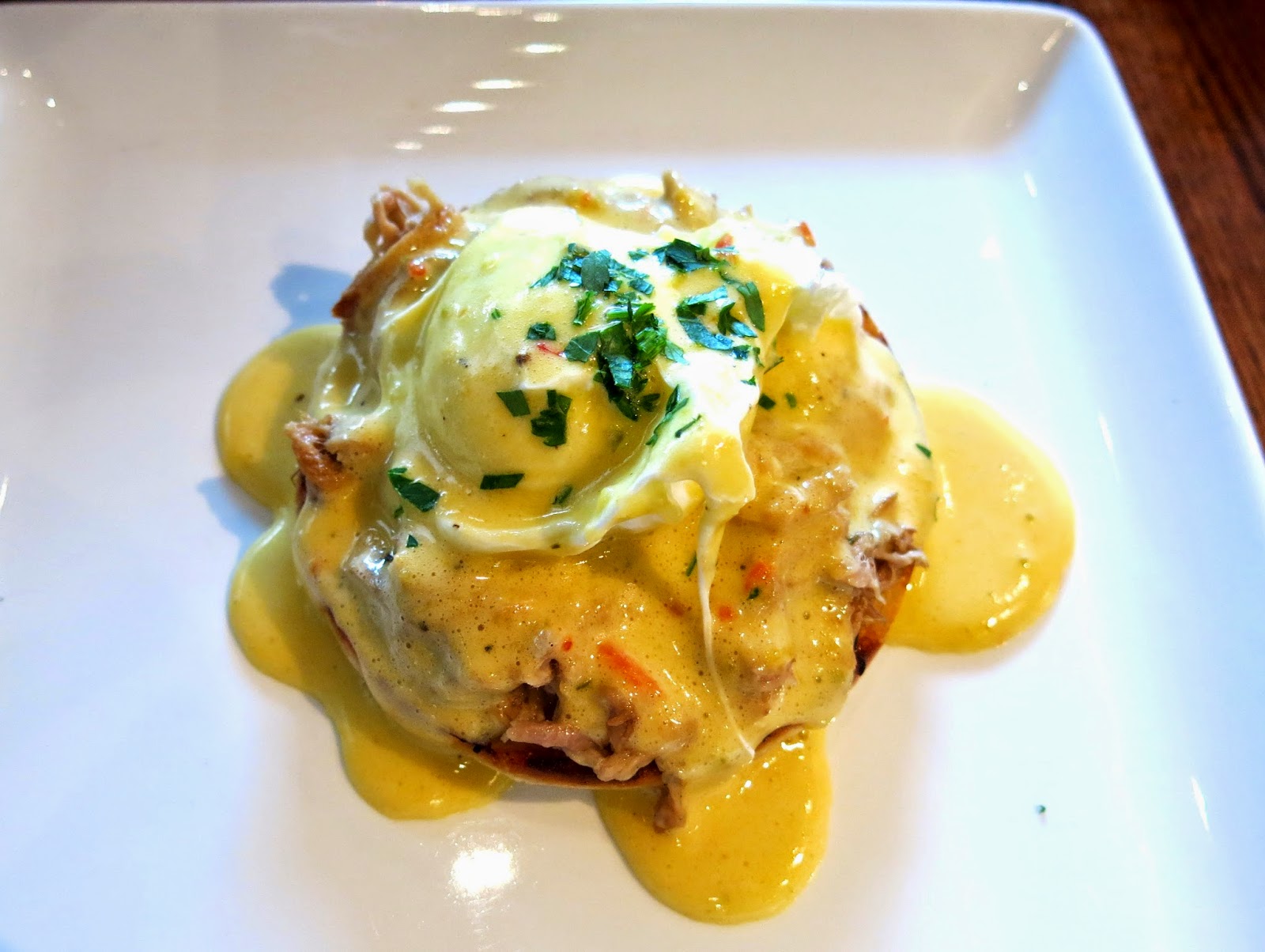 The savory dishes started next with the Pork Belly Benedict, which came topped with a giardiniera hollandaise, something Brandy was pretty impressed by.  "In all the eggs benedicts I've seen here in Chicago, I've never come across a giardinera hollandaise, and now that I think about it, I can't believe no one else has done it!" she exclaimed.  Tucking into the dish, both Brandy and Bernais found they absolutely loved the tangy, vinagared flavor of the sauce, but also the lean and tender pork belly, which had been shredded.  Even the basic English muffin that served as the base was perfect, in that it's slight toastiness formed a sturdy yet pliable pedestal on which to carve a masterpiece. 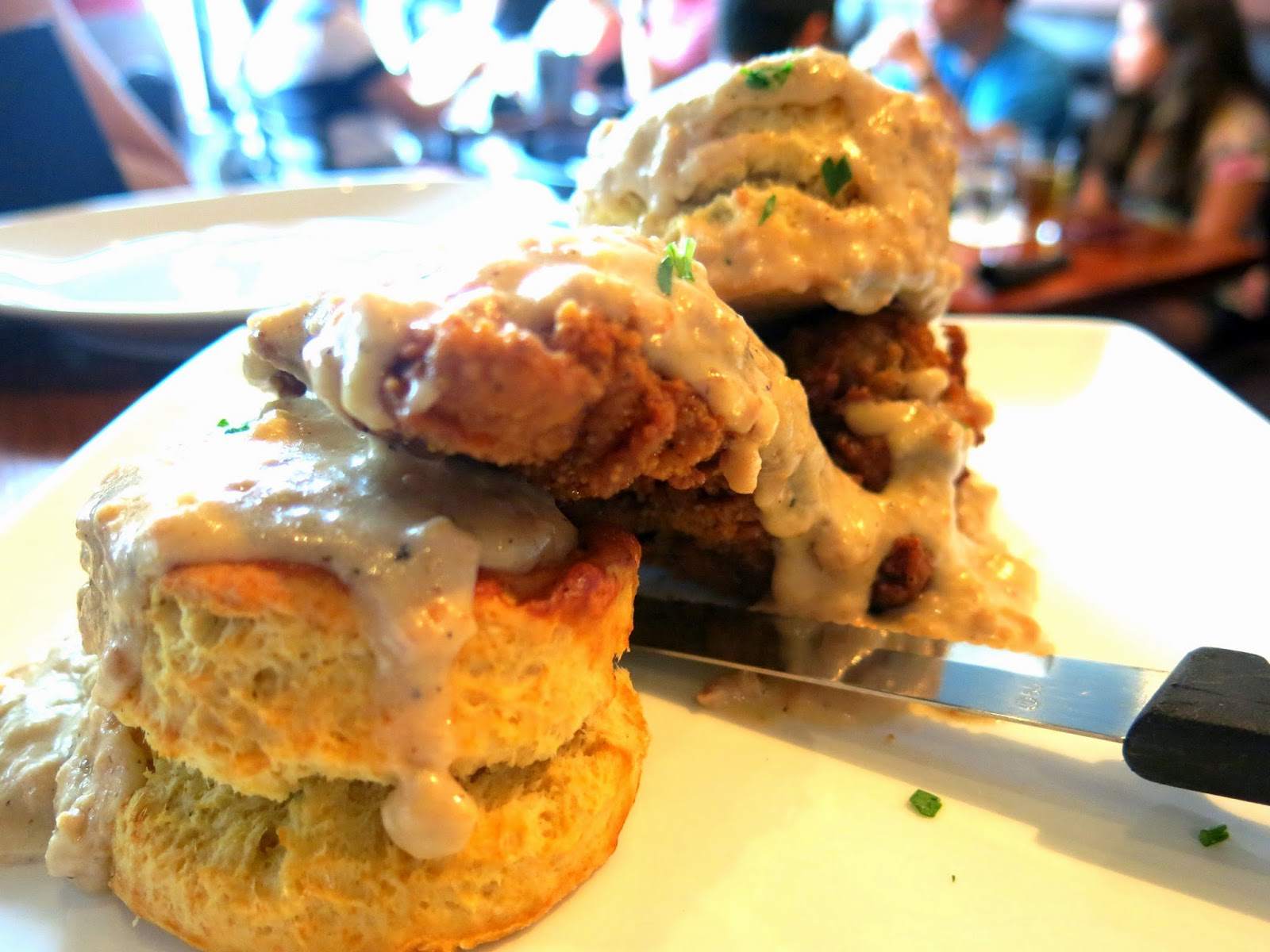 Following that was the Biscuits and Gravy, which buried the headline a bit, as the center piece of the dish was a chicken fried flat iron steak.  The buttermilk biscuits were tender, but dense, with an almost cheesey flavor, while the gravy was nicely spiced with a hint of fennel from the sausage.  The steak, while tender, was a bit too thin for its thick coating, and got a bit overshadowed by the tasty, crunchy batter.  "It's so yummy, but I can't help feeling it's like a bride being upstaged by her maid of honor," Bernais said, and Brandy quite agreed with her. For the final course ("Thank goodness!" Brandy breathed, "I'm so full of food I'm ready to make myself a little too comfortable here and lie down for a bit!"), a server presented them with a plate of Max's signature Fried Chicken with collard greens, home fries, and another thick slice of Texas toast.  Brandy and Bernais first split the giant breast, which proved to be incredibly juicy on the inside.  Here, the thick layer of batter, which had a bit of a kick to it from some added jalapenos, was much better served, proving to be a compliment rather than a cover for the protein, and the side of chipotle honey, which the menu listed as optional, was a definite must in Brandy's opinion because of it's smokiness.  The bed of greens beneath the chicken had a pungent tanginess to them, which both helped to center the decedent chicken, but also added a good punch of flavor to the otherwise subtle potatoes.

"So what did you think?" Bernais asked as the two ladies waddled away from the restaurant, "Was it worthy of your approval?"  Brandy gave a slow nod.  "The food was classic and satisfying with some very nice original touches," Brandy stated matter of factly, "And sometimes even I tire of invention for invention's sake.  There are a fair few establishments in this town that would rather put something insane on a plate without first making sure that it's tasty, but this spot is not one of them.  This is a place that knows its brunch classics and only improves upon them when they feel they've mastered the basics."  "But I heard one of the ladies that worked there say something about a Saturday Cartoon Brunch.  She said they would be serving bacon stuffed pancakes and cereal topped pancakes and pizza bagels and gigantic sundaes.  That sounds pretty creative to me!"  Brandy stopped in her tracks.  "When is that happening?" she asked.  Bernais blinked, confused.  "Saturday the 12th, I think."  A moment latter, Brandy was marching back towards Max's in order to make her reservation for the following weekend. 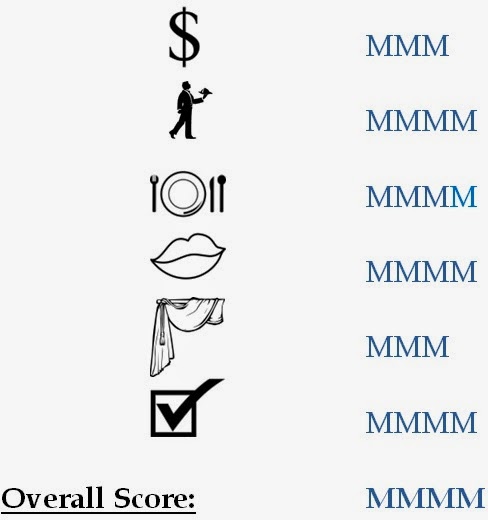