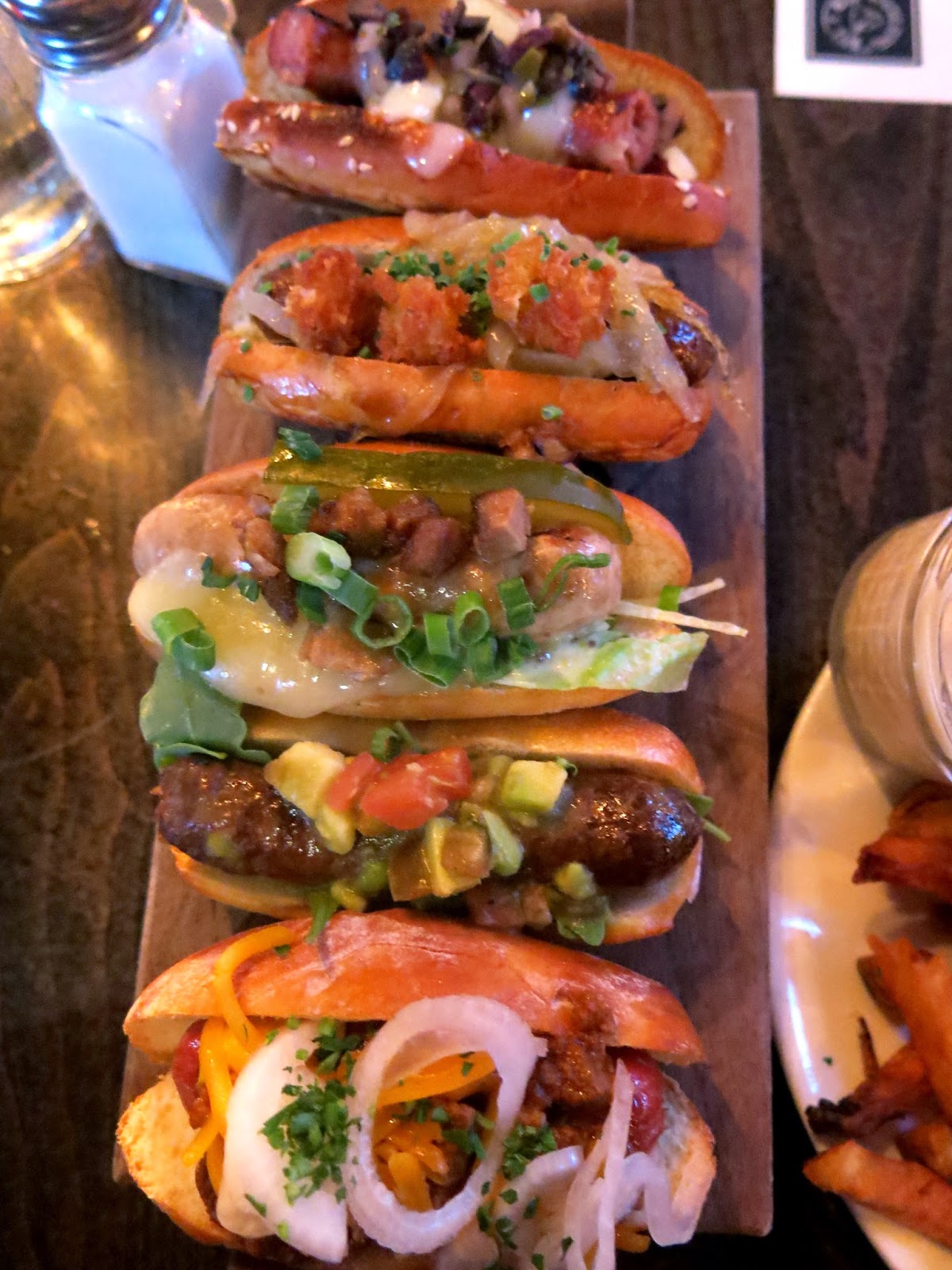 "It's time," said Brandy through the phone to Bailey.  "I understand," Bailey responded solemnly, "When does the operation commence?"  "Monday the 21st," said Brandy.  Then they both hung up and synchronized their calendars, for they knew what was on the line.  It was Hot Dog Week at Bull & Bear.

As you loyal readers may remember, last year Brandy and Bailey braved their way through Bull & Bear's infamous Frank Plank, thoroughly testing each of the 5 dog concoctions before declaring their own personal favorites.  As they were more than up to the challenge last year, there was no question they would be putting their expert palates to the test once again this year (for the benefit of our readers, of course) in scrutinizing a new crop of inventive red hots. 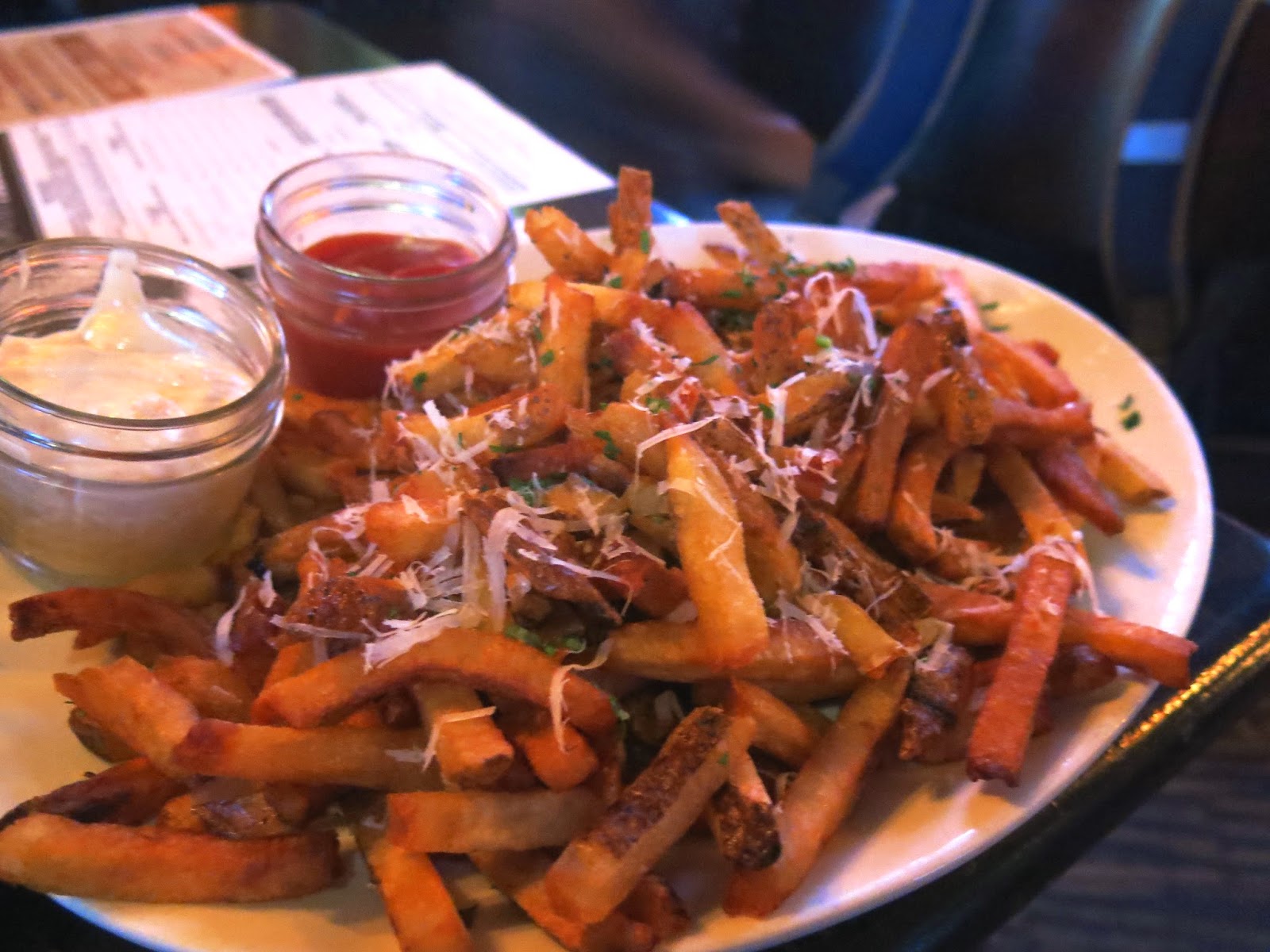 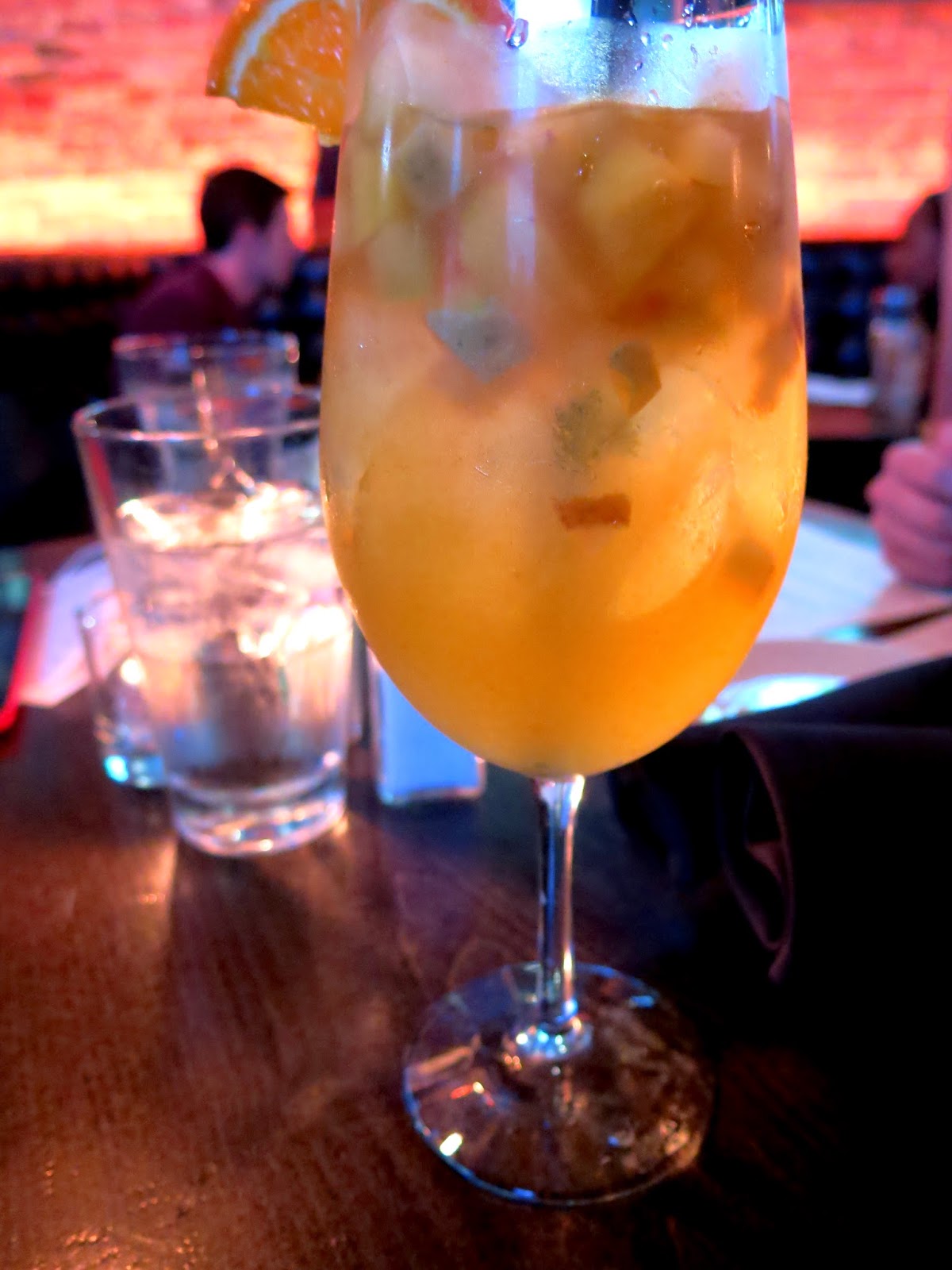 Where as last year's theme was Chicago neighborhoods, this year the dogs were decked out in honor of five different US locations: New Orleans, Miami, California, Wisconsin, and Cincinnati.  But before diving into their Frank Planks (a sampler plate featuring mini versions of all 5 dogs), the ladies ordered up some white sangria to cool off from the humidity, and a plate of truffle fries, which were so delicious that there nearly weren't any left to accompany the dogs when they arrived. 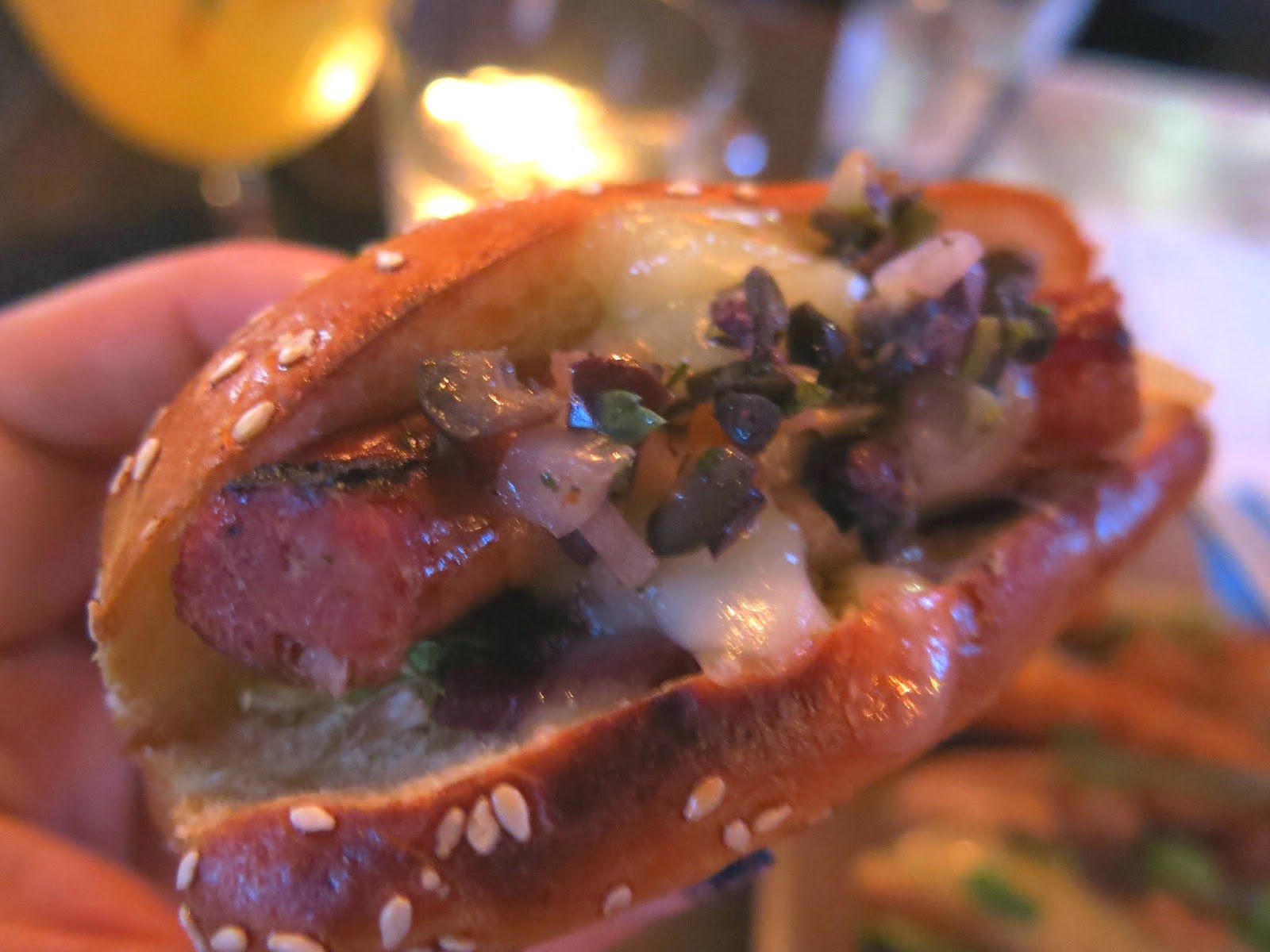 First up was the New Orleans Po Boy, an andouille sausage topped with olives, provolone cheese, and served on a sesame seed bun.  The sausage was not nearly as spicy as Brandy expected it to be, but it still had a good dose of beefy flavor, and the toasty flavor of the bun really helped to set it off. 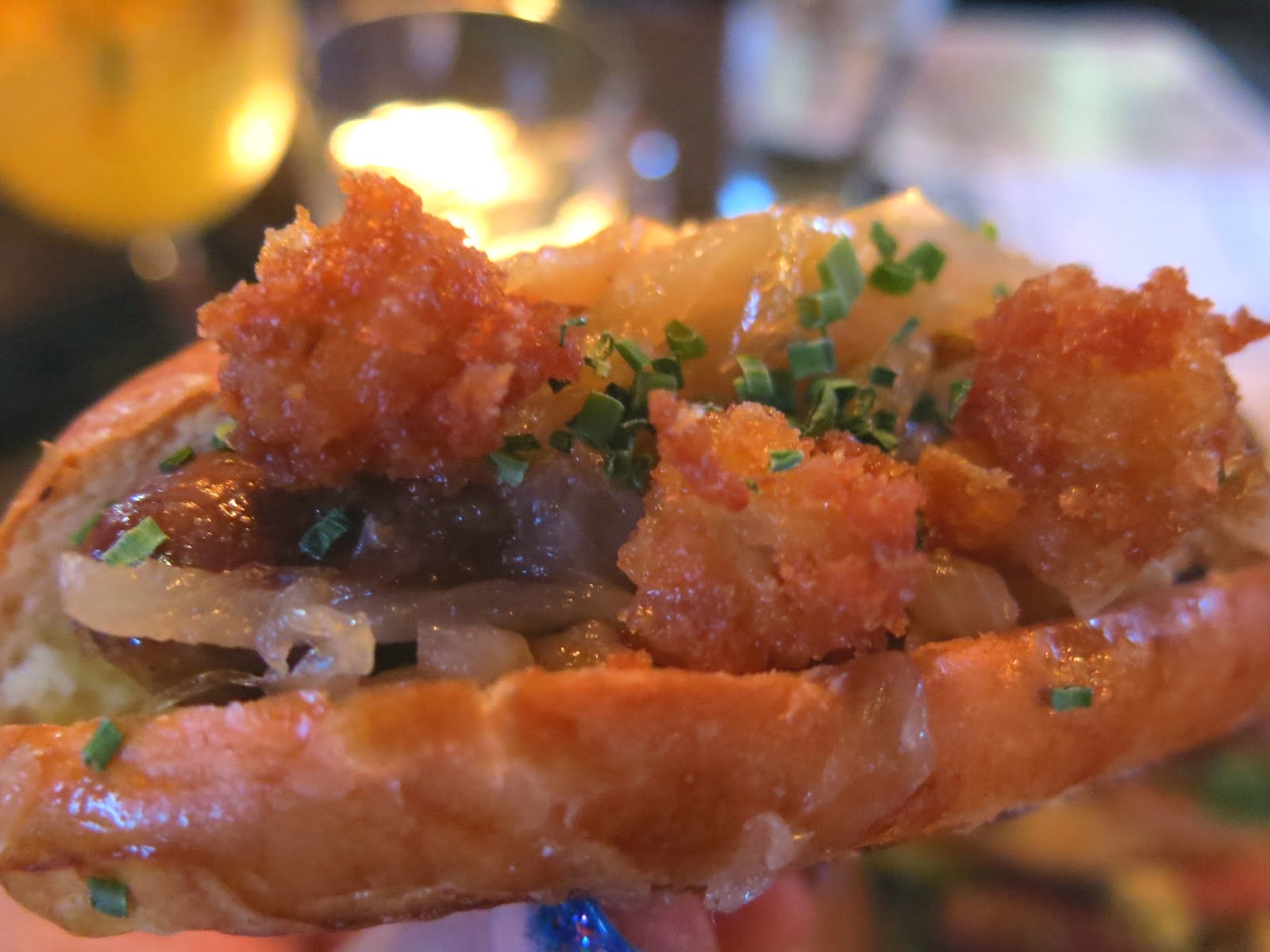 Next came the North Woods of Wisconsin, a venison dog with mustard, caramelized onions, and fried cheese curds.  This was probably the one dog Brandy was looking forward to the most, and it did not disappoint.  The sweetness of the onions was a nice contrast to the gamy meat, and the mustard gave a good hit of sourness.  The cheese curds on top were really fun texturally, but in the smaller version of the dog that came on the Frank Plank, they didn't add the kind of melty goodness Brandy was hoping for. 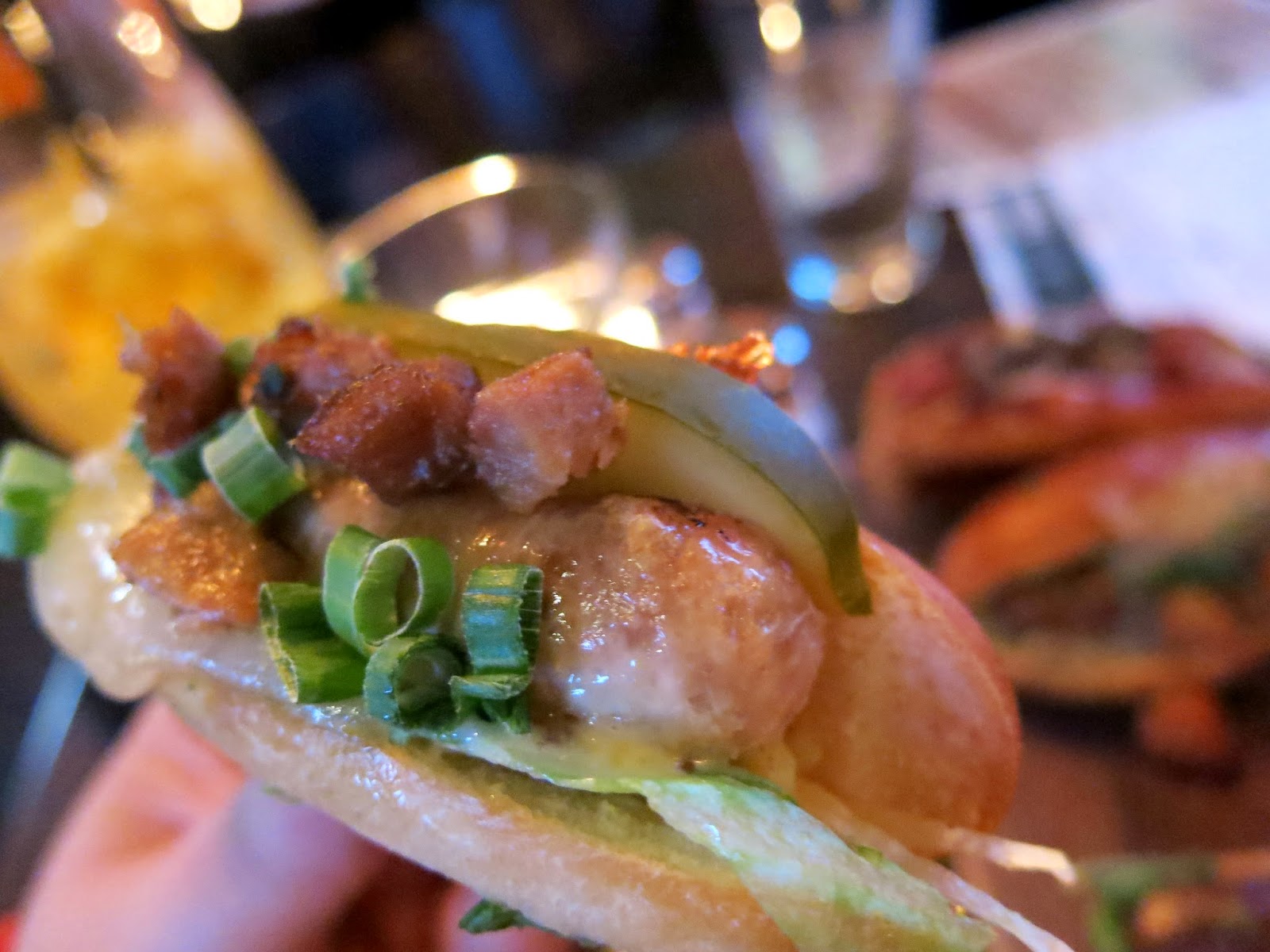 After that came the Miami Vice, which consisted of a turkey dog topped with braised pork, Swiss cheese, and a pickle.  This was probably both Brandy and Bailey's least favorite of the bunch, not because it was terrible, but because in comparison to the other four, it seemed a little bland.  The pickle provided a nice bite of sweet and sour, but other than that, there just wasn't a whole lot of flavor or texture to this puppy. 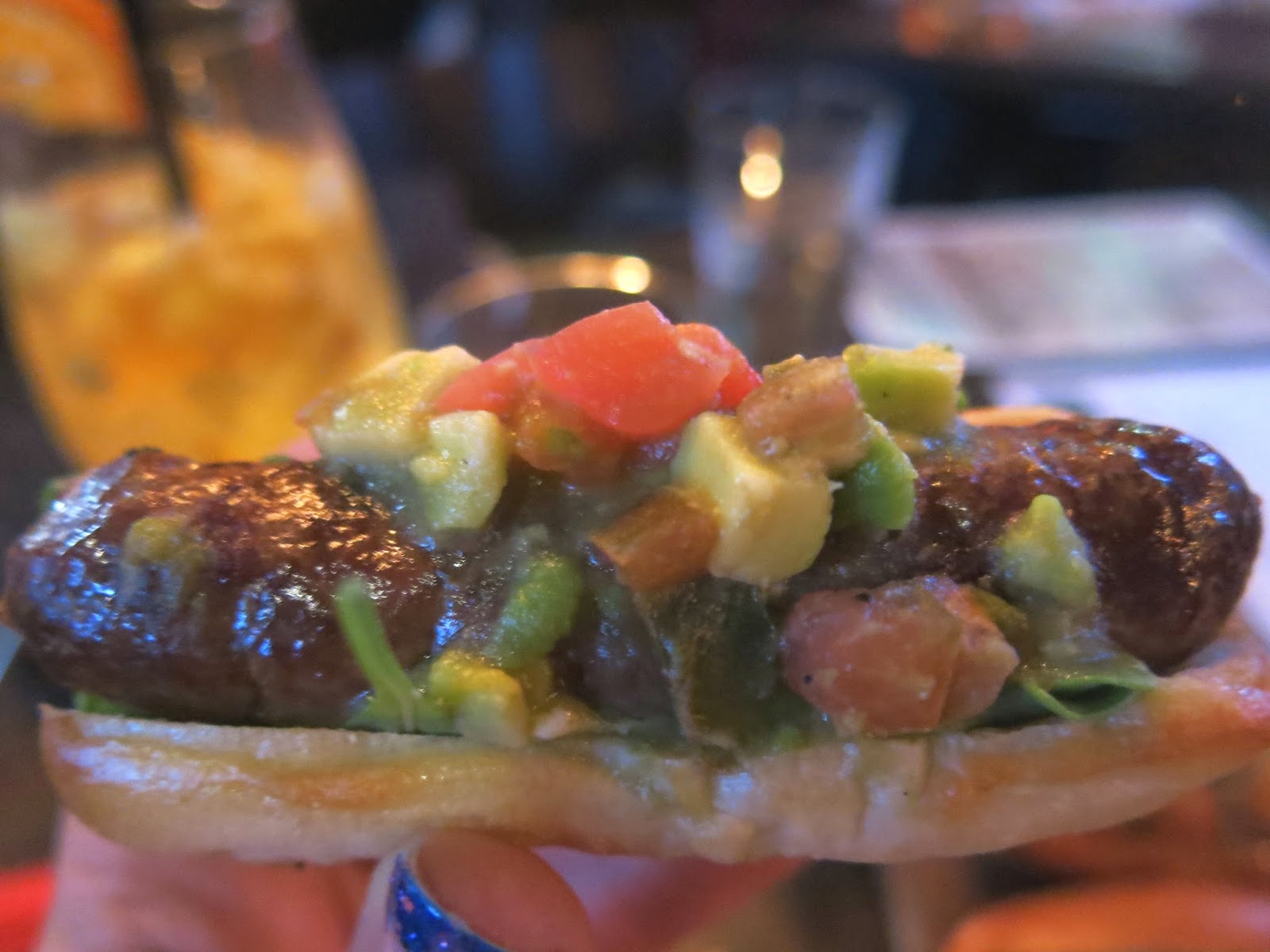 Following that came the Sooo Cali, a bison dog on a ciabatta style bun with avocado, tomato, and a pesto aioli.  This was the one Bailey had looked forward too, as it's list of fresh ingredients, she thought, would make for a lighter, more refreshing hot dog.  The bison dog was probably the most flavorful sausage of the bunch, though it was a little dry (which is to be expected from such a lean meat), but the toppings did put on in mind of a summer day on a California beach. 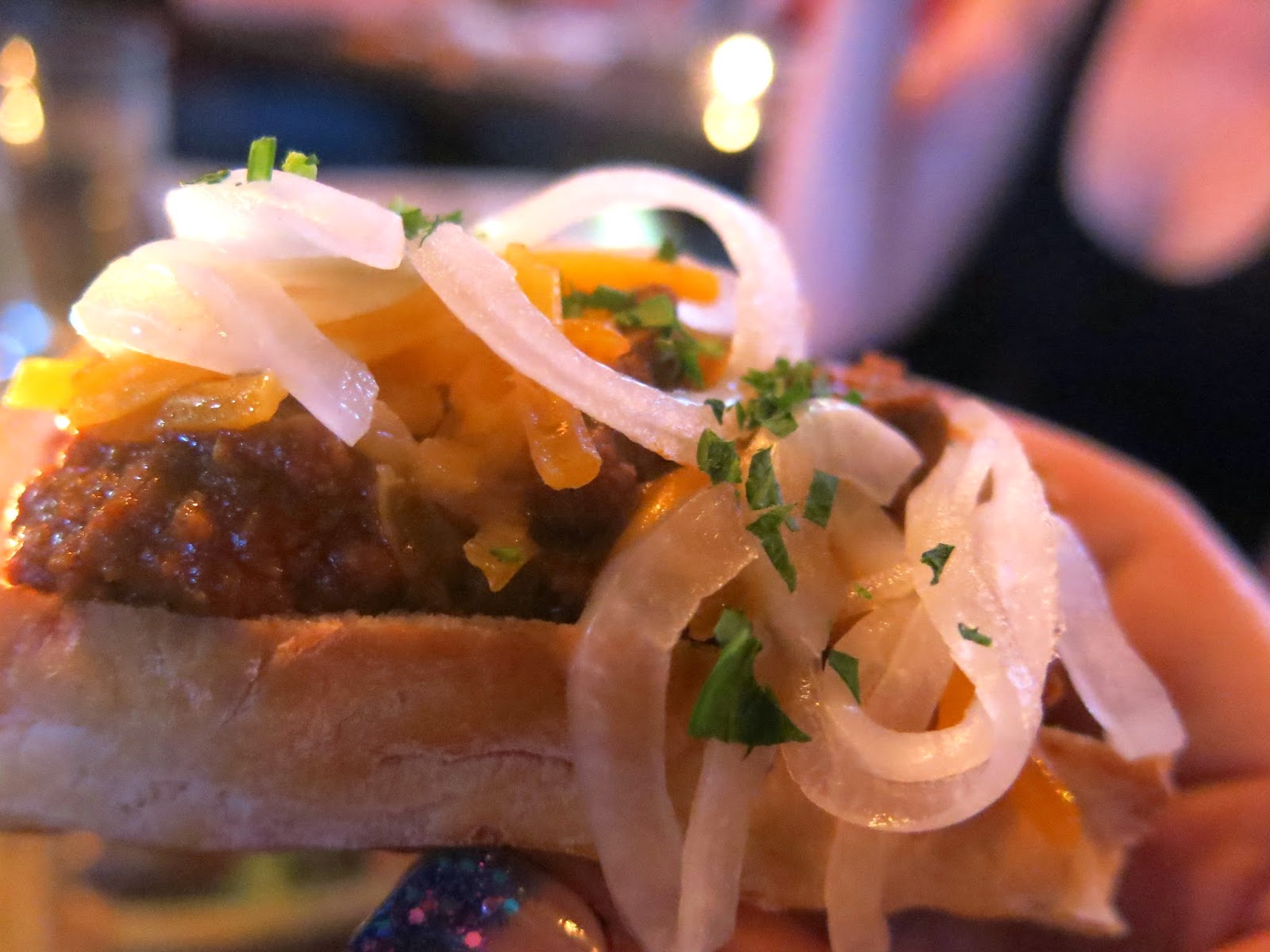 Lastly was the Cincinnati Coney, which came topped with a beef chili, cheddar cheese, and pickled onions.  Brandy, who is not a Midwestern native, was not aware that Cincinnati was so famous for its chili, which Bailey seemed to think was highly amusing.  This dog was perhaps the most traditional, but also the juiciest and most well balanced.  The chili had a nice level of spice, and the onions lent a bit of a bite to counteract the richness of the other ingredients. 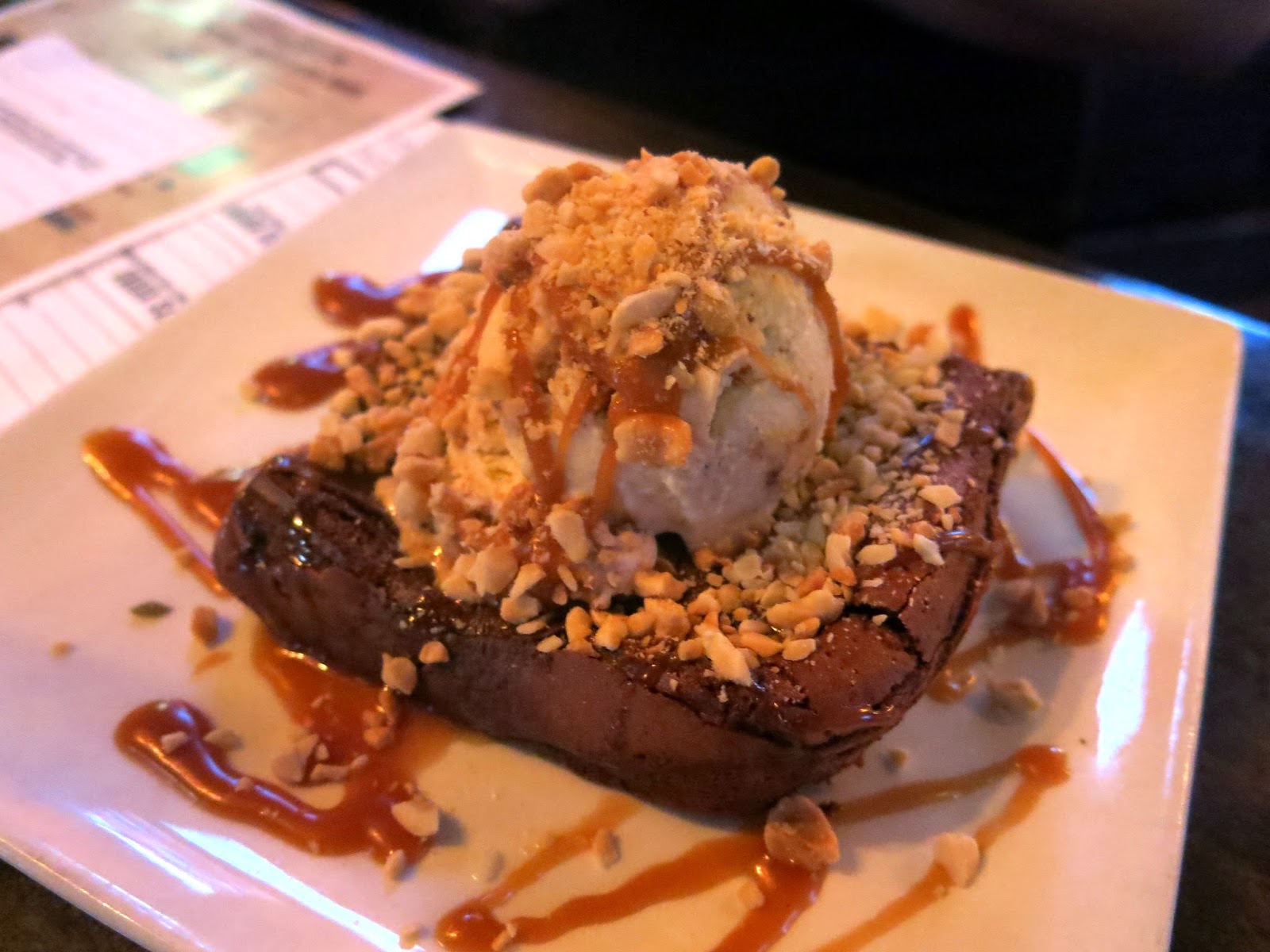 Finishing off their meal, Brandy and Bailey split a divine creation called simply Chocolate Torte, which turned out to be the most decedent sort of brownie, topped with caramel ice cream, salted caramel sauce, and peanuts.  The texture of the torte itself was some where between a pudding and angel food cake, an impossible state of matter that seemed suspended between viscous liquid and airy solid.  "They should study this thing in a laboratory!" Brandy exclaimed, "I'm fairly sure this shouldn't exist.  But I'm glad it does!"
Hot Dog Week at Bull & Bear carries on through the 27th with one of each of the hot dogs being offered in full size each day, as well as the Frank Plank sampler and the Homewrecker Challenge Dog (a 22 inch Chicago style dog served with a pound and a half of fries) served every day.  The most popular dog from this year's crop will be added to the fall menu.  Brandy and Bailey both had the same ranking of their favorites: 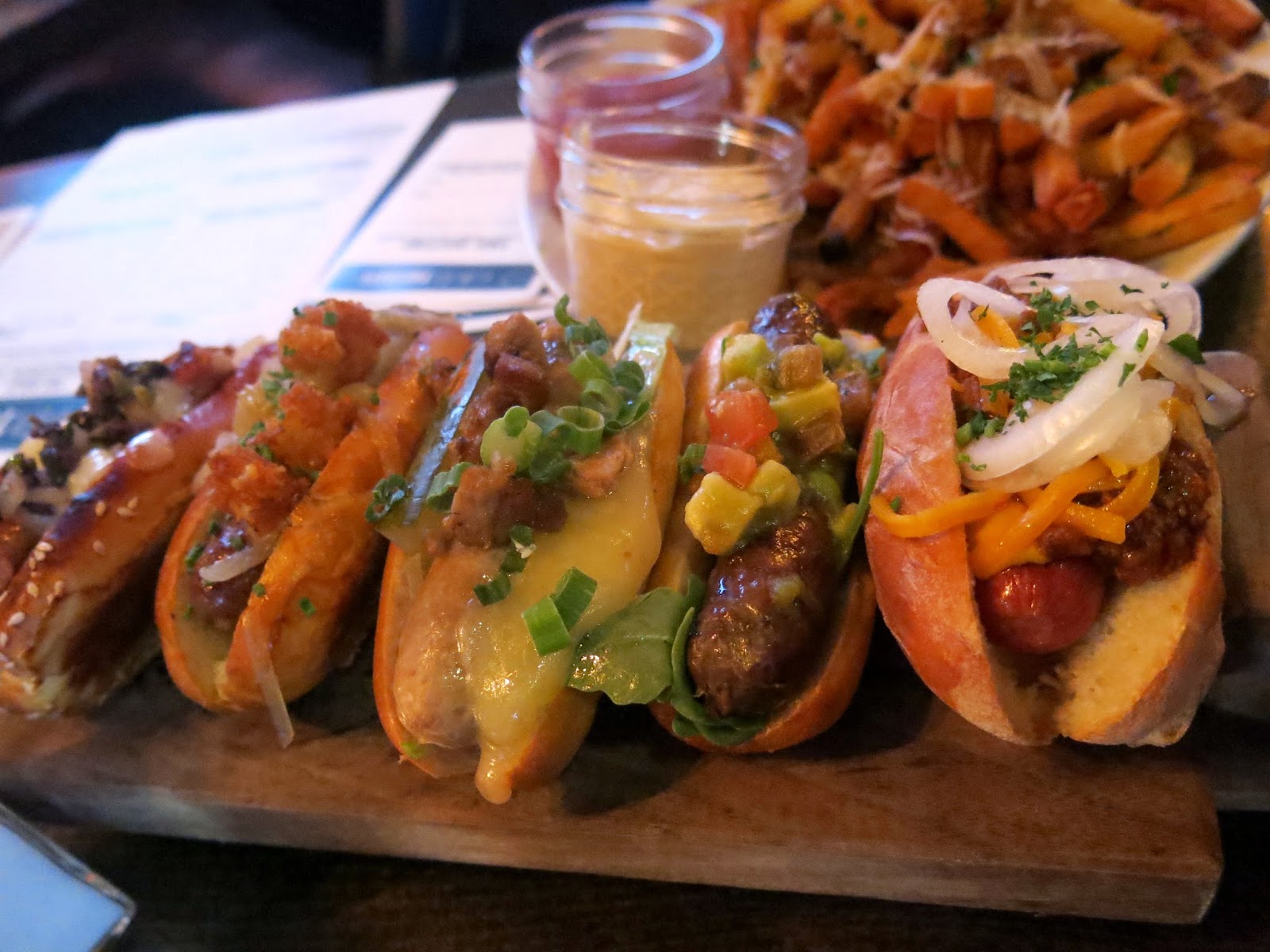 If you, dear readers, decide to visit Bull & Bear for Hot Dog Week, be sure to let us know your favorites by using the tag #RankYourFrank!