Festival Report: Taste of Chicago and Olive Oils from Spain 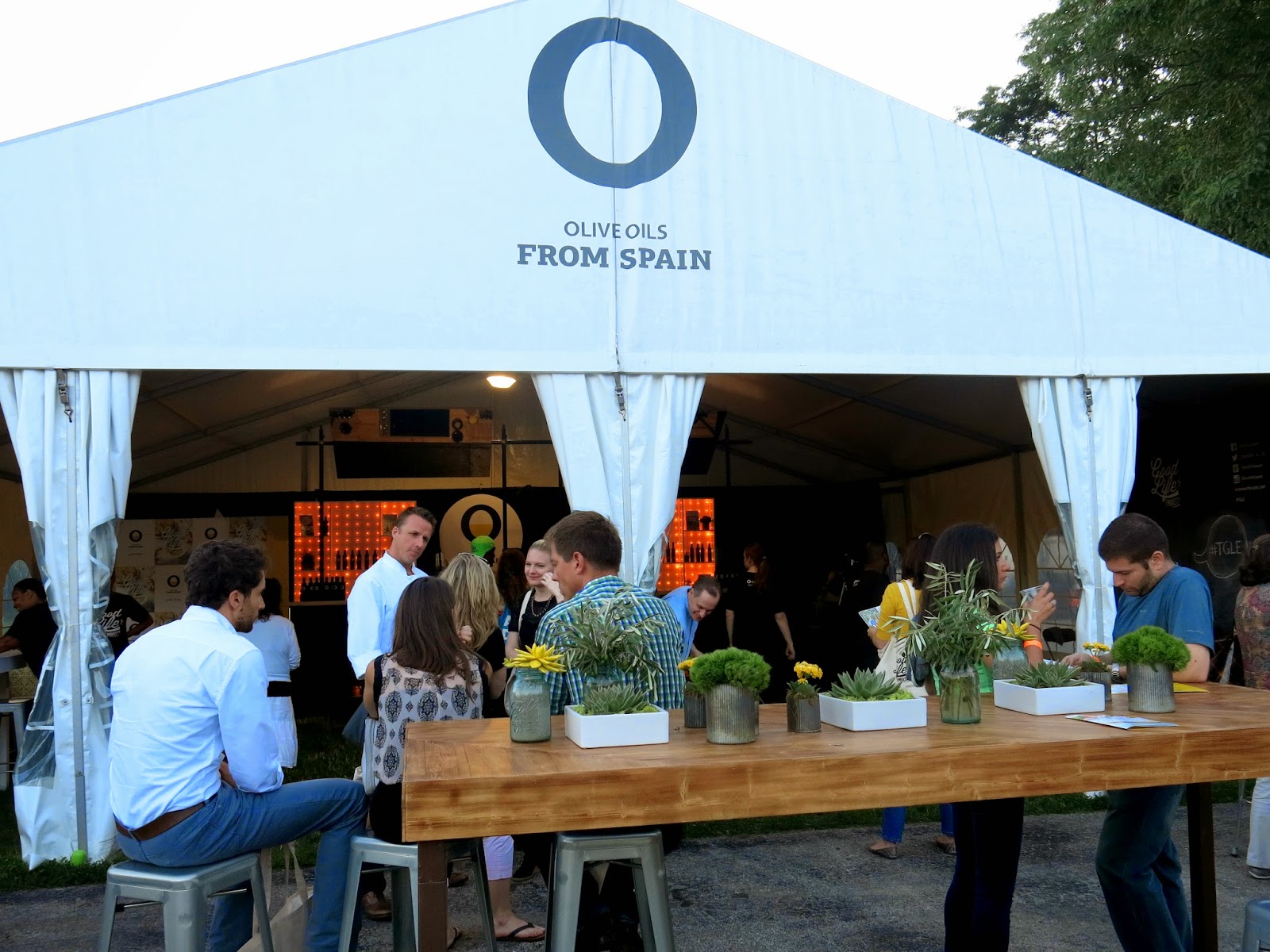 As keen eyed readers of this blog will note, last week was the annual Taste of Chicago Festival, and though rains might have dampened the spirits a little on Saturday, there was one very special tent that was new to the festival this year that had Brandy all a twitter (literally, she was tweeting up a storm!); The Good Life Embassy Presents Olive Oils from Spain.  This beautiful little space was providing not only a comfy lounge for tasters to rest up in, but also a charging station for phones, a photo booth, and expert demos performed by none other than one of Spain's premiere chefs, Diego Guerrero, and Benchmark Restaurants' Mark Murphy, who may be recognizable to food fans as one of the more intimidating judges on Food Network's Chopped. 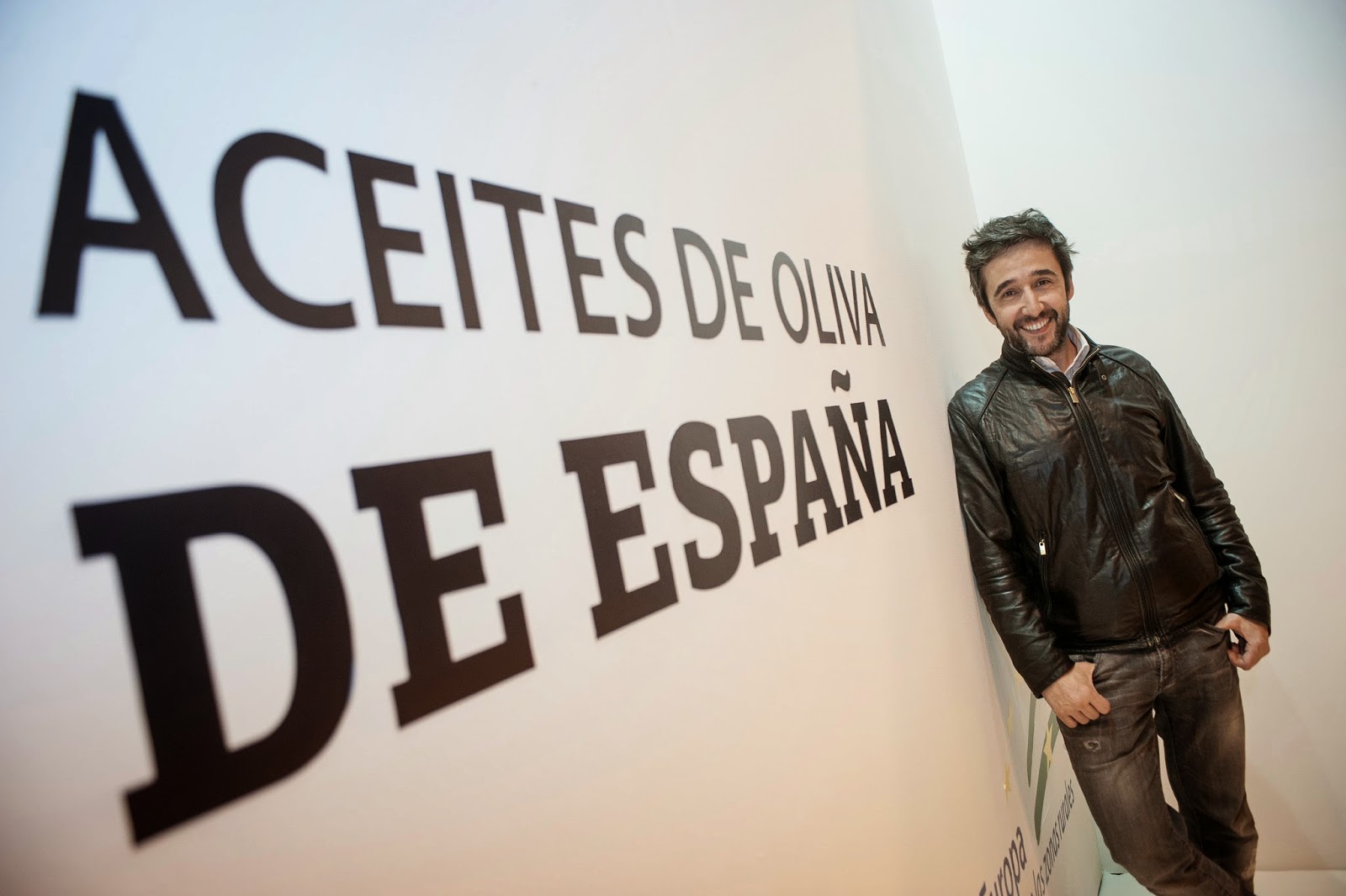 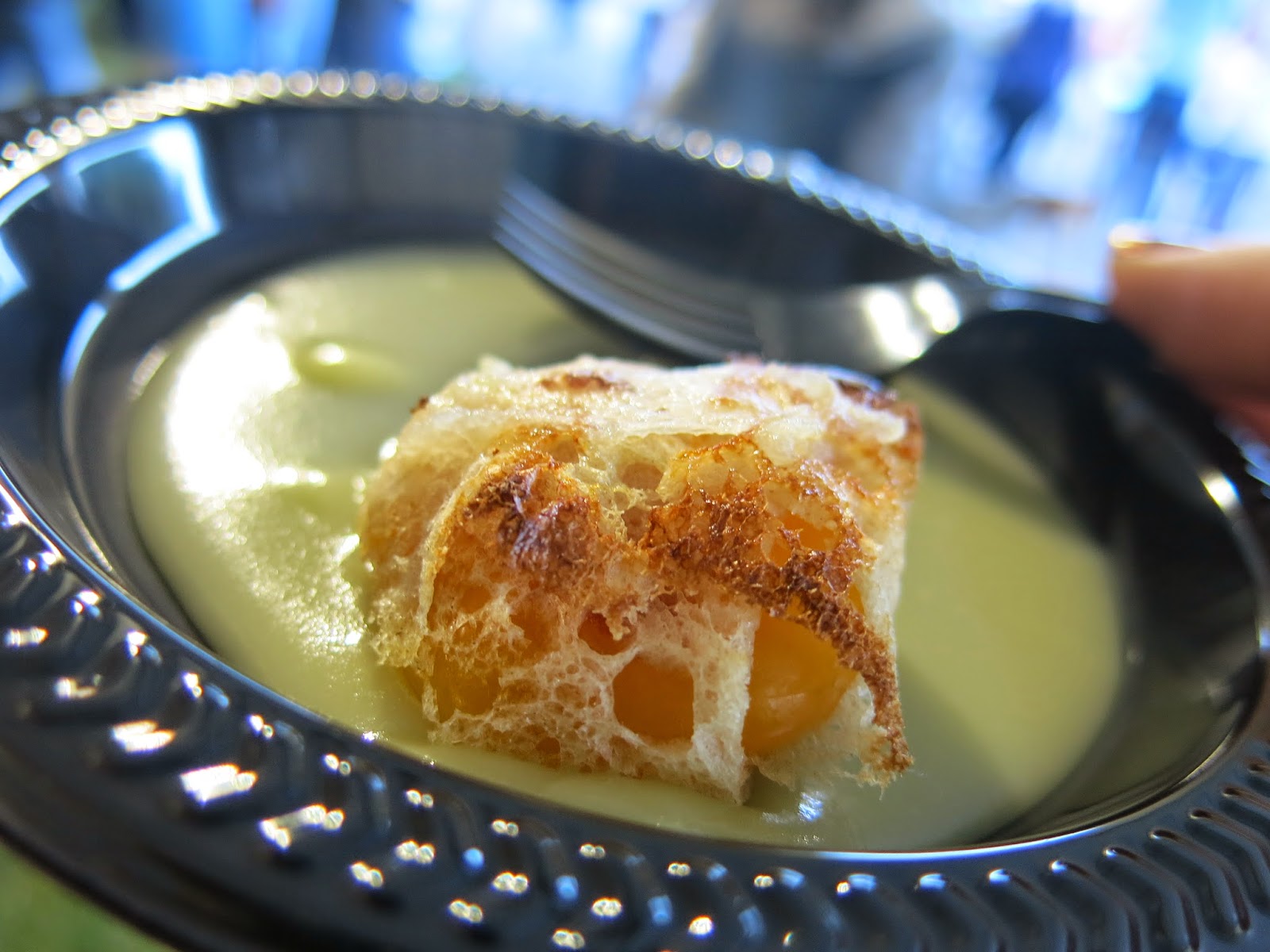 Arriving at the tent last Wednesday evening, Brandy found Chef Diego just finishing up his demo of a delicate egg yolk wrapped in a crispy pastry and a chilled cucumber gazpacho, which patrons were lining up to taste.  Luckily, Brandy was able to pull him aside from his duties for a brief moment to chat.  First, a curious Brandy asked Chef Guerrero about what a typical Spanish breakfast might consist of.  "Always olive oil with bread," he told her, "Usually with salt.  Sometimes with garlic, a little tomato, or ham.  That's a typical breakfast in Spain.  It's very healthy; you have the protein, a good fat with the olive oil, and the bread...it's a very good meal for the start of the day."  Now intrigued about the Spanish olive oil and what made it so desirable, Brandy quizzed Chef Guerrero a little further.  "In Spain, we have more than 2000 different kinds of olives," he said with a knowing smile, "So this makes us one of the biggest producers and consumers of olives in the world.  We have a great tradition because we've been producing [olive oil] for many centuries and we've mastered it.  The Italians actually buy our olives and they brand them as their own!"  Brandy watched Chef Guerrero's eyes wander with wonder over the other stalls of the festival and she inquired if he'd ever been to the Taste of Chicago before.  "This is my first time in Chicago," he said, sheepishly, "And I love it!"  Eager to recommend some places for him to try, Brandy next asked if he was looking forward to visiting anywhere in particular.  "Tonight I'm going to Next," he said, "But I'd also like to taste the most famous burger here in Chicago, because when I'm traveling around the world, I like to visit the markets and taste the local food.  This is how I learn." 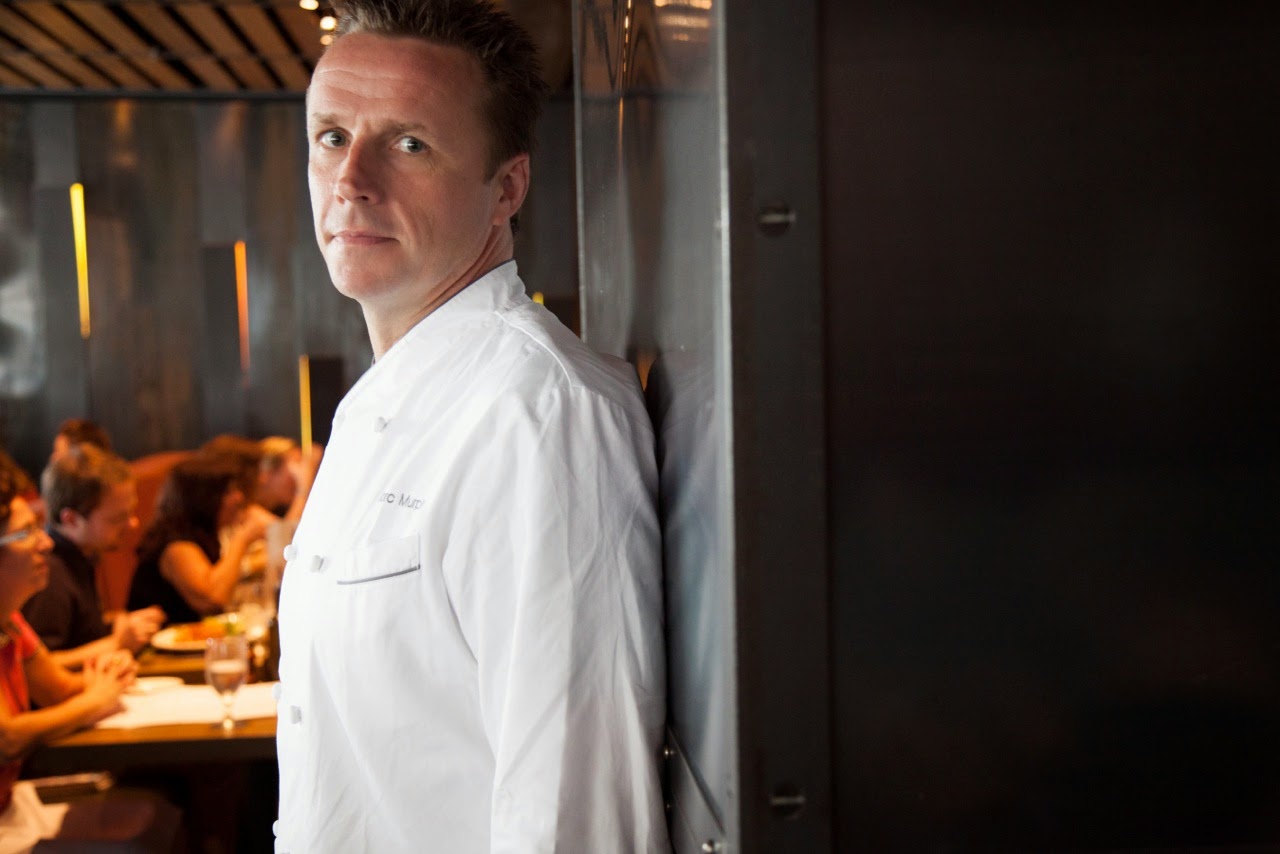 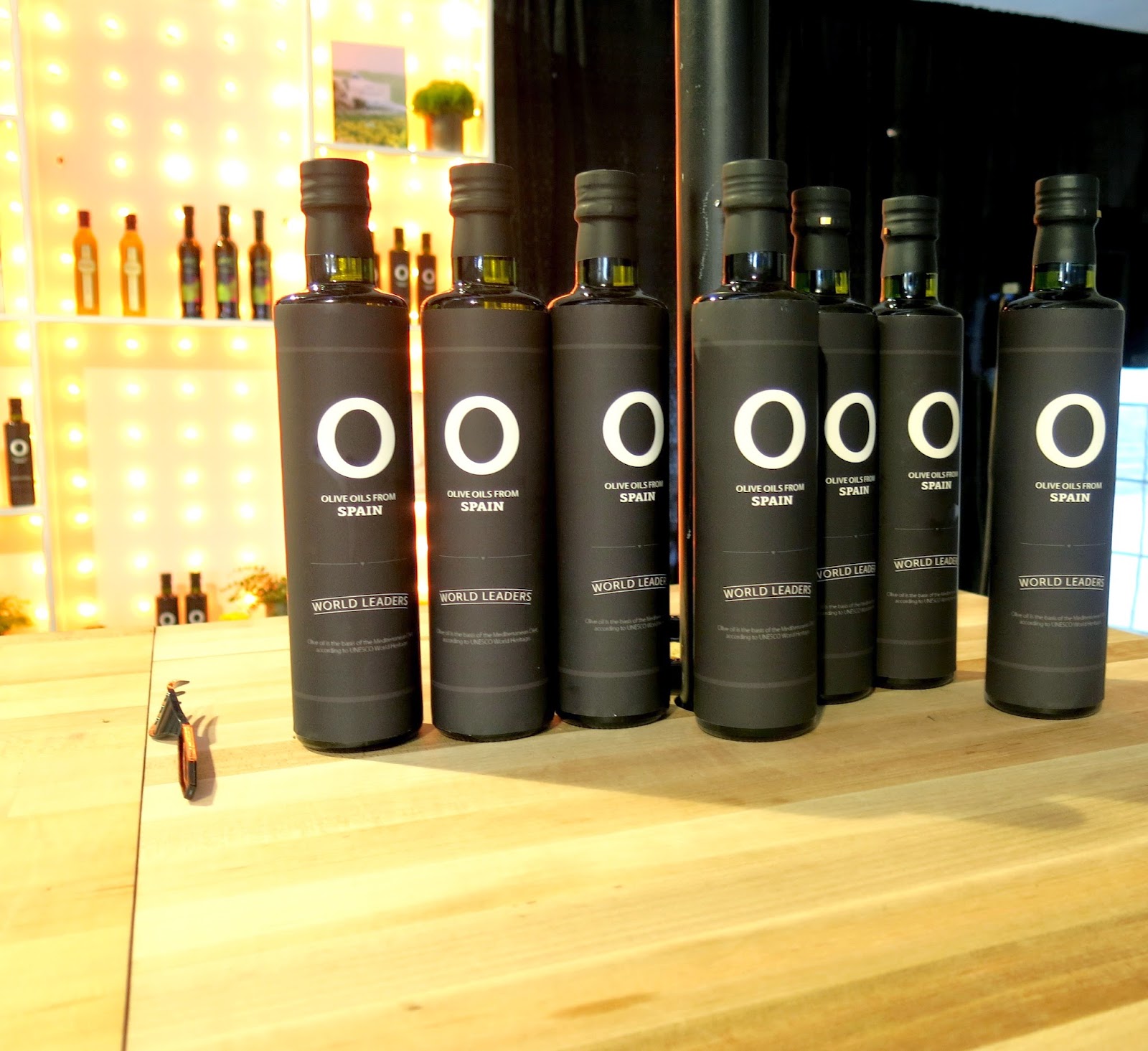 Next, Brandy tracked down Mark Murphy, who had done his demo earlier in the evening, making a salmon tar tar delicately dressed in the olive oil.  Chef Murphy was much taller in person than Brandy had expected, ("No wonder they always have him sitting on Chopped," she said, "He's intimidating enough without towering over the contestants!"), but she found him very personable and eager to talk food.  "I'm embarrased to say I've not been to the Taste of Chicago before," he whispered to Brandy, "I have been to the Illinois Restaurant Association show though.  My first time in Chicago, I actually came to go to Charlie Trotter's, which was an amazing experience."  When asked if he was looking forward to sampling any restaurants while he was in Chicago, Chef Murphy said, "We went to Purple Pig last night and that was fabulous," but he confessed he wasn't sure where his dinner might come from that night.  Asking, as she always does, about his favorite sorts of breakfast treats, Chef Murphy reminded her of his famous Pan Perdu, which he demonstrated on an episode of Best Thing I Ever Made, but also admitted that left to his own devices, he preferred a savory breakfast.  "I like a simple egg, fried up in some of this really great olive oil we have here until it's runny and I usually take a hunk of day old bread, run it under water for a second or two to wake it up a little, and make some toast.  Pretty simple, but it's just so satisfying to dunk that bread in the yolk." 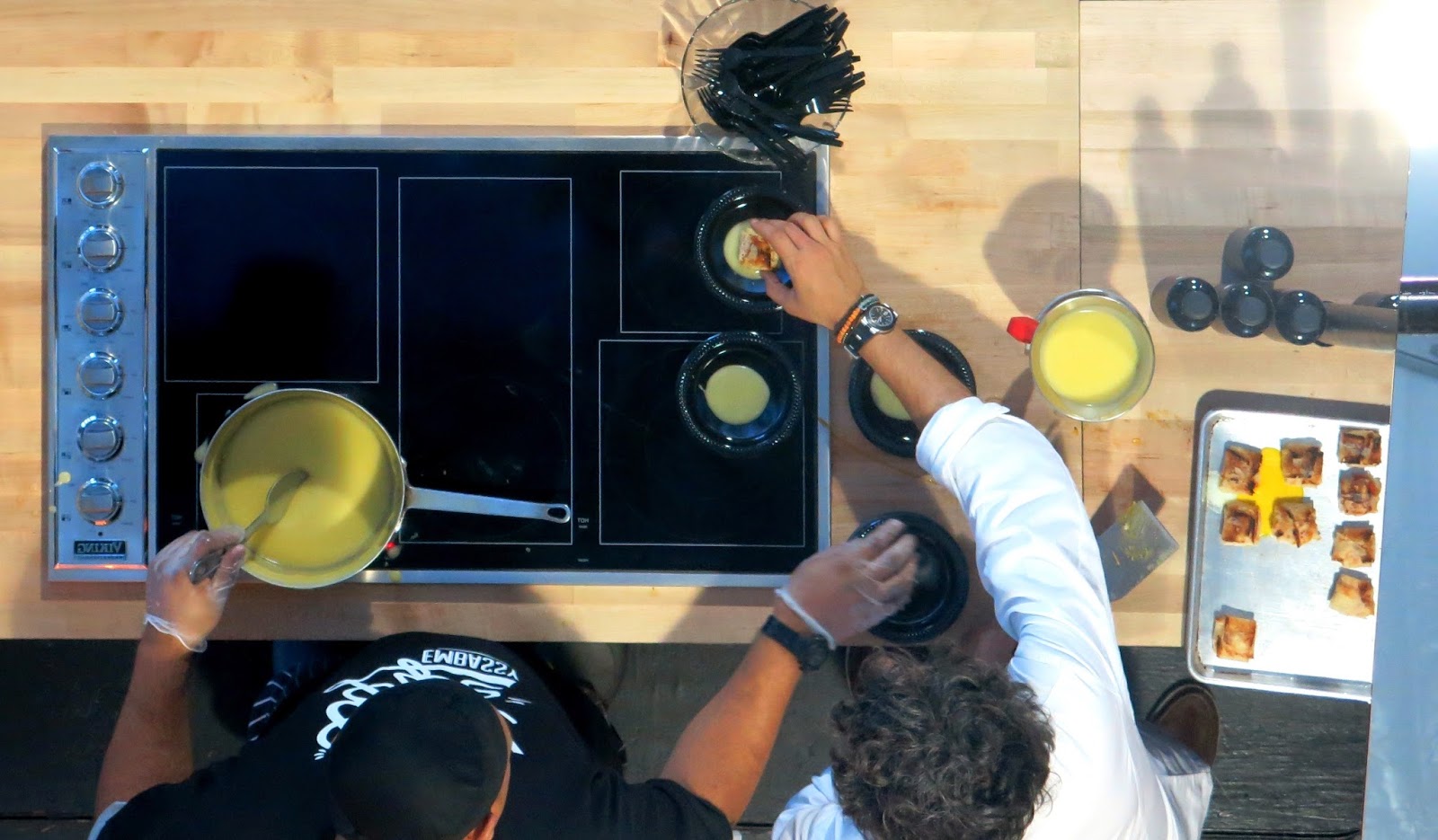 So inspired was Brandy by the chefs and the amazing olive oil they were promoting that she decided to put it to good use and create a little magic of her own once she got home.  Taking the idea of a classic olive oil cake and Chef Guerrero's description of a typical Spanish breakfast, Brandy created a moist and healthy olive oil muffin, packed with a favorite Spanish fruit; fresh apricots.  Because these muffins contain no butter, but are packed with heart healthy olive oil, they remain succulently indulgent without turning your breakfast into a meal of empty calories.  Make sure to let Brandy know if you try these out for yourselves by tweeting us or visiting our Facebook page! 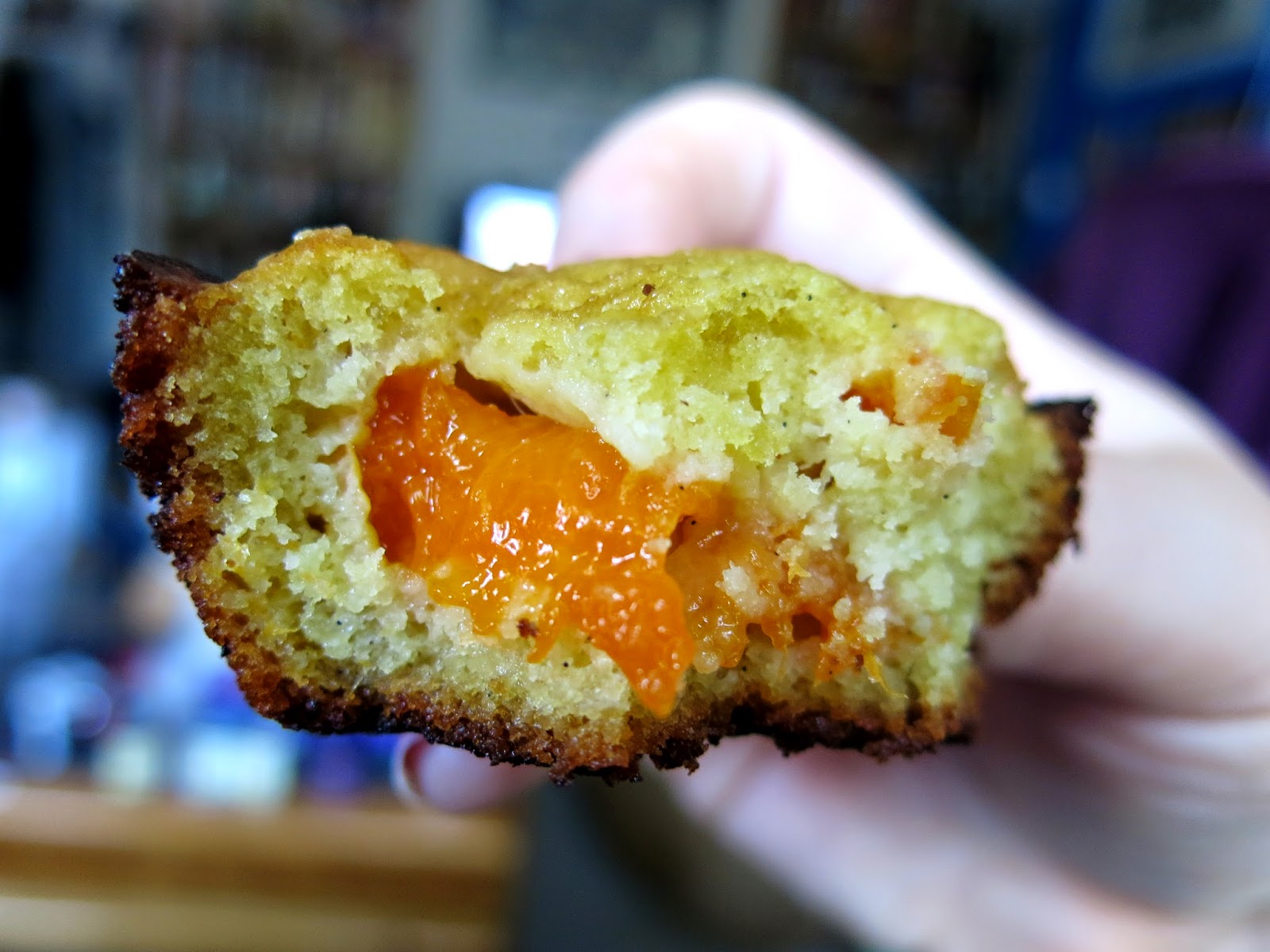 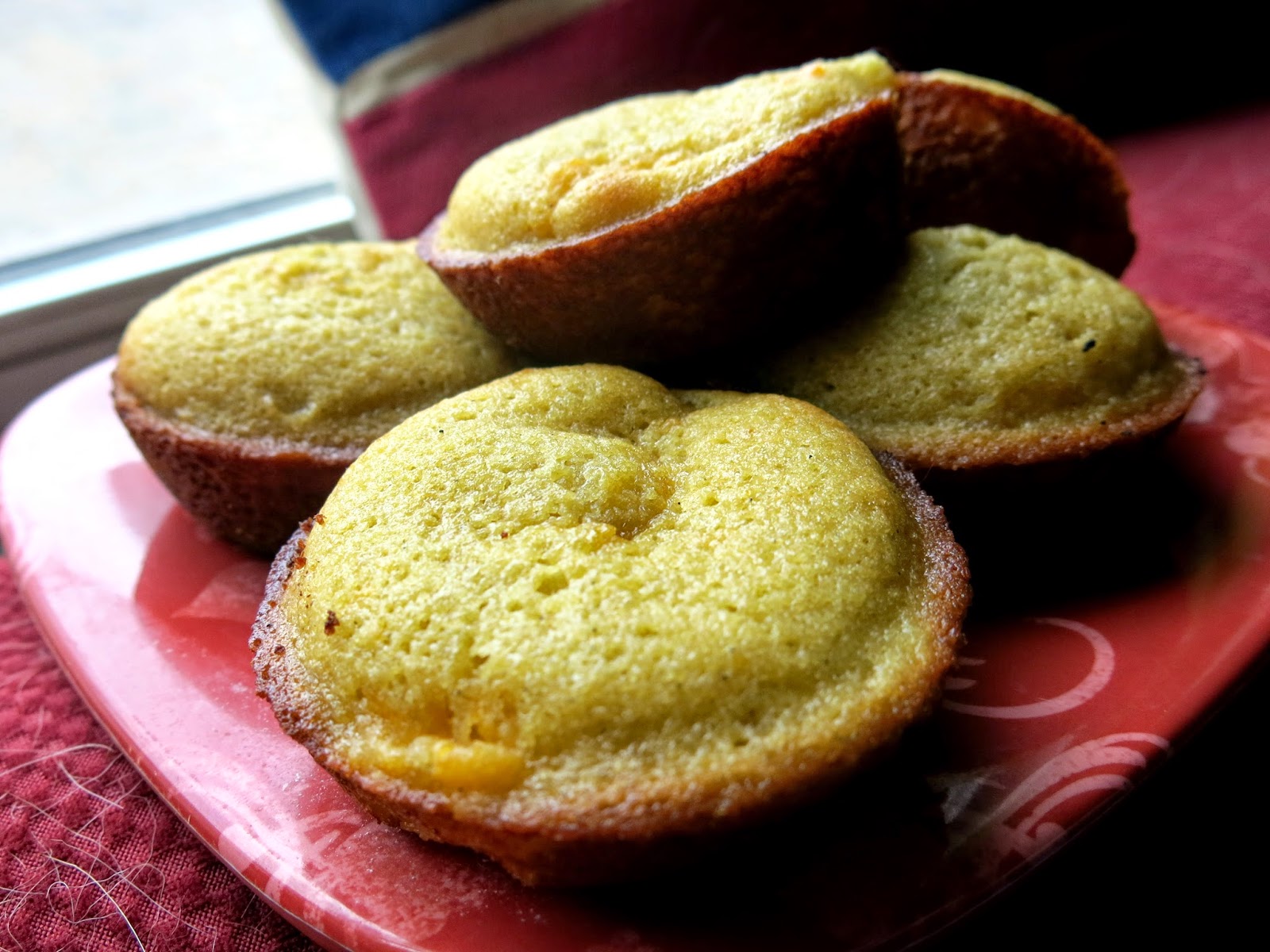 In a large bowl, combine the flour,baking powder, baking soda, sugar, and salt.  In a second smaller bowl, combine the vanilla, eggs, olive oil, and milk.  Slowly add the wet ingredients to the dry 1/2 cup at a time and stir until the batter is smooth and free of any lumps.  Add the apricots to the mixture, reserving about 24 pieces to be added at the end, and stir gently to combine.

Preheat an oven to 325 degrees and grease a muffin tin with cooking spray (alternatively, you can use paper liners).  Fill each cup of the muffin tin with batter until almost full (the muffins will not rise a lot, so don't worry about overfilling).  Add a final piece of apricot to the middle of each muffin, then sprinkle with coarse sugar (if using).  Bake for 20-25 minutes, or until the sides are golden brown and a tester comes out clean.  Let cool for 15 minutes and serve.