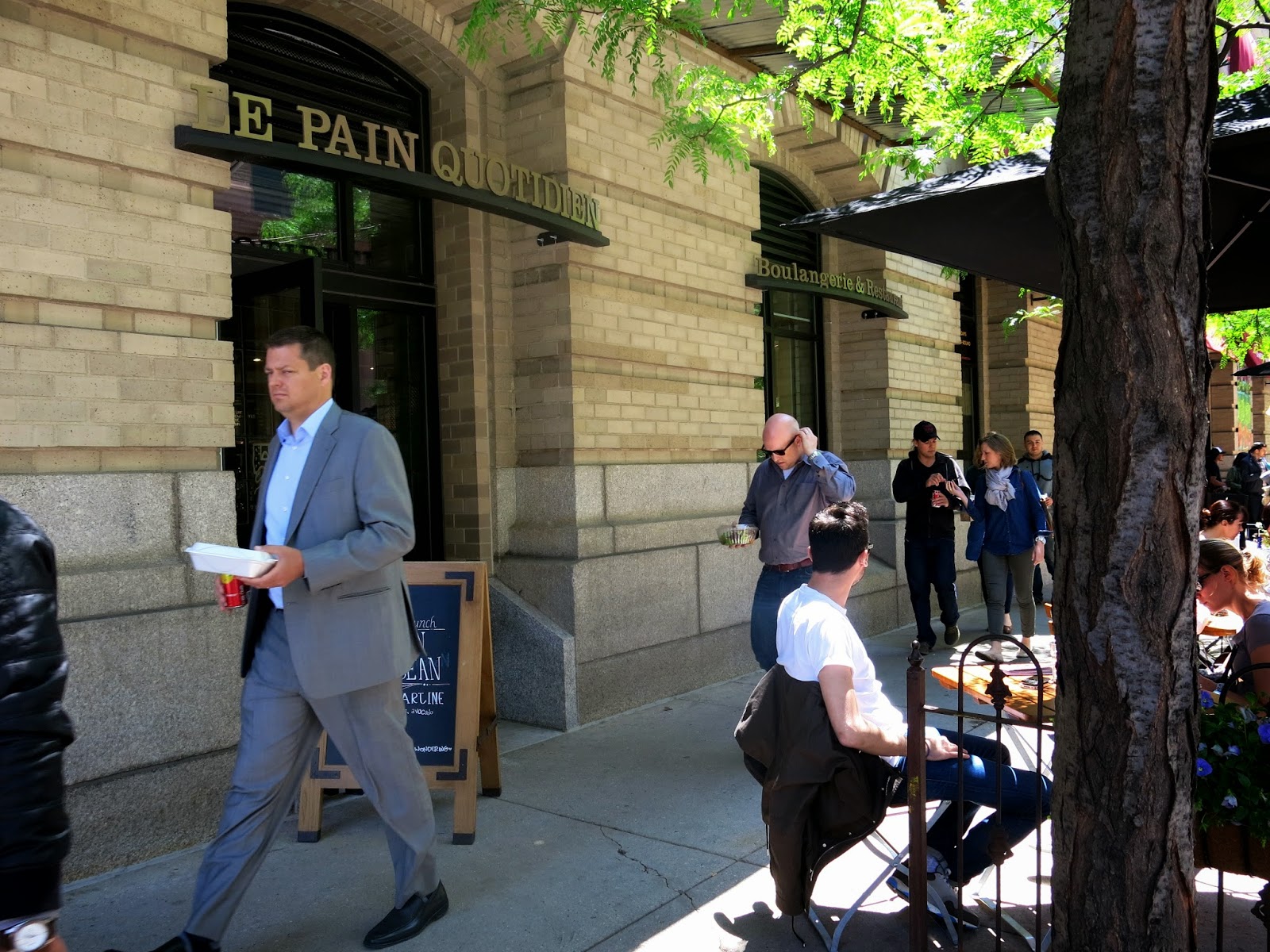 It's easy to be skeptical when the phrase "chain restaurant" gets thrown around.  Images of flat, flavorless burgers, cookie cutter structures, and quirky neon colored cocktails will usually come to mind.  When Brandy first came to the USA, chain restaurants were all the rage and it was difficult to find any independent establishments.  "I understand the appeal of them, being able to get the same meal no matter where you are in the country," Brandy mused, "But knowing the vast majority of the food is pre-cooked and frozen at those places just strips away all the desire for me." 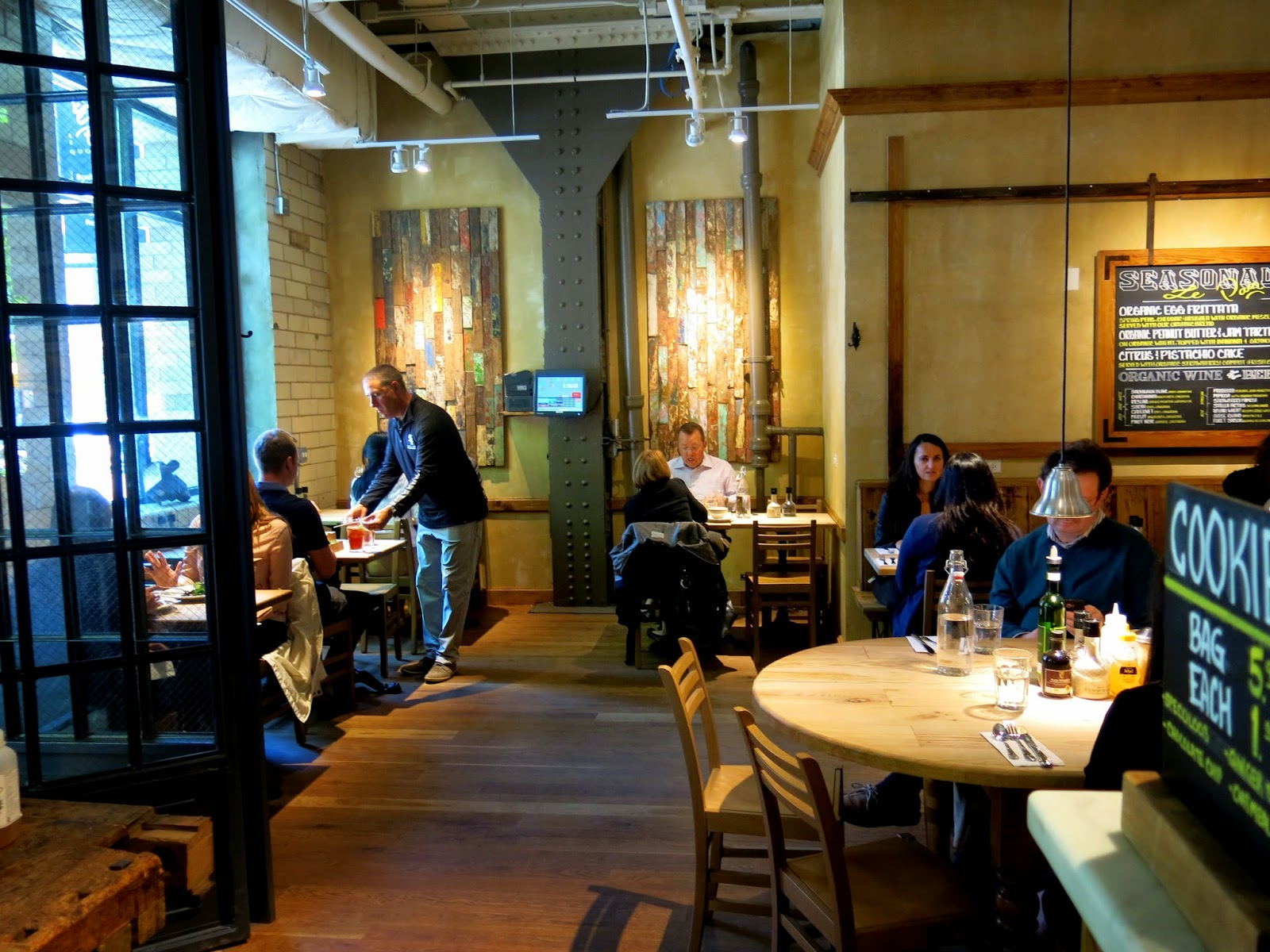 One notable exception is Le Pain Quotidien (which translates to "The Daily Bread"), a European based bakery and cafe founded by baker Chef Alain Coumont with over 200 locations world wide, which are just now testing the waters in Chicago with their newest location in the West Loop.  Le Pain (for short) may be a chain in theory, but their ways of doing things are vastly different than any other chain you might come across.  Their breads, the corner stone of their business, are baked fresh from scratch every single day on site, and all of their food is sourced as locally as possible for each location.  An emphasis is made on using seasonal produce as well as creating traditional French Provincial dishes in a clean, healthy, and organic way.  This, to be sure, is no ordinary chain restaurant, which is why Brandy enlisted her dear friend Bailey Blue (Brandy considers Bailey her resident expert in all things organic, as Bailey grew up on a farm) to accompany her to Le Pain for a little brunch. 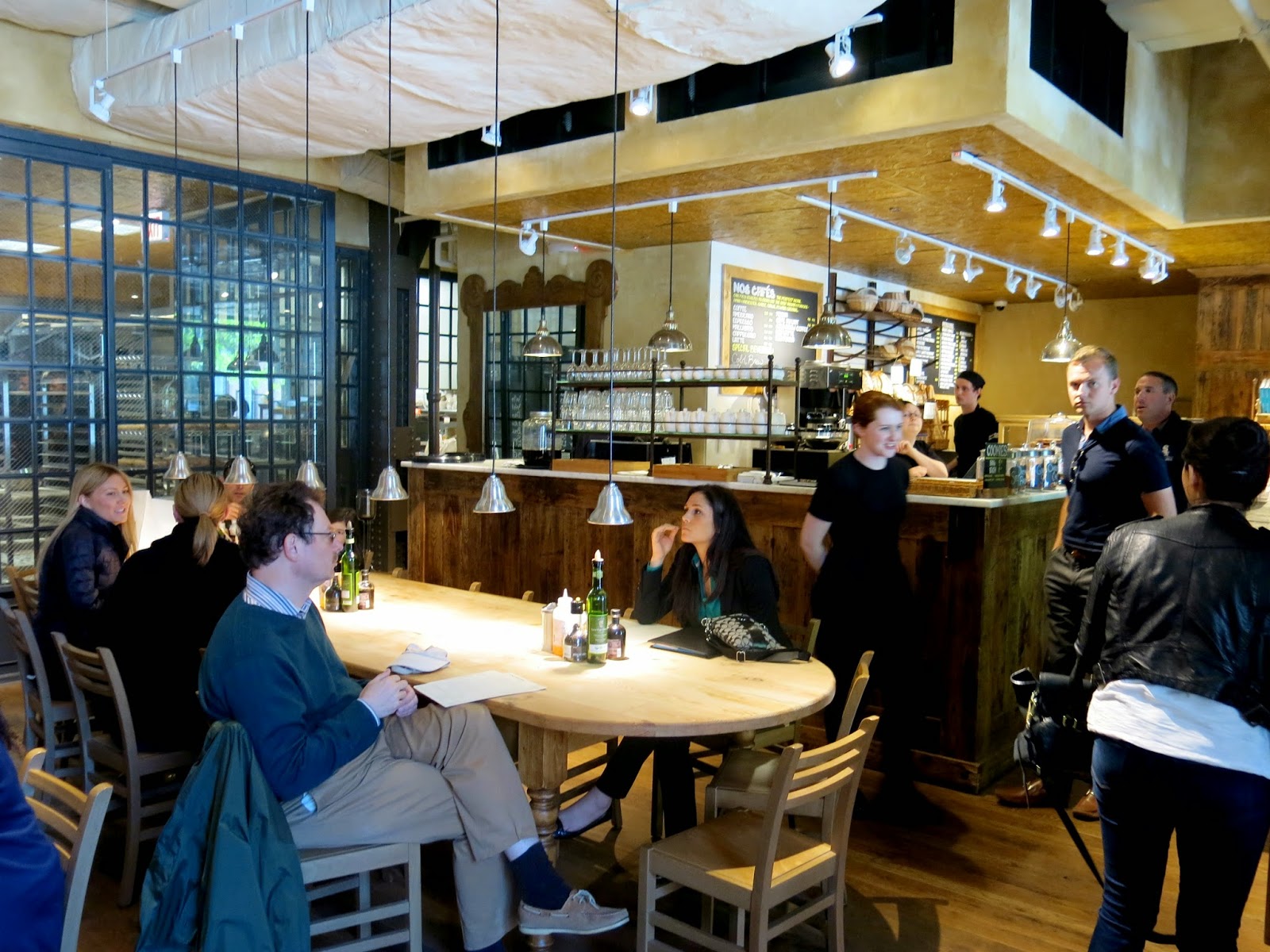 The inside of Le Pain was adorably rustic with one side being devoted to the cafe and "pantry" while the other side was dotted with butcher block tables.  The centerpiece of the dining area was one large communal table (there is one in every Le Pain location, carrying through a tradition of community and sharing from the founder's Belgian upbringing), serving either as a spot for larger dining parties or as a meeting area for the cooking classes and wine and beer tastings the space would eventually hold.  The back of the room was made up of a large glass wall which allowed diners to watch the bakers in action as they prepared the breads and pastries for the store (this bakery will also eventually supply two other locations opening over the next few months in Lincoln Park and Gold Coast). 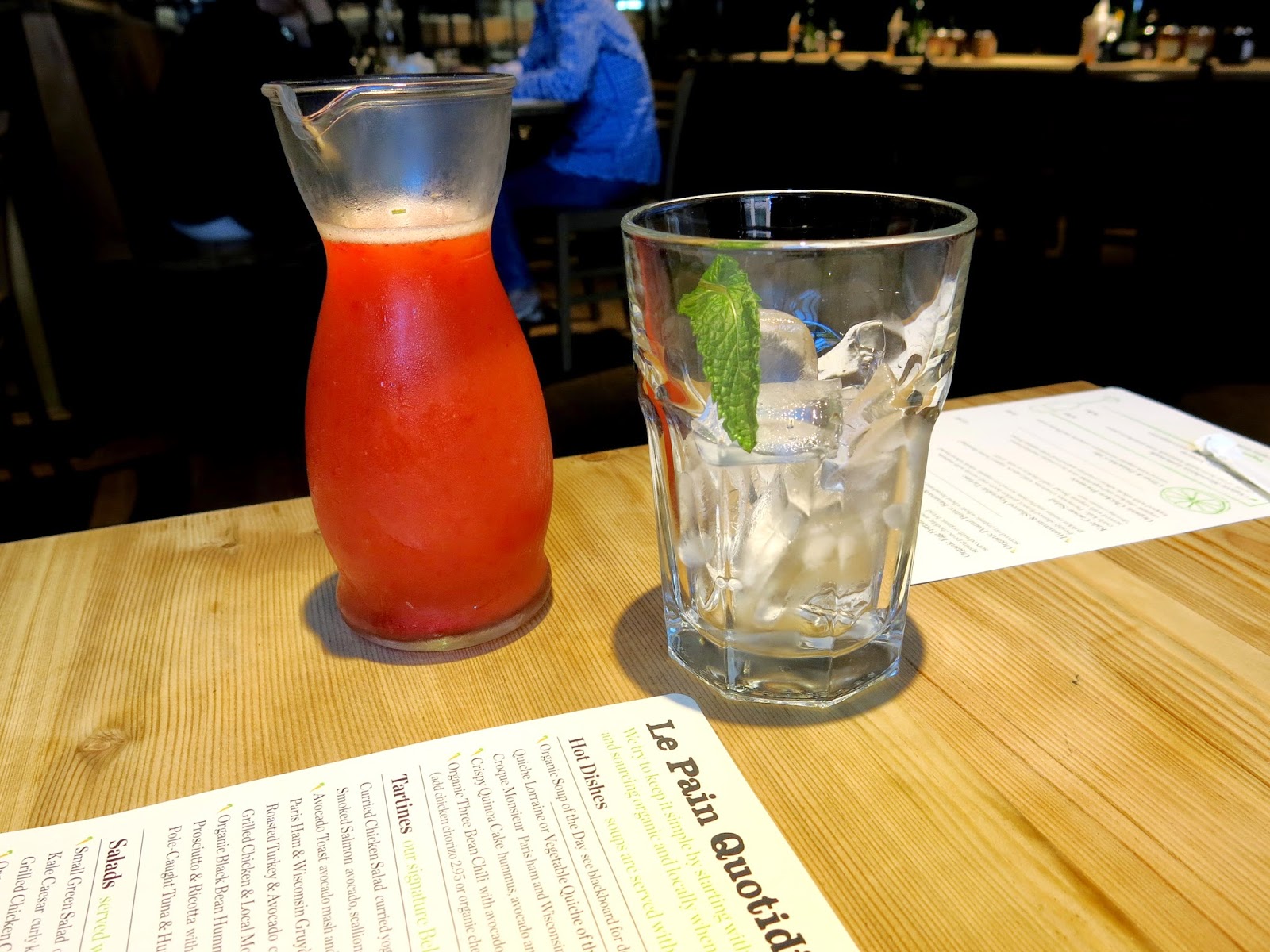 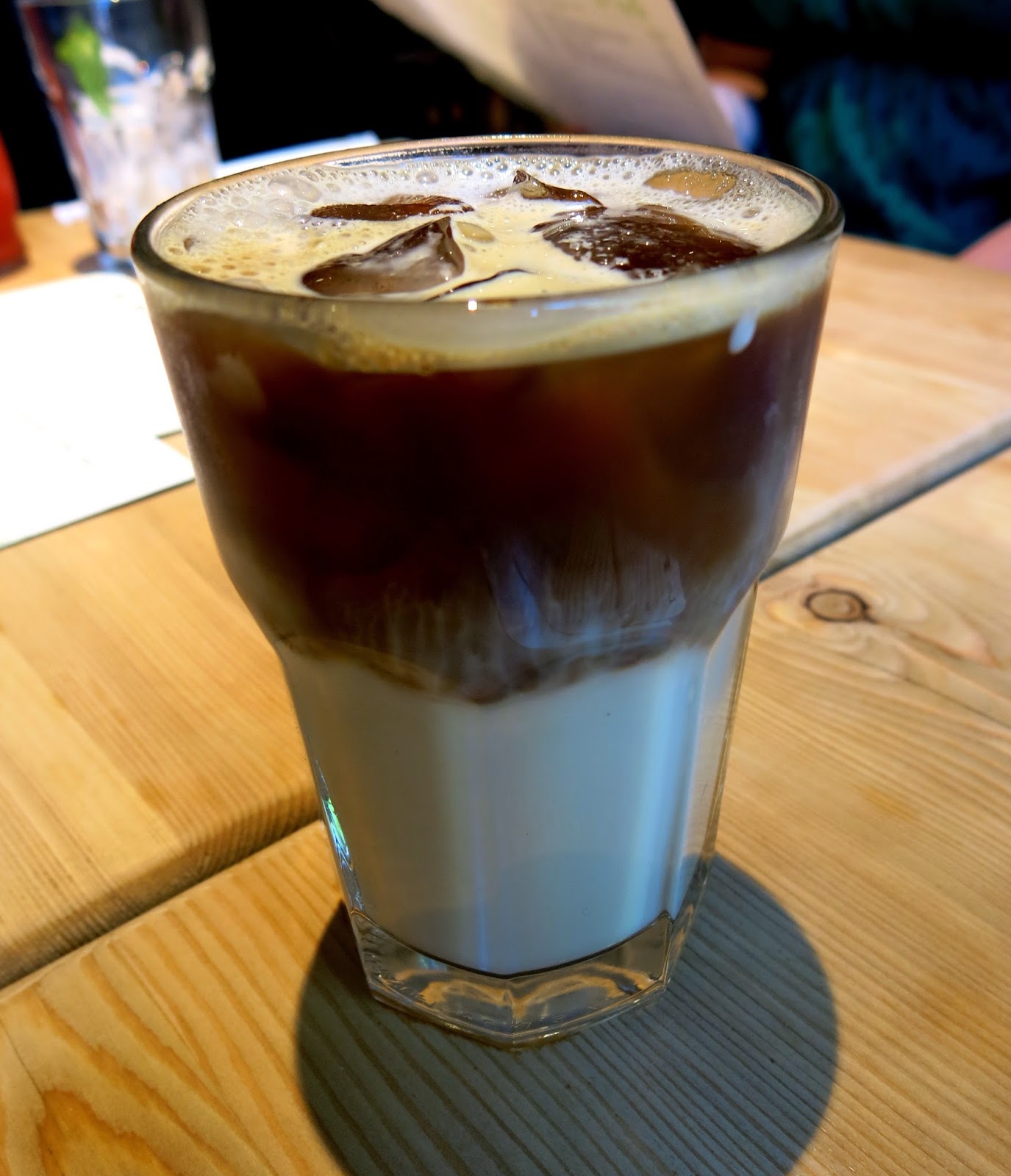 The extensive menu proved to be a bit daunting for Brandy and Bailey, so they decided to start off with some drinks while they whittled down their options; for Brandy, a lovely Iced Latte with almond milk, and for Bailey, a fresh Strawberry Lemonade.  They both especially loved how the lemonade was served; presented with a glass of ice topped with a sprig of mint and a small carafe of the lemonade to pour at the drinker's whim. 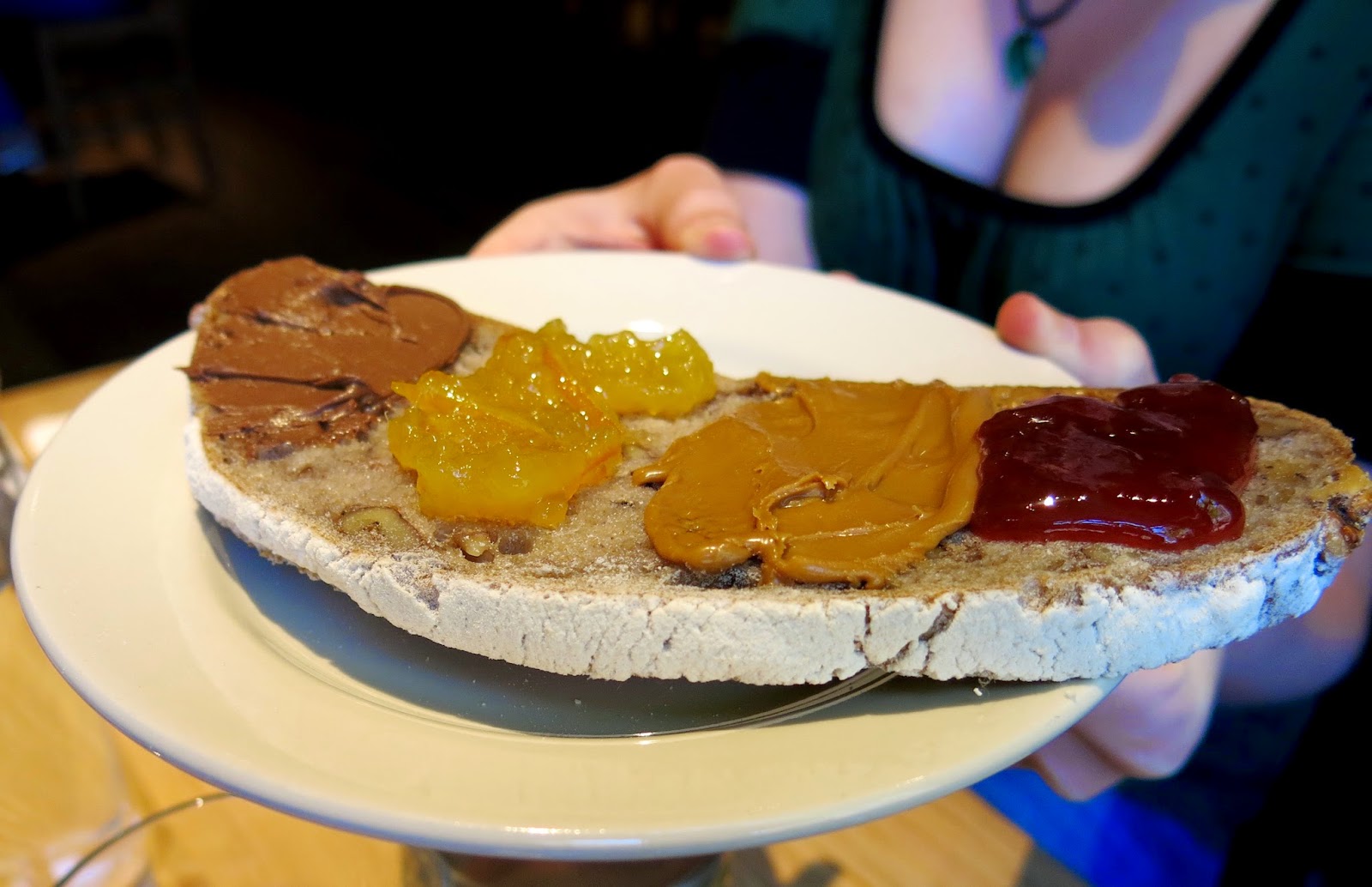 "Seeing as how all those beautiful loaves of bread are staring us in the face (as is the baker who's making them), perhaps we should start with the Baker's Basket," Brandy suggested, to which Bailey wholeheartedly agreed.  The basket came jam packed with slices of all different sorts of breads as well a variety of Le Pain's own spreads and jams.  The standout amongst the breads was something called The Flute, which was a long, narrow bread filled with raisins and hazelnuts.  "It's like trail mix in a bread!" Bailey exclaimed, "And it could fit in my pocket, so I could actually take it hiking a trail with me!"  The Strawberry Rhubarb Jam was another hit with its gentle tartness, but the one that had Brandy and Bailey's eyes rolling back in their heads from bliss was the Speculoos, a spread not unlike peanut butter in consistency, which is made with cinnamon and ginger spiced cookies.  Glancing over at the pantry section of the store, Brandy could just make out a few jars of the heavenly stuff on the shelf.  "Keep your eyes on those," she told Bailey in a whisper, "If anyone makes a move towards them before we're done, tackle them like a linebacker."  Bailey nodded solemnly. 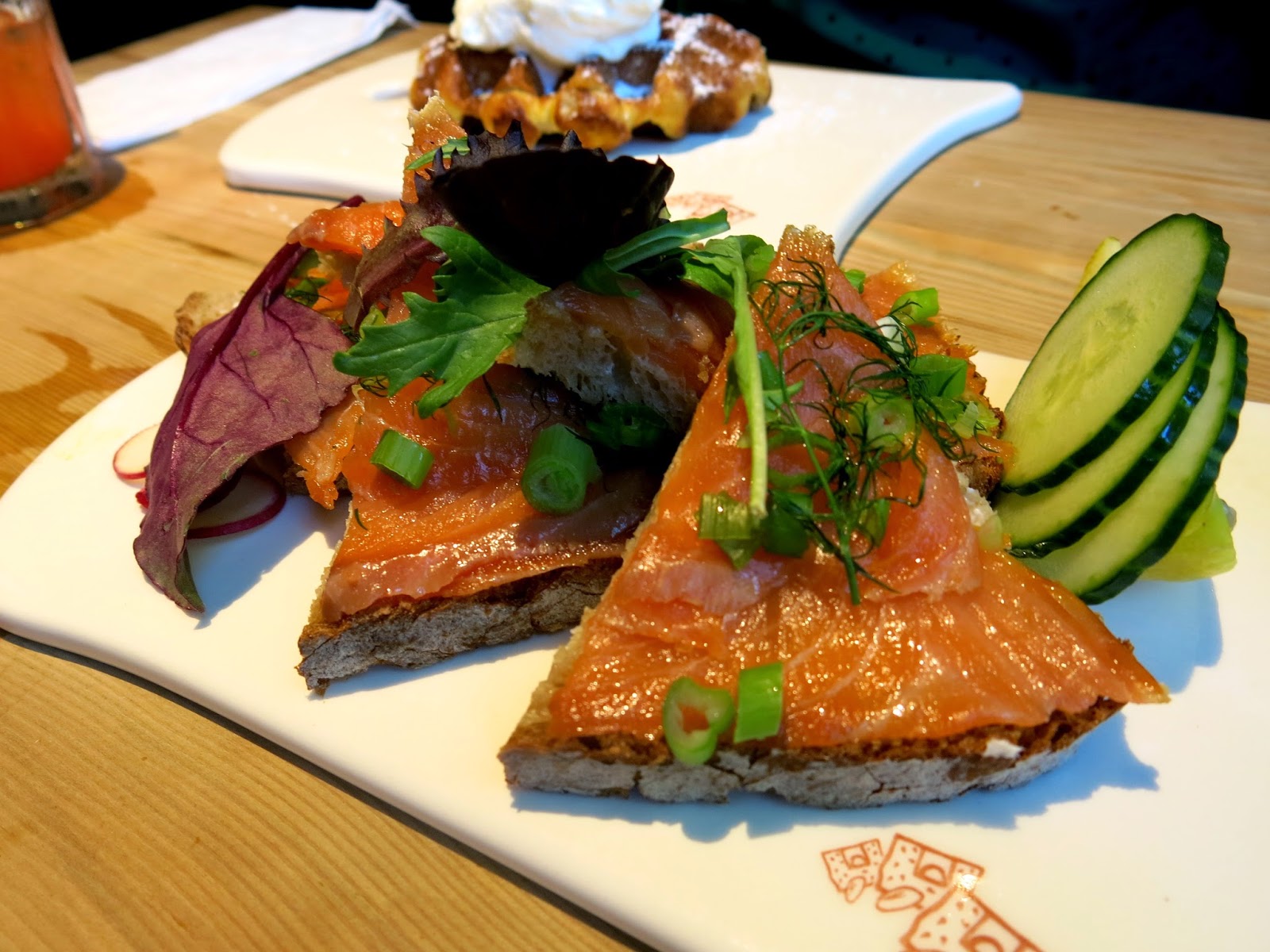 Finally the entrees were decided upon.  To split, Brandy and Bailey ordered the Smoked Salmon Tartine, a sort of open faced sandwich with thin slices of salmon, scallions, dill, and fresh avocado on the side.  Bailey, as an eternal worshiper of salmon in any form, was in love from the first bite, but for Brandy, who tends to be a bit more skeptical about fish, it took exactly two bites for her to be convinced.  "So fresh!" she exclaimed, "No fishy taste whatsoever and the herbs are just perfect."  Bailey didn't hear her, as she was too busy reaching for another slice. 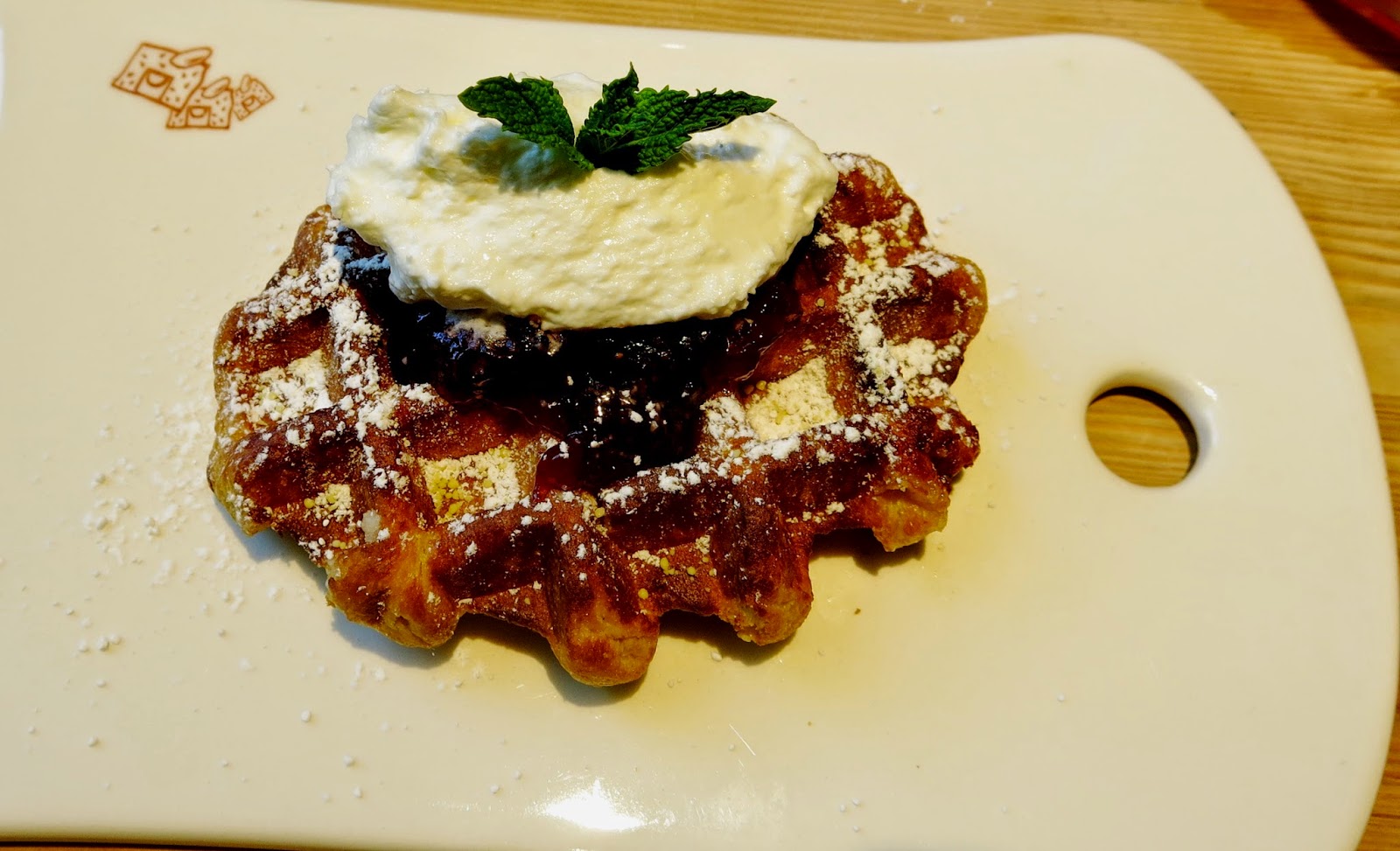 For Bailey's entree, she chose the Belgian Waffle, a traditional little confection served with strawberry jam and fresh whipped cream.  Bailey thought the texture of the waffle was just divine, as the outside had a lovely crunch, but it was the airy inside that really surprised her.  "I thought it might be a bit heavy from the look of it," she said, "But it's really nice and light on the inside!"

Brandy chose the daily Vegetable Quiche, which was made with spinach and mushrooms and came with a very colorful side salad.  Brandy couldn't resist diving into the salad first, as the beautiful slices of yellow beets and ribbons of orange carrots against a bed of red and green was just too pretty to resist.  The salad was perfectly dressed with a bright vinaigrette using a very light hand, which Brandy greatly appreciated.  The quiche itself was quite nice: the top had a great baked flavor, while the inside was jam packed with the veggies, making for a less eggy taste in general.  This was a more substantial quiche in texture than others Brandy has encountered, but she didn't mind at all.  "As long as a quiche is well balanced in its filling and unobtrusive in its crust, I'm a fan no matter if it's on the creamier, airier, or denser side," she explained. 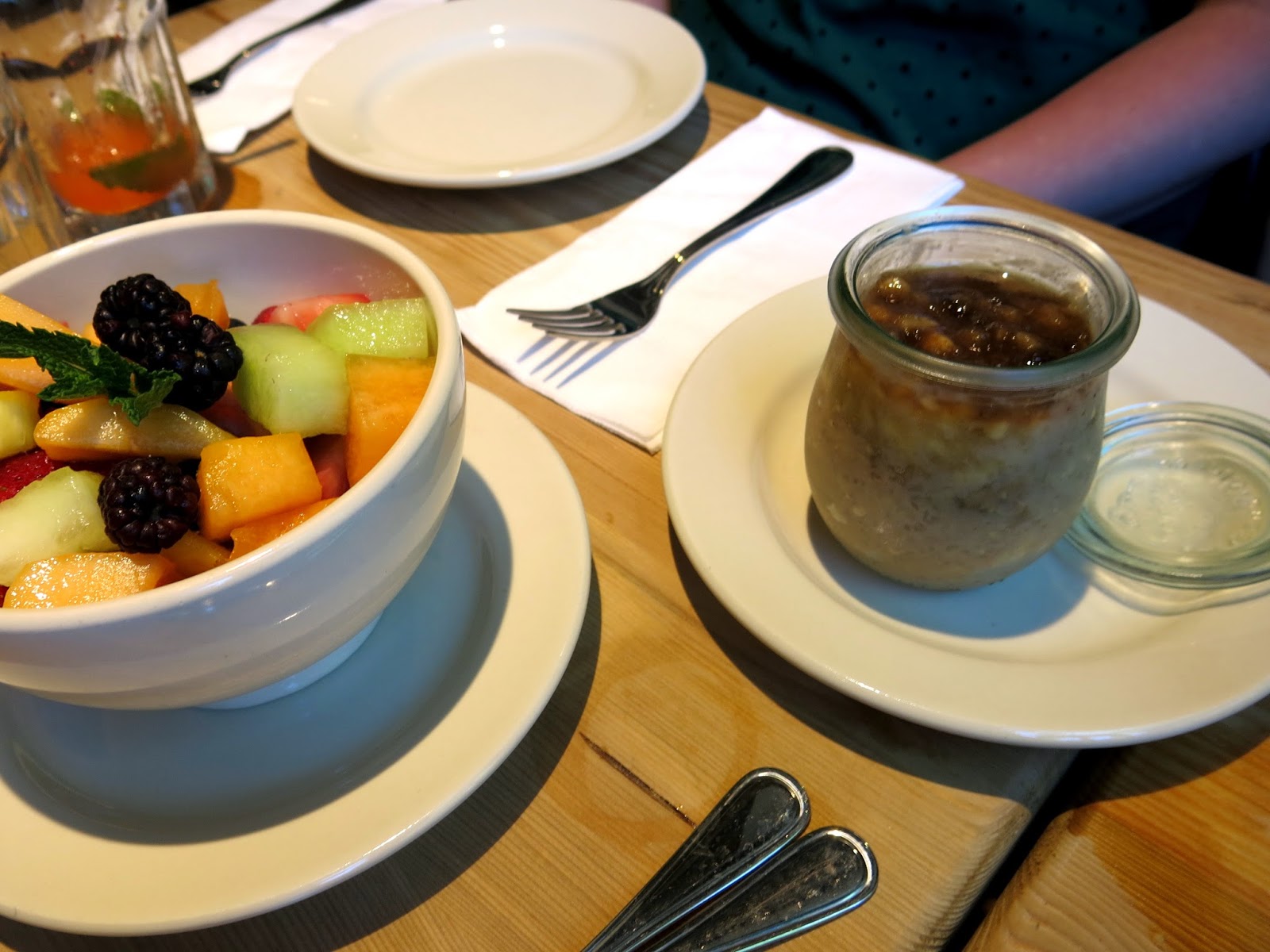 To finish off, Brandy and Bailey split a serving of Brown Rice Pudding and a Fresh Fruit Salad.  The fruit salad was a good, if pretty typical mix of berries and melon with a little bit of pineapple thrown in.  The strawberries were especially succulent, which had Brandy and Bailey performing a dance of the forks as they raced each other for every little red morsel.  The rice pudding had a very unique texture, not at all mushy, but an almost al dente chew, and had been flavored with a soft compote of agave syrup and bananas.  "I'll trade you the last spoonful for the last strawberry," Bailey said only half jokingly. 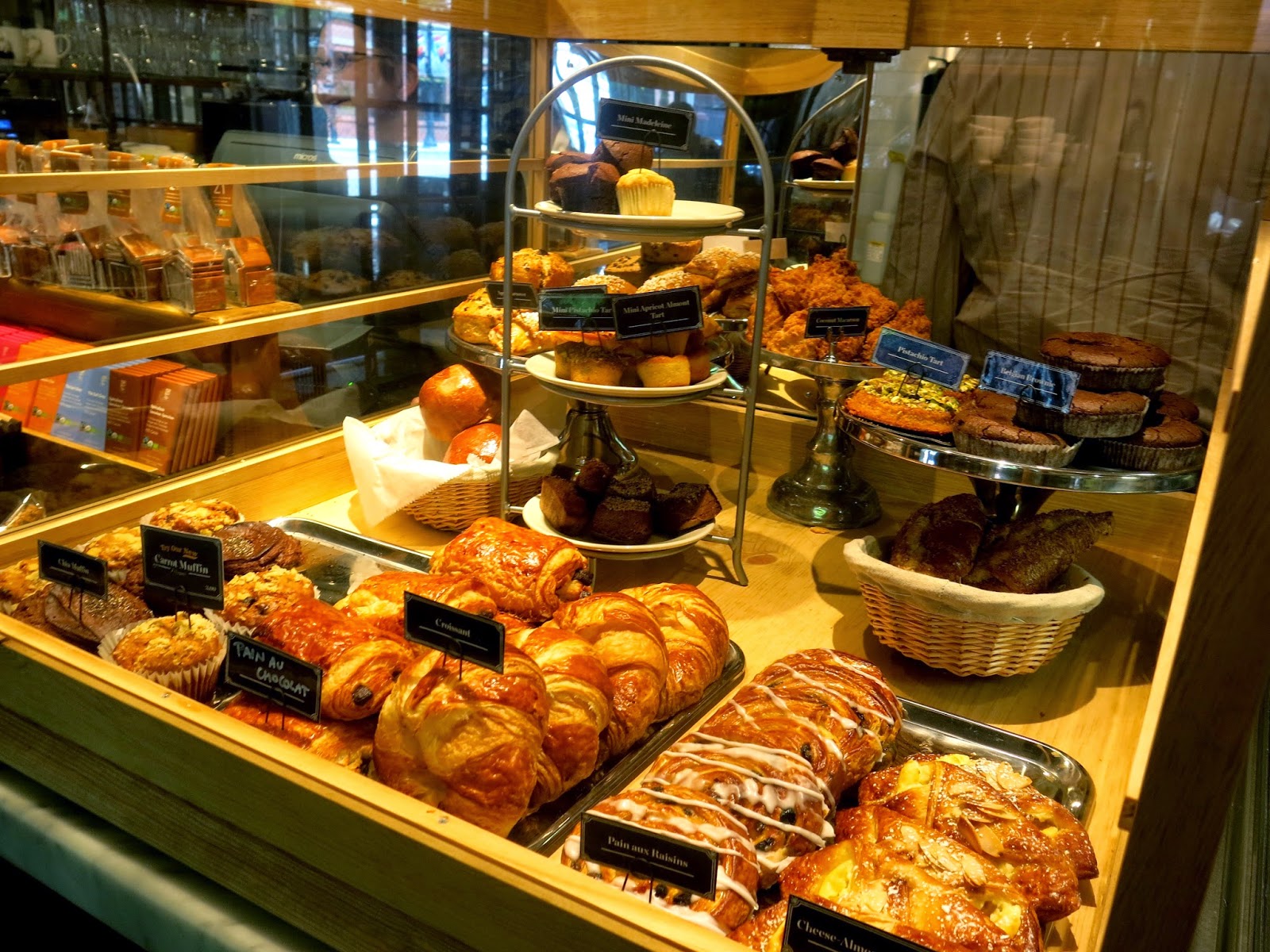 Their gracious server quickly swept in to clean up the table as Bailey and Brandy made a beeline for the cafe and pantry section, where they each grabbed one of the containers of Speculoos before anyone else could.  Not able to control herself, Brandy also ordered up a few of the luscious looking pastries from the case (a French Cream Donut, an Apple Cannele, and a Pistachio Tart) to take home and gorge on later.  Thoroughly impressed by Le Pain's commitment to fresh, local, and organic food, Brandy declared, "This is no chain restaurant, as far as I'm concerned.  This is simply a wonderful bakery with a lot of siblings."

The writers of this blog were invited to dine at Le Pain Quotidein at no cost in exchange for an honest review. 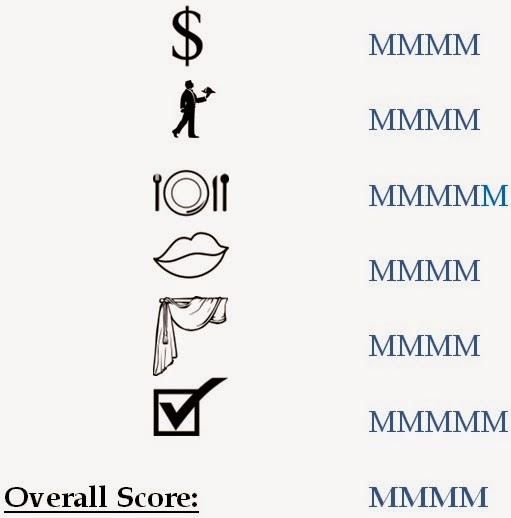