The Monarch or Horses and Hawks on a Field of Green 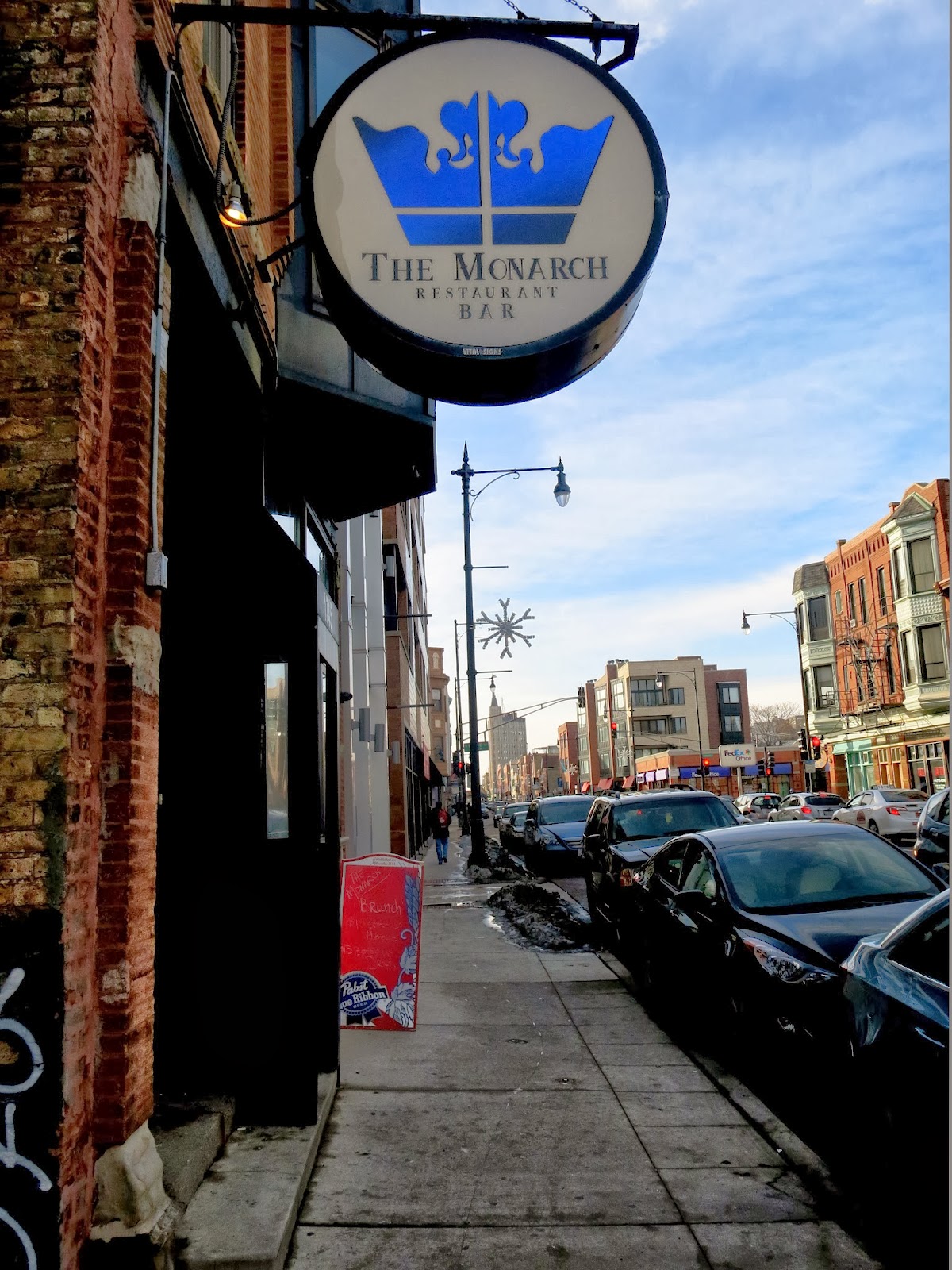 Ever since being properly introduced to American football at the beginning of the fall last year, Brandy has made a determined effort to keep pace with the weekly competitions, often spending her Sundays afternoons (after brunch, of course) at her local pub, watching along with all of the other enthralled fans.  "I may not understand what's happening half the time, but I love being caught up in the excitement of the crowd," Brandy says, "That and when we get to yell at the referees.  Reminds me of the time I was a part owner of Manchester United.  But that's another story..." 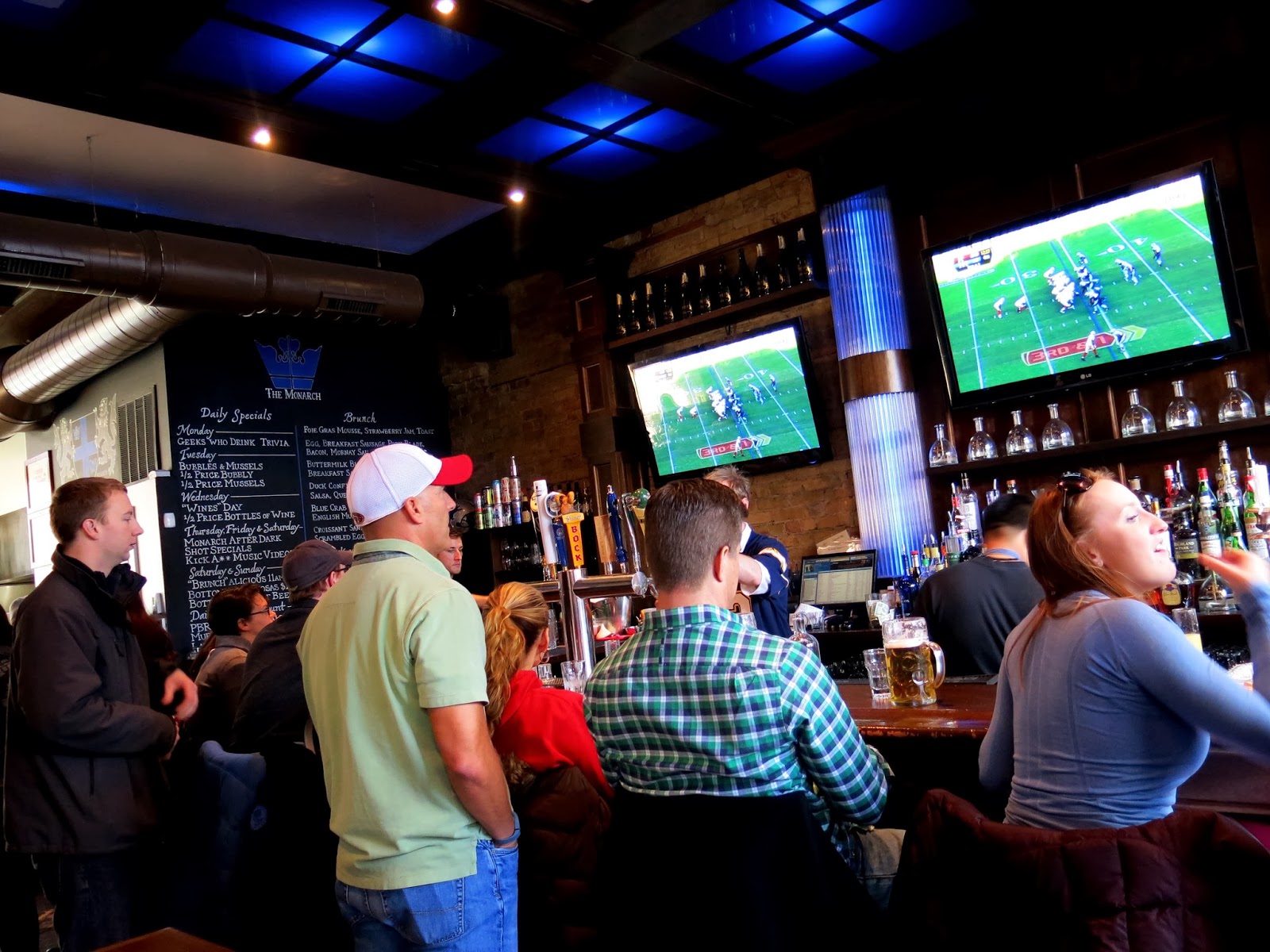 To watch the final weekend of playoffs, Brandy decided to combine her lust for sport with her brunching routine by killing two birds with one stone at The Monarch on the border of Bucktown and Wicker Park.  The small, closely packed space seemed rather run of the mill at first with its exposed brick wall, high tables, and dark wood bar, but there was a secretive, almost hidden sophistication to the place.  Little touches like a wax drenched silver candelabra on the bar and repeated heraldic symbols throughout the room gave a sense of history and decorum.

The menu too had its own hidden treasures.  Aside from the usual bar fair of burgers, fries, and the like, there were also more exotic choices like mussels with fennel and French toast with blood orange and mascarpone cheese.  While she mused over the choices, Brandy ordered up a mimosa, which while not exactly unique, was still nicely bright. 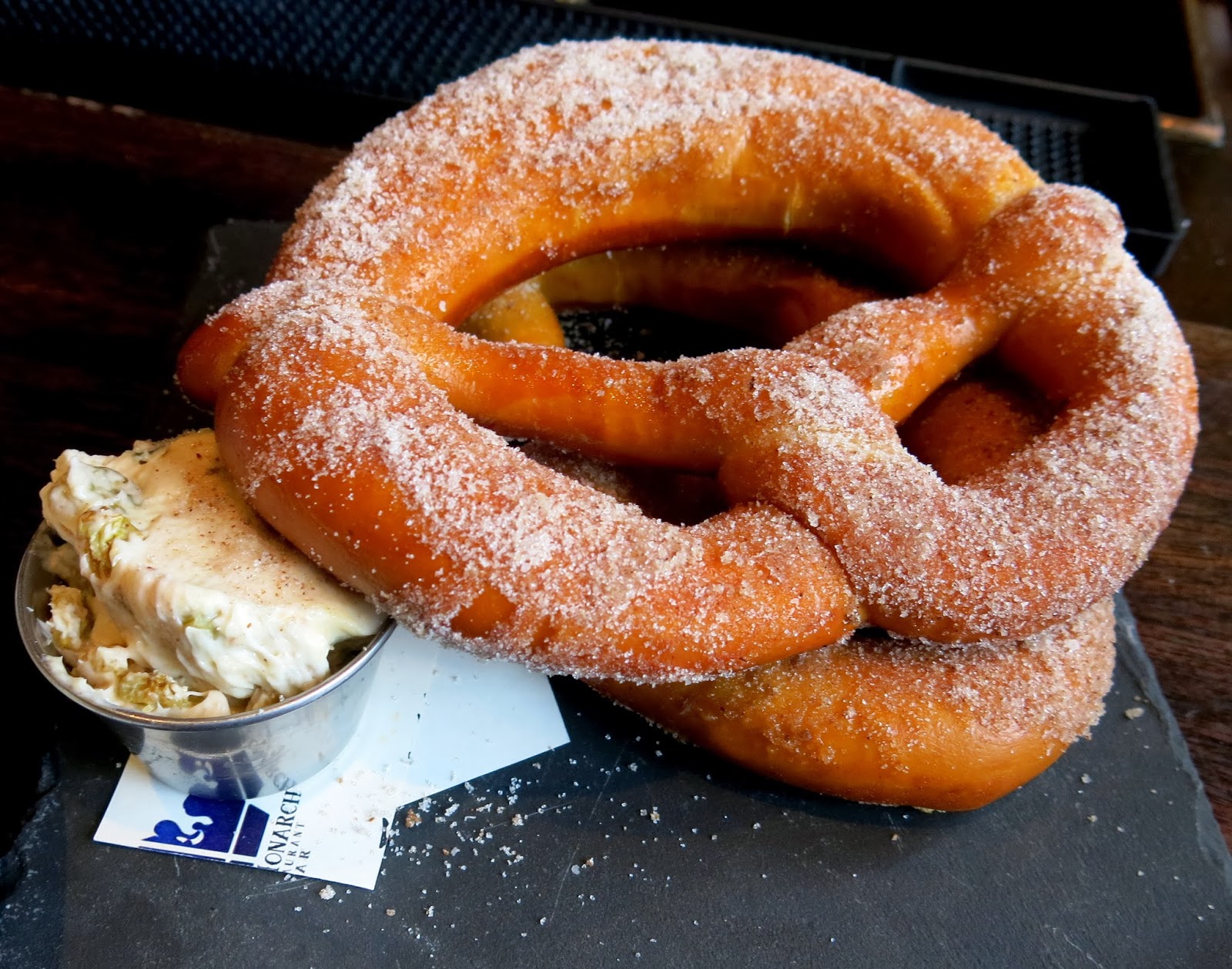 Finally, Brandy landed on a pair of sweet and savory dishes to snack on as she watched the champions of the gridiron battle it out on the big screens above the bar.  First up was the Sweet Spiced Pretzel with a side of cinnamon raisin cream cheese.  Brandy was simply staggered to find that the order came with not one, but two freshly baked pretzels, which were slathered in cinnamon and sugar.  Pulling the mouth watering confection apart and dunking it into the cream cheese made the perfect combination of flavors:  the salty skin on the pretzel mixed with the spice of the cinnamon, the sweetness of the sugar, and the creamy, thick cream cheese was comforting, familiar, yet surprising. 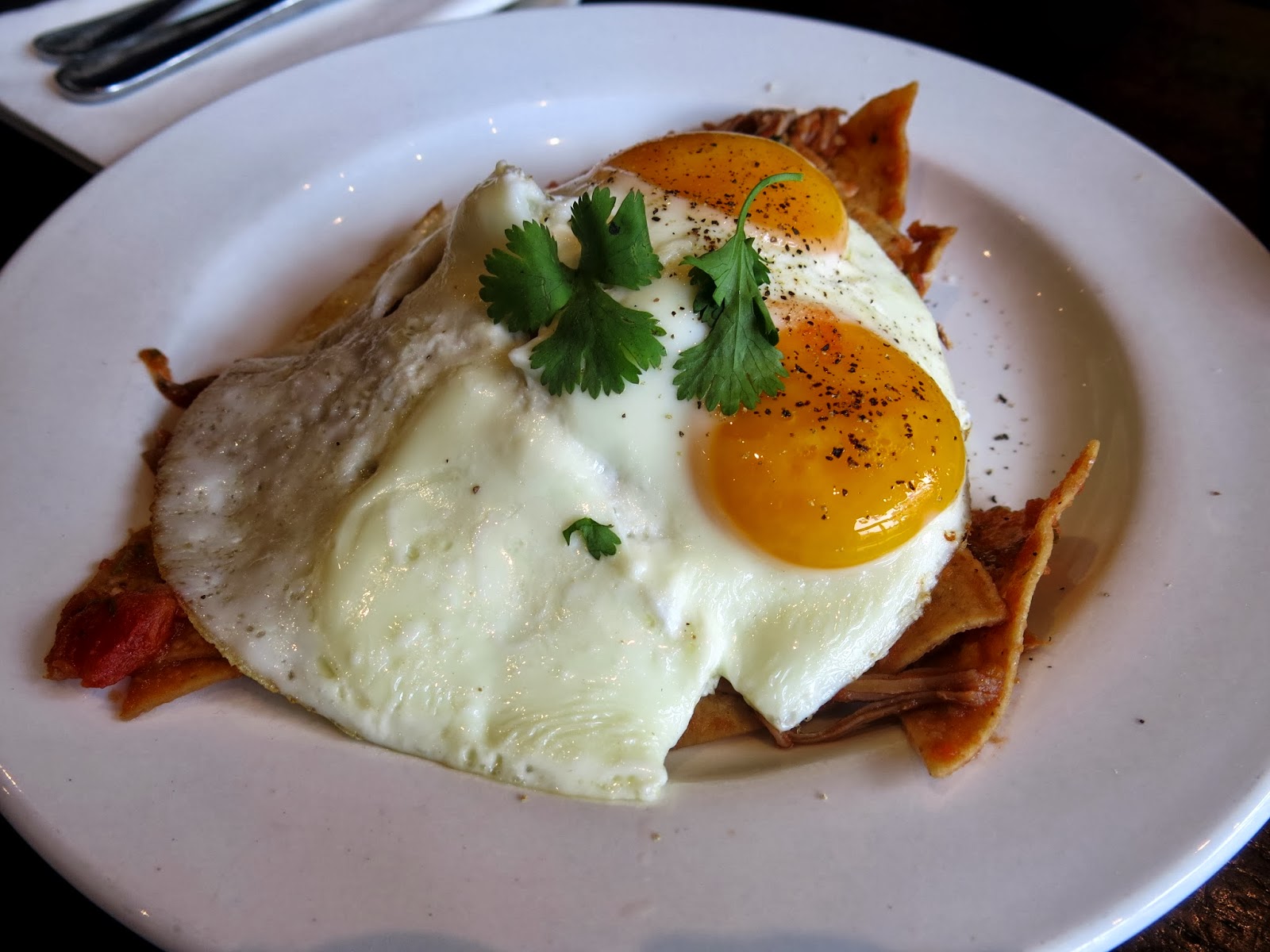 For her savory, Brandy chose the Chilaquiles with Duck Confit.  The dish had a nice mild punch from the salsa on top, countered by a creamy cool note from a little dab of queso fresco.  Though the duck was not as plentiful as she would have liked, the meat was still tender and well seasoned.  The tortilla chips that formed the foundation of the dish had the perfect soft texture, yet retained their integrity, which can sometimes be a difficult state to achieve.  The eggs on top were perhaps the slightest bit over done (the yolks were glossy, but not runny), but served their purpose in trying all of the ingredients together into the perfect hearty breakfast dish.

So enraptured by her dishes for a brief while was Brandy that she completely lost track of the games being played until a mighty roar went up from the crowd.  "What happened?" Brandy asked her neighbor at the bar.  "The Broncos just won!  They're going to the Super Bowl!" he exclaimed.  "Well isn't that lovely," Brandy mumbled, tearing another piece of off her pretzel.  "Say, is that any good?" her neighbor asked.  "It's very good.  Here, have some for yourself, I'll never finish both of these things."  "Thanks!  Want to try some of my fries?  They came with truffle mayo."  "Truffle Mayo?  Absolutely, dear boy!" Brandy exclaimed, reaching over to his plate.

Only one bartender manning both table orders and the substantial bar meant service was a tad slow, but the friendly atmosphere was certainly enough to make up for it.  "I'd gladly make this my permanent football watching pub for the rest of the season," Brandy told her neighbor.  "But the season is over," he said, confused, "There's only the Super Bowl left."  "Oh.  Well then... I suppose I'll just have to come here to watch some other sport.  What do you suggest?"  "Um... the Winter Olympics?"  "Perfect.  See you all in February for Curling and Figure Skating everyone!"  The jubilant crowd, probably still full of cheer from the game, roared in response to her. 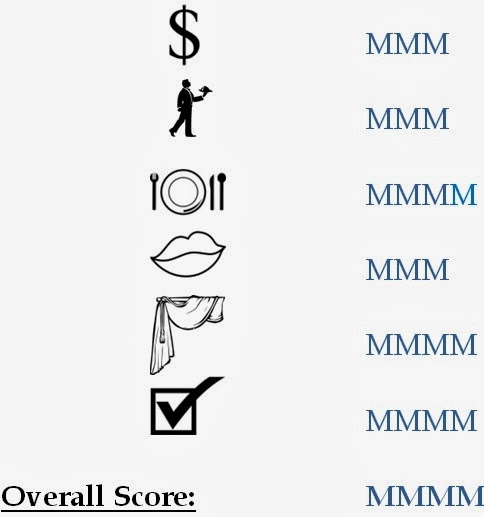