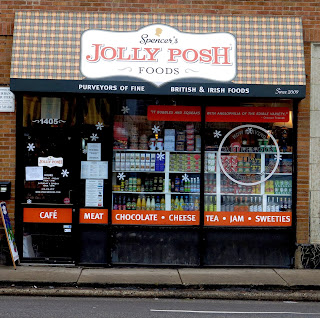 Every year around Christmas, Brandy finds herself growing home sick for dear old Britannia.  "It may not snow as much as Chicago, but there's just something magical about England at Christmas," Brandy often sighs, "Americans don't understand the joy of a lovely mincemeat pie, a plum pudding with hard sauce, or a pre-Christmas panto performance.  For goodness sake, they don't even take off for Boxing Day!  I mean that is just ridiculous.  When else are you supposed to pull all the leftover crackers?" 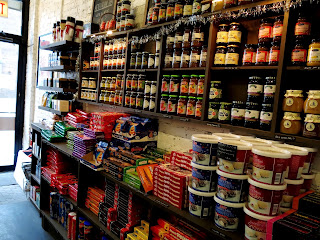 Knowing how down Brandy gets this time of year, her good friend Mama Bee, owner and operator of Honey Bee Bakery, decided to do something about her gloomy attitude.  Luckily, as the well connected honey baron she is, Mama Bee came across a little grocery in Lakeview called Spencer's Jolly Posh Foods, which specializes in English and Irish goodies (she also knew that Brandy had become a bit fan of their British style sausages and bacon via one of the many stalls they maintain at local farmer's markets).  A little more investigating turned up the fact that Spencer's actually houses a tiny cafe, from which they serve sandwiches, desserts, and best of all, a traditionally British cream tea service.  "This is just the thing to take the Briney out of that old Brit and put a little sweetness in her Saxon!" Mama Bee exclaimed. 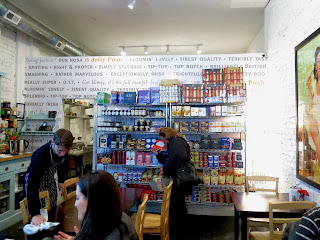 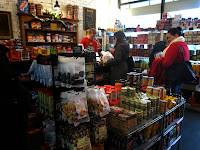 Stepping into Spencer's Jolly Posh was like coming home to Brandy.  At once her eyes lit up at the site of Walker's Shortbreads in nutcracker tins, fridges full of White Stilton and Wensleydale cheeses, English candies like Curley Whirleys and Licorice Allsorts, and even a bin of Fairy Liquid (otherwise known as dish soap to us Americans) in the corner, in other words, every box, bag, jar, and can an Anglophile could ever want for their larder (or pantry).  Though the actual space for the cafe was a little small and cramped, Brandy found it absolutely charming to be surrounded shelves housing boxes of Twining's, curry sauce mixes, Mars Bars, and the like.  Even the condiments left on the small wooden tables seemed to delight her.  "Real HP Brown Sauce!" Brandy squealed with delight, picking up a square shaped bottle. 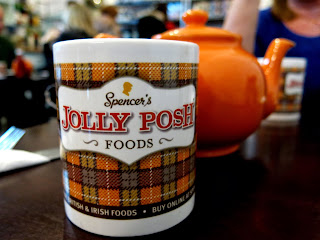 The cream tea started off with a pot of tea, naturally.  Brandy and Mama Bee picked the Winter Spice, a warm and slightly orange scented tea which came served in an adorable orange ceramic pot and two officially branded Spencer's Jolly Posh Foods mugs.  "Well now, I'd thought we'd be getting a porcelain pot and dainty teacups and saucers!" Mama Bee said in slight surprise.  "Don't be silly, dear.  This isn't a high tea, its a cream tea.  Much more casual," Brandy retorted, "We're not in an episode of Downton Abbey.  Now, one lump or two?" 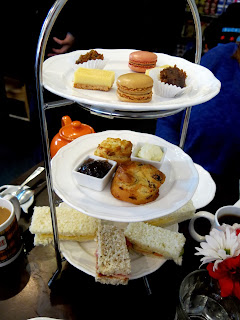 The edible portion of the cream tea came next with three lovely selections served up on a tiered tray; the bottom plate housed a selection of finger sandwiches, the middle two freshly baked scones with pots of strawberry jam and clotted cream, and on top a variety of pastries. 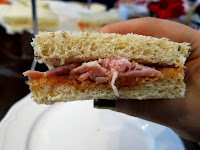 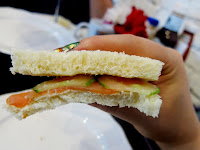 Working their way up from the bottom, Brandy and Mama Bee dived head first into the sandwiches, which came in three varieties: Ham and Tomato Relish, Cheese Salad, and Salmon and Cucumber.  The ham was nice and tender with a good sweet kick from the relish and an earthiness from the soft wheat bread.  The salmon had a subtly smokey flavor and provided a study in contrast with the crisp cucumber.  "This one makes me feel so fancy!" Mama Bee whispered, raising her pinky as she took another bite.  The cheese salad was the favorite of both Brandy and Mama Bee for its rich, smooth flavor from the sharp cheese mixed with a creamy mayo. 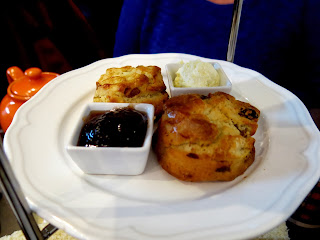 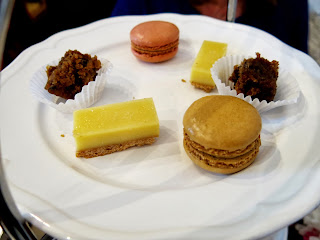 Lastly were the pastries, which consisted of a few French style macaroons, slices of lemon cake, and a little bit of sticky toffee pudding.  The two macaroon flavors they had been given were a raspberry with a beautiful jammy filling and a toffee, which had a buttery, toasted nut flavor to it.  The lemon cake was creamy and smooth with a good true lemon flavor.  Brandy would have gladly eaten more of the sticky toffee pudding, which was just enough for one bite of rich, moist, and buttery goodness.

Though everything had been light and refreshing, Brandy and Mama Bee found themselves pleasantly full from their leisurely afternoon tea.  At only $22 a person, they both thought the delicious little bites were well worth the price, though there was certainly no money spared after the meal as Brandy proceeded to buy at least one of just about everything in the shop.  "Mincemeat pies!  And plum pudding!" she exclaimed, throwing items into her basket, "Now if only they had a boxed panto performance I'd barely be missing Mother England at all!" 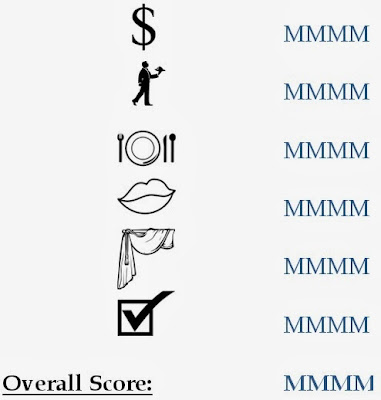