Postcards from Bunny: Bento Box Treats with Takashi at Macy's 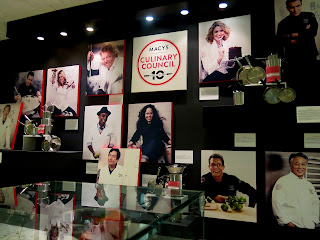 Seeing as how several dozen presidents and monarchs have finished their reigns since the last time Brandy was in any sort of school classroom, its understandable that the "Back to School" season is always somewhat confusing for her.  "What do they mean by back to school?" she often wonders, "The children don't leave school until they are 18 or 22 or 30 even these days, they're constantly in school!  Seems to me, its more the 'End of the Break that's Slightly Longer than All the Other Breaks We Take Throughout the Year Season.'"

To help Brandy be a little more empathetic with the parents of the world, Bunny sent her to another one of Macy's on State Street's amazing cooking demos from a member of the Culinary Council, as it was to be a Back to School themed afternoon with snacks meant for a busy student's lunchbox.  Brandy was a little hesitant at first, but once she learned the star of the day was none other than Takashi Yagihashi, famed for his namesake restaurant in Bucktown and Slurping Turtle in the Loop, she decided to make an exception.  "Normally I don't pay any mind to the young and their goings on, but I suppose this one time, I can stand to learn something." 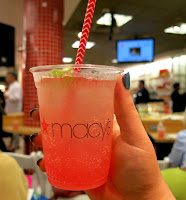 The afternoon started off with a refreshing carbonated cranberry lemonade, garnished with a sprig of mint.  Brandy was three cups into the day before she realized the beverage was non alcoholic.  "I suppose a wine spritzer after school would be a bit of a faux pas," she mused. 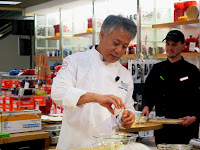 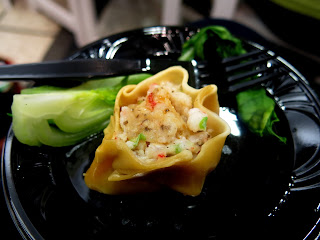 Chef Takashi started off with Shrimp Shumai, a steamed dumpling filled with chopped shrimp, water chestnuts and mushrooms and topped with a soy sauce/mustard dressing.  These perfect little pockets had the a delightfully chewy outside and a tender, salty filling.  Chef paired them with a little bit of steamed bok choy and said that if someone wanted to make a larger batch of them, that they freeze extremely well and could even be deep fried for a more crunchy shell. 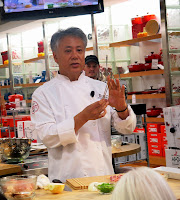 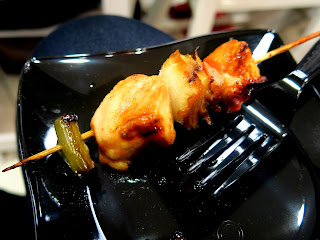 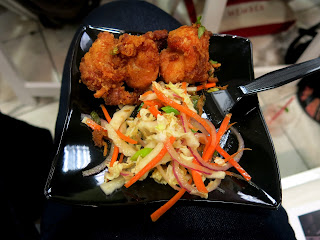 Finally Chef Takashi prepared his famous Chicken Tatsuta-Age, a Japanese style fried chicken served with a spicy Asian Slaw.  Again, the secret to juicy, flavorful chicken was down to the marinade, flavored with garlic, ginger, mirin, and sesame oil.  Chef Takashi advised using potato starch to coat the chicken, as it lent a better crunch and flavor than corn starch once fried. 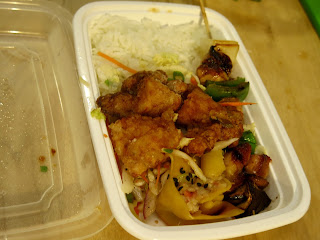 As one last flourish, the chef gave the audience some tips on how to properly steam rice, then assembled a few pieces of all of the goodies he'd prepared into a lovely bento style lunch box, which he said would be sure to make everyone's children "Never want to leave their parents homes!"

At the end of it all, Brandy actually found herself slightly wishing she had some classes to attend just so that she could take with her a fabulous lunch like this one (all of the items Chef Takashi prepared we meant to be eaten at room temperature so no ice packs of microwave were necessary).  But instead, she compromised by buying a brand new rice cooker, a floral backpack ("This will be perfect for carrying my darning supplies to Quilting Club!"), and enjoying a bowl of noodles from Takashi's own Noodles on the seventh floor of Macy's on State Street.  She may not be going back to school any time soon, but Brandy was now happy enough to welcome in the season with the rest of the world.

The writers of this blog have been compensated by Everywhere Society for the information contained in this post, but the opinions stated were not influenced.
Posted by Bunny and Brandy at 9:42 AM