Bel 50 or Waffles are the New Bread 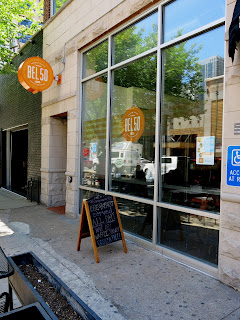 Spring time in Chicago usually mean flowers, sunshine, and a chance for the mole people who have spent the winter months huddled under several layers of coats and blankets to finally emerge into the open, don their exercise clothing, and go running or biking in the park.  But for Brandy, spring means an itchy face, watery eyes, and constant sneezing.  It is inevitable every year that when people say to her, "Isn't it gorgeous outside?" Brandy's only response is a succinct, "Not for me," making her seem to be the grumpiest person in the city.  In reality, Brandy doesn't hate the spring, she would just rather be under the cover of air conditioning, appreciating the beautiful flowers from through a thick plate glass window.  "If it wasn't for my head feeling like its about to explode in a mass of sticky-ACHOO!" she says with a sniffle, "I'd be more than happy to join the young in frollicking through the woods and whatnot."

It was while wandering down the sidewalks of River North in a haze of sniffles and watery eyes that Brandy found herself outside of one of the newest gourmet fast food stops, Bel 50, whose main innovation seemed to be replacing the bread in traditional sandwiches with a homemade Belgian waffle.  Brandy eyed up the rather extensive and promising menu for a few moments before deciding to go in.  "Hopefully the flavors are bold enough that I'll be able to taste the food," she said through her swelled nasal passages. 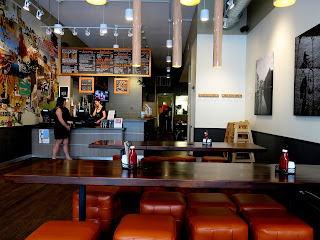 The inside of Bel 50 was interesting, to say the least; the main dining area was dominated by long wooden tables, meant to accommodate all sizes of parties (but in reality probably just serve to cause frustration when smaller parties spread out across them and take up an excessive amount of seats) with square, orange ottomans for seating.  "I usually prefer something with a back," Brandy said, "Hunching forward over the table is bad for digestion.  It's also horrible manners."  The decor was nice enough, with high ceilings making the room feel open and spacious, and the little pops of orange and tan against the wood of the tables created a happy atmosphere without being too oppressive or trendy feeling. 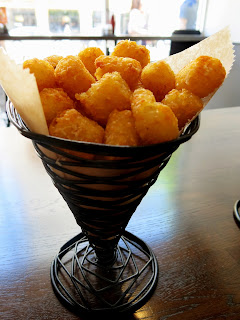 Rather quickly, Brandy was brought her entree and side.  She started off with the Truffled Tater Tots, a novelty she'd surprisingly never seen before.  She felt that the truffle flavor was subtle, but definitely there, and the tots themselves were perfectly crisp on the outside and soft on the inside.  Her only complaint, if one can call it a complaint, was that she had been given so many of them in her order than eating them became a tad monotonous.  She did consider reaching for the ketchup bottle to shake things up a bit, but didn't want to mar the earthy truffle oil flavoring.  "These could use some sort of dipping sauce, though," she mused. 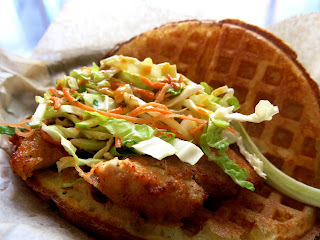 For her entree, Brandy had chosen the Buttermilk Fried Chicken Sandwich with Apple Slaw.  The sight of the sandwich was a little hard to get over, as it appeared to be taco that had been made with a very thick tortilla, but the first bite put all her fears to rest.  The waffle was surprisingly light and crisp and much to Brandy's surprise and delight, actually held together through the eating of the meal.  "I expected it to spew its innards all over the place, but its actually working quite well to contain them," Brandy muttered as she turned the sandwich over in her hands, "I only wish my nose could to the same!"  The chicken was plenty tender, if a little thin, and didn't stay particularly crisp under the weight of the othering fillings, but the honey mustard sauce had a nice tangy and kick to it, and the slaw provided a lovely crispness. 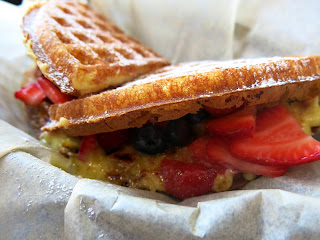 Lastly was the Creme Brulee Waffle, filled with custard and assorted berries.  Again, Brandy was amazed that the waffle held the fillings in rather nicely, and upon taking a bite she detected an unexpected crunch.  "There's bits of caramelized sugar in here!" she exclaimed.  The sugar provided a nice bit of texture and made each bite a little different, as some pieces had a more pleasantly burnt flavor to them than others.  The berries though seemed a little less than fresh and had gone quite soggy in the sandwich.  Brandy couldn't decide it is was due to them being slightly cooked, previously frozen, or if they had been stored in some sort of syrup that robbed them of their freshness, but either way they were a bit of a let down.  The custard too was a bit disappointing, as it seemed a little thin and bland.  "Its more like a zabayon really," Brandy thought aloud, "But we British know a thing or two about custard, and this is not a custard."

All in all, Brandy ended up thinking that Bel 50 could be onto something with this whole waffle idea.  The food was fast, better than what one would expect from say a corner deli, and decently priced (Brandy paid about $20 in all), but in the end little more than an interesting novelty and not a culinary innovation.  "But perhaps I should try replacing all my bread with waffles," Brandy wondered as she sneezed her way out the door, "It would certainly make for more interesting croutons in my salad." 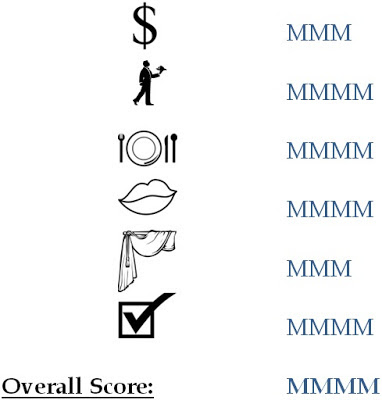