Lula Cafe or Home of the Haute Made 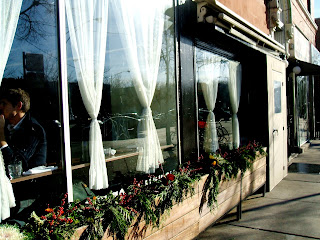 Its a funny old world, this.  At the beginning of the 20th century, it was all industrial this and mass produced that.  The life of instant and convenient, in a sense the push button ideal of the 1950's, was what once was accepted and appreciated, especially when it came to food.  Open a can and instant side dish.  Throw a frozen bag of food into the microwave and you have pasta for two.  And then there's the worst perpetrator of all: instant coffee.  But it seems that, as every generation rebels against the previous one, we are now moving towards a more handmade, home grown, and artisan existence.  This is an age where the spice rubs in your cabinet have all been hand blended, the wine in your glass was cultivated by a tiny vineyard in Virginia, and even your coffee's package tells you what specific farm in which part of the world harvested the beans. 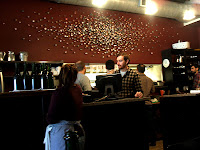 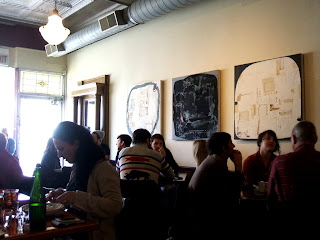 Brandy, in fact, is all for the artisan movement, so much so that she makes everything herself that is humanly possible.  Toothpaste?  Home made with baking soda, salt, and peppermint extract.  Shampoo? Some essential oils, soap, and beer.  Her candles are hand poured, her throws crocheted, her pillows embroidered, and even her furniture has been carefully hand crafted (from broken bits of other furniture.  "Nothing can break because its already broken," as Brandy likes to say).  So when Brandy got a tip from one of the darling chefs at ING that Lula Cafe was one of his favorite breakfast haunts because of their hand crafted goodness, she just had to check it out. 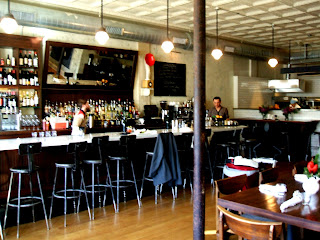 Lula Cafe, being one of the most well known brunch spots in all of Chicago, had been a place Brandy kept putting off visiting for quite some time ("I would rather create the fashions than wear them," as she puts it).  The inside of Lula Cafe did nothing to squelch their hip reputation: industrial chic tin ceilings and exposed duct work were matched with dusky wall colors and some modern looking black and white textured paintings.  The first room was open and sunny with a long bar and a few tables, while the back was a little more cramped and dark, but still comfortable enough. 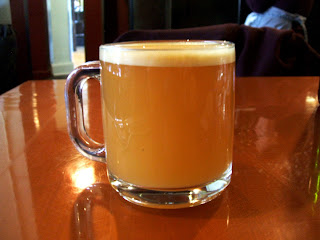 Brandy started off with a cup of Spiked Hot Ginger Apple Cider.  Her casually dressed young waiter smiled knowingly at her order and said, "Good choice."  The drink arrived in no time, presented in a clear mug that showed off its buttery color.  The drink had a bitter bite to it at first, but a nice sweet finish, and was generally light and warming. 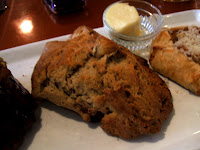 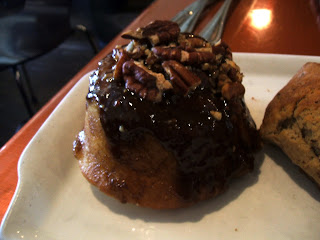 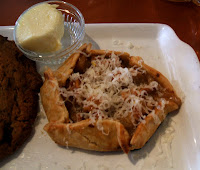 The menu did indeed boast many in-house made items, especially the side dishes like made-from-scratch varieties of sausages and jams. For a little snack before the main event, Brandy scanned the list of pastries (made fresh in house every day of course), which came in three varieties.  First there was the Apple and Goat Cheddar Crostatta, a lovely little open faced tart filled with baked apples and topped with a fine shred of cheese.  Brandy found the crust nice and flaky and the apples a little sweeter than anticipated, but nicely balanced by the mildly salty cheese.  Next was the Chestnut and Chocolate Scone.  Being an expert on scones, Brandy thought the texture had been nailed: crunchy and caramelized on the outside, soft, crumbly, and moist on the inside (so moist in fact that Brandy all but ignored the made in house butter that had been provided).  The chocolate was a nice rich touch, not adding too much sweetness, but the chestnuts seemed to add an odd sort of brininess that wasn't entirely pleasant.  Lastly was the Smoked Pecan Sticky Bun.  Brandy just loved the smokey nuts that topped the rich caramel sauce and the buttery pastry, devouring the whole pastry before she even realized it. 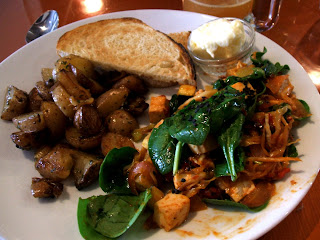 Her main course consisted of the Tofu and Vegetable Scramble, here served with potatoes and sourdough toast (which Brandy suspected was also made in house).  The potatoes, though very well seasoned with herbs, were a bit too oily for Brandy's taste (she usually prefers a crisper spud).  The scramble (or stir-fry, which is more what it resembled) was coated in a rather tangy miso black sesame sauce that Brandy had thought at first glance was going to be spicy  but really wasn't.  Brandy did find the mix of vegetables fresh, crisp, and a good contrast to the soft tofu.

For such an artisan brunch a price of about $30 is pretty fair, and with excellent service from the flock of young and attentive waiters, Lula Cafe's reputation held up on that day.  With a belly full of hand crafted goodness, Brandy set off for home to pour some bars of soap and finish knitting scarves for various Christmas presents. 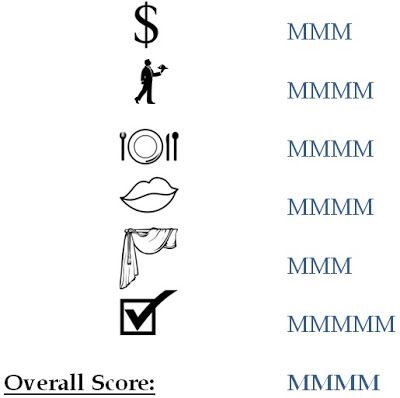