Hamachi or Seems Kosher to Me 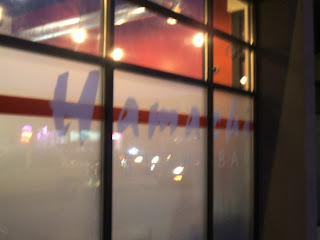 Brandy does love a good challenge.  She has climbed mountains to prove points, won scavenger hunts for bragging rights, and once in her youth she ran with the bulls in Spain purely because a stranger in a cafe had remarked to someone who was not Brandy that he doubted a woman could do it (what he actually said, it turned out, was he doubted that a wounded man could do it, but Brandy's hearing has never been what it should be).  So when Brandy's dear friends Bailey Blue and Hawke from Cider Press came to her with a difficult request, she was more than happy to meet it head on.  "We need to find a kosher sushi restaurant, preferably on the north side," Bailey told her, "Hawke is thinking about keeping kosher for his health, but doesn't want to give up his favorite foods, like sushi and cheeseburgers and bacon."  "I don't know about the cheeseburgers and bacon, but I think I can take care of the sushi," Brandy said with confidence. 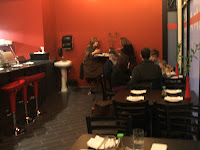 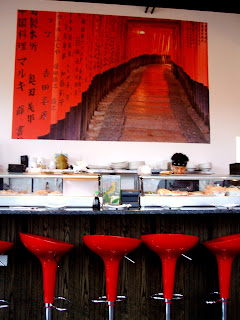 Luckily, Brandy had recently received an invitation to Hamachi in Roger's Park, which also just happened to be an all kosher sushi restaurant, so she organized as afternoon tasting for the three of them.  Hamachi's interior was filled with classic colors: reds, black, and whites all stood out in stark contrast with each other, culminating in a beautiful mural on the wall behind the sushi makers.  The space was a little cramped, but the seating was fairly varied with counters under the windows on one side, stools in the middle where one could watch the sushi making action, and larger tables along another wall.  "So how does kosher sushi happen?" Hawke inquired as they took a seat.  "I'd imagine about the same as regular sushi, only without shrimp or crab," Brandy responded, eyeing a few interesting looking roles on other people's plates. 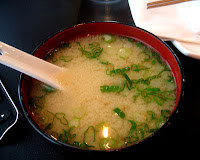 The table was first presented with some bowls of warming Miso Soup.  Brandy thought the broth was just perfect: not too salty, oily, or bland, but a little unconscious, a little creamy, and loaded with umami. 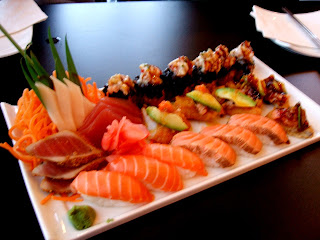 A plate was then brought to the table, boasting the best of the best appetizers on the menu,  including a selection of sashimi and nagiri and some more adventurous rice based bites like the Nasu Tempura (which consisted of eggplant, spicy salmon, and mango salsa) or the Crunchy Shrimp (with faux shrimp, spicy tuna, and a sauce made from bell peppers).  "I can't believe its not shrimp!" Hawke exclaimed when Brandy reminded him of the culinary trickery in the tidbit, both of them fumbling a little bit with their chopsticks and desecrating the lovely food in the process.  The favorite of the group was most certainly the Crispy Rice, which came topped with salmon and pineapple salsa.  "Crispy rice indeed!" Brandy proclaimed happily, "I'd take this over those saccharin marshmallow things any day!"  The slices of fish they had been provided with were incredibly tender, practically melting on the tongue.  Brandy liked tasting the subtle differences in the preparation and type of fish from bite to bite, favoring the white tuna out of the bunch. 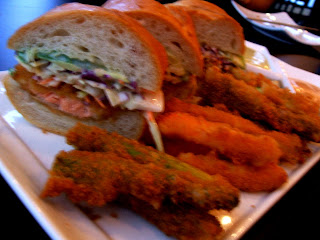 The next plate presented to the table was rather surprising.  "Sandwiches and fries? At a sushi place?" Bailey said as the plate was set before them.  Brandy smiled quizzically at the soft spoken waitress as she explained the dishes, then the three diners dived in.  The sandwich, it turned out, was a Katsu Salmon sandwich, a fried filet of salmon topped with avocado, mayo, and coleslaw.  "I admit, I've never seen something like this as a sushi restaurant, but I would like to in the future," Brandy said through a mouthful of sandwich.  The salmon had a nice crunch to it, mixing well with the sweetish cole slaw and the soft bread.  What Bailey had thought were french fries turned out to be traditional Tempura Vegetables, served with a Wasabi Mayo and a Spicy Mayo.  They found the veggies to have a nice fresh texture on the inside, and the crunchy exterior was free of any greasy residue that can sometimes come from inexpertly prepared fried food.  "Look, it is a fry after all!" Bailey piped up as she bit into a stick of sweet potato.

The third plate of food brought some of Hamachi's signature rolls to the table in a stunning array of color.  Firsty was the Black Spider, made with black rice, faux crab meat, avocado, cucumber, and topped with salmon and a sweet soy sauce.  The group found this one to have a savory slant from the nuttier black rice and a slight tanginess.  Next was the Baked Madai, which had faux shrimp and crab, asparagus, avocado, and came topped with red snapper and a sweet soy sauce.  Brandy especially liked the subtle sweetness of the sushi and found it a little more filling and heavy than the other rolls.  The White Sox roll, a mix of tuna, avocado, cucumber, mayo, and a special garlic black sesame sauce, was the unanimous favorite of the bunch because of its spice, sweetness, and all around refreshing flavor.  Then there was the Red Dragon, a surprisingly creamy, sweet, and not overly spiced mix of faux crab and vegetables.  Last but not least was the most stunning of the sushi, the Blue Man Group, a mix of tuna, salmon, and avocado coated in a mysterious mixture called "blue crunch."  This roll had the most spicy kick to it, but it was still well executed and not about to light anyone's mouth on fire.  Sadly though, the blue crunch was a little less crunchy than expected. 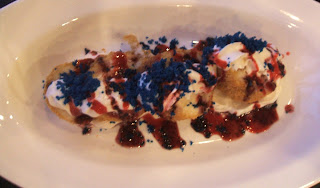 Lastly, the group was presented with dessert, Tempura Ice Cream.  The sight of the dish brought a little patriotic tear to Hawke's eye, as it was topped with a bright red strawberry sauce and more of the "blue crunch."  "All it needs is a few sparklers," Brandy smirked.  Inside the crispy coating was a smooth vanilla ice cream and a little pound cake, which made for a slightly grainy texture, but the dish was so fun that no one seemed to mind, and the plate was soon scraped clean.

Though kosher sushi isn't what one would normally think of for brunch, Brandy and friends had a wonderful time at Hamachi, and left thoroughly stuffed.  "So, are you still thinking of going kosher, my boy?" Brandy asked Hawke as they all waddled down the road.  "Still not sure, but its good to know I have options," he smiled.  "I wasn't even thinking of keeping kosher," Bailey said, "But I could definitely live off that sushi for the rest of my life." 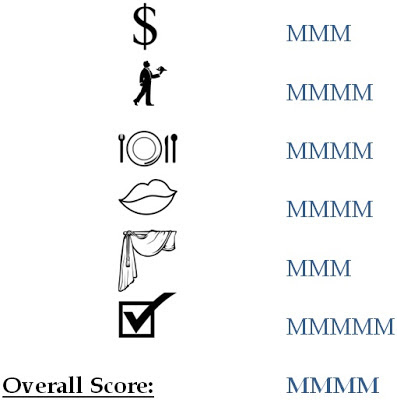 * The writers of this blog were invited by this restaurant and provided with a free meal in exchange for a review.  The opinions of the writers have not been influenced by this transaction.
Posted by Bunny and Brandy at 9:42 AM