Fabcakes or The Ladies Who Brunch 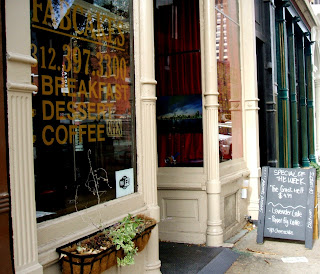 There are three types of people in this world: those who brunch for fun , those who brunch for fashion, and those who brunch in order to cure a hangover.  Brandy has always prided herself on being one of the first kinds of person (and occasionally one of the third kind), but never one of the second kind.  "Brunch is about togetherness, friendship, enjoying good food and good conversation, not about whose wearing the fanciest bloody hat," Brandy has been known to extemporize, "I can't stand the kind of woman who buys a new pair of shoes and a designer bag just to wear out to brunch.  They only go to the most fashionable places, not to taste, but to be seen.  It's contemptible." 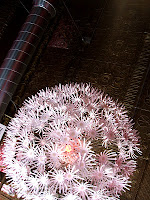 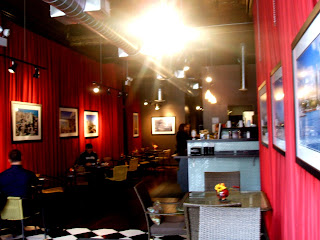 But there are times when even Brandy wants to impress, especially when Mama Bee is in town, so for this week, she decided on a little boutique bakery called Fabcakes in the River North neighborhood (this was a place that Brandy felt for sure would not disappoint Mama Bee's insatiable need for honey).  Inside, they found a very whimsical yet chic interior with large patio tables sets scattered around the room, Gothic looking red curtains hung over the unfinished brick walls, and an antique and very ornate tin ceiling ("I had a ceiling like that in an apartment I had in the 20's," Brandy said, to which Mama Bee inquired, "Your 20's dear?" and Brandy replied, "No, THE 20's.").  The overall effect was a sort of Alice in Wonderland feeling, which Brandy very much liked in the context of a bakery. 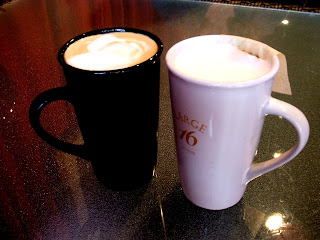 They first approached the small display case at the back of the shop and examined its wears, deciding on a little tea and conversation before they broke into the sweets.  Brandy ordered a Georgia Peach Tea Latte, which was made fresh from the jar of loose leaf tea on top of the display case, while Mama Bee chose a Hazelnut Latte.  "Oh, let's get a spot to eat!" Mama Bee insisted after a little while, and they once again went to the back of the shop to examine the menus.  For a few moments, they stood behind two very fashionable looking women who were all in black and were barking questions at the poor sweet thing behind the counter.  "Is the coffee all organic? Fair Trade? Dairy free? Gluten free? Caffeine Free?" asked one of the women, not even letting the girl answer one question before asking the next.  Once she was satisfied that her coffee had nothing but actual coffee in it, the next woman began her barrage of specifications.  "I want a fruit tart, but one with only one or two blueberries.  Make sure to warm it, but not too much.  And I don't want one with too much glaze.  The sugar will make me too jittery."  Brandy watched as these two took up a table next to the window and proceeded to place on their large, darkened sunglasses and take tiny sips from their drinks while complaining loudly about the weather, causing Brandy to growl under her breath. 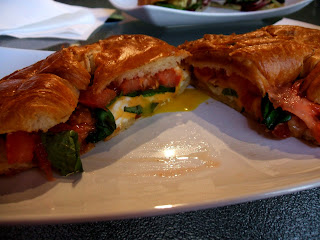 Mama Bee decided on an egg sandwich with tomato, basil, cheddar, and bacon on a croissant.  All of the ingredients tasted deliciously fresh, and looked it too, making a rather pleasing array of color inside the soft and buttery croissant.  Mama Bee was especially impressed that the croissant held together rather nicely, as most sandwiches made from the delicate pastries end in messy disaster. 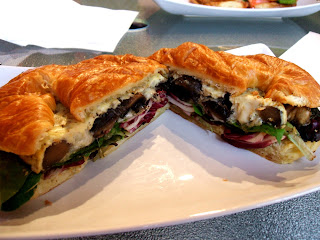 Brandy also got a croissant sandwich, but hers housed a frittata cooked with mushrooms, Swiss cheese, and thyme.  The flavors of the sandwich were spot on with the earthy mushrooms mixing perfectly with the herbiness of the thyme and the richness of the cheese and egg.  Brandy was also impressed by how well the sandwich was put together, and also adored the way the utensils were presented in a simple napkin and tied up in a red yarn bow. 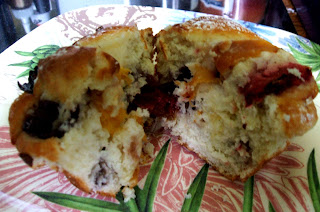 At last, the ladies decided to split a little dessert, a Chocolate Coffee Buttercream Cake which resembled a multi layer opera cake in cupcake form.  The buttercream was at once rich and airy, tasting entirely of coffee with none of the bitterness that flavor can sometimes impart.  The cake was equally rich and moist and had a surprise layer of marinated cherries in it, indicating a sort of nod at black forest cake. The fashionistas at the table next door sneered at Brandy and Mama Bee, nibbling their pastries with as little food going into their mouths as possible.  Growing frustrated with these two, Brandy stood up and announced  "I'm getting some pastries to go!  This food is too good to let it only last for one meal!"  To which Mama Bee enthusiastically cheered, "Here here!" 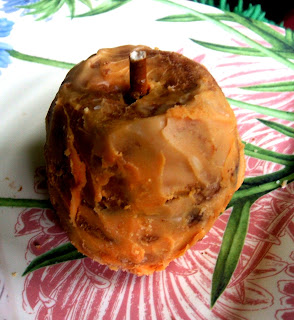 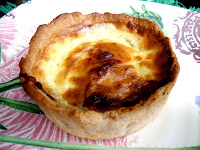 Brandy approached the harried looking girl behind the counter and started ordering whatever her eyes landed on.  She ended up with a rather interesting, but delicious assortment, which she and Mama Bee enjoyed the following day in the comfort of Brandy's parlor: There was a bacon and mozzarella quiche that had a crumbly crust and a nice meaty flavor, but was a little short on the egg and cheese, making the baked good more of a tart than a quiche.  Also, there were the delectable Mixed Fruit Muffins, which were doughy and not too sweet, with beautiful fresh berries and stone fruits baked inside.  Lastly there was the Nutella Pumpkin, a sort of creatively costumed cupcake with a small, delicate crumb and a lovely hazelnut ganache in the middle.

In all, Brandy absolutely adored Fabcakes for their bold, clean flavors, their reasonable pricing, their originality, and their excellent service, but the fact that they seemed to be a rather fashionable spot for a quick breakfast didn't even factor into her rankings.  "Even the most expensive bag will stain with chocolate, and I'd rather have a cheap, stained bag filled with cupcakes than an empty designer one," as she put it. 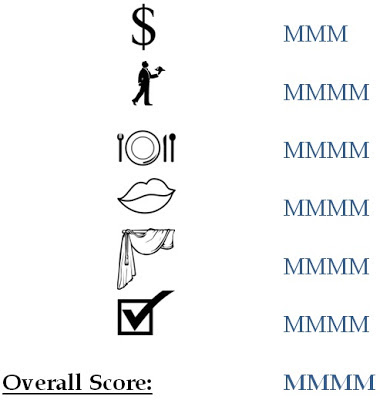