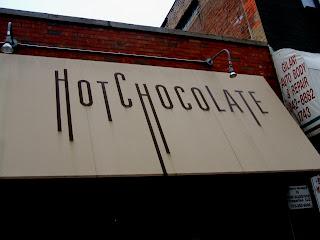 It isn't often you meet someone in Chicago who actually like the cold and the snow.  Who among us truly looks forward to digging out parking spaces, putting on five layers of clothing, or sloshing through the street slush?  Well, if there is one thing in this world that Brandy loves without complaint, it might be winter weather.  Snow?  "Nature's glitter," she calls it.  Bone chilling cold?  "You can always put more clothes on, but when its hot, there's only so many clothes you can take off without causing a riot."  In fact there is little anyone can do to convince Brandy that there is anything bad related to winter weather. 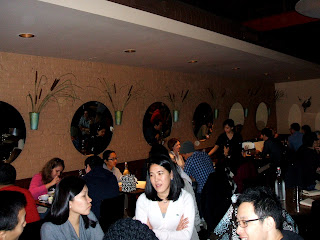 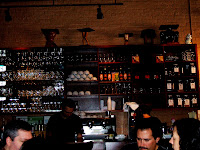 Since the snow and cold are still a little while off, Brandy decided to wish them into being by going to brunch at Chicago's favorite dessert bar, Hot Chocolate, the brain child of multiple James Beard Award winner Mindy Segal.  It's funny, for as well known as this establishment is, there are more than a few people who don't realize that they serve anything other than dessert, let alone weekend brunch and dinner every night.  Accompanying Brandy was her old friend, Biscuit Brown, who sat with her in the lovely lounge like waiting area while a table was prepared.  In the intervening 15 minutes or so, Brandy and Biscuit admired the interior, which was done in simplistic chocolate, caramel, and cream shades and dotted with extraordinary original art works. 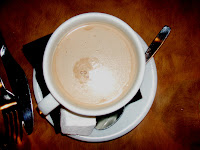 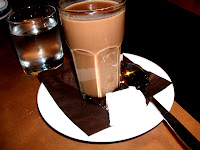 After being seated at their table (which was a bit of a tight squeeze) Brandy and Biscuit set about ordering their cups of hot chocolate; for Biscuit, the Pumpkin Spice, and for Brandy the Black and tan (a milk chocolate hot chocolate with hot fudge at the bottom).  Both were rich and delicious, with a velvety smooth texture, and both came served with a house made marshmallow.  The Black and Tan was served in a slightly smaller portion (which made $6 a cup seem a little over priced) but the richness of it made it perfect for small sips.  The Pumpkin Spice was truly extraordinary, bringing not only the "spice" portion of flavor, as so many other pumpkin drinks do, but also a true pumpkin taste. 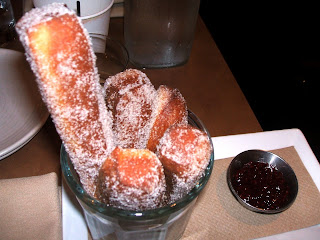 For starters, the ladies split some Warm Donuts, which came served like cinnamon sugar covered breadsticks, perfect for dipping into the bright, house made raspberry preserves.The donuts weren't as melt in your mouth as Brandy would have expected, but in fact they were almost cake like, which wasn't necessarily a bad thing. 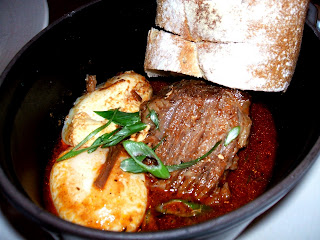 For her entree, Biscuit chose possibly the most interesting and non-traditional brunch item, the Braised Beef Brisket, a tender hunk of meat served in a flavorful broth with two eggs and some fresh made bread.  Biscuit could hardly even scoop up the beef, it was so tender, and the broth was incredibly rich and warming, which only became richer when the yolks of the eggs were mixed in.  "It's so rich, I wager I could pan for gold in it and come up a millionaire!" Biscuit exclaimed. 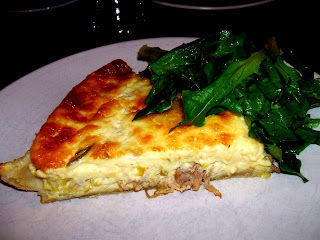 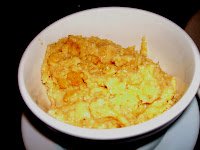 Brandy chose the Duck Quiche with a side of grits.  Another $6 for the side of grits again seemed like a lot, but this time the portion matched the price.  The grits were very creamy and peppery with just a little bit of crunch, which is just how Brandy likes them.  The quiche, which came in a huge slice with a small salad of greens on the side, was lighter than air with an almost invisible buttery crust.  Compared with the fluffy custard of the egg, the hunks of smokey duck meat and nuggets of cheese were like hidden treasures.  Even the little salad of greens was nicely dressed and refreshing.
A relaxed atmosphere with fine dining sensibilities, the service at Hot Chocolate could have been a little friendlier, but food came warm, on time, and the napkins were even found folded when Biscuit and Brandy returned from the restroom.  And while the prices may have been a tad on the high side, one is definitely paying for quality and quantity at Hot Chocolate.  Brandy briefly considered ordering another one of the signature hot chocolate drinks, but with a stomach full to bursting, she decided against it, choosing instead to wait for that magical first snow to return for her next cup of chocolate brilliance. 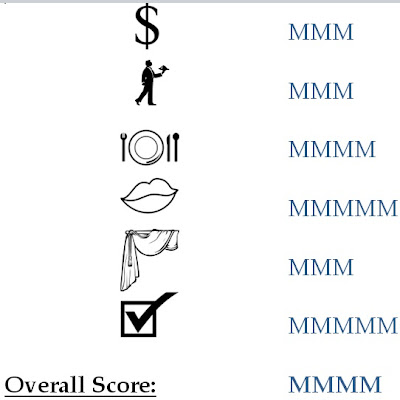